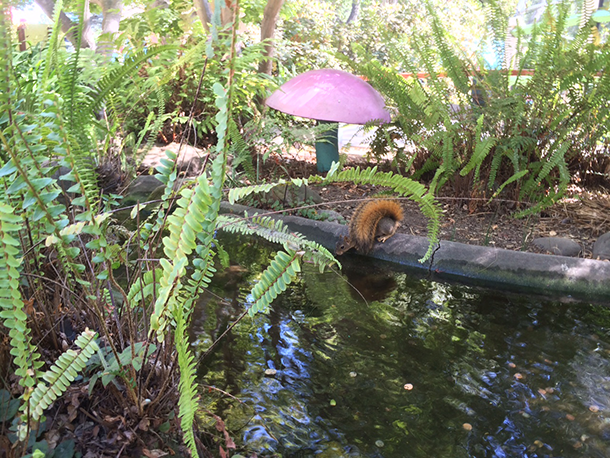 Cute fox squirrels in California’s Fairyland amusement park aren’t playing nicely, but rather wreaking havoc by stealing food and chewing up water lines. Park managers are not amused, and they are turning to animal control scientists to rein in the aggressive squirrels and return harmony to Fairyland. Youth Radio’s Meaghan Baus reports.

CURWOOD: It's Living on Earth. I'm Steve Curwood. Children’s Fairyland is a historic amusement park inside the nation's first wildlife refuge at Lake Merritt, surrounded by bustling downtown Oakland, Calif. This unique, urban utopia has attracted guests with its storybook charm since 1950 – it even inspired Walt Disney and his Disneyland. But recently, Fairyland has been overrun with aggressive fox squirrels, reddish rodents that are twice the size of the familiar grey squirrel - and seem to know no boundaries. Youth Radio’s Meaghan Baus has our story.

BAUS: Beatrix Potter’s Tale of Squirrel Nutkin opens like this.

STORYTELLER VOICE: “This is a tale about a tail—a tail that belonged to a little red squirrel, and his name was Nutkin. He had a brother called Twinkleberry, and a great many cousins: they lived in a wood at the edge of a lake.” 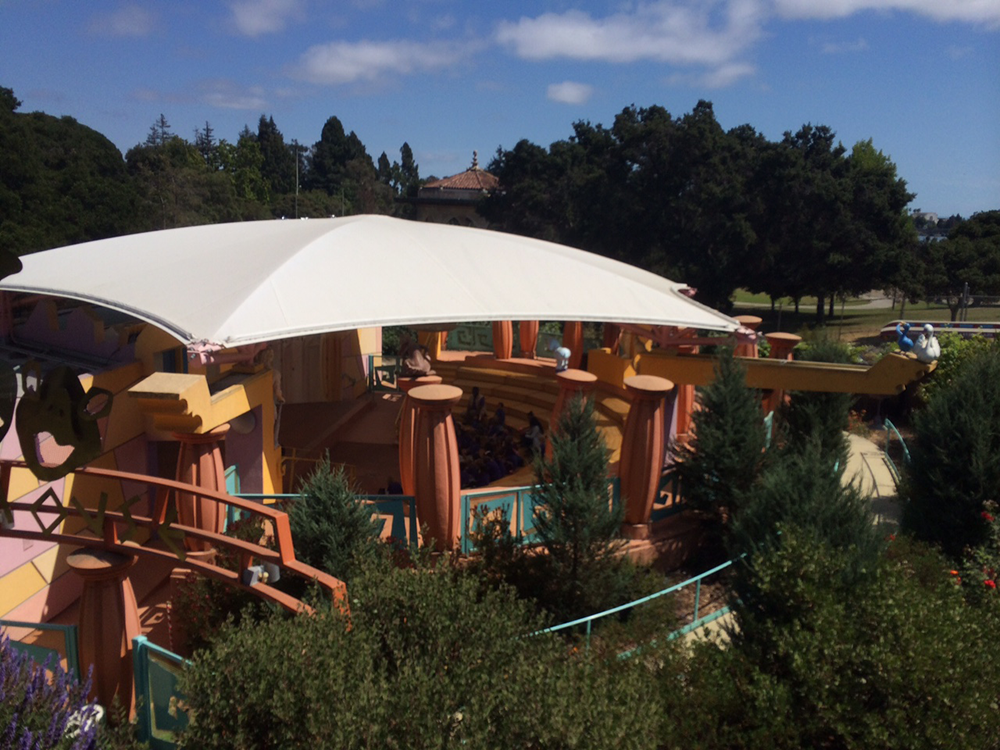 Looking out over Fairyland, surveying for squirrels. (Photo: Ike Sriskandarajah)

BAUS: Here in Oakland, in the wood, at the edge of Lake Merritt, is a place where fairy tales like Potter’s come to life. You can walk through the Alice in Wonderland maze, ride the mini choo-choo train, and visit that shoe where the old woman lived.

BAUS: There’s even a population of cuddly woodland creatures that call this park home.

KID: I saw a squirrel.  [BAUS: Do you like the squirrels?] Yeah!  [BAUS: They’re friendly and stuff?] [CHILD LAUGHS] Yeah! 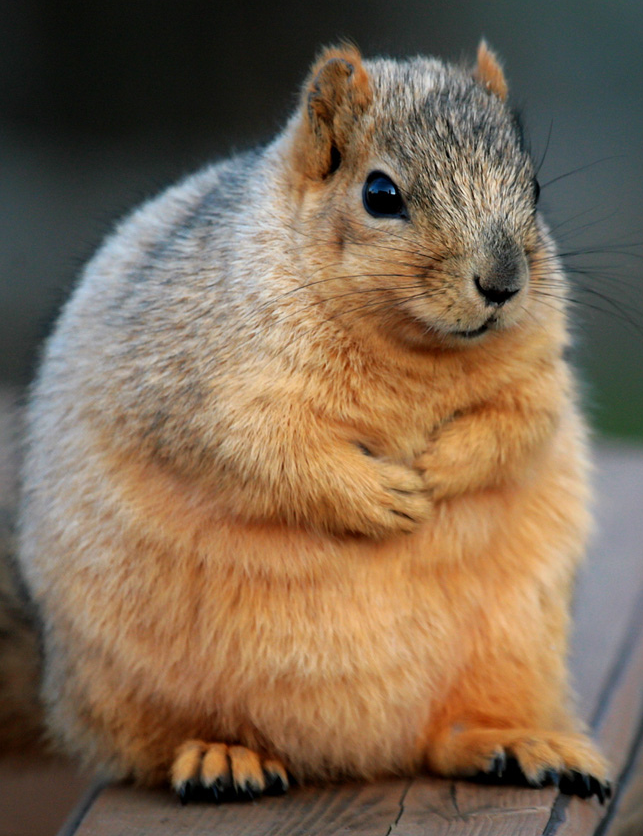 An overweight fox squirrel that can be found in Fairyland intimidating guests for their food. (Photo: James Marvin Phelps; Flickr CC BY-NC 2.0)

GRIFFEN: At Children’s Fairyland we have a lot of squirrels that come out because of the food that we feed them. I’ve never ever seen as many squirrels anywhere else but here at Children’s Fairyland in Oakland. [BAUS: Are they aggressive?] Yes, because they will go into someone’s stroller and get some food. They will come up to you when you’re eating. So you can’t eat at certain rides.

BAUS: According to one mother in the park, Malinda Derouen, they’ll go after adult targets too.

DEROUEN: I just kept backing up and the next thing I knew I looked away and this squirrel jumped on my pant leg and started crawling up me. And I like shook and got freaked out and the people around me were like “woah” and all these other parents couldn't believe it. They’re just very very aggressive here. They’re kind of chunky too.

BAUS: It’s more than just a case of spooked Moms and lost cookies. The executive director of Children’s Fairyland, CJ Hirschfeld, has assessed the damage, parkwide.

HIRSCHFIELD: They are destroying our irrigation lines on a weekly basis so that my team needs to come through and repair them on a weekly basis. Some people may not realize that - it sounds kind of awful - they eat the faces off of our - Mary Mary Quite Contrary - so that so that our art and restoration department is constantly having to do repairs on sets because they will eat through that.

BAUS: Over the last couple years, Hirschfield estimates that the squirrel scourge has gotten pricey. 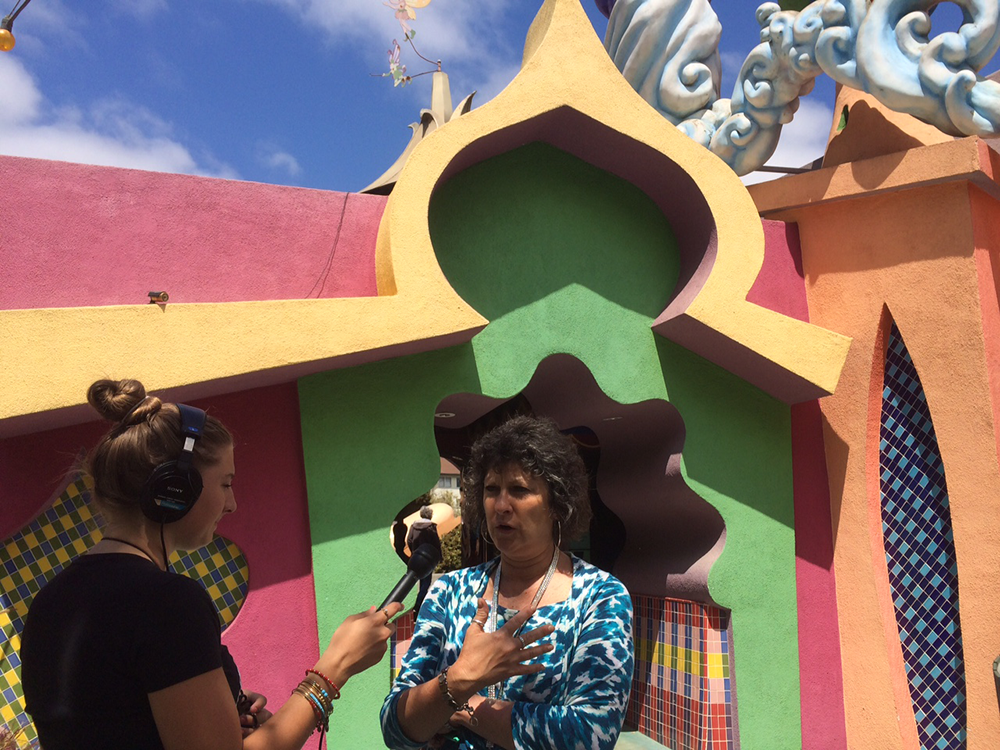 HIRSCHFIELD: It’s definitely in the thousands, probably over time in the tens of thousands of dollars. You know this is a controversial issue. We love animals but we really feel we need to figure out a way to get a handle on this problem.

BAUS: So, she’s turned to the pros to help figure out a humane way to address the overpopulation. David James is an ecologist with the Alameda County Vector Control, with two decades of experience under his belt.

JAMES: What you’d have to do is live trap them - put the traps out when nobody is around and then once you’ve trapped them, there’s actually a little straightjacket. It’s like a little conical sleeve they run into it and you can trap them in there. And you can do the injections and release them.

BAUS: Some of the squirrels could be trapped and injected with a serum that stops them from reproducing, some could be exterminated. The other part of the plan is on the humans: locking down food sources, and training all park goers that even though it’s really fun, you can’t feed the squirrels. 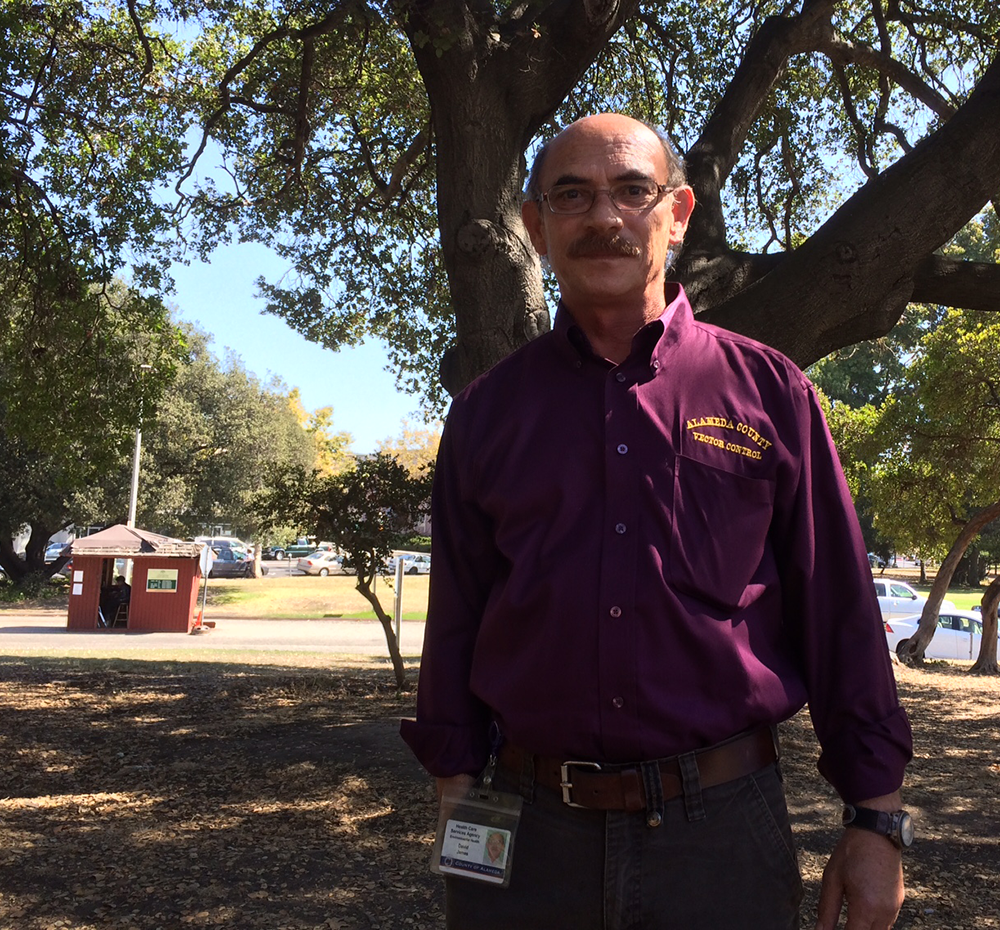 JAMES: then over a couple of years you will see a reduction, and hopefully that’s an acceptable level. Obviously we don’t want to get rid of all the squirrels, because people like squirrels, they are cute and have little fluffy tails.

BAUS: And they are cute. The fox squirrels, with their reddish fur and big cheeks, are kinda nice to see around.

BAUS: In Beatrix Potter’s story, squirrel Nutkin is trapped by an old owl. For the squirrels of Fairyland: straight-jacket traps by the Vector Control.  Sometimes reality is stranger than fairytales.

For Living on Earth, I’m Meaghan Baus, in Oakland.

CURWOOD: That story was produced by Ike Sriskandarajah of Youth Radio.