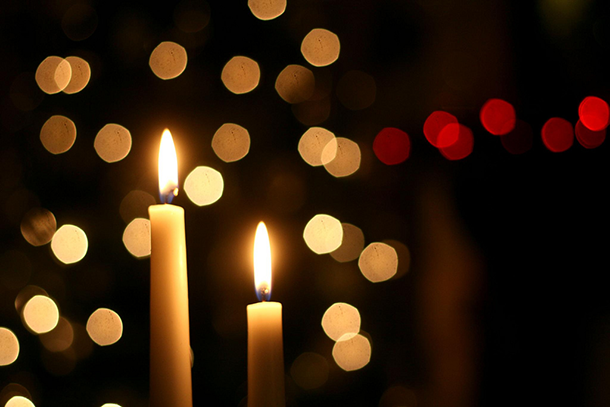 On Christmas, the windows in Jay O’Callahan’s childhood home were each dressed with a white candle—a sign of hope and peace for the season and the New Year. (Photo: Anne; Flickr CC BY-NC-SA 2.0)

Master storyteller Jay O’Callahan joins host Steve Curwood to share some tales about his family during the holiday season. O’Callahan recalls his community’s tradition of Christmas caroling and how it brought hope to his mother in a time of darkness and for Christmases to come.

CURWOOD: From the Jennifer and Ted Stanley Studios in Boston and PRI, this is Living on Earth. I’m Steve Curwood. This time of year when the sun is lowest in the northern sky and the days are short, we take a break from the often urgent pace of environmental news and information to celebrate life with some stories and songs, as folks gather at home for the holidays. So make yourself comfortable. Maybe throw another log on the fire, or perhaps get out of the passing lane, and get ready to enjoy wonderful performances, starting with a true journey to hope and fulfillment with master storyteller Jay O'Callahan.

CURWOOD: Jay O'Callahan is no stranger to Living on Earth. Jay tours nationally, bringing his stories to a wide variety of audiences, and we're so glad to have him back to celebrate the holiday season. Great to see you.

O'CALLAHAN: It's wonderful to be back.

CURWOOD: Our theme is “Home For the Holidays,” and, Jay, you have a personal story about home and family when you were growing up with you and your sisters and you went caroling.

When I was a little boy, Christmas Eve was very special. My sisters and I would run down the outside back stairs. It would be dark and cold. We'd run halfway across the street, and we would turn and look at our house. It was a big old house and it would be dark, but there would be a lit candle in every window. My sister Maureen would do it with my dad, and Maureen never forgot things. It would take our breath away.

Then we'd run across the street to the Graham's and Dr. Graham would take us Christmas caroling. Maybe 12 of 14 neighborhood kids. We'd go all over the neighborhood. Dr. Graham was the director of the Faulkner Hospital in Jamaica Plain - that's in Boston - and he would work seven days a week, ’til 10 o’clock at night, but a few days before Christmas Eve he would come home early. He would gather us all in the living room to conduct us. Music was very important to him. He would bend over and conduct with his hands and his eyes and we would sing [SINGS QUIETLY] Venite adoremus. Then he would stand up a little straighter [SINGS A LITTLE LOUDER] Venite adoremus. Then he’d stand all the way up [SINGS LOUDLY] Venite adoremus. We felt very important. 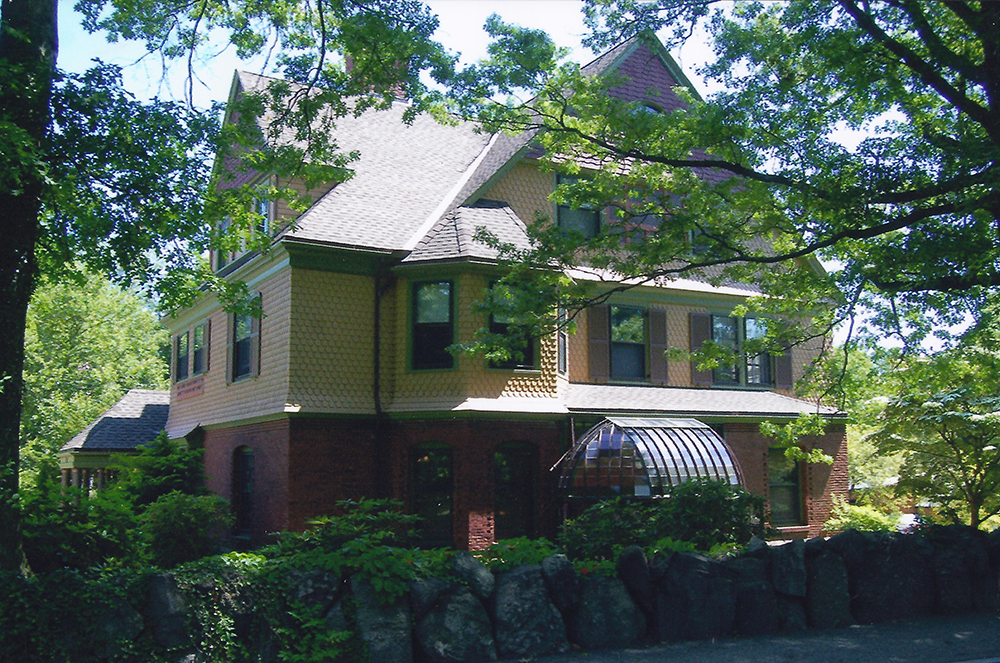 Jay O’Callahan’s boyhood home in Brookline, MA, described in his “Christmas Candles” story. On Christmas Eve, the house would be entirely dark, except for one white candle in each window. (Photo: Bill Kennedy)

But then came the Christmas Eve when everything was different. My mother, usually full of energy, she was tired that day and she was pale. Three days before she’d given birth to my brother Christopher. Christopher! I had three sisters and now a brother, Christopher. He had this big name, “Christopher.” I had this little name, “Jay,” but he was Christopher. I could imagine Christopher coming home wearing his diapers carrying the car. "Christopher's home!"

But Christopher didn't come home. Something was wrong, maybe it was his heart. So mother was worried all that Christmas Eve day. Daddy was out shopping with Uncle Neal, which meant he might come home festive. Later in the day there was a phone call. Mother picked it up, and the doctor said, "Your baby is dying. There's nothing we can do," and he hung up. It was so abrupt.
Daddy was furious. He came home and got the doctor and said, "Listen. That is no way to tell anyone their child is dying. We will be right down."

So we went down to the hospital. We were on the third floor. We went all the way down. It was this glassed-in area. We could see these little babies, and one of the babies was turning blue. It was Christopher. Another doctor came over and said to Dad, "There is a new procedure. We replace the blood. We'll know in a few days."

So we went home, not knowing whether Christopher was going to live or die. Dad helped mother up our wide front stairs into the room. He came out of the room. It was dark, and he saw us in the hallway, and he said, "There's nothing you can do. Just hope for the best. Go Christmas caroling."

So we ran down the outside back stairs, ran halfway across the street and turned. We were so disappointed. All the electric lights were on. Even Maureen had forgotten to light the white candles. And Dr. Graham took us all over the neighborhood. He always knew who was hurt and sad and lonely. We would go to the Free Hospital For Women. We would do the Christmas caroling in the big ward, and the whole thing took two hours. So that night we came back over the hill towards our house, and we all stopped and looked at our big old house. It was all dark, but there was a little white candle in every window. And Dr. Graham said, “We're going to sing one more carol, for your mother.” 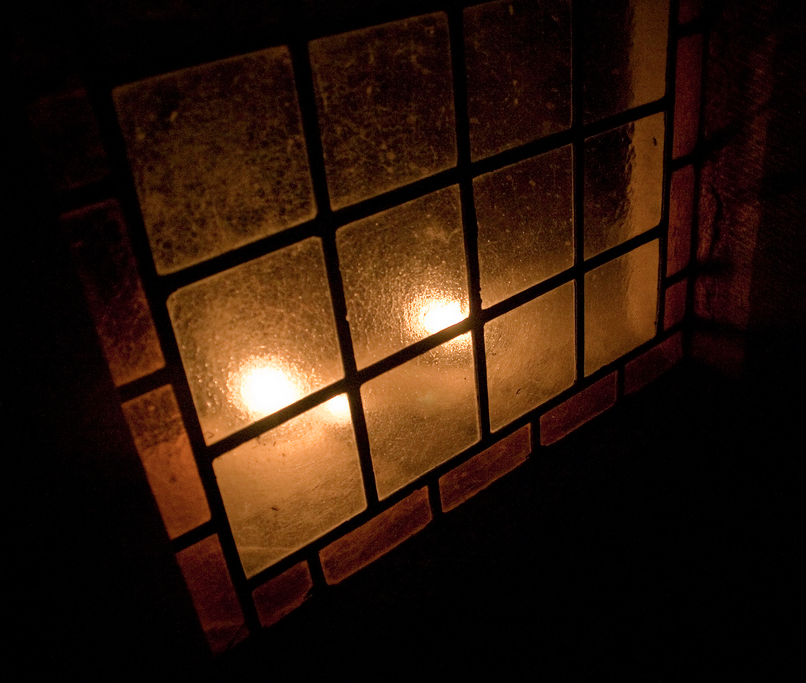 Candles flickered in the O’Callahan’s windows as the carolers sang outside. (Photo: chrisdonia; Flickr CC BY-NC-SA 2.0)

And we did something we'd never done before. We walked around behind the house and we were singing up towards mother's window on the second-floor. The window was all black, but there was that white candle. We were singing “The First Noel.” He was conducting us, and then mother appeared in the window wearing a white house coat. She looked like an angel.

Ten years later we were finishing up the Christmas caroling, and Dr. Graham said, "One more carol." It was a tradition now. We always sang up to mother's window. So we were singing, and as we were singing…I had my college sweater on... Singing “The First Noel,” mother appeared as she always did and then I looked...My sister was beside me, Maureen, and she was crying. And I thought, "Oh, she's just been married. She's going off to Chicago." And then I realized she was crying because she was standing beside Christopher. He was 10 years old.

CURWOOD: You got me with that one, Jay.

CURWOOD: I just got that catch in my throat. So your brother lived.

O'CALLAHAN: My brother lived. He loves to hear that story only because of that moment. If they had not replaced the blood, he would've died. And it was just a new procedure at the time. So he was something like negative, but it was only that other doctor who happened to hear and come over.

CURWOOD: So he's your family's Christmas present all these years.

O'CALLAHAN: Yes it's true. I told that at Thanksgiving, and Christopher said, "Good ending!"