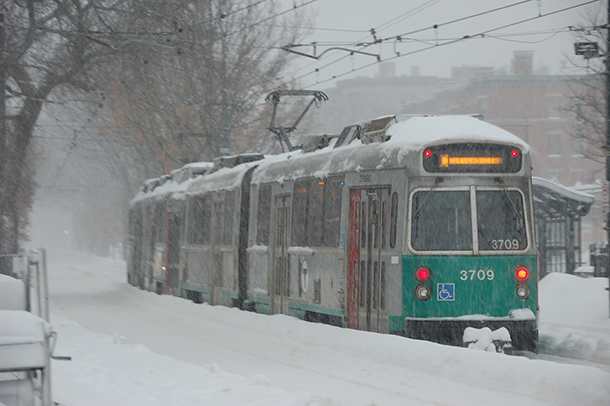 In the last three weeks, record-breaking snowfall has blanketed New England, shutting down public transit and leaving many Bostonians stranded. Bruce Gellerman and host Steve Curwood report that while this frustrated and angered some, these snows have only piled more misery onto the mountain of financial problems Boston’s aging Massachusetts Bay Transport Authority (MBTA) already faces.

CURWOOD: From the Jennifer and Ted Stanley Studios in Boston and PRI, this is Living on Earth. I’m Steve Curwood.

[INTERCOM VOICE: The next Red Line train to Alewife does not take Customers.]

CURWOOD: That’s the message passengers on the oldest underground railway system in the country have heard far too often over the last couple of weeks, as ferocious weather dumped over six feet of snow on Boston. At least, they heard the message if the trains arrived at all. The MBTA, the Massachusetts Bay Transportation Authority, shut down totally for over 30 hours, as the creaking elderly ill-maintained subway trains proved no match for the piles of snow.

A tweet from the MBTA updating customers on service suspension. (Photo: MBTA)

PALMER: So, how was the commute this morning?

CURWOOD: The MBTA has suffered from decades of underfunding and neglect, and when Blizzard Nemo hit back in 2013, Boston’s public transit also shut down — that time for 48 hours that started in advance of the storm because officials were so concerned about the fragility of the system.

Much of the woes are due to severe underfunding and politics that have saddled it with a mountain of debt. And just before the latest storm, according to published reports, Charlie Baker, the newly elected Republican governor of Massachusetts, proposed cutting another $40 million from the budget for the state transportation system. So it is interesting that back in 2012 when Living on Earth’s Bruce Gellerman reported on the financial woes of public transit in Boston, one person who offered him an assessment was Stephanie Pollack who is now the Transportation Secretary for Governor Baker.

Here’s part of Bruce’s story that begins with her comments.

GELLERMAN: Until a dozen years ago budgeting wasn’t a problem for the T because it didn’t have a budget. If at the end of a fiscal year, there was a shortfall in running the transit service – state lawmakers reached into general revenues and made up the difference. Then, in 2000, the legislature passed a measure called "Forward Funding.” The mass transit system was told to come up with a balanced budget and as part of the deal got 20 percent of all the revenue from the state sales tax.

POLLACK: And that was actually a huge victory. It amounts to half a billion dollars a year in revenue that the MBTA has that no one can touch. The problem is that gift came with some strings attached, including some pretty substantial debt and the requirement that the MBTA pay its way in the future.

GELLERMAN: The strings were attached to the giant project known as Boston’s Big Dig. It’s a system of tunnels, and bridges under and around the downtown area. The Big Dig was the largest, most complex and costly construction project in US history.

In exchange for getting money from the state’s sales tax - the T inherited $3.3 billion in Big Dig debt. Delayed by a decade and plagued by design flaws, the price tag for the highway project tripled. Dan McNichol is author of the book "The Big Dig".

MCNICHOL: This is where the big leak took place, everything on the Big Dig was big, and the leak here pushed hundreds and hundreds of gallons every minute into the Big Dig tunnels. It was a major embarrassment - 15 billion dollar tunnel and it was leaking before it was even two or three years old.

GELLERMAN: Today, the T is drowning in Big Dig red ink. Revenue from the state sales tax didn’t increase as expected. So the T has had to borrow money. It’s issued bonds, and now its debt troubles have literally compounded… the original $3.3 billion owed to bondholders plus new debt has ballooned to almost $9 billion. For the Massachusetts Bay Transportation Authority, Forward Funding was spiraling out of control. Brian Kane, Budget and Policy Analyst with the T Advisory Board wrote a report about the problem. He called it: “Born Broke”.

The excavation of Tremont St for a new line in 1896.

KANE: But for that transference of debt, Forward Funding would have been a smashing success. Unfortunately, with the transference of that amount of debt and the mandate to pay the debt service on that debt, the T’s finance have been broken since 2000. So to maintain the system they borrow money…they borrow hundreds of millions of dollars every year to maintain the system… and they pay that out of the operating budget every year. And going forward they will continue to basically pay every dollar they earn in fares basically in debt service.

GELLERMAN: If I had to pay for my ride right now on the subway…what would it really cost?

KANE: Roughly $6 of which you pay $2. Fares are roughly 450 million dollars a year. Debt service is roughly $450 million a year. They don’t have enough money to operate the system let alone maintain it.

CURWOOD: Brian Kane is now director of policy for the MBTA, and you can hear all of Bruce’s story on our website, LOE.org.

The tension between highway and transit support will be front and center as Congress deals with transportation legislation later this year. Nationwide the Highway Trust Fund is running on empty, and as Boston commuters are painfully aware, some public transit systems are in such tough shape that some days they don’t run at all.


Brian Kane wrote “Born Broke: How the MBTA found itself with too much debt, the corrosive effects of this debt, and a comparison of the T’s deficit to its peers”

Living on Earth’s “Power Shift -The Trouble With Mass Transit”