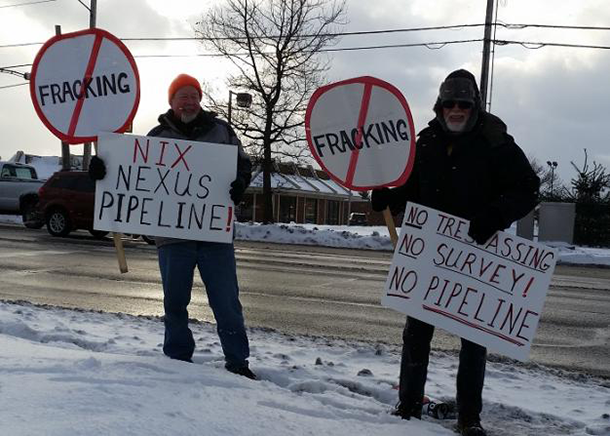 Pipelines that carry natural gas from well to refinery stretch hundreds of miles in the US, crossing public and private land. But as the Allegheny Front’s Julie Grant reports, landowners who learned that the proposed Nexus pipeline from southeast Ohio to Canada was to run across their property and carried risks of explosion, they banded together to protect their safety and property rights.

CURWOOD: Those are protesters outside the Massachusetts State House in July 2014, objecting to Northeast Energy Direct, a proposed high-pressure natural gas pipeline that would cross the north of the state to link a gas hub in New York state with one in eastern Massachusetts.

MAN: There are better avenues if they need to get gas into the Boston metropolitan area and certainly not destroying beautiful properties such as ours - it’s just not necessary.

CURWOOD: Whether or not the demonstrations influenced Kinder Morgan Energy, the company that wants to build the pipeline, it has since proposed a more northerly route for the link through New Hampshire.

Still, the eastern US isn’t the only place where there is conflict over gas pipeline expansion. In the Midwest, the Nexus pipeline that would run 250 miles from gas wells in southeast Ohio through Michigan to Canada is drawing opposition from landowners concerned about their safety and property rights, as the Allegheny Front’s Julie Grant reports. 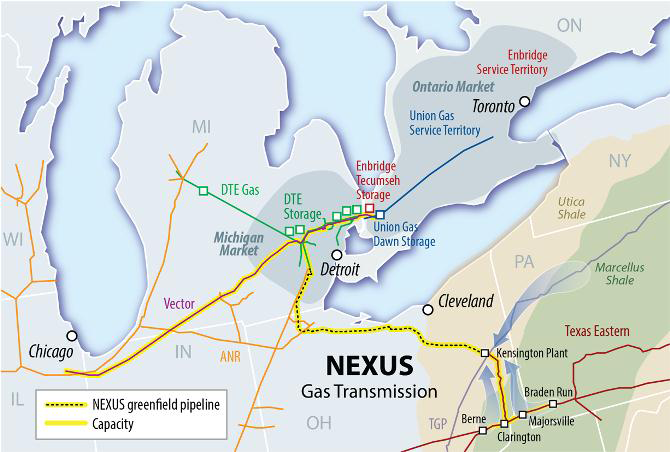 The Nexus pipeline would run 250 miles from gas wells in southeast Ohio through Michigan to Canada. (Photo: Spectra Energy)

GRANT: Paul Gierosky isn’t what you might expect in an anti-pipeline activist. He’s a businessman. He and his wife Elizabeth have been renovating their dream home in fast-growing Medina County, in northeast Ohio, for the past two years. Sitting among the trees, it’s got the feel of an upscale cabin, with wood beamed ceilings and large windows.

ELIZABETH: We wanted to be able to see the land, because it’s so beautiful. So really from every room you can see outside and see the property.

GRANT: But before they even finished moving in, the Gieroskys got a notice: their new property was in what’s called a study corridor for the Nexus pipeline. Nexus is a joint venture of DTE Energy of Michigan and Spectra Energy of Houston. The pipeline would start in southeastern Ohio, and head north and west, through their property, as well as hundreds of others on its way to Michigan and Canada. The company wants to survey the Gierosky’s front yard, to see if they can dig it up to lay their new line. The more the Gieroskys looked into it, the more upset they got.

GIEROSKI: So our first concern started out to be safety. 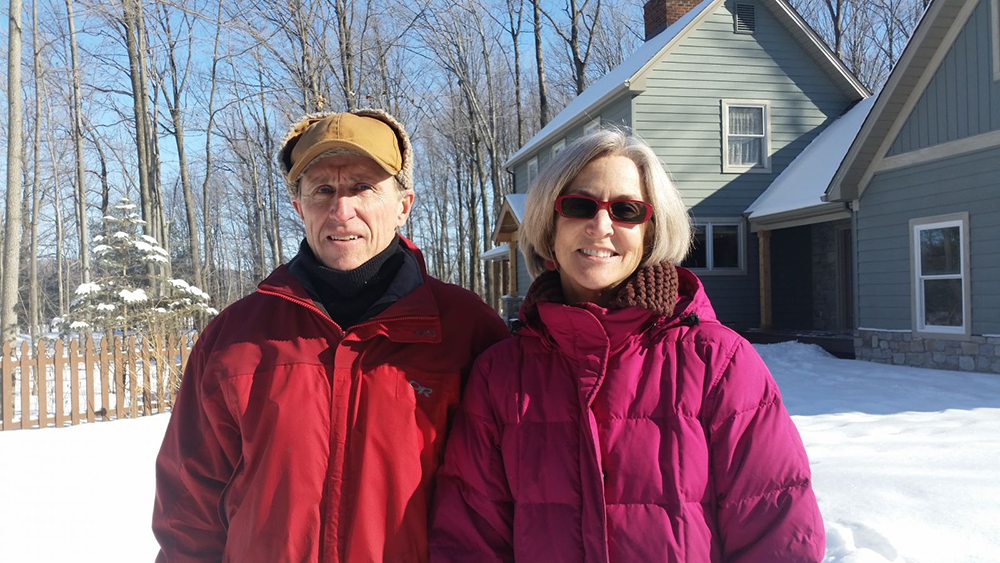 GRANT: It would be 42-inches wide. Gierosky holds his arms high and wide in the air above his head.

GIEROSKI: You understand how big the pipeline is?

GRANT: Gierosky worries what would happen if someone accidentally shoveled into it,

GIEROSKI: The experts are saying there’s so much pressure that the heat that’s going to come through a small crack or small orifice is going to self-ignite, so we’re going to have an explosion.

GRANT: He and a coalition of other concerned citizens from around the state have joined together to get the pipeline rerouted through a less densely populated area. And they’ve convinced many local township and county governments to join them. 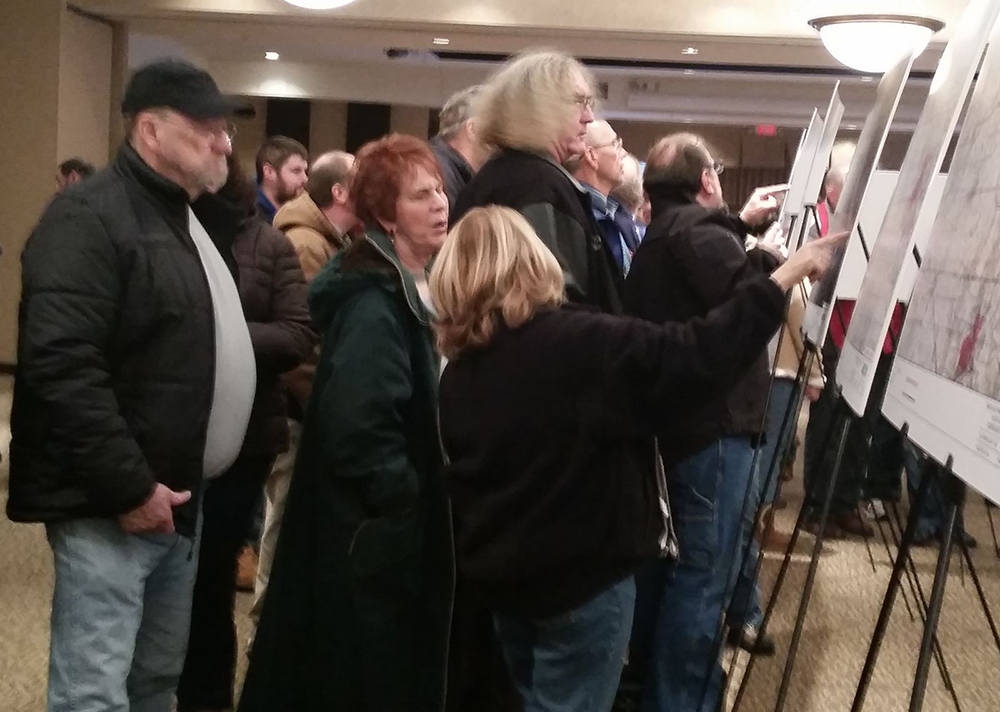 GRANT: Three hundred concerned landowners, farmers, local officials and others showed up at a public meeting held by Nexus this week. A hundred blue-shirted Nexus representatives were there ready to answer questions. Still, Maureen Hardy was disheartened. She got notice in recent months that a pipeline compression station was planned near her house. She didn’t even know what it was. But she’s worried it's loud and polluting.

GRANT: Nexus spokesman Arthur Dietsel says the company is holding meetings like this all month to hear concerns, before finalizing the pipeline route.

DIETSEL: There’s nothing set in stone. This route will continue to evolve over the course of the next year.

GRANT: Nexus has started the permitting process through the Federal Energy Regulatory Commission, or FERC, which needs to approve the pipeline route. FERC’s Joanne Wachholder is manager of the government’s review. 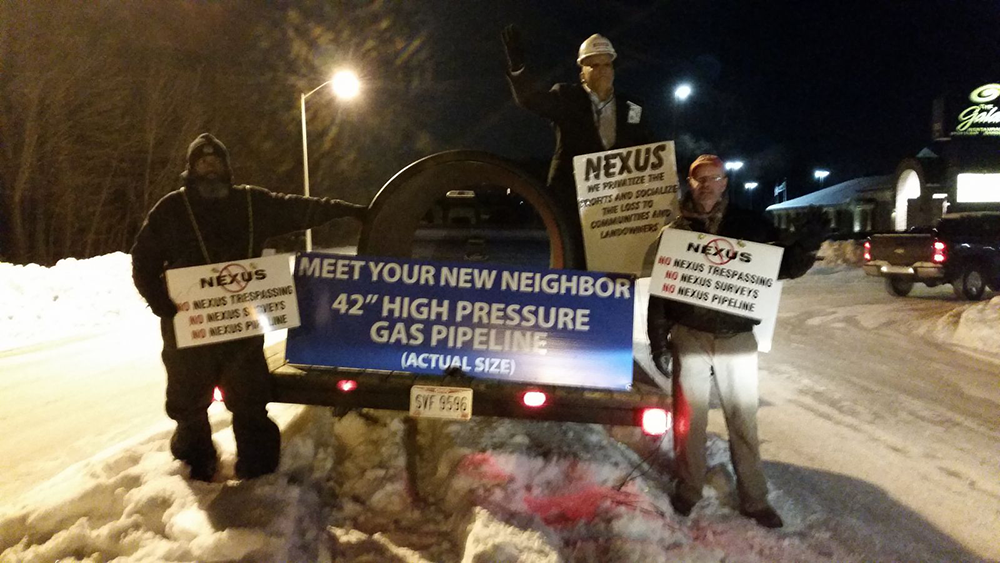 WACHTHOLDER: We have engineers that review safety. We have biologists, like myself, that review the waters and wetlands and endangered species and vegetation.

GRANT: But some landowners at the meeting don’t believe FERC will address their concerns. Mario Pasolini lives in Seville, a small farming community. He says FERC will approve Nexus.

PASOLINI: There's no doubt about it. They’re in the business to rubber stamp pipelines.

GRANT: Pasolini and landowners he’s joined with want to stop the pipeline from being built. He plans to fight Nexus in court. If they try to take his property, he plans to argue that eminent domain is only supposed to used for a public use, like a highway or railroad.

PASOLINI: This is a private, Fortune 500 company called Spectra Energy, and they’re in this to make money.

GRANT: Pasolini says the gas is heading for Canada, and isn’t going to be a public good in Ohio. Nexus says they’re are already plan to submit a formal application to FERC later this year. I’m Julie Grant.

CURWOOD: Julie Grant is with the public radio program, the Allegheny Front.


More on the story on Allegheny Front

Compressor Stations associated with the pipeline