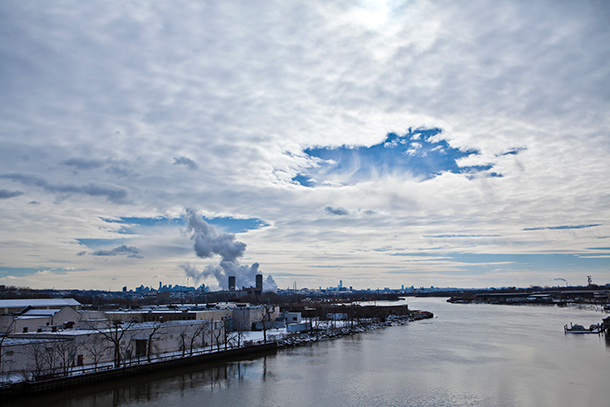 EPA is considering a petition to make a seventeen-mile stretch of the Hackensack River into a massive Superfund site. (Photo: Anthony Quintano; Flickr CC BY 2.0)

In this week’s trip beyond the headlines, Peter Dykstra tells host Steve Curwood about a proposed Superfund site, the need to update the Toxic Substances Control Act, and Pluto’s prospects for reinstatement to full planet status.

CURWOOD: It's Living on Earth. I'm Steve Curwood. Off to Conyers, Georgia, now to catch up with Peter Dykstra. He’s with Environmental Health News, that’s EHN.org and the DailyClimate.org, and he’s been peering beyond the headlines at usual. Hi there, Peter.

DYKSTRA: Hi, Steve. You know, my thoughts are with you in the snowy northeast, have fun with all that snow while you can.

DYKSTRA: But let’s start with an item from my ancestral home, also in the northeast, northern New Jersey, specifically the banks of the Hackensack River, and the Jersey Meadowlands. Last year, they got some national recognition for being the Super Bowl site, and what could be better than that?

DYKSTRA: How about being a Superfund site? There are several around the Meadowlands, but now EPA is considering a petition to make a 17-mile stretch of the Hackensack River into one big, long Superfund cleanup venue.

CURWOOD: Ah, a big dump. The locals must be so proud.

DYKSTRA: Well I wouldn’t say proud, but a couple of local mayors are welcoming the possibility of hosting the Superfund. The Meadowlands have been a dumping ground for New York City and New Jersey for 200 years – garbage, toxic waste drums, guys who couldn’t pay the loan shark fast enough – so it’s not like they’re unveiling some well-hidden pollution secret – but local officials say they’d appreciate a focused effort to clean up.

CURWOOD: I guess you can’t fix a problem unless you admit there is a problem.

DYKSTRA: Right. But one really cool thing about the Meadowlands; it’s withstood a 2 century long environmental beat down but the place is still alive. In decent weather, you can see kayakers out there, almost literally in the shadow of the Empire State Building, and it’s not a bad bird watching site, either. The resiliency of the Meadowlands, its potential recovery, and of course all that environmental abuse made it a perfect place for me to learn about the environment. The Meadowlands are in my blood, Steve.

CURWOOD: Maybe you’d better see a doctor about that one, Peter. 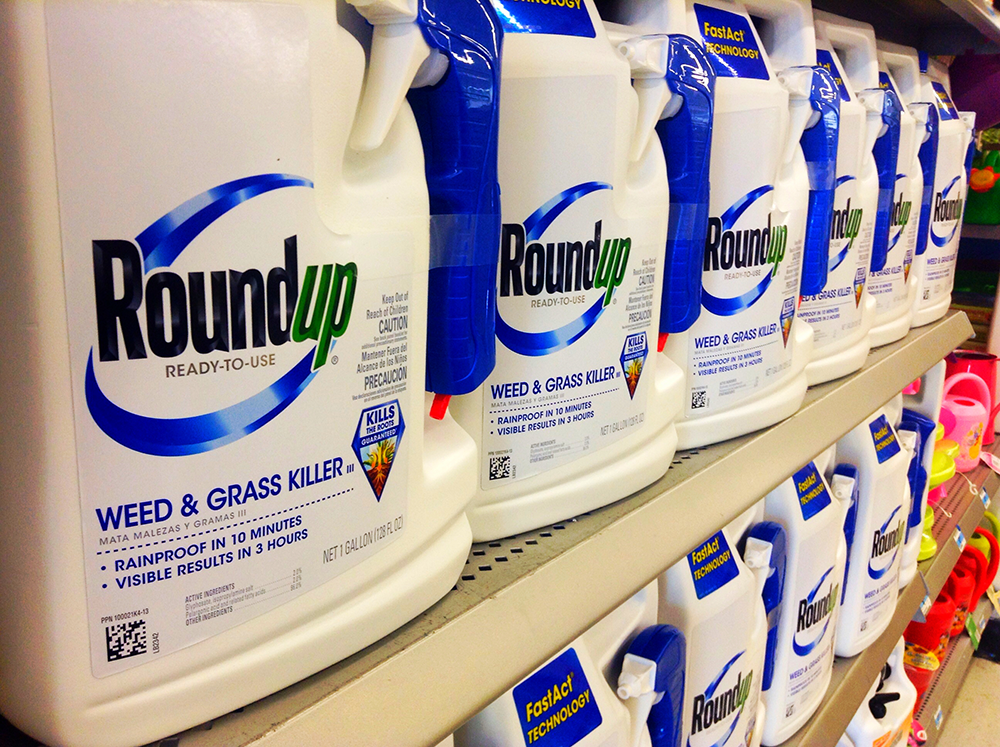 The Toxic Substances Control Act (TSCA) has been around for thirty-nine years, and both environmental safety advocates and the chemical industry say it’s in need of an update. The commercial weedkiller “Roundup” and its key ingredient Glyphosate are not currently covered by TSCA. (Photo: Mike Mozart; Flickr CC BY 2.0)

CURWOOD: It seems to me that the reform of TSCA has been kicking around Congress for several years, right?

DYKSTRA: Right you are, Steve, Congress is on the case, and as you can imagine, the notorious gridlock of Congress is in full play when it comes to EPA regulating a major industry. Some want to strengthen TSCA, others want a weakened version that would override some of the very strong chemical safety laws passed by several states in recent years, but it’s all a moot point, because EPA acknowledges that it doesn’t have the resources to make the existing law work: about three-quarters of the 80,000 chemicals in use in the U.S. haven’t even been fully tested, let alone regulated. Elizabeth Grossman in the Guardian this past week wrote a great roundup on TSCA. Oh, and by the way, Roundup, the commercial weedkiller, and its key ingredient Glyphosate? - not covered by the Toxic Substances Control Act.

CURWOOD: Maybe we should regulate the bad puns, too. What have you got for us from the history vault? 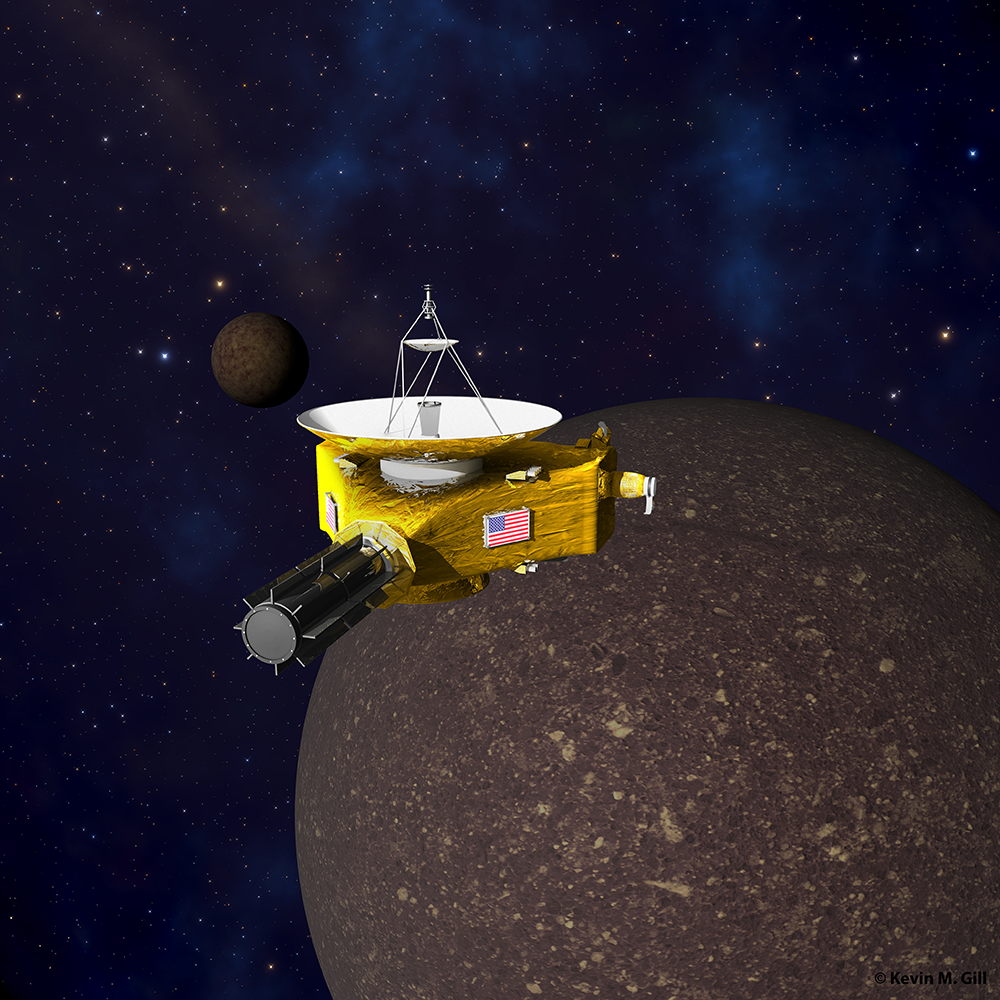 Eighty-five years ago this week, Clyde Tombaugh discovered the planet Pluto, which in 2006 was demoted to “dwarf planet” status. However, the debate continues over whether Pluto is a planet. NASA’s New Horizons spacecraft, shown approaching Pluto in the above artist’s conception, will send pictures back to Earth later this year to try to settle the debate. (Photo: Kevin Gill; Flickr CC BY-SA 2.0)

DYKSTRA: Bear with me here. Clyde Tombaugh was a Kansas farm-boy who had a fascination with astronomy. In 1928, at age 22, he built a telescope, grinding the lenses himself and building its mechanics from parts from a dairy machine and a 1910 Buick. He sent his observations to Arizona’s prestigious Lowell Observatory, hoping for a little feedback, and instead, they gave him a job and two years later, he found a new planet. An eleven year-old won a worldwide naming contest, it’s christened Pluto, 3.5 billion miles from the sun. But in 2006, using the vastly improved astronomical equipment – an international panel demotes Pluto to “dwarf planet” status.

CURWOOD: Could that be an example of planet denial?

DYKSTRA: Well, there are honorable men and women still arguing over Pluto’s status, and the debate is heating back up: NASA’s New Horizons spacecraft will wrap up a nine-year trip to Pluto this summer, and it’ll send back pictures.

CURWOOD: Thank you Peter. Peter Dykstra is with Environmental Health News, that's EHN.org and TheDailyClimate.org. Talk to you again soon.

DYKSTRA: All right, thanks again. Talk to you soon.

CURWOOD: And there's more on these stories on our website at LOE.org.

The Guardian: “Untested chemicals are everywhere, thanks to a 39-year-old US law. Will the Senate finally act?"