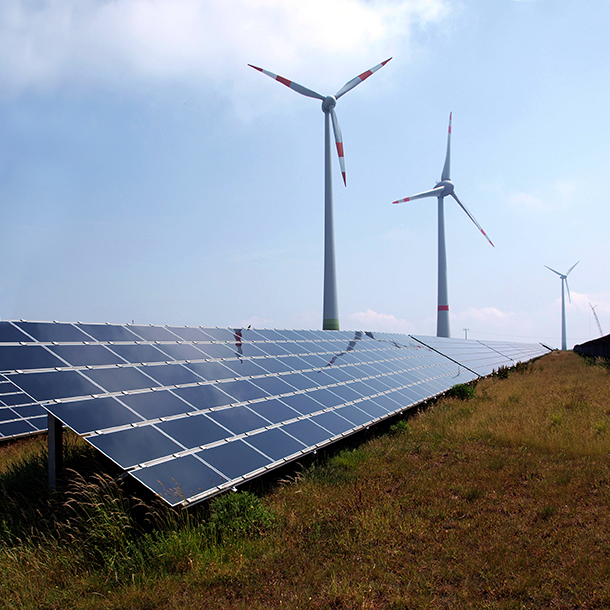 Many states have instituted Renewable Portfolio Standards, that require a proportion of energy needs be met by green power, rather than fossil fuels. But as the Clean Energy States Alliances’s Executive Director Warren Leon tells host Steve Curwood, despite better technology, public support and tax incentives, some states are looking to roll back their renewables policies.

CURWOOD: It's Living on Earth. I'm Steve Curwood. Renewable energy is having its moment in the sun, accounting for about 40 percent of newly installed power in the US in 2013. This growth is boosted by tax incentives, and broad public support. Yet backing at state government level is eroding. Some states that have required a certain percentage of electric power to come from green sources - so called “renewable portfolio standards” - are looking to trim or even eliminate those mandates. Warren Leon is the Executive Director of the Clean Energy States Alliance and he with us now to explain the pushback. Welcome to the Living on Earth.

LEON: Thanks for having me on the show.

CURWOOD: Warren, what are renewable energy portfolio standards and what's their function?

LEON: Renewable portfolio standards are a requirement that the electricity suppliers in the state get a certain share of their electricity from renewable energy, and the way they're normally set up is that the amount of renewable electricity they need to get every year goes up slightly and that drives the development of additional wind, solar, biomass and other renewable energy facilities in this country.

CURWOOD: And what states have those at this point?

LEON: There are 29 states plus the District of Columbia.

CURWOOD: Walk me through the renewable portfolio standard of, well, any state of your choosing.

CURWOOD: Tell me the kind of difference that renewable portfolio standards have made in a place like California. How much less fossil fuel are they using there?

LEON: California, they have a very aggressive renewable portfolio standard or RPS, by the year 2020 they have to get 33 percent of their electricity from renewable sources. So there would've been some renewable energy development anyway, but it's probably the case that 15 percent of electricity that may have come from fossil fuels is coming from renewables simply because of the existence of that RPS. 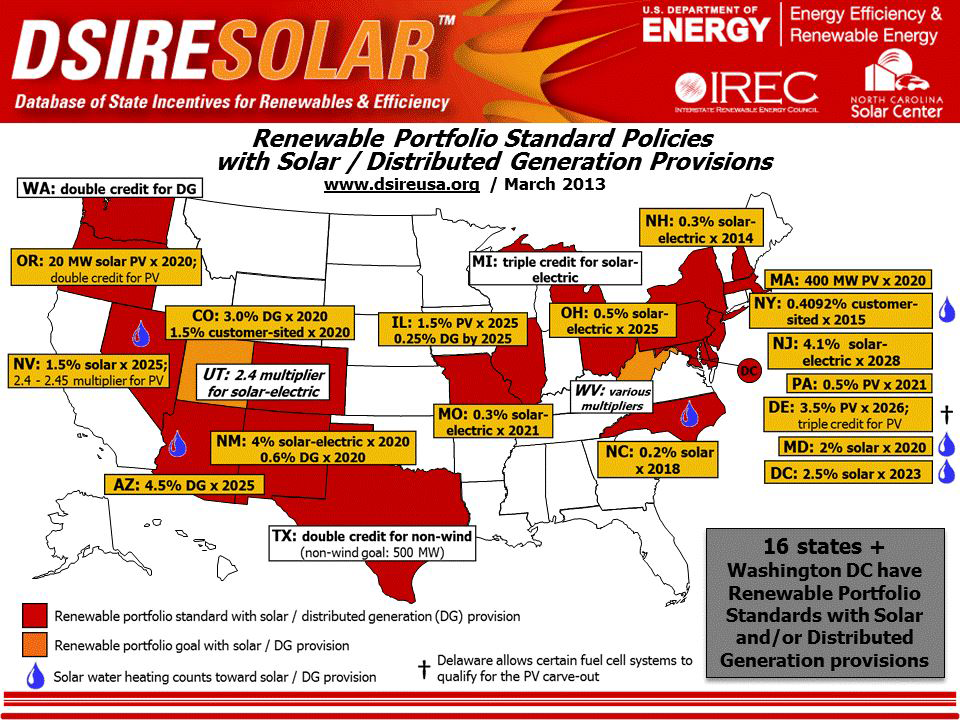 States with renewable portfolio standards, including solar or distributed generation provisions, as of March 2013. (Photo: Database of State Incentives for Renewables & Efficiency)

CURWOOD: Now, as I understand it, a number of states are looking to roll back renewable portfolio standards. Why is there this resistance now to something that, well, obviously saves fossil fuel energy.

LEON: Well we can't necessarily say states are trying to roll it back. The important thing to keep in mind is that renewables remain widely popular on a bipartisan basis in states across the country. Having said that, there are certain groups that would like to see the RPS roll back, and they really have three motivations. One is fossil fuel interests that are trying to attack and weaken the competition. Secondly, although renewable development has economic benefits for the state, it does lead to slightly higher electricity costs, the costs from most states has been less than 2 percent, but it's still a real increase. And third there are some folks who have philosophical objections to any government policy that seems to be interfering with a completely free and open marketplace.

CURWOOD: What about what happened in Ohio? 2014 saw legislation to dump renewable portfolio standards there.

LEON: Yes there was a move in Ohio to eliminate or reduce the renewable portfolio standard. And a lot of folks in the business community came out in support of the renewable portfolio standard because they saw that renewable energy development was good for jobs and business growth in the state. And so what they ended up doing was putting it on hold for two years while they're going to study the situation. It's going to come up again, but the fact that it was not eliminated or completely rolled back shows that there are powerful public interests that still push for retaining that.

CURWOOD: There are number states that this is under discussion I think, what, Indiana, Illinois, Georgia, Texas and Oklahoma, Maryland, Kansas...as I understand it their renewable portfolio standard is being challenged in the legislature this year. It comes up year after year. What happens in these debates and why does repeal of renewable portfolio standards seem to lose every time in Kansas, at least so far? 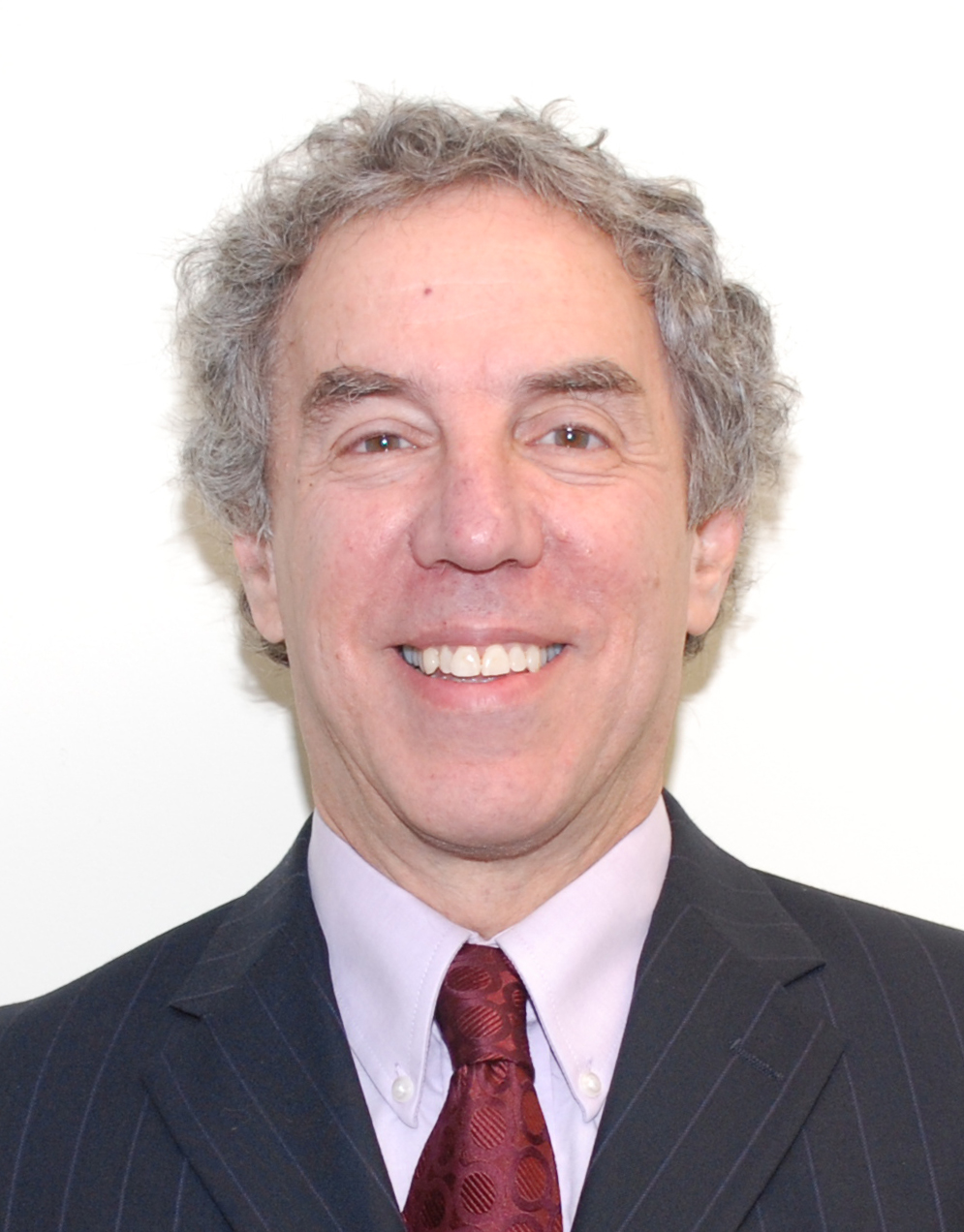 LEON: Well what's happened Kansas is there is strong bipartisan support for renewable energy development. There are some folks who want to get rid of it so it's a battle and they'll certainly be efforts again this year to roll it back in Kansas and we'll have to see. On the other hand we need to keep in mind that at the same time there are states like Kansas where they're going to be efforts to roll back the RPS, they're going to be other states like Maryland and Illinois and Michigan where there will be efforts to strengthen the RPS this year. And there's going to be a strong effort that's underway in the state of Vermont to establish a renewable portfolio standard for the first time. So things move in both directions and it's a complicated situation.

CURWOOD: How does today's climate and enthusiasm for it compare to past years?

LEON: In some ways the fact that renewable energy is politically contentious now is in part a result of its success. Twenty years ago, nobody was opposing the development of renewable energy because fossil fuel and interests and those who in theory didn't like renewable energy all that much didn't see it as much threat. They didn't see that it had the potential to significantly reduce the use of fossil fuels, so what's happened now is renewable energy, the cost has come down, the share of the electricity that comes from renewables has gone up enough that it's now a serious force in the energy landscape. And it's going to continue to increase if current trends continue.

CURWOOD: Look into your crystal ball...30 years from today, which is the lifetime of the power plant, what you think the percentage of renewable energy will be at that point?

LEON: The use of renewable energy is clearly increasing in states across the country. Thirty years from now it will be well over half. I am optimistic the technologies are getting better, that cost is coming down, the reality of climate change is going to become ever more apparent and I have faith in the public in this country and even in the policymakers that they will take actions that will transform our electricity system and make it cleaner and more renewable.

CURWOOD: Warren Leon is Executive Director of the Clean Energy States Alliance. Thanks so much for taking the time with us today.