Advances In Storage for Renewable Energy 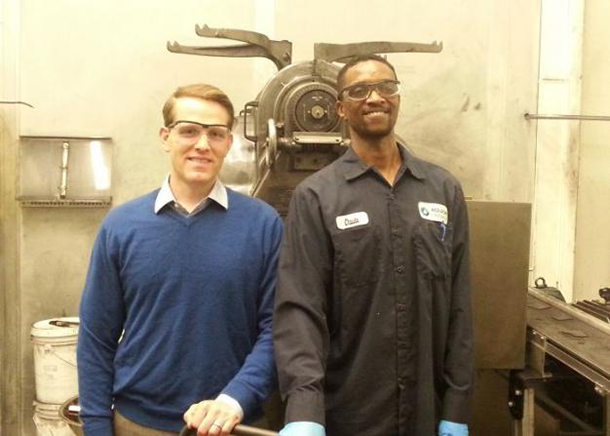 Increasing amounts of energy comes from renewable sources like solar and wind, but it’s hard to store the excessnfor times when that’s not available. But as the Allegheny Front’s Kara Holsopple reports, better battery technologies and funding could help make renewable energies a more viable alternative to fossil fuel power.

CURWOOD: Solar energy is booming in America, with 100 percent growth last year at the utility scale, but like the wind, it is not a constant or always predictable supplier of power. So along with the solar revolution there is an energy storage revolution underway, though it is lagging well behind the growth in renewables. Some folks are trying to invent new forms of storage including batteries, but there are also enterprises that are tweaking existing technology in ways to make renewables more viable alternatives to the always available nuclear, gas and coal-fired power plants. The Allegheny Front’s Kara Holsopple visited one such firm in Pittsburgh.

HOLSOPPLE: Ted Wiley doesn’t look like your typical company vice president. He’s young, and wearing a casual blue sweater. We’re at Aquion Energy’s small warehouse near the river in Pittsburgh. Wiley puts on clear safety glasses, and leads me down a ramp and into a room that houses the rotary dial press.

WILEY: It’s a 10-ton press and we use it to press the powders that we make one of the electrodes in our battery with.

WILEY: ...looks kind of like one of the sides of an Oreo cookie. [ NAT Thump as they are pressed and move down the belt]

HOLSOPPLE: With each thump, another electrode is born. That’s where energy is stored in the batteries the company produces in their actual factory in a nearby county.

So the equipment is ordinary--even the basic battery technology is like any rechargeable battery--like the one in your cell phone. But those are mostly lithium ion batteries. They’ve been around for decades. But Wiley says they used to be too expensive for common usage.
That changed when handheld devices became popular in the early 2000s.

Production ramped up, and prices dropped. Wiley says that’s when the batteries became feasible for larger scale energy storage. And that’s been a game changer for renewables, like solar.

WILEY: Before it was on the order of 10 or 20 X too expensive. Now it’s starting to get to a price point where in certain instances, it looks reasonable.

HOLSOPPLE: Especially in places like California, where solar is a bigger part of the energy mix, and there’s more interest in storing power from the sun.

Even in Pennsylvania where there is plentiful and cheap natural gas and coal--and less sun--there’s interest in renewable energy storage. It means solar and wind power can be used as backup--for example, during outages. And with a cleaner carbon footprint.

HAMILTON: I like to say energy storage is the bacon of the grid because it makes everything better.

She says energy storage is so delicious because helps make the grid more efficient and reliable. Solar panels capture the energy, and batteries hold it until it’s needed.

Hamilton says the federal government helped create a market for renewable storage a couple of years ago. It allowed for compensation of any system that helps the grid in times of need, like during extreme cold or heat, when people are using more energy.

But Pennsylvania’s leading environmental group says the push for solar storage puts the cart before the horse.

ENDRES: The discussion really needs to be about how we get renewable energy on the system that we have right now…

HOLSOPPLE: Endres says when Pennsylvania reaches 12 or 15 percent solar, like in West, then it makes sense to get more excited about storage.
Pittsburgh-based Aquion admits its customer base is currently in sunnier places, like the Caribbean. But they expect other regions will warm up to solar storage in the near future.

CURWOOD: Kara Holsopple is with the public radio program, the Allegheny Front.