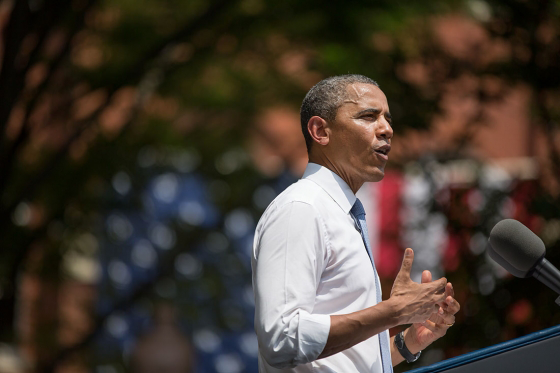 President Obama orders the US government to slash federal global warming gas emissions by 40 percent over the next decade. The Obama Administration also cuts off disaster preparedness funding for those states that refuse to acknowledge the risks of climate disruption. The Union of Concerned Scientists’ climate policy manager Rachel Cleetus discusses these policies with host Steve Curwood.

CURWOOD: From the Jennifer and Ted Stanley Studios in Boston and PRI, this is Living on Earth. I’m Steve Curwood. There’s a new executive order that directs the Federal Government to deeply cut greenhouse gas emissions and increase renewable energy use within its own operations. It’s part of the Climate Action Plan President Obama unveiled almost two years ago. In addition, the Federal Emergency Management Agency, FEMA, will only grant disaster preparedness funds to states that factor climate risks in their hazard mitigation plans. Here to explain these announcements is Rachel Cleetus, Lead Economist and Climate Policy Manager at the Union of Concerned Scientists.

CLEETUS: What they announced was they would be cutting federal government greenhouse gas emissions 40 percent over the next decade, and they also announced some major commitments to 30 percent of their renewable sources. In June of 2013, the president laid out a vision for his climate action plan, and what we're starting to see, some meat on the bones here. They are many pieces, both to help guide emissions, as well as to help build our nation's resilience to climate impacts. And we've seen some of those pieces be announced over a year and a half, including things like a draft proposal to limit carbon emissions from power plants, vehicle standards, steps to cut methane emissions, and this is simply another piece. 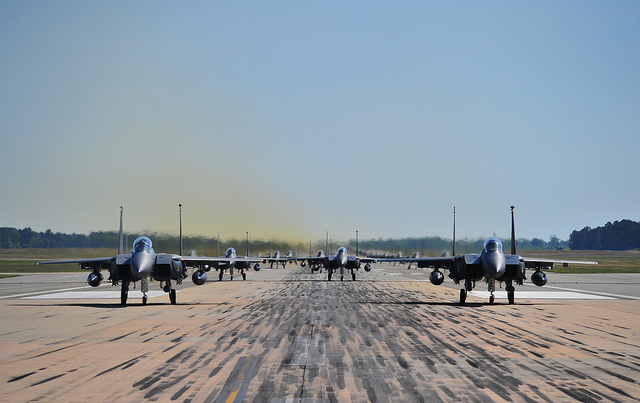 As the U.S. Department of Defense is the nation’s largest energy consumer, reducing greenhouse gas emissions and increasing clean energy use within the federal government can have a significant impact. (Photo: US Air Force; Flickr CC BY-NC 2.0)

CURWOOD: To what extent does this federal order stimulate activity in the private sector?

CLEETUS: It's a very significant step in this direction, and that was evidenced by the fact that when the executive order was announced there was a business roundtable that was also convened among the largest government suppliers of energy and energy technology, and we saw a number of businesses including GE, Honeywell and others make commitments to cut their greenhouse emissions as well. We're not just getting the federal government making cuts, but we're pulling along an entire supply chain that's also being greened.

CURWOOD: To what extent does this stimulate the broader economy to take these green options? You know, many years ago, President Clinton issued an order requiring the federal government to use recycled paper and it's now ubiquitous.

CLEETUS: It's very interesting because what we're seeing here is a bit of push-pull. Sure the federal government is taking leadership, but actually there are many states around the country that have already been demonstrating leadership on clean energy progress whether it's in deploying renewable energy in wind and solar or implementing standards to improve energy efficiency, and what we've seen in the marketplace is a dramatic fall in costs of wind and solar. So you can see that the federal government is joining the party now. They're taking advantage of these cost effective, low-carbon energy resources. 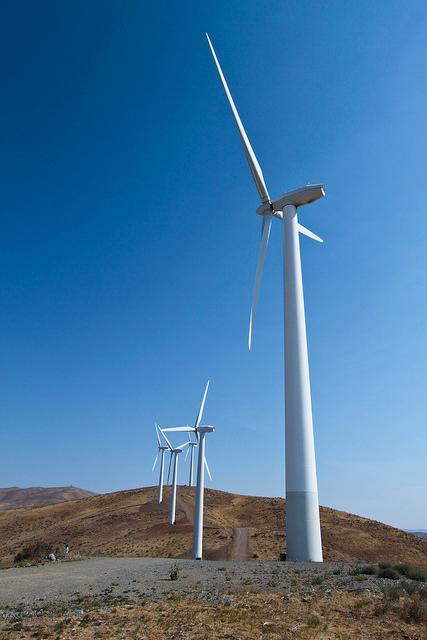 CURWOOD: In your view, you see the federal government as a follower here, rather than a leader, it sounds like.

CLEETUS: I think they're doing a bit of both. They're taking advantage of market realities, but the other thing they're doing is that they're setting a bar for the nation as a whole. This is what's possible when one of the biggest players in the energy market takes a step like this. Think about the Department of Defense, for example, a huge energy consumer. Think about all those public lands in which you can site wind and solar resources. There's a real opportunity here, and I think they're pointing the way to that opportunity and the economic benefits that it can bring.

CURWOOD: What will this cost the federal government?

CLEETUS: Well that's the interesting thing; because the costs of these technologies have fallen so much that they're saving taxpayer's money, up to $18 billion dollars in avoided energy costs. Not just from renewable energy, but also from energy efficiency, and that doesn't even take into account that it’s bringing many other energy benefits along with it, so when we transition to low carbon energy resources we generate economic benefits. We also cut other pollutants that have big public health costs. 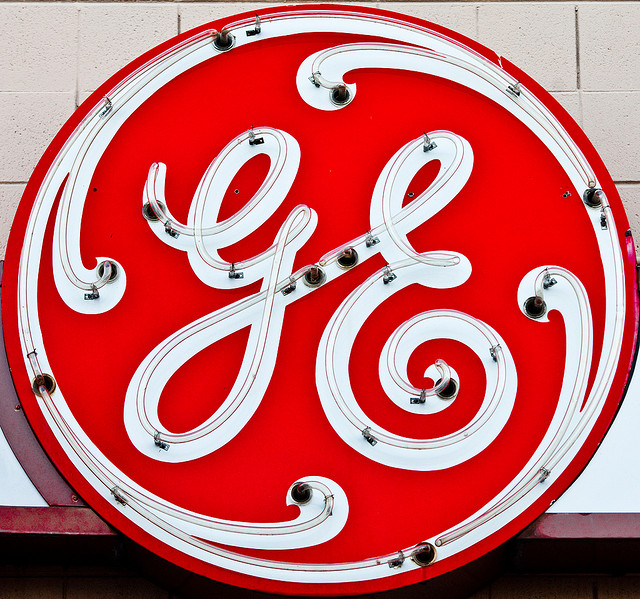 General Electric, which is a major federal government supplier, was one of several large companies that joined the roundtable convened by the Obama Administration to discuss corporate plans to reduce greenhouse gas emissions in tandem with the federal government. (Photo: Thomas Hawk; Flickr CC BY-NC 2.0)

CURWOOD: What have federal agencies already done to cut their energy use?

CLEETUS: Well, a number of federal agencies have already made commitments around building efficiency, around reducing their water consumption, and what this executive order does is essentially streamline and make some uniform commitments across different federal government agencies, as well as the supply chain that meets the energy demands of these agencies.

CURWOOD: Rachel, I want to turn our attention now to this recent announcement from the Federal Emergency Management Agency, FEMA, which has said now it will prepare emergency disaster funds only for those states whose governors have signed hazardous mitigation plans that directly address climate disruption. How might this put pressure on governors like Rick Scott of Florida or Bobby Jindal of Louisiana who so far have refused to take action on climate despite a number of people’s concerns from people that their states are highly vulnerable to the impact of climate disruption? 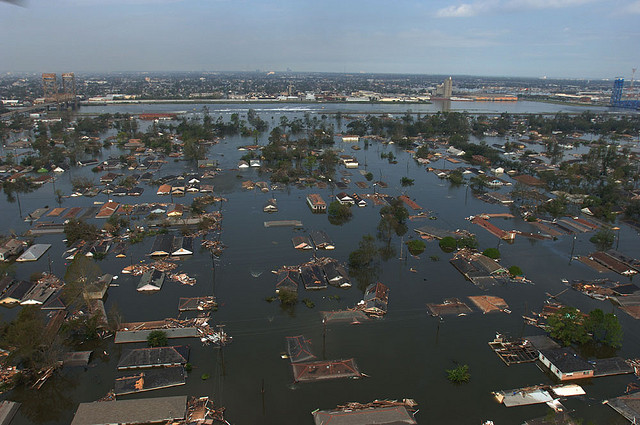 CLEETUS: I want to start by saying that the science of climate change is firmly established. We know that these risks are here, we saw them clearly outlined in the National Climate Assessment that was released last year pointing out a number of risks that the US faces, including sea level rise, drought, increased precipitation, wildfires, so it's unfortunate that we're having a partisan conversation about this. What the guidance does essentially is, it says that we know there are many factors that affect these kinds of disasters and their occurrence, and one of the major risk factors now is climate change. So it's common sense that you would include it in your plans as you prepare for future disasters. FEMA provides this money so that states can invest in a variety of ways to make sure that when a future disaster happens they're better prepared. To be very clear, this new FEMA guidance does not affect disaster relief, the kind of money that goes into the immediate aftermath of a terrible tragedy - a big storm, a big fire. What it does affect is what's called FEMA's Hazard Mitigation Assistance Program, and that's a program that essentially helps states prepare before the next disaster strikes.

CURWOOD: What are some of the examples of the climate induced hazards that the states hazard mitigation plans will need to address? 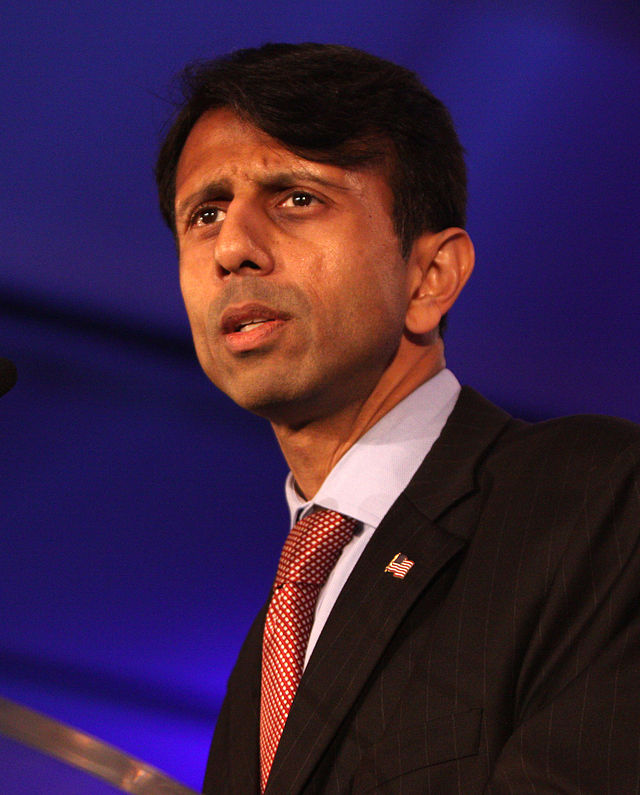 CLEETUS: Right. So, for example, we know there are many coastal states that are already experiencing sea level rise and that the science projects sea level rise is only worsening over time so that their risks of coastal flooding or storm surge are only increasing. When any investments are being made to help prepare a state for future disasters, you would want to take into account this very real scientific fact.

CURWOOD: Rachel Cleetus is the Lead Economist with the Climate and Energy Program at the Union of Concerned Scientists. Rachel, thanks for taking the time to speak with us today.

CLEETUS: Thank you very much for having me on your program, Steve.


“Fact Sheet: Reducing Greenhouse Gas Emissions in the Federal Government and Across the Supply Chain”

Executive Order: Planning for Federal Sustainability in the Next Decade

“FEMA to States: No Climate Planning, No Money”