What a Record-Low Snowpack Means for Summer in the Northwest 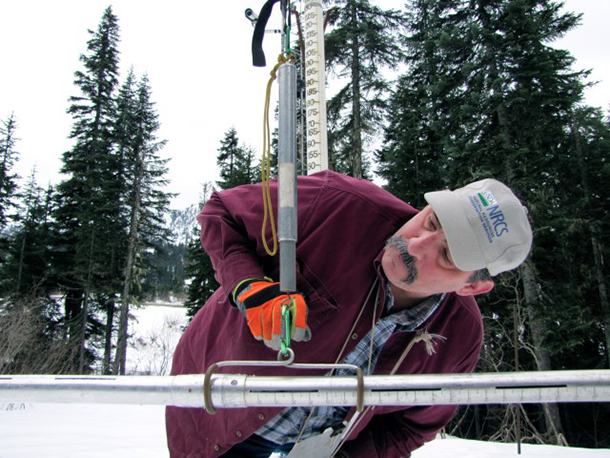 Snowpack is important for summer life in the Northwest. In the winter, snow accumulates on mountaintops and as temperatures rise, snowmelt recharges water systems and generates hydropower throughout the region. This year, snowpack is at record low and many fear that the supply might not last through the entire summer. But as EarthFix’s Ashley Ahearn reports, it’s not time to hit the panic button just yet.

CURWOOD: Now here in the eastern part of the country, we’ve been breaking snowfall records. But on the west coast, the snow season has been a bust, much to the disgust of would-be skiers. Indeed, snow levels were at record low level in Washington and Oregon. And that’s not only a problem for skiers – water utilities rely on snowpack for supplies during the summer. But as Ashley Ahearn of the public media collaborative EarthFix reports, it’s not time to hit the panic button just yet.

PATTEE: Alrighty, off we go. [walking on snow]

AHEARN: Scott Pattee screws together some aluminum tubes and walks over to stick them into the snow near Stevens Pass Ski Resort.

AHEARN: Pattee’s a water supply specialist with the Natural Resources Conservation Service here in Washington. He’s been monitoring snow levels to predict water supplies for more than 20 years. He says this is one of the worst years he’s seen. The Cascade Mountains around us are mostly brown and green, not white.

AHEARN: Snow levels in some parts of Western Washington are more than 90 percent below normal. Statewide, average snow level is 71 percent below normal. In Oregon, things are worse - the state has received less than a quarter of its normal snowfall, with the driest spots in the southern and southeastern part of the state.

But here’s the weird thing - and the reason Scott Pattee and other water managers aren’t freaking out yet - total precipitation is at or above normal for most of the Northwest. It’s just coming as rain, not snow. 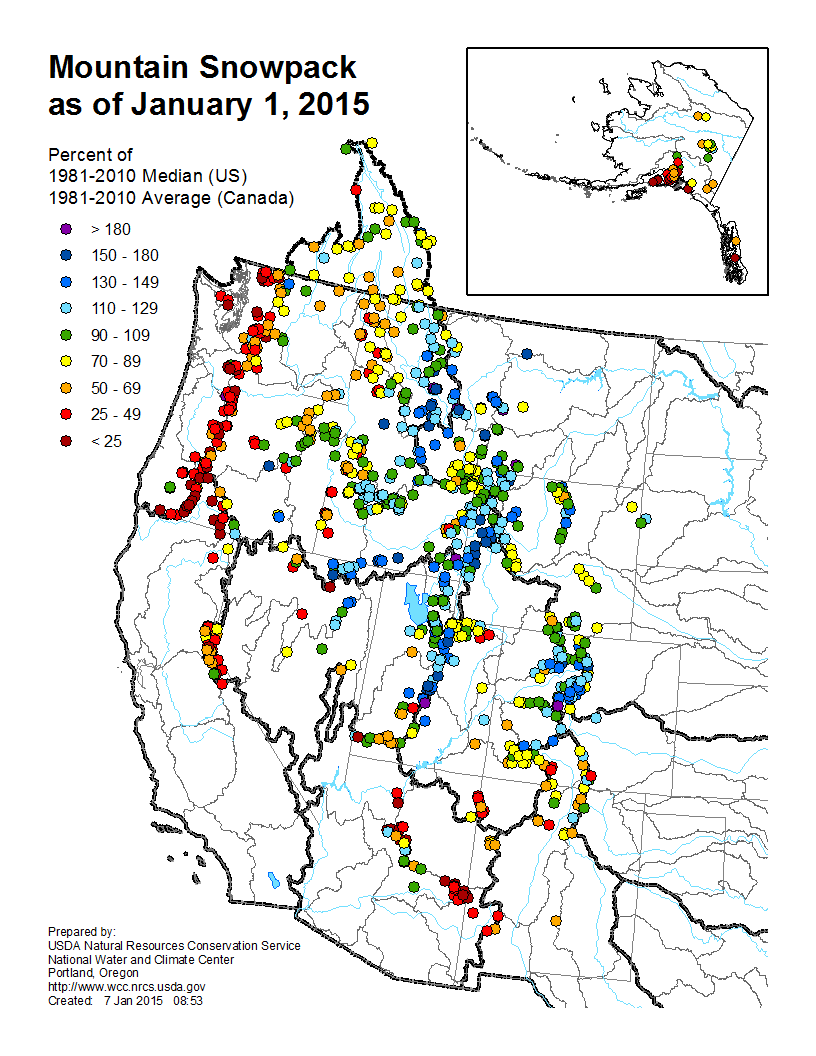 AHEARN: Mike Hanson is a spokesperson for Bonneville Power Administration. It manages 31 federal dams on the Columbia and Snake Rivers, and provides about a third of the electricity for the Northwest. He says that as bad as things might look out your window or on your local ski slope,

HANSON: That doesn’t give you the total picture. What’s really important to us is what is happening at the higher elevations throughout the northern Rockies going into Canada.

AHEARN: Snow levels there are looking pretty good, and Hanson says that snowmelt will feed into BPAs reservoirs on the Columbia and Snake throughout the season.

Many communities in the region depend on snowmelt to supplement water supplies during the dry months - especially those that get their water directly from snow-fed rivers and don’t have reservoirs to store water.

That’s not the case in Seattle. City water managers say their reservoirs have enough capacity to meet demand throughout the dry season, and they’re keeping them full in preparation.

Amy Snover is the director of the Climate Impacts Group at the University of Washington. She says that water supply systems vary throughout the region.

SNOVER: But in many cases, the water managers who are paying attention to the conditions can change the way they manage their systems and try to catch that water as it’s going down the river because it fell as rain instead of snow. 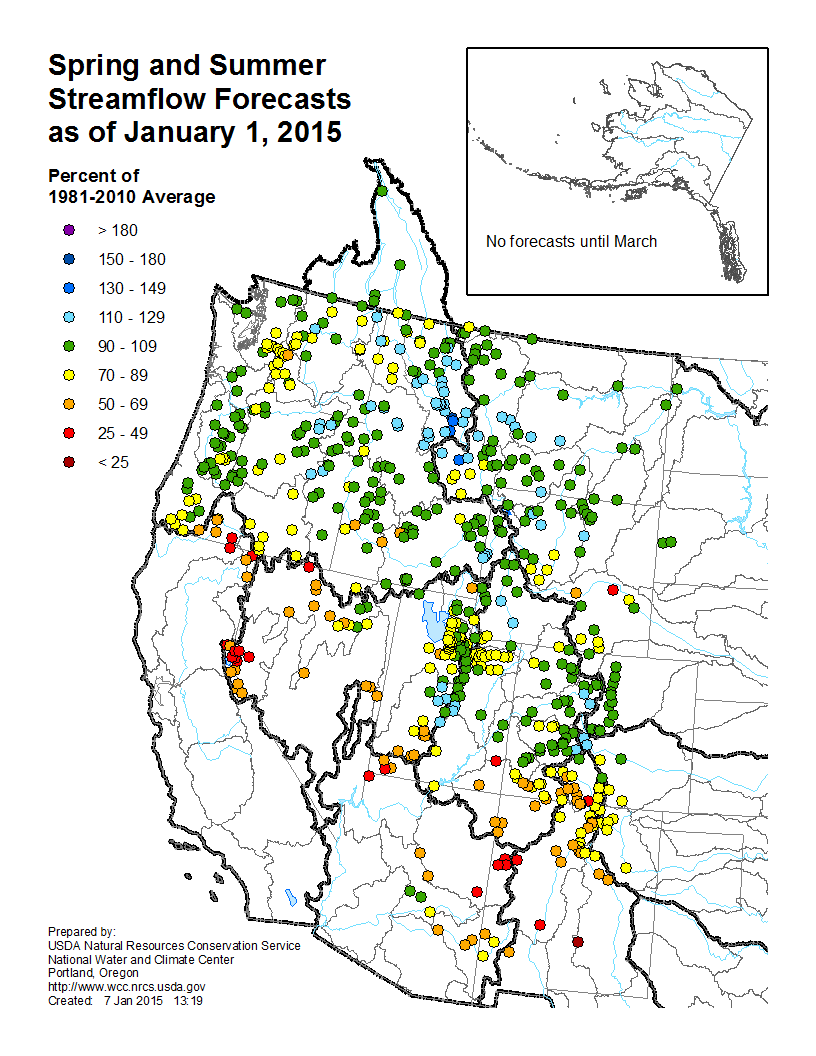 AHEARN: Water managers and others have called the warm, rainy winter this year “anomalous”. Snover agrees, but she says it’s an anomaly worth looking at because this year’s weather patterns are in line with climate change projections for the region.

SNOVER: When people ask me about this year and whether this is global warming I say, well, global warming looks like this and I also say we’ll see a lot more of these, more frequently, as we go forward.

AHEARN: There could still be some snow this month, but experts say it’s unlikely that it will be enough to make up for lost snow this winter, and there could be droughts later on in the summer.

Water supplies for hydropower and people aren’t at dire levels yet, but scientists worry that without that pulse of cold snowmelt into rivers of the Northwest this spring and summer, spawning salmon and their young, will be the first to suffer.


Learn more about the future of Northwest Snowpack on EarthFix