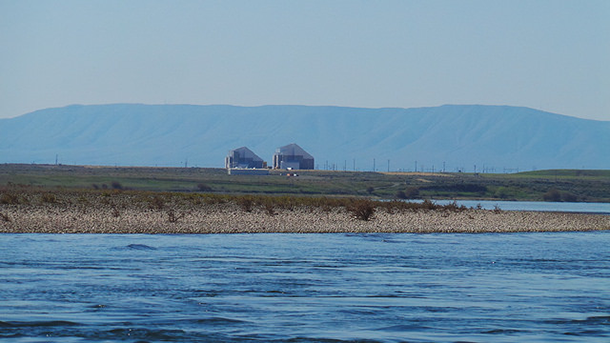 The Hanford Site, which produced plutonium for the Manhattan Project and throughout the Cold War, is now the focus of one of the largest environmental cleanup projects in the U.S. The site contains over 130 million cubic yards of contaminated soil and debris. (Photo: EcologyWA, Flickr CC BY-NC-ND 2.0)

CURWOOD: It's Living on Earth. I'm Steve Curwood. Time to check on the world beyond the headlines with Peter Dykstra of Environmental Health News, EHN.org and the DailyClimate.org. He's on the line now from Conyers, Georgia. Hi, Peter, what have you found?

DYKSTRA: Hi, Steve, you know, I’ve been working up a righteous anger about the environment and taxes. So let’s embark on the first of three stops where bad money decisions have led to bad policy.

DYKSTRA: The Department of Energy’s Hanford Site, where Cold War pressures built a mess and a money hole in the high desert of Washington State. At Hanford and other nuclear weapons production sites, armies of factory workers churned out nuclear bombs and their components, and a whole lot of toxic and radioactive waste, for decades, with oversight of the waste problems pretty much an afterthought. As the Cold War wound down in the ’80s and ’90s, Americans woke up to a huge environmental mess.

CURWOOD: And the cities and towns that built up around it were looking at, well, shall we say, an uncertain future.

DYKSTRA: Or so they thought. But for the three small cities near the Hanford plant – one of the biggest concentrations of Ph.D.’s in America by the way – the business of building the bomb turned into the even bigger business of cleaning up after the bomb. The cleanup tab for the Hanford site runs into the billions of dollars every year, and the conventional wisdom is that the cleanup wouldn’t wrap up for another fifty years from now. But officials from DOE and from the State of Washington say they’re about 25 years behind schedule on the cleanup, and over time, the price tag may balloon by tens of billions of dollars more. 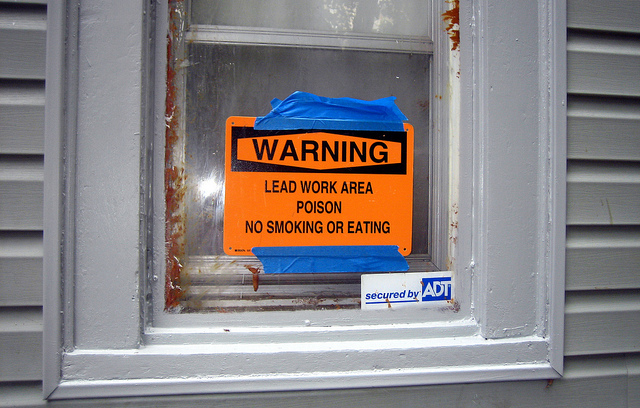 Lead-based paint in old homes is a common source of lead poisoning in kids. Funding for lead cleanup programs was recently cut, even as the Centers for Disease Control tightened standards for lead levels in kids. (Photo: Clint JCL, Flickr CC BY-NC-SA 2.0)

CURWOOD: Whoa, that’s some serious coins – it’s like the Cold War has a hundred-year, adjustable rate mortgage that’s going up.

DYKSTRA: Indeed. And let’s move on to some smart government spending that’s been largely abandoned: In the aftermath of the unrest in Baltimore and other cities a few weeks ago, there was a focus on the role of deep cuts in Federal funding to help fix longstanding lead poisoning issues that impact inner city kids. Over the past few years, federal grants to local governments for lead poisoning work have largely dried up, and cash-strapped cities are in no shape to fill the breach. In Chicago, for example, spending on programs to remove old lead paint from homes and other risks, has been cut in half, even as blood-lead levels are still rising in some of the city’s poorest neighborhoods.

CURWOOD: Yeah, we’ve reported on the links between lead poisoning and violence among young people before, so this sounds like a squandered opportunity for environmental justice.

DYKSTRA: And it’s being repeated in cities across the U.S. Detroit has had a widely praised lead poisoning program that’s under threat as well. The strange irony here is that while the bean counters in Congress were cutting funding for lead poisoning, the Centers for Disease Control had tightened standards for lead levels in kids.

CURWOOD: Hmm, so that makes strike two. Where are we going on the magical history tour this week? 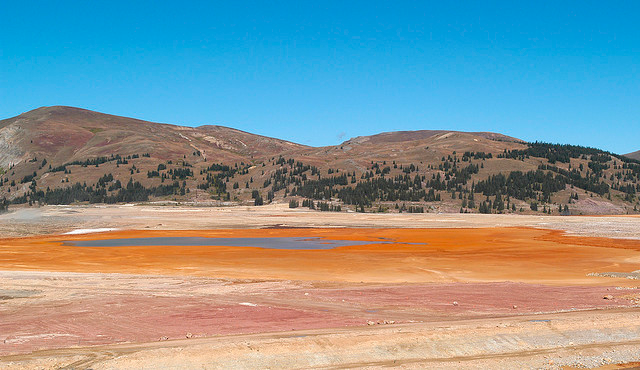 DYKSTRA: Back to 1872, when Men were Men and western land was there for taking.

CURWOOD: You mean taking it from Native Americans.

DYKSTRA: And giving much of it away again on the cheap, so that makes for an environmental funding trifecta. One hundred forty-three years ago this week, the General Mining Law of 1872 decreed that mineral rights on federal land would be given away for a price-per-acre that’ll get you a large bag of Doritos today – about five bucks per acre for hard rock mining throughout the West. Little has changed, including the price, and critics say it’s not only one of the oldest government giveaways, but one of the biggest as well.

CURWOOD: Well, with all the rhetoric about keeping government small and not wasting government resources, you’d think it’s about time to fix this.

DYKSTRA: No such luck, Steve. There have been periodic efforts to revise or abolish the 1872 Mining Law, but in this current Congress, there’s little chance of that. Mining companies have a very loud voice in western politics, and this is a remarkably sweet deal for them: A billion dollars a year in gold and other metals taken from federal land at five bucks an acre, no royalty payments. And taxpayers get stuck with the tab for cleaning up abandoned mines—and that adds up to more than two billion dollars in federal cleanup spending since the start of the 21st century, all thanks to a 19th century law.

CURWOOD: So there you have it: Some dicey environmental spending choices from the Nineteenth Century, heading towards the 22nd century. Nothing like a bit of depressing news, huh? Peter Dykstra is with EHN, that's EHN.org and The DailyClimate.org. And, well, thank you Peter.

DYKSTRA: All right Steve, thanks, we’ll talk to you soon.

CURWOOD: And you can find more details on these stories at LOE.org.