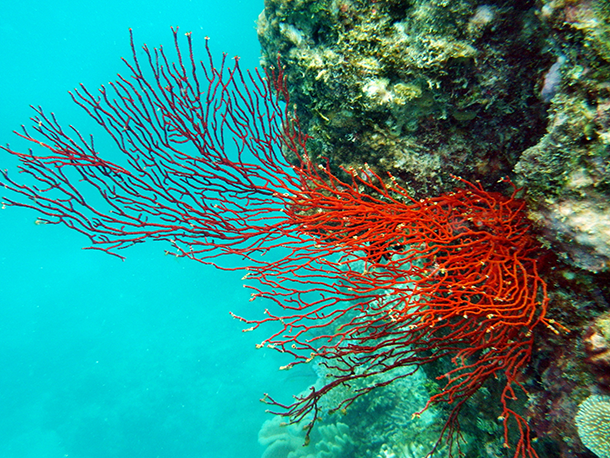 In this week’s trip beyond the headlines, Peter Dykstra tells host Steve Curwood about a coral reef protections controversy in Australia, and an effective plan to manage and conserve water in Israel, in a region known for its water crises. And we remember the life of marine pioneer and explorer Jacques Cousteau, who was born 105 years ago this week.

CURWOOD: Well, we’ll check up on the world beyond the headlines now. As usual, we turn to Peter Dykstra of Environmental Health News, that’s EHN.org and the DailyClimate.org for a sidelong view on the news. He’s on the line from Conyers, Georgia. Hi, Peter.

DYKSTRA: Hi Steve. In keeping with the oceans theme of the show, I’ve got a couple of items that are a frothy mix of good news and bad news.

DYKSTRA: Australia’s Great Barrier Reef is not “In Danger,” according to the United Nations World Heritage Committee. But… it’s complicated.

CURWOOD: Huh, how so?

DYKSTRA: Well, the UN heard from conservationists and scientists about a multitude of threats to one of the world’s natural wonders – ship accidents, pollution, acidification, warming temperatures. But they also heard from the Australian government and the state of Queensland, where the reef is worth about three-quarters of a billion U.S. dollars a year in the tourist trade, and despite all the concerns and some real evidence of potential damage, the UN stopped short of offering a special status to the reef.

CURWOOD: The Australian government’s pretty much been at war with conservationists in recent years. Isn’t this causing an uproar?

DYKSTRA: Not really. The UN is sort of putting Australia on Double Secret Probation to protect the reef, and they’ll revisit the issue in 2017 to see how good a job they’re doing down under. The biggest new concern for the Great Barrier Reef is that Queensland is Australia’s coal country, and coal exports to Asia have to go around the reef — or, in one unfortunate case a few years ago, through a shortcut in the reef. In 2010, a Chinese coal freighter ran aground on the Great Barrier Reef trying to illegally cut through it. It caused a lot of damage and a lot of anger. Environmentalists view the 2017 date as a chance to force the Australian government to live up to its promises to protect the reef. Now let’s talk about a place where they’re making great strides taking the salt out of saltwater. 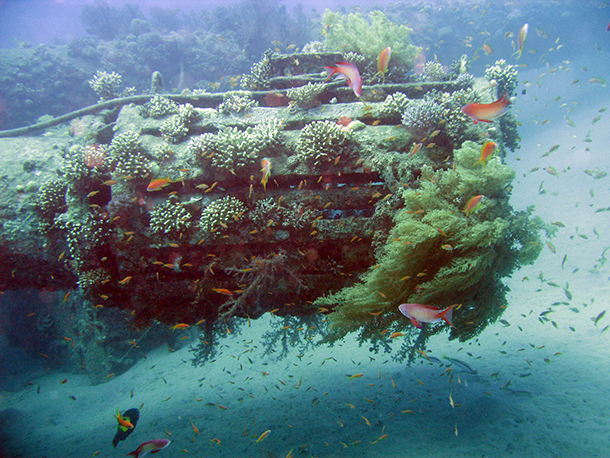 A desalination pipe coated in life off the coast of Egypt (Photo: Prilfish, Flickr CC BY 2.0)

DYKSTRA: In the Middle East, there’s something to break the pattern of too much strife and not enough water. So put aside the age-old rivalries and politics for just a second and check out what is mostly a success story. Through a combination of desalination, conservation, and water recycling, Israel has largely pulled out of what used to be a perpetual water crisis. Fixing leaky water systems, recycling used water for farm use, cutting overall use in both farms and homes, and desalination plants that now provide one-sixth of the country’s water will help save aquifers, and stop the Sea of Galilee from turning into a mud puddle.

CURWOOD: This sounds a little too good to be true, Peter. Historically, isn’t desalination energy intensive and expensive?

DYKSTRA: Not nearly as much as it used to be. The newer plants in Israel have brought the energy use and water costs way down. But there’s always a catch, and in Israel, it’s concern that sucking in billions of gallons of seawater along the Mediterranean coast will harm fish and other sea life.

CURWOOD: So this catch might be a smaller haul for fishermen?

CURWOOD: Well, I hope you’ve brought a marine moment in history for us. 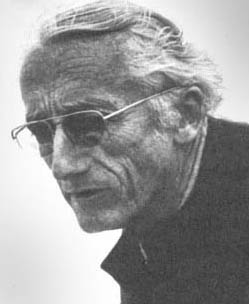 Marine pioneer Jacques Cousteau would have been 105 this week. (Photo: NASA, public domain)

DYKSTRA: Yes indeed. One hundred five years ago this week, one of the greatest ocean explorers was born. Jacques Cousteau contributed to the invention of scuba gear, then used that gear to take cameras underwater. Starting in the 1950’s, he produced underwater documentaries that were like nothing that had ever been seen before, opening up a new world beneath the surface to human eyes.

CURWOOD: He really did; you know, we tend to think of the great explorers as having lived centuries ago, but Jacques Cousteau is a modern pioneer.

DYKSTRA: Let’s throw in the word visionary, too. Like any explorer, it wasn’t always easy. His son Philippe died in a seaplane accident in 1979. His iconic ship, Calypso, was accidentally rammed and sunk in 1996, finally restored years later, then after Captain Cousteau’s death in 1997 there was a messy family feud over the estate, the rights to the Cousteau name. But the family’s back on course, Cousteau’s surviving son Jean-Michel and his grandchildren, Philippe and Alexandra, continue to educate and defend the sea.

CURWOOD: So, with all these new threats from climate disruption, overfishing, acidification, plastic pollution, what would Captain Cousteau think about the oceans today?

DYKSTRA: Well, a few years ago, his son Jean-Michel said Jacques Cousteau would be simply heartbroken. But he added that the Captain would still be hard at work, and clearly his legacy continues that work.

CURWOOD: Thanks Peter. Peter Dykstra is with Environmental Health News, that’s EHN.org, and the DailyClimate.org. Talk to you next time!

DYKSTRA: Thank you Steve, we’ll talk to you soon.

CURWOOD: And there’s more on these stories at our website – LOE.org.

Aided by the Sea, Israel Overcomes an Old Foe: Drought

About Jacques Cousteau’s son, Philippe, who died in a seaplane accident

Jacques Cousteau “would be heartbroken” at our seas today