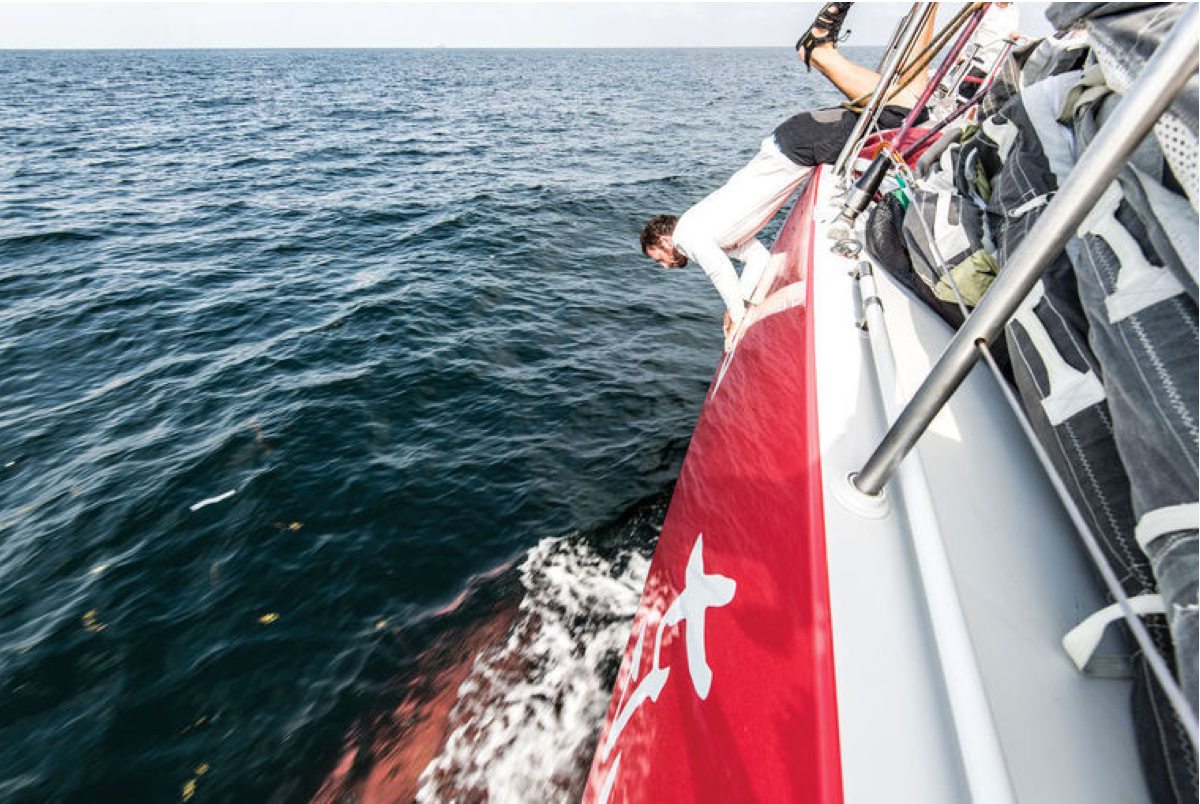 May 15, 2015, the Ocean Summit on Marine Debris takes place during the Volvo Ocean Race Newport stopover. Attendees ranged from the sailing community and scientists to government and policy officials and more, all concerned about the health of our seas and the dangers of waste pollution.Crew member Eric Peron inspects the keel as Dongfeng Race Team sails through a floating patch of trash and debris in the Strait of Malacca during the third leg of the Volvo Ocean Race. (Photo: Sam Greenfield, Dongfeng Race Team)

Since 1973, world-class sailing teams have competed in the Volvo Ocean Race, traveling nearly 40,000 miles around the globe from port to port. In their 9 month sprint, teams face high winds, unfavorable seas, but to their dismay, plastics ranging in size from microbeads to bags and polystyrene mountains are becoming an obstacle and harming marine life. Concerned for the health of seas, Ocean Race organizers along with policymakers, scientists and sailors recently gathered in Newport, RI to discuss the disturbing problem and push for policies that will protect our oceans for future generations.

CURWOOD: It’s Living on Earth. I’m Steve Curwood. The world’s oceans face numerous threats: there’s pollution and coastal habitat destruction related to industry and development, and they are becoming more acidic, thanks to CO2 from fossil fuels that promotes climate change. Fossil fuels are also the basis of plastic, and enormous and growing amounts of plastic are endangering our oceans. Plastics foul our beaches, swirl in vast mid-ocean gyres, kill the seabirds and sea turtles that mistake it for food, and lurk in micro-sized particles that are hazardous to much of marine life.

So this year, in connection with the round-the-world Volvo Ocean Race, policymakers, scientists and sailors recently gathered in Newport, Rhode Island, for a summit on the problem of plastic marine debris. Dee Caffari is part of the all-women racing crew for Team SCA.

CAFFARI: I’ve spent the last ten years having the ocean as my workplace, and I’ve covered a fair few miles. But what saddens me is the amount of waste that I’ve seen increase in my playground. And if I use some the examples from just this edition of the Volvo Ocean race, it is quite shocking. When we came through the Malacca straits we saw numerous volumes of polystyrene. Now, this is floating, this is made by us, used by us, and we can’t dispose of it. Every flat screen TV looked like it had been unpacked in the Malacca straits. 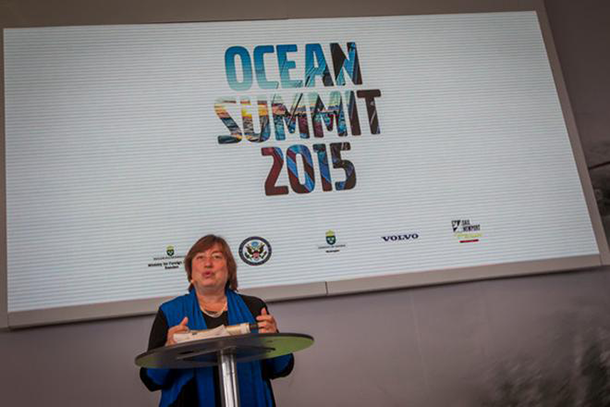 CURWOOD: The basic message of the day was that 80 percent of the plastic in the ocean comes from the land. Catherine Novelli, US Undersecretary of State for Economic Growth, Energy and the Environment, explained.

NOVELLI: This problem of plastic waste in the ocean is a perfect example of what we can all do. Because we know that plastic is useful. It helps health care, food preservation, it can reduce energy use as lightweight packaging, but plastic is the ultimate irony. Because many of these products are created for a single short term use, and then they live on for centuries as trash. So somebody might properly discard a water bottle, a bag from a grocery store, or some packaging that came with a new cell phone, and they can put it in the trash or recycling, but that plastic waste could stay with us for a really long time. And when it’s not properly managed, as you’ve seen, it finds its way into our waterways and ultimately the ocean.

CURWOOD: Laws and regulations can help, and already some localities ban microbeads in cosmetics and cleansers, and ban or charge for the thin plastic grocery bags that have little value for recyclers.
But Sheldon Whitehouse, a Democratic US senator from Rhode Island, held out hope that a more comprehensive federal approach could be adopted. 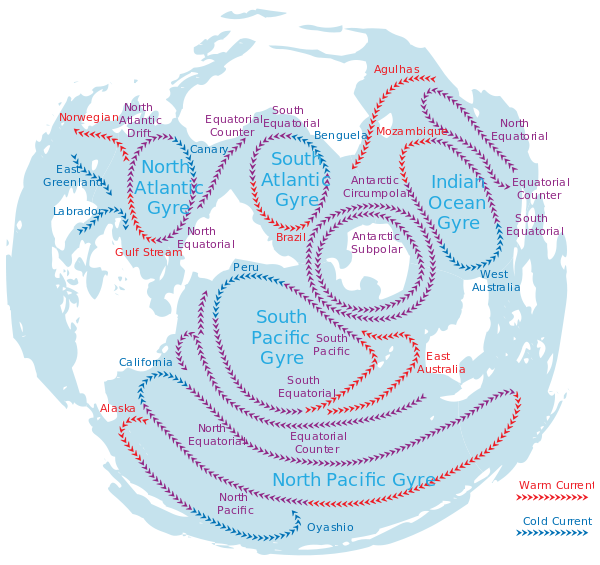 WHITEHOUSE: There is a bipartisan Senate Oceans Caucus. There are a lot of issues we can’t address because some of our colleagues can’t talk about them, but one of the ones we have agreed to address on a bipartisan basis, Senator Murkowski and I are the two leads there, is marine debris. And we are now framing what that agenda is going to be. Our first was IUU pirate fishing. We got four treaties confirmed last year on one day that it had taken nine years to get the previous four treaties confirmed. So we actually have a little bit of a record. So, while we don’t have an answer yet, we do have a live process towards an answer in the Senate that is bipartisan, and I encourage you and everyone else to work with us to put teeth into that and make it work.

CURWOOD: As the Ocean Marine Debris summit moved to a close, Wendy Schmidt of the 11th Hour Project threw out a challenge to turn the talk into action.

More about Catherine Novelli, US Dept of State Under Secretary for Economic Growth, Energy and the Environment