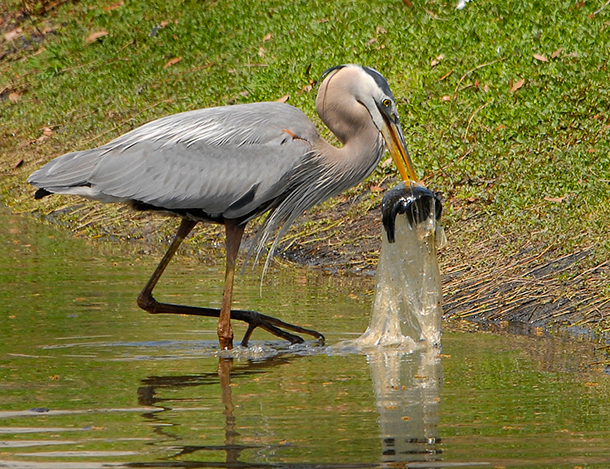 A Blue Heron with a plastic bag. One way to keep plastic debris out of the waterways and ocean is to recycle it. While many nations are still lacking effective recycling programs, Sweden is not one of them. They are able to recycle about 99% of household waste by requiring recycling units within 300 meters of each residential area. But Sweden hasn’t always been so eco-friendly—in 1975 it recycled only about 38% of its waste. (Photo: Andrea Westmoreland, CC BY-SA 2.0)

Plastic is an indispensable material in the daily lives of millions, but as it makes its way into our oceans its global ubiquity poses a serious threat to marine ecosystems. Host Steve Curwood speaks with Dr. Sandra Whitehouse, a biological oceanographer and a Senior Policy Advisor for the Ocean Conservancy, about where most of the pollution comes from and what the United States can do to get a grip on its own plastic problem.

CURWOOD: Now Dr. Sandra Whitehouse is a biological oceanographer and Senior Advisor to the Ocean Conservancy and one of the scientists who presented at the Oceans Summit in Newport. We asked her to explain some of the numbers for us. Dr. Whitehouse, welcome to Living on Earth.

CURWOOD: We're talking about debris in the ocean, marine debris, and much of the concern, of course, is around plastic. So how much plastic are we putting in the ocean these days?

WHITEHOUSE: We have our first global estimate of plastic inputs into the ocean with the publication of the paper in the journal Science, where it was estimated that we're putting in approximately 8 million metric tons worldwide of plastic into our ocean. 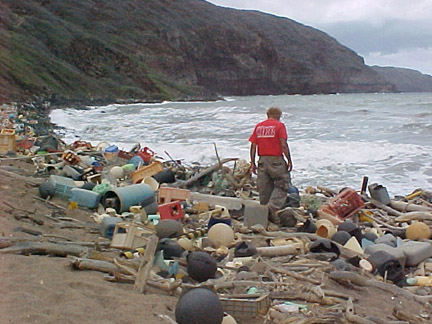 Large amounts of marine debris drift off the land and come together in gyres, circular currents found in each of the world’s oceans. The biggest is the Great Pacific Garbage Patch. Much of the plastic debris is tiny bits of microplastic suspended below the surface in a soupy mixture. As the plastic breaks down, it releases toxic chemicals like bisphenol A that threaten marine life. (Photo: Lindsey Hoshaw, Flickr CC BY 2.0)

WHITEHOUSE: Every year. If we continue on this rapid acceleration of plastic leakage into the oceans, in 10 years we may have one ton of plastic in our oceans for every three tons of fin fish, and that is a frightening prospect.

CURWOOD: Where is all this plastic coming from?

WHITEHOUSE: There are two major sources of ocean plastic. 20 percent is actually still coming from sea-based human activities, direct dumping of plastic in garbage off of boats, fishing gear that's either been lost or improperly discarded, or from containers spilled into the ocean. But what we also know is that 80 percent of plastic is originating from land from the human activities there, and, in that case, it's from a number of different sources. We now know that the 50 percent of the leakage of plastic into the ocean is currently coming from five rapidly developing countries in Asia and Southeast Asia, and those are: China, Indonesia, the Philippines, Vietnam and Sri Lanka. 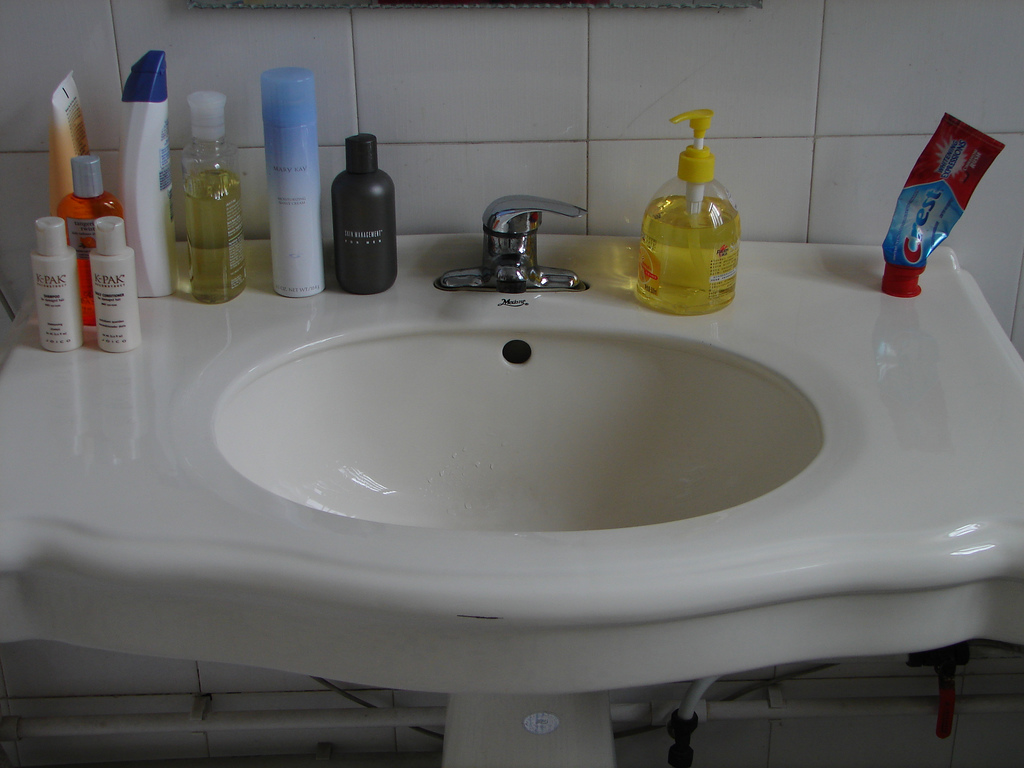 One major source of marine plastic pollution is the tiny microbeads found in everyday products like facewash and toothpaste. Microbeads soak up pesticides, flame-retardants and other harmful chemicals, which can work their way up the food chain from fish to human beings. Fortunately, cosmetic companies are phasing out the use of microbeads in their products. (Photo: JB, Flickr CC BY 2.0)

CURWOOD: So, in round numbers, China puts about 30 percent of this plastic into the ocean. How does plastic get into the water from China?

WHITEHOUSE: In China, it's really a collection problem. There are lots of people who live in rural communities, where the waste management infrastructure consists of only collecting your trash and putting it into a community dump, which is often on a riverbank or close to a waterway.

CURWOOD: Where is the United States on this list of the sources of plastic in the ocean?

WHITEHOUSE: United States is at number 20 on the list.

CURWOOD: That's pretty big number. Why are we in the top 20?

WHITEHOUSE: That is a big number, and it's really for three reasons. One, we have a lot of people living within the coastal area. Two, we generate a fairly large amount of waste on a daily basis. And three, a full 13 percent of that waste is made of plastic.

CURWOOD: Dr. Whitehouse, where are the success stories of keeping plastic out of the ocean?

WHITEHOUSE: Well, I would point to Sweden as being a country that has come further than we have in the United States, in terms of their waste management. For starters, they produce about a fifth as much waste per capita per day, and the proportion of that waste that is plastic is about a quarter what ours is here in the United States. 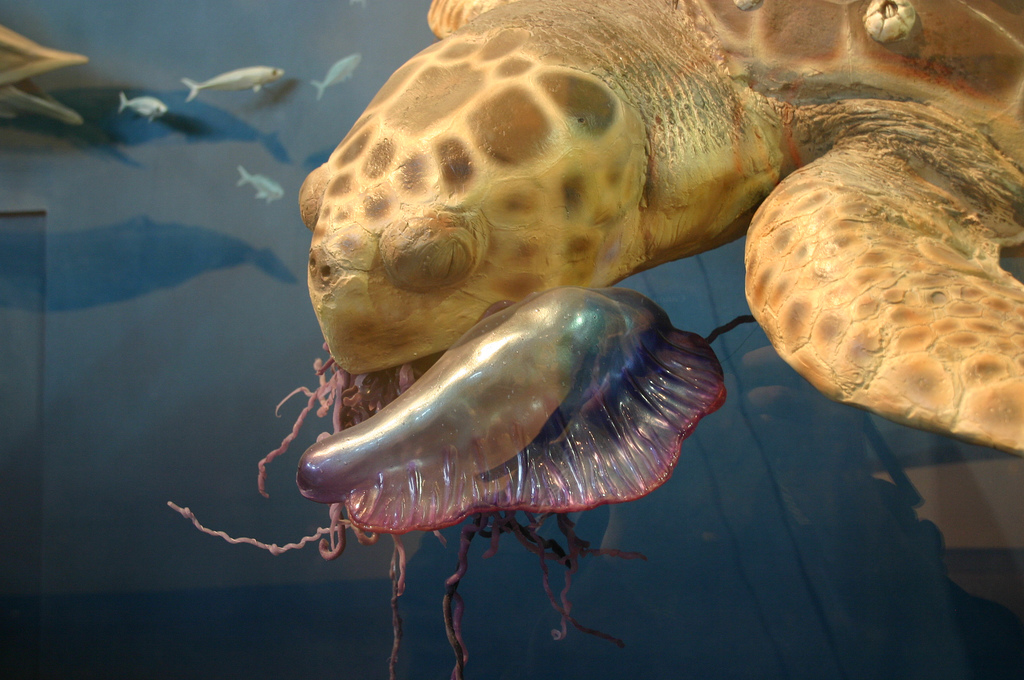 Marine debris has proven particularly deadly for sea turtles since they cannot regurgitate—and plastic bags bear an unfortunate resemblance to jellyfish. When debris breaks down in a turtle’s body, it releases gases that cause the turtle to float on the water’s surface, where it cannot feed or hide from predators. (Photo: Ryan Somma, Flickr CC BY-SA 2.0)

CURWOOD: So what could we do in the United States to improve things, in terms of keeping plastic from getting into the ocean? 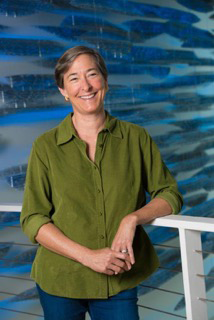 WHITEHOUSE: Well, there's always for improvement in our own ways in management infrastructure. The combined sort of overflow systems in many cities are still somewhat antiquated. We can also continue to reduce littering; however, I think here in the United States, we also have an opportunity, as a developed country, to look at reduction or elimination of some plastic products. We use excessive packaging for many of our consumer products, even including our food, and, as example, I was in the airport last week and I wanted to buy a banana, but it was on top of a Styrofoam tray, wrapped in plastic. Nature's already produced the perfect packaging for the banana. We don't need to put it on a Styrofoam tray and wrap it in plastic. As an innovative, developed country, we can be redesigning our products so they don't include plastic. There's really no reason to have facial scrubs, have the microbeads made of plastic that then get washed down the sink and into the waterways and oceans. We can make products out of different materials. We can't redesign ourselves out of this problem worldwide, but I do believe here in the US we can make some progress with recycling and production.

CURWOOD: Dr. Sandra Whitehouse is a biological oceanographer and a Senior Advisor to the Ocean Conservancy. Thanks so much for taking the time with us today.

WHITEHOUSE: Thank you for focusing on this very important issue.

Plastic debris delivers toxins into the oceans, hurting humans too

Sea turtles are suffering from the effects of marine debris

Sweden recycles 99% of its household waste