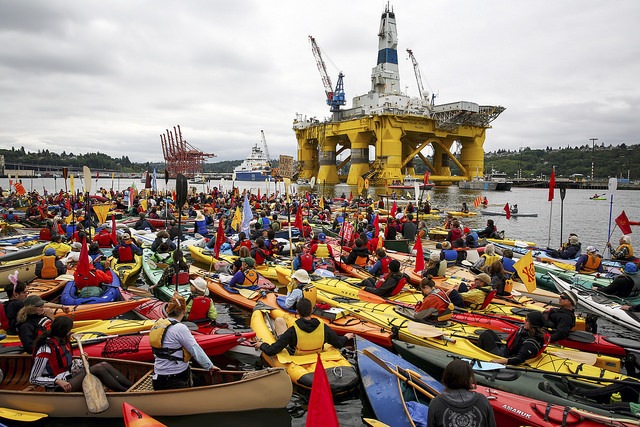 In mid May 2015, hundreds of “Kayaktivists” gathered off the coast of Seattle chanting “Shell no” in protest of the company’s latest attempt to drill for oil in Alaskan waters. Shell’s plan to dock its rigs in Seattle’s harbor was opposed by Mayor Ed Murray and the City Council in addition to environmental advocates. (Photo: Backbone Campaign, Flickr CC BY 2.0)

In this week’s trip beyond the headlines, Peter Dykstra tells host Steve Curwood about recent developments and controversies surrounding Arctic oil drilling. He also looks back 100 years at some influential events and historical figures that kicked off the energy industries, which fuel the economy and ignite environmental concerns today.

CURWOOD: Well, we’ll check up on the world beyond the headlines now. Peter Dykstra keeps a close eye on all the news as part of the team at DailyClimate dot org and Environmental Health News, ehn dot org – and he joins us on the line now from Conyers Georgia – hi Peter!

DYKSTRA: Well, hi Steve, you know, there’s a lot going on in the Arctic in oil and gas exploration, so let me rattle off a few developments.

DYKSTRA: Of course there’s been a lot of attention to Shell’s second try at drilling in the Beaufort Sea off the Northwest Coast of Alaska. Shell’s rig, Polar Pioneer, docked in Seattle on its way up north in May and was hounded by waterborne protesters – “Kayaktivists,” about two dozen of whom were arrested, but the Polar Pioneer is now well on its way to the Arctic with plans to drill in 8,000 feet of water. 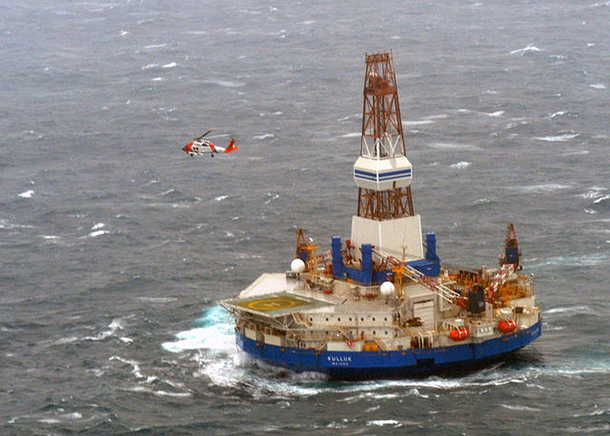 A report written for Fisheries and Oceans Canada suggests that Canada does not have enough data about species in Arctic waters, like Arctic cod, to predict how they would be impacted by an oil spill, if it were to happen. It also warns that drilling operations at depths of over 1,000 feet can create dangerous oil plumes that linger below the water for days. (Photo: Petty Officer 3rd Class Jonathan Klingenberg, US Coast Guard, Public Domain/Wikimedia Commons)

CURWOOD: 8,000 feet, so that much deeper than the ill-fated Deepwater Horizon well in the Gulf of Mexico.

DYKSTRA: Well over a mile deep, in often-brutal Arctic conditions, in the wake of a comical first attempt in 2012 when Shell’s first rig ran aground on the way up North.

CURWOOD: So what could possibly go wrong?

DYKSTRA: I’ll tell ya. There are drilling plans in the Canadian Arctic as well – and the Globe and Mail newspaper got its hands on a government document that concludes Canada is in no way ready to respond to an oil spill in its section of the Arctic. Of course, those same concerns have been raised for drilling off Alaska. But Wait! There’s more!

DYKSTRA: Oil prices are really low right now, with no immediate prospects of a huge increase. Recently, BP, ExxonMobil and Imperial Oil announced they’re suspending their drilling plans for the Beaufort Sea for at least five years, so responding to a Canadian spill may be a moot point for now. Chevron had already made a similar announcement. 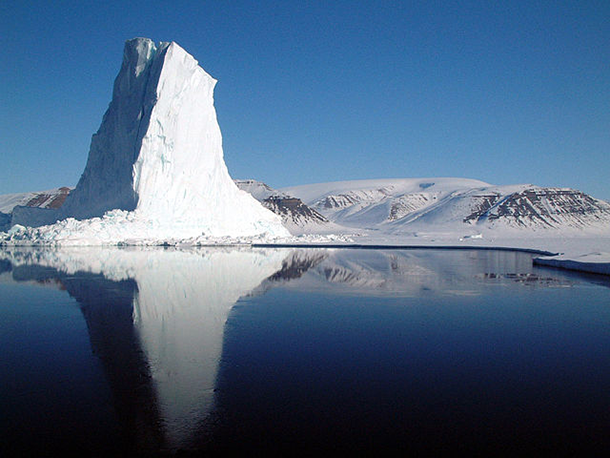 To the elation of Baffin Island residents, a Norwegian-based energy company consortium has called off its plans to perform seismic testing in the eastern Arctic’s Baffin Bay—at least for this summer. Air cannons produce loud booms, which are used to locate oil deposits on the ocean floor. This sonic noise can harm whales, walruses and seals, which the Inuit hunt for food. (Photo: Tech. Sgt. Dan Rea, US Air Force, Public Domain/Wikimedia Commons)

CURWOOD: So can we say things are, well, frozen in the Canadian Arctic?

DYKSTRA: Well, yes and no. Here’s another one. There’s a big split among Arctic natives, some want the development that oil & gas can bring, some want to take no chances whatsoever with jeopardizing Arctic culture – but First Nations communities on Baffin Island in the eastern Canadian Arctic were dead-set against seismic testing – using those booming air cannons that test the ocean floor for oil deposits.

CURWOOD: Which are a potential risk to whales….

DYKSTRA: …And seals, and walrus – the centerpieces of Arctic diet and custom. The oil industry has agreed to postpone the seismic tests for this year, but we’ll see what happens in the future. And one more Arctic note: Russia is also eager to drill in its part of the Arctic, but they’re held back by the worldwide sanctions against the Putin government over its incursion into the Ukraine. We’ll try and keep you posted to what’s happening in the Canadian, the Russian, and the American Arctic.

CURWOOD: Okay. Thanks, and part of the backdrop is the irony that the drilling becomes more possible as the Arctic thaws. All right Peter, take us back into the annals of environmental history.

DYKSTRA: Steve, this past week was the bicentennial of gas

DYKSTRA: Natural gas, to be precise. Captain James Wilson was an upstanding citizen of Charleston, now the capital of West Virginia. This was back in 1815; it was a frontier town. The good captain was drilling for salt brine when he accidentally hit a gas deposit and you know what happened next….

CURWOOD: Let me see, he became an energy millionaire? 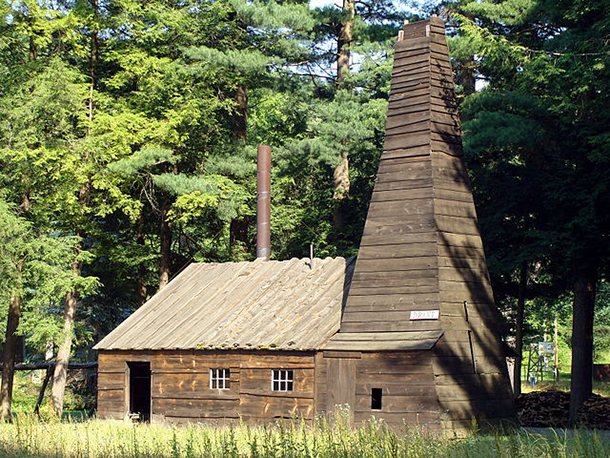 In 1815, Captain James Wilson stumbled upon a natural gas deposit while drilling for salt brine in West Virginia, but opted to stick with the salt business instead of capitalizing on the discovery. Edwin Drake drilled the world’s first oil well 44 years later in Titusville, Pennsylvania. (Photo: Niagara, Wikimedia CC BY-SA 3.0)

DYKSTRA: No, the well blew up, and according to a historical account, the Captain “did not dare to tempt Providence” and drill any further because he was a salt brine man, he wasn’t going into this explosive stuff. Anyway, the salt brine went to Charleston’s growing salt works business, and a few years later, coal took hold in West Virginia, they used the coal to turn the salt brine into chlorine chemicals which also became a business fixture there. Edwin Drake discovered petroleum a few hundred miles north in 1859, others eventually came back to large-scale natural gas wells, and fast-forward to today when we’re planning to drill for oil in the warming Arctic, we’ve removed entire mountains for coal in Appalachia, and we’re fracking for oil and gas all over the map.

CURWOOD: And while that captain didn’t dare tempt Providence—in the Arctic, and elsewhere--I guess we do. Thanks Peter! Peter Dykstra’s with Environmental Health News, that’s EHN.org and thedailyclimate.org. We’ll talk to you again soon.