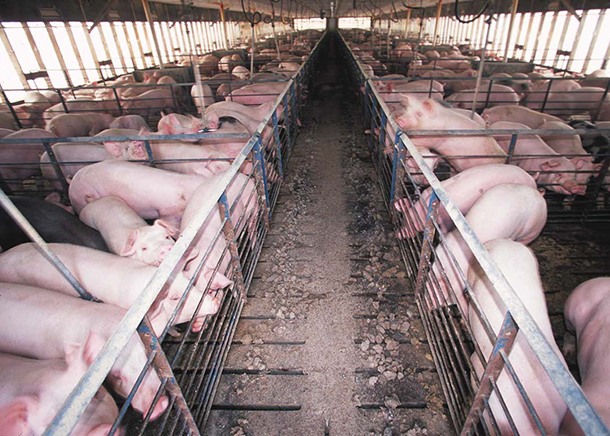 In North Carolina, millions of hogs are confined to small spaces on farms. Their waste is collected in lagoons, and storms in the area cause them to overflow and flood nearby towns. (Photo: EPA)

CURWOOD: Let’s dig down beyond the headlines now with Peter Dykstra, who keeps a sharp eye on all the news whether it’s fit to print or not. Peter’s with Environmental Health News, that’s EHN.org and the DailyClimate.org, and joins us on the line from Conyers, Georgia. Hi there, Peter.

DYKSTRA: Hi, Steve. I was really struck by a recent piece on the Quartz website about hog waste, pollution, environmental justice and really, really bad smells in North Carolina. I learned a few things. Most of them not so good.

DYKSTRA: The good news is on the jobs and money end. There are an estimated 46,000 full time jobs in an $8 billion a year hog economy in North Carolina, and the industry is fond of saying it can smell the money. Fair enough, but what many residents of the hog belt get is quite a different smell. In one county alone, Duplin County, hogs produce twice the waste as the city of New York. That’s according to an environmental group’s estimate, since the state and the hog producers are a little shy about releasing the poop numbers.

CURWOOD: Wow, twice the waste of New York City from just one county’s hog farms. And this has been a problem for a long time right?


Seabird populations like the Northern Gannet are good indicators of marine ecosystem health. A recent study published in the journal PLOS ONE found that of the seabird populations monitored around the world, 70% have declined since the 1950s, which is likely a symptom of several underlying problems. (Photo: Mike Pennington; CC BY-SA 2.0)

DYKSTRA: Yes, and that’s the thing that really got me. This was a huge issue in the 1990’s, when heavy rains from several hurricanes caused huge hog waste spills. In 1995, the Raleigh News & Observer ran a series about pollution, environmental justice, and the clout of the hog industry in the state. The series won a Pulitzer Prize, and after an uproar, the state blocked the creation of new hog farms, but the industry found a workaround, and the environmental problems remain.

CURWOOD: So what’s the workaround?

DYKSTRA: If you can’t have more hogs, then make bigger hogs. In the past quarter century, according to government data cited by Quartz, the average size of a North Carolina hog brought to market has increased 27 percent, to 275 pounds. Bigger hogs, more waste; more waste, more smells and possibly more spills.

DYKSTRA: I’ve always thought one of the coolest things about seabirds are how some species feed by diving like a bullet into the water. Gannets are the best. But a study from the University of British Columbia says that globally, seabird populations have taken a startling dive: a nearly 70 percent decline since the 1950’s, according to a study that estimated the population trends of 500 seabird species.

CURWOOD: Whoa. What do they attribute this to?

DYKSTRA: Let me count the ways: overfishing of the fish seabirds need; seabirds get snagged in fishing nets and on longline fishhooks; marine pollution, loss of habitat, invasive species that impact seabird nesting areas, climate change and more. I could keep going.

CURWOOD: You are just a bundle of good news today, Peter. Any positive takeaways from all this?

DYKSTRA: Well, maybe that science has done its job in identifying a big problem and its sources. Now comes the messy business of policy and ocean politics to hopefully find a fix—or multiple fixes – and reverse the trend in seabird decline.

CURWOOD: Huh, OK – hey now it’s time for you to take us back into the realm of environmental history. What do you have this week?

DYKSTRA: Well I have a little recent history. We’re at the one-year anniversary of one of those little lessons you learn from history, in fact. The State of Ohio’s EPA met with city officials in Toledo to warn them that Toledo’s water supply was ill-prepared to cope with the algae bloom building in the western part of Lake Erie. It wasn’t just the state issuing warnings. A veteran environmental reporter named Tom Henry had been writing about this for over fifteen years – that’s another issue where the warnings go back to the twentieth century!! 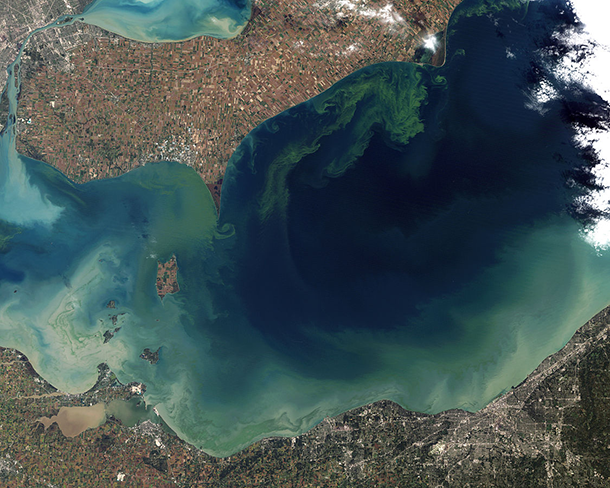 In 20111, torrential rains around the Lake Erie increased fertilizer runoff, which promoted the growth of the microcystin-producing bacteria, causing the worst cyanobacteria bloom seen there in decades. Cyanobacteria is often referred to as blue-green algae, and large blooms can be from space.(Photo: NOAA)

CURWOOD: And as I recall it wasn’t too long after this meeting that Toledo had a little problem.

DYKSTRA: If by “little” you really mean “enormous,” yeah. Five hundred thousand metro Toledo residents had their water supply shut down for two days last August when toxic algae clogged the city’s drinking water intakes. It was an important reminder that Lake Erie, a recovering poster child for large-scale water pollution, still has some big issues.

CURWOOD: And that story dominated the headlines, including here. So what’s the algae outlook for August 2015?

DYKSTRA: The initial forecasts by NOAA and the state were for a fairly mild year. But after a wildly rainy month of June in the Great Lakes region, forget that: NOAA now calls for a worse algae bloom in August than last year’s. So stay tuned.

CURWOOD: We shall. Peter Dykstra is with Environmental Health News, that's EHN.org and the DailyClimate.org. Thanks for taking the time, Peter.

DYKSTRA: OK, Steve, my pleasure. We'll talk to you soon.

The News & Observer’s series Boss Hog: The power of pork

The decline of the world’s seabirds