At Risk the Pangolin- A Mammal With Scales 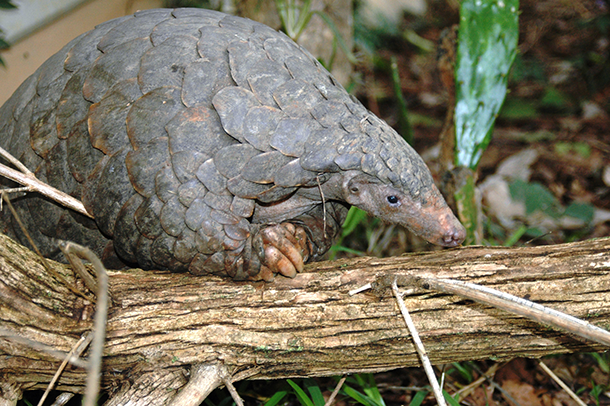 There are eight species of pangolin: four are native to Asia and the others to Africa. They are generally nocturnal, solitary creatures, whose diet consists mostly of ants and termites. (Photo: Tikki Hywood Trust)

The pangolin is the world’s most illegally traded mammal, poached by the hundreds of thousands from Southeast Asia and African savannahs and sold in Asia as medicine. But a market for this scaly anteater exists in the US too, and with little protection here, trade is helping to push them towards extinction. Host Steve Curwood speaks with the Center for Biological Diversity’s Sarah Uhlemann about the pangolin’s global decline and why US protections under the Endangered Species Act are necessary to help save this unique creature.

CURWOOD: It's Living on Earth. I'm Steve Curwood. Quiz time now - what’s the mammal that tops the illegal wildlife trade? If you answered the elephant – or rhino – or tiger, you certainly fingered some of the planet’s most threatened and charismatic creatures, but according to the Center for Biological Diversity there’s one mammal more trafficked than all of these combined. It’s a scaly anteater called the Pangolin. Now there’s a new push to protect Pangolins, by adding them to the US Endangered Species List. Sarah Uhlemann of the Center for Biological Diversity joins us now.
Welcome to Living on Earth.

UHLEMANN: Thank you I'm so grateful to be here.

CURWOOD: So this is the most trafficked mammal in the world, as I understand it. What is it?

UHLEMANN: So this really is one of the coolest and most bizarre animals that I know of. They're mammals; they're about the size of a cat, they're essentially anteaters. They have a tongue that's about the size of their body. They range in different shades of brown, and they're covered literally from tip to tail with these large scales. So they sort of have this geometric look to them. Adorably odd, I would say, kind of like tanks with tails, and what really adds to their cuteness is unfortunately a factor in their demise, and that's their self-defense mechanism. When these little guys gets scared, they essentially roll up into a little ball and this is a very effective defense mechanism against, say, a tiger. They can't really chew through the Pangolin scales, but it makes poaching a breeze. You just scare the little guys, they roll into a ball, pluck them up in your bag and off you go.

CURWOOD: And why is it so endangered? 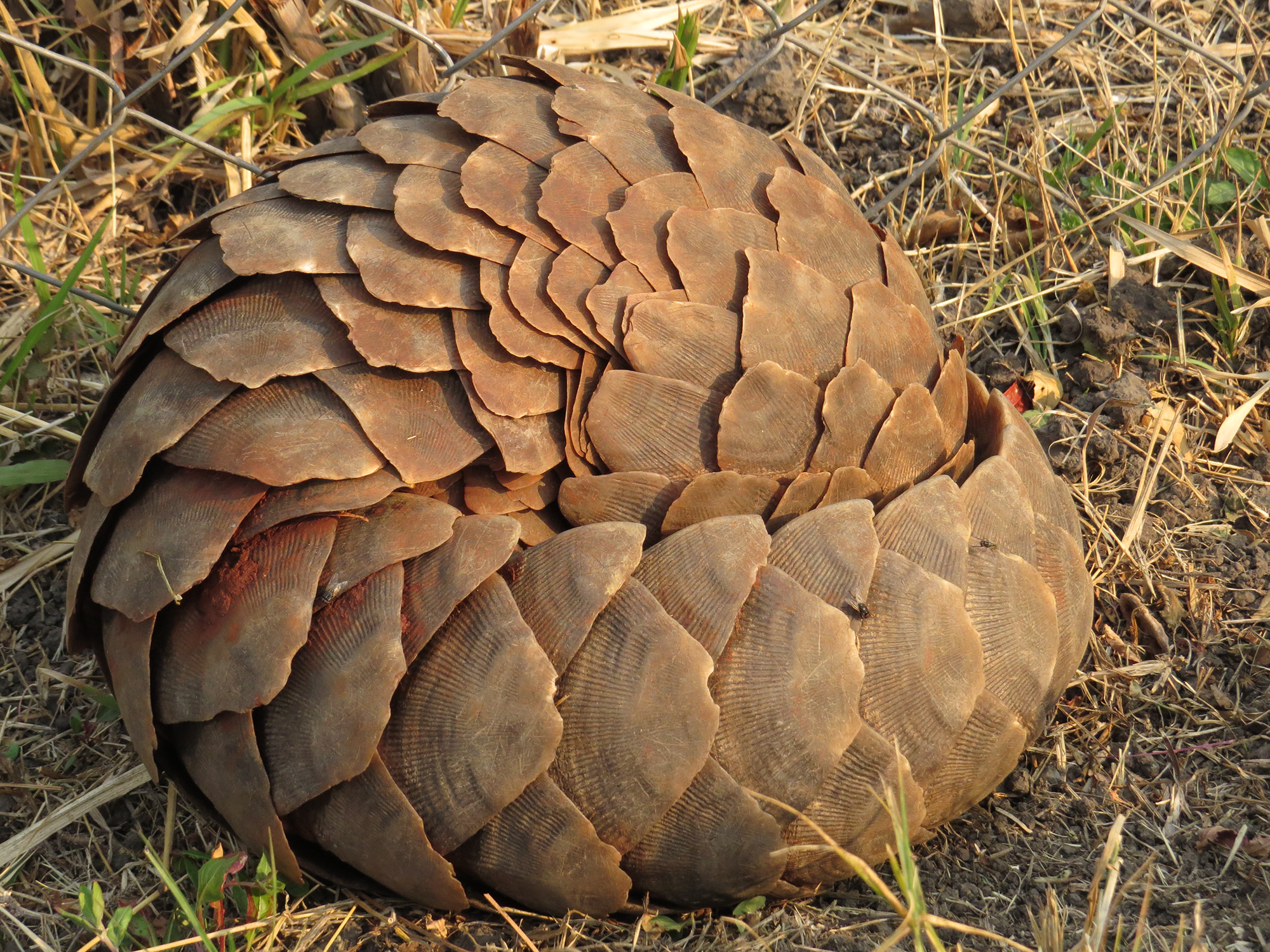 "Pangolin" comes from the Malay word "pengguling", meaning "something that rolls up". When pangolin are frightened, they roll up into a tight ball. Their tough keratin scales protect them from animal predators, but this defense mechanism does little to protect them from poachers. (Photo: Tikki Hywood Trust)

UHLEMANN: Well, they face two threats and they're both from human consumption. One is that their meat is considered a delicacy in China. They're also sometimes eaten as bushmeat in Africa, but it's really consumption in China that's the problem. The second way that they're consumed is that their scales are used in Asian medicine. They're made of keratin, so exactly the same thing that your fingernails are made out of. So it supposedly treats a variety of ailments, everything from dispersing congealed blood to promoting menstruation, dispelling stiffness and swelling, healing liver problems. But I really want to emphasize that there's absolutely no scientific evidence that Pangolin scales have any medicinal benefits.

CURWOOD: Where are these being trafficked to?

CURWOOD: So give me some numbers here. How many are being trafficked and how many are left and how fast are they in the process of going away?

UHLEMANN: There are some things we don't know about Pangolins. They are a species that scientists have just started researching. But what we do know is they are in very severe decline. One example I can give you is the Chinese Pangolin. This is the species that has already suffered to severe declines and if trends continue, we're supposed to have 90 percent of them disappear in the next 20 years. That's getting awfully close to extinction. So we don't really have a great estimate for how many there are existing left unfortunately, but what we do know is that over the past decade about a million have been taken out of the wild and our new research indicates that about 960,000 of those were illegally trafficked, making them of course the most illegally trafficked mammal in the world. But these species may disappear before most people even know that they exist, or ever even heard of them.

CURWOOD: So what are we talking about in terms of money? What do people get?

UHLEMANN: So there is an increasing market, it seems, for Pangolins given the increasing price of them. Right now you can get a kilogram of scales for about $600 US and that's twice the amount that they were going for back in 2008.

CURWOOD: So what's the international protection of these animals?

UHLEMANN: Well, right now there are four species of Asian Pangolins and all of those Pangolins are protected against commercial trade by the CITES treaty, this is the treaty that prohibits commercial trading of endanger species. Despite these protections, however, illegal trading of Asian Pangolins is absolutely rampant. We're seeing a vast increase in both the numbers of seizures, but also the numbers of animals actually found in those seizures.

Unfortunately, the four species of African Pangolins have absolutely no protections at this point. As the demand for Pangolin scales is increasing in Asian, most of the Asian Pangolins have virtually been exterminated. So the eyes of trade have unfortunately turned to the African Pangolin, so we're seeing a lot more of those species declining as well. However, when the Pangolin scales are ground-up powder, which is the form that they're most traded in, you can't tell the difference between an Asian protected penguin and a non-protected African Pangolin.

CURWOOD: Now, your group and some others have petitioned to list the Pangolin under the Endangered Species Act, so how likely is it that you'll get that listing, and what would be the outcome of the Pangolin?

UHLEMANN: That's right. My organization, the Center for Biological Diversity as well as our colleagues have petitioned to list the seven species of Pangolins as endangered under the US Endangered Species Act. There is already one species of Pangolin, the Temminck's Pangolin that is currently listed as endangered under that act. We are very hopeful that the US Fish and Wildlife Service will agree with us because Pangolins are in deep, deep trouble, and we're going to lose them very soon if we don't seek their protection very soon, but I think if people realized that their choices were potentially extinguishing the existence of this incredible species that they would change their choices and not be purchasing Pangolins anymore. So part of what the Endangered Species listing is going to do is really raise the profile, and raise awareness about the Pangolin and its threats.

CURWOOD: Sarah Uhlemann is International Director with the Center of Biological Diversity. Thanks so much for taking time with us today, Sarah.

UHLEMANN: Well, thank you so much Steve, I really appreciate it. 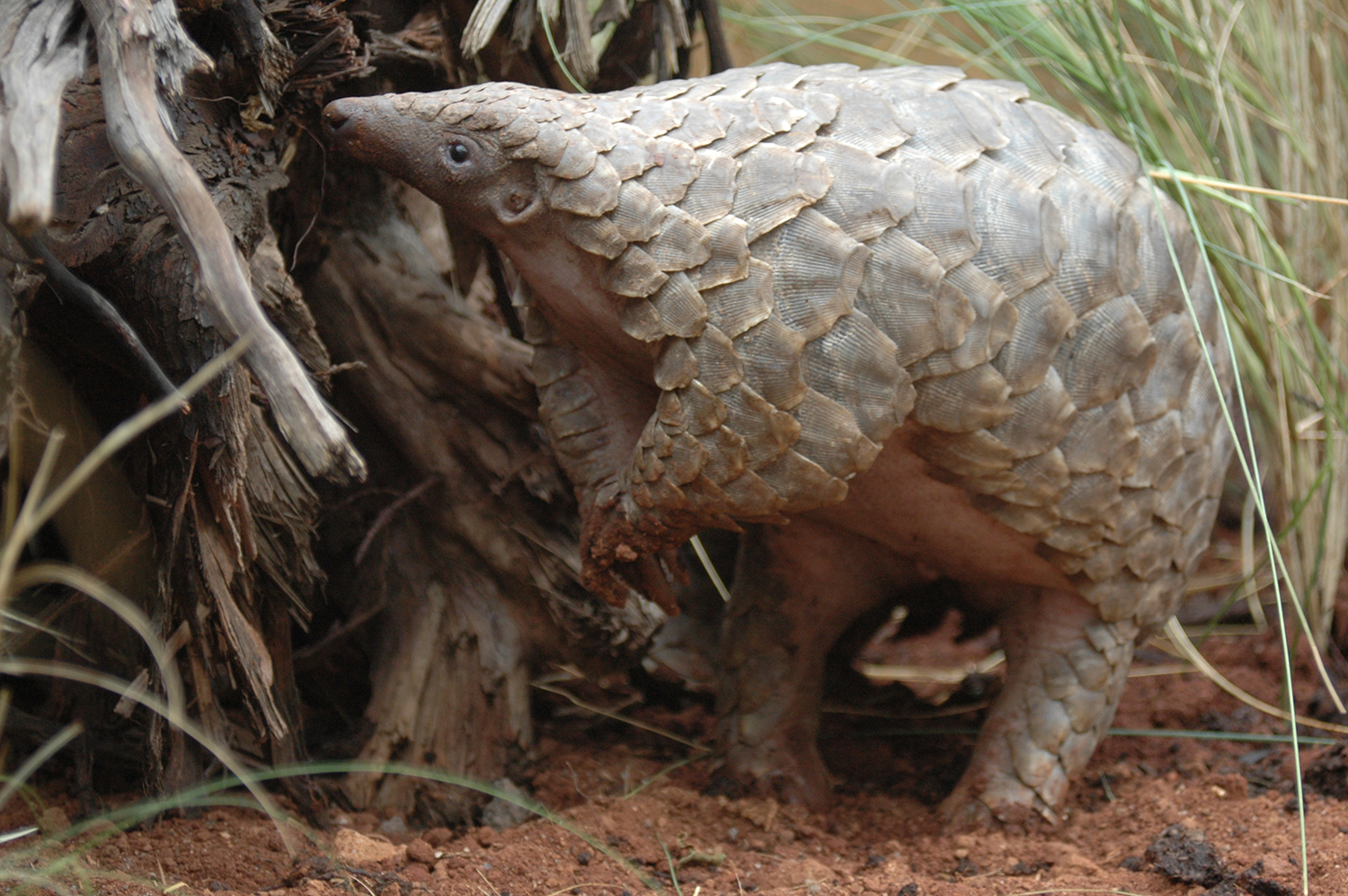 Pangolin have tetrapod claws. Their front claws are long and good for digging to find insects, but they would make walking difficult. In order work around this, pangolin tuck their front claws under and walk somewhat upright on their hind legs. Their long tail helps them to balance. (Photo: Tikki Hywood Trust)

Rich Chinese are literally eating this exotic mammal into extinction

A Struggle to Save the Scaly Pangolin