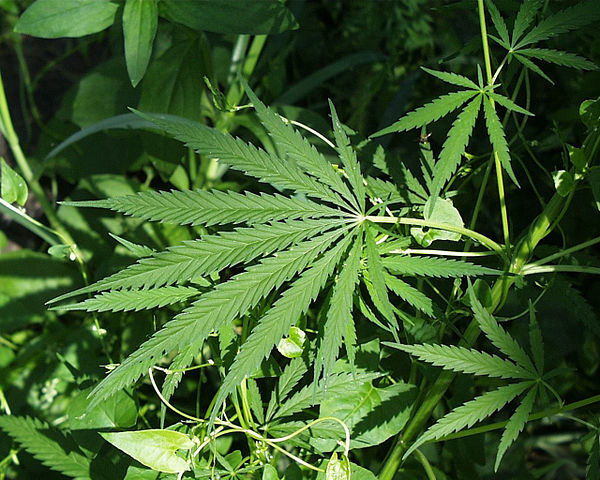 Marijuana: The USDA might not be springing to certify 'organic' marijuana just yet, but some growers say it's time for pesticide-free pot. The Clean Green certification program hopes to discourage growers from spraying pesticides to fight pot pests like spider mites and root aphids—these chemicals often contain neurotoxins and carcinogens. (Photo: US Fish and Wildlife Service, Wikimedia CC Public Domain)

In this week’s trip beyond the headlines, Peter Dykstra tells host Steve Curwood about how limiting coal power plant emissions has led to lower mercury levels in bluefish and describes a new certification program that encourages marijuana growers to use environmentally-friendly, organic farming practices.

CURWOOD: Time to check in now with the world beyond the headlines with Peter Dykstra. Peter’s part of the team at Environmental Health News, that’s EHN.org and DailyClimate.org, and he joins us on the line from Conyers, Georgia. Hi there, Peter.

DYKSTRA: Hi, Steve, I know when we talk about environmental headlines, not all of them are cheerful, so let’s start with a success story about one of my favorite ocean fish: Bluefish. They’re abundant, relatively cheap in the store, they can be particularly difficult on the hook if you catch them yourself and to me they’re tasty, though they’ll stink up the house if they aren’t absolutely fresh when you cook 'em. The good news is what’s being found in Bluefish in smaller quantities: mercury levels in Atlantic bluefish have dropped by about 40 percent in the last few decades.

DYKSTRA: Coal burning is the major cause of mercury deposition. Clean air regulations have helped cause a sharp drop in mercury emissions from coal plants, and the current dismal economic picture for coal means there are fewer coal plants in operation. Smokestack mercury from coal plants comes back to Earth, much of it’s dropped in the oceans, and some of that ends up in fish. A study in the journal Environmental Science and Technology reports that bluefish caught off the North Carolina coast recently have a dramatically lower amount of mercury than fish caught in the same waters in 1972. The researchers were quick to credit pollution limits on coal burning for the improvement. 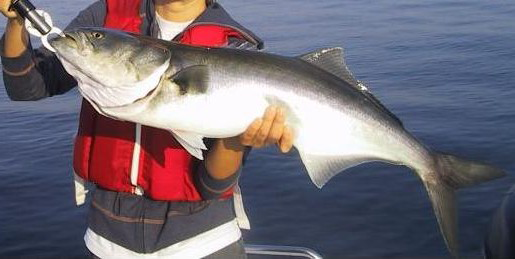 Mercury concentrations in bluefish have decreased by more than 40% since the emergence of clean air regulations in the 1970s aimed at coal-fired power plant emissions. Scientists were surprised by the quick results; they didn't expect to see any changes for over a century. (Photo: CyberAnth, English Wikipedia CC BY-SA 3.0)

CURWOOD: So, good news all around. What’s next?

DYKSTRA: Let’s do a little mythbusting, or maybe it’s icon-busting. If you go back a few decades, we tend to think of the dawn of the environmental movement and the dawn of marijuana culture as closely related.

CURWOOD: Yeah, but we’ve heard an awful lot about how pot-growers can be a real downer for the environment.

DYKSTRA: Absolutely, we have. Today, many cannabis growers stand accused of massive water and electric use, damage to streams and wildlife, overuse of pesticides and more, all at a time when recreational marijuana use has become legal in four states and the District of Columbia, and they’ll possibly be passing the, uh, torch to other states in the next few years. Enter the Clean Green certification program for marijuana farmers.

DYKSTRA: According to Clean Green, they’ve received paperwork, inspected, and certified nearly a hundred Oregon pot farms for environmentally responsible farming methods, water conservation, and limiting pests without pesticides. They say the goal is to meet US government standards for “organic” crops. But the USDA isn’t yet in the mood to certify a crop that the US government still says is illegal, so we’ll see how it all comes out when the smoke clears.

CURWOOD: So, I guess some day we’ll see a Blue Ribbon Weed at the state fair?

CURWOOD: [CHUCKLES] Hey, what have you got for us on the history calendar this week?

DYKSTRA: Forty years ago, in August 1975, Edward Abbey published his novel “The Monkey Wrench Gang,” about a band of misfits with a passion for the landscape of the American West. They were led by an ex-Green Beret named George Hayduke who returned from Vietnam to find his favorite place threatened by development.

Hayduke and his gang deployed sabotage in the name of protecting nature, but a few years later, Abbey’s fiction became fact for Earth First!, whose activists used sabotage to oppose development near wilderness.

CURWOOD: Yeah and to this day they’re heroes to some, domestic terrorists to others.

DYKSTRA: There’s a new documentary making the rounds, screening over the next few months at venues throughout the West. It’s called “Wrenched,” and it’s about the real-life versions of George Hayduke.

Edward Abbey wrote several other books, notably one called “Desert Solitaire,” which was written seven years before the Monkey Wrench Gang. It’s where Abbey first pours his heart out about his love for the West. He died in 1989, was reportedly buried on public land in a sleeping bag, and rests beneath a headstone that reads “No Comment.”

CURWOOD: How can you top that?

DYKSTRA: Well, this doesn’t top it, but I need to correct some info I gave a few weeks ago in a segment on Arctic oil exploration. Shell is hoping to drill in a portion of the Arctic known as the Chukchi Sea, off the Northwest Alaska coast. Several hundred miles to the east, several other oil projects are on hold in the Beaufort Sea, off Canada’s Northwest Territories. The Shell rigs will be in fairly shallow water, not in the deep ocean as I said. I should know better. Thanks to a listener in Fairbanks, Alaska for straightening me out.

DYKSTRA: Thanks, Steve, talk to you soon.

Earth First!: Media from the Frontlines of Ecological Resistance