Rafting Down The Unbound Elwha 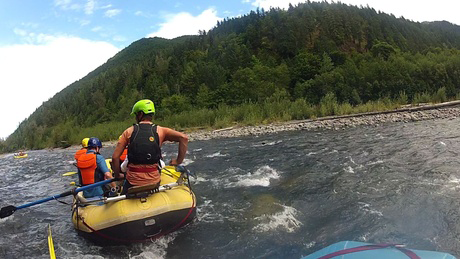 Now that the dams are gone, rafters are enjoying the changing Elwha River. (Photo: Ashley Ahearn)

The National Park Service has finished removing the last dams that blocked the Elwha River for over a century in Washington’s Olympic Peninsula. The river now flows freely, open once more for salmon, otters, bears and rafters. Ashley Ahearn of EarthFix takes us for a ride down the river.

CURWOOD: From the Jennifer and Ted Stanley Studios in Boston and PRI, this is an encore edition of Living on Earth. I’m Steve Curwood. We have a special show today that focuses on rivers, their value and their health. By 2015, more than a thousand dams had been torn down across the US, but the largest and, at $325 million, the costliest were two massive hydropower installations on the Elwha River. The Elwha runs through the Olympic National Park in Washington state, and after a century with dams, now flows freely all the way to the sea, and allows fish to swim upstream. Over the decades biologists, conservationists and Native Americans convinced Congress that the value of the dams for electricity was far less than the value of the Chinook salmon and steelhead trout that can now once more can swim deep into the forest to spawn. Soon after the dams came down, Ashley Ahearn, from the public media collaborative EarthFix, took to the water to experience the river unbound.

AHEARN: If you were going to, say, try to raft a river while holding a microphone, Morgan Colonel is the guy you want at the helm. He’s been a river guide for ten years. 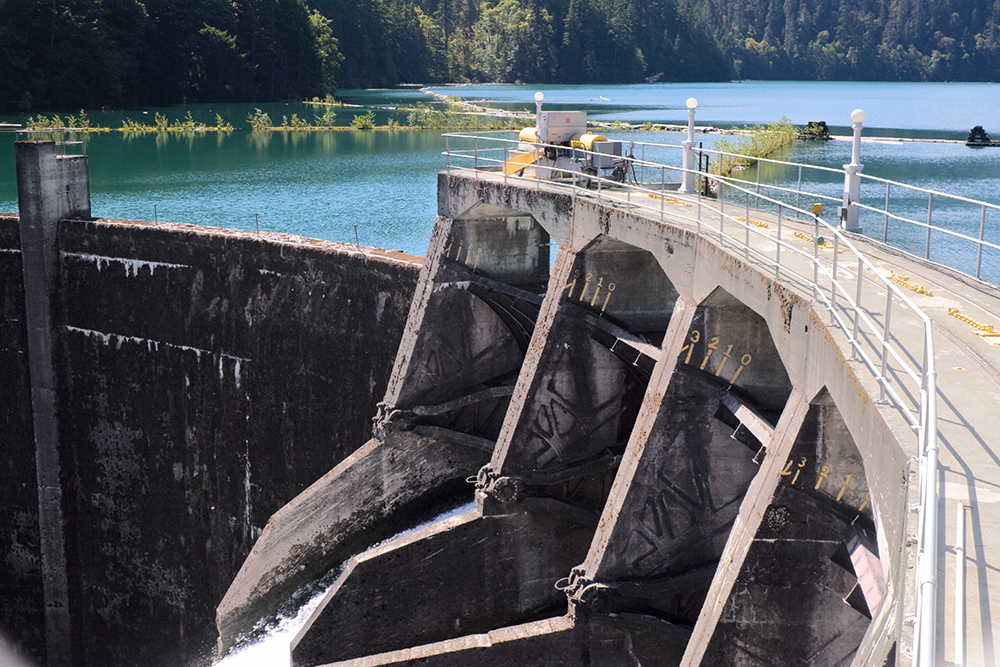 COLONEL: Alright, gang. Who wants to get the wettest?

AHEARN: Colonel runs Olympic Raft and Kayak. He bought the company three years ago when he heard the Elwha dams were coming out and he’s had a front row seat to watch the recovery process ever since.

AHEARN: Colonel says the river’s changed a lot. New channels come and go as the Elwha twists back and forth across her bed, trying to find the fastest way to the Strait of Juan de Fuca.

COLONEL: We’re kinda just figuring it out a little bit as we go. Brand new river to pioneer.

AHEARN: Salmon are starting to come back. This summer, state fisheries’ biologists counted more than 1,500 King salmon above the former site of the lower dam, and the otters, eagles and bears are catching on.

We head into a rougher patch of river as Colonel tells a story about the demise of one sockeye salmon at the hands of a mama otter and her pups, not too long ago.

The otters cornered the fish in a small eddy of the river but it escaped and took off downstream.

COLONEL: That otter was on it. I mean, from the word “go,” that mom headed downstream, but then five minutes later she comes back up holding the sockeye by the mouth. And that sockeye was about as big as her.

AHEARN: Millions of tons of sediment have been released from above the dams, creating sandy beaches where there used to be rocky shoreline. 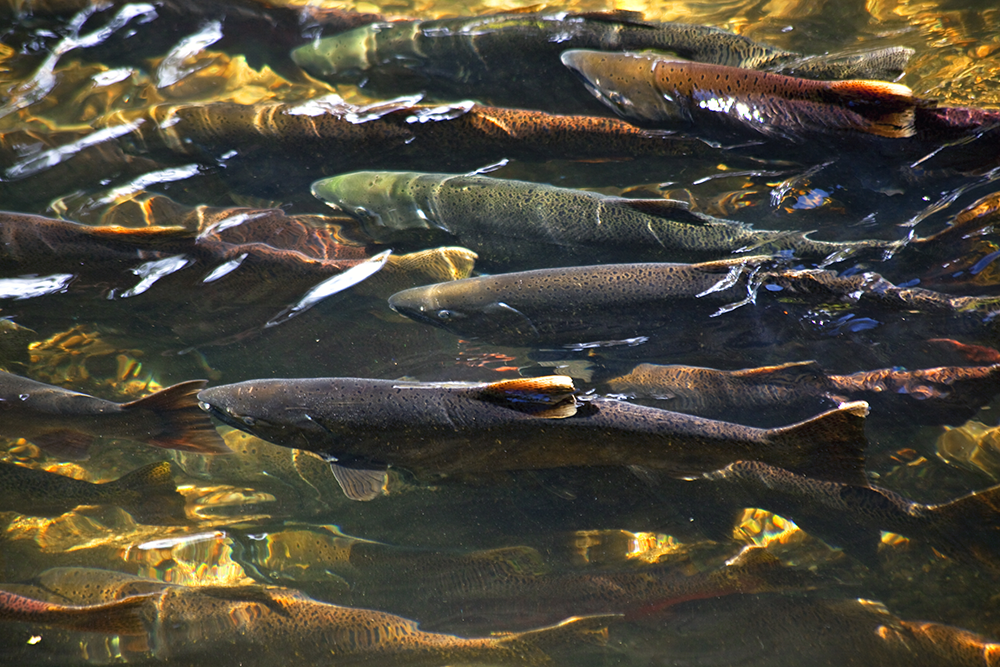 Rob Elofson joined Colonel to run the river today. He’s a member of the Lower Elwha Klallam tribe, which has been pushing for dam removal for decades. This is the first time he’s rafted the river since the dams came down. As the group paddles along, Elofson points out that the river is already looking more salmon friendly.

AHEARN: We round a bend and the water grows louder as it rushes into a tight curve, flashing with rolling white caps. This stretch of river is known as Ferngully, Colonel explains.

COLONEL: This is going to be our best rapid of the day. This is the fun…can be class three in higher water, probably class two plus right now.

AHEARN: We come out of Ferngully and the water slows, beautiful and clear beneath us. We’re above where the lower dam used to be, scanning the water for intrepid salmon, which have made it into this newly accessible territory to spawn. Nothing yet. We float quietly.

SCHMIDT: There’s one. I saw something shadowy. 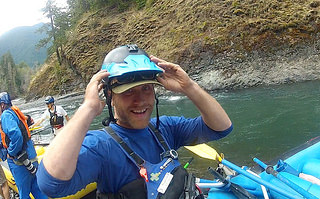 AHEARN: Kati Schmidt spots a sockeye salmon. She’s with the National Parks Conservation Association. The gleaming flash of red darts beneath us, headed upstream and into the Ferngully rapids.

AHEARN: Now that the dams are gone, that sockeye could be the mother, the grandmother, and someday the great-grandmother of countless generations of salmon to come—all free to colonize the Elwha, once again. 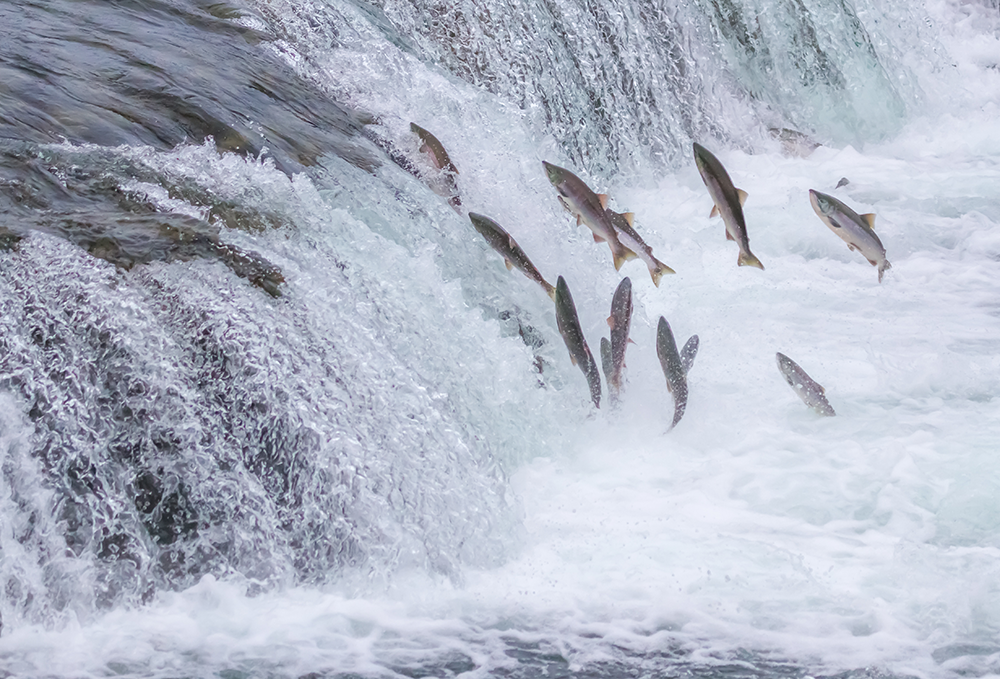 Since the removal of the first dam, the salmon have been coming back. (Photo: Bigstockphoto)

AHEARN: Whew, we made it.

CURWOOD: To see a video from Ashley’s trip down the Elwha, paddle over to our website, loe.org.


Learn more about the Elwha River Restoration project from the National Parks Service.

To measure the effects of the dam’s removal, biologists made baseline assessments of the ecosystem in 2011.

Ashley Ahearn brought us into a hatchery in 2011 to explore another facet of this project.

Destruction of the first dam filled the river with sediment—and the fish thrived. Hear more here.