During the salmon run, writer Mark Seth Lender kayaked to the mouth of a river in British Columbia. As he watched, a female black bear and her cub stepped out upon a nearby promontory, her eyes on the fish in the river. Later a massive male appeared, and they made way for him. (Photo: Mark Seth Lender)

During the salmon run, writer Mark Seth Lender kayaked along a river in British Columbia. As he watched, a large black bear stepped out upon a nearby promontory, his eyes on the fish in the river. A mother and baby bear, also hungry for salmon, make way for the massive male.

CURWOOD: Well, once the salmon start running up the rivers of the west, it’s not only fishermen that look to a bountiful harvest – bears do too. But as Mark Seth Lender observed at British Columbia’s McKenzie River, a plentiful supply of salmon doesn’t make bears less watchful and cautious.

Here is the daybed he made; the reeds flat as a sheet for the space of 10 feet. He’s just the right size to lie in it. That head, the shoulders it slouches into, front legs like two angular granite monuments, black hair thick as a shag rug and the edges silver, shimmering. He came up the beach at a shambling pace, over mussels and hard white barnacles clinging to the rocks like glass-embedded crenellations. He crossed the estuary at the shallows, downstream from where the river pours out of the heavy woods. Then up the bank. And paused. Looking left, looking right, and along the grassy knoll and down to the promontory where he now stands. Staring. At me. Eyebrows raised in a kind of question mark. Eyes open wider than they should be. Chin lifted, a little. An expression you might take for surprise. It isn’t. 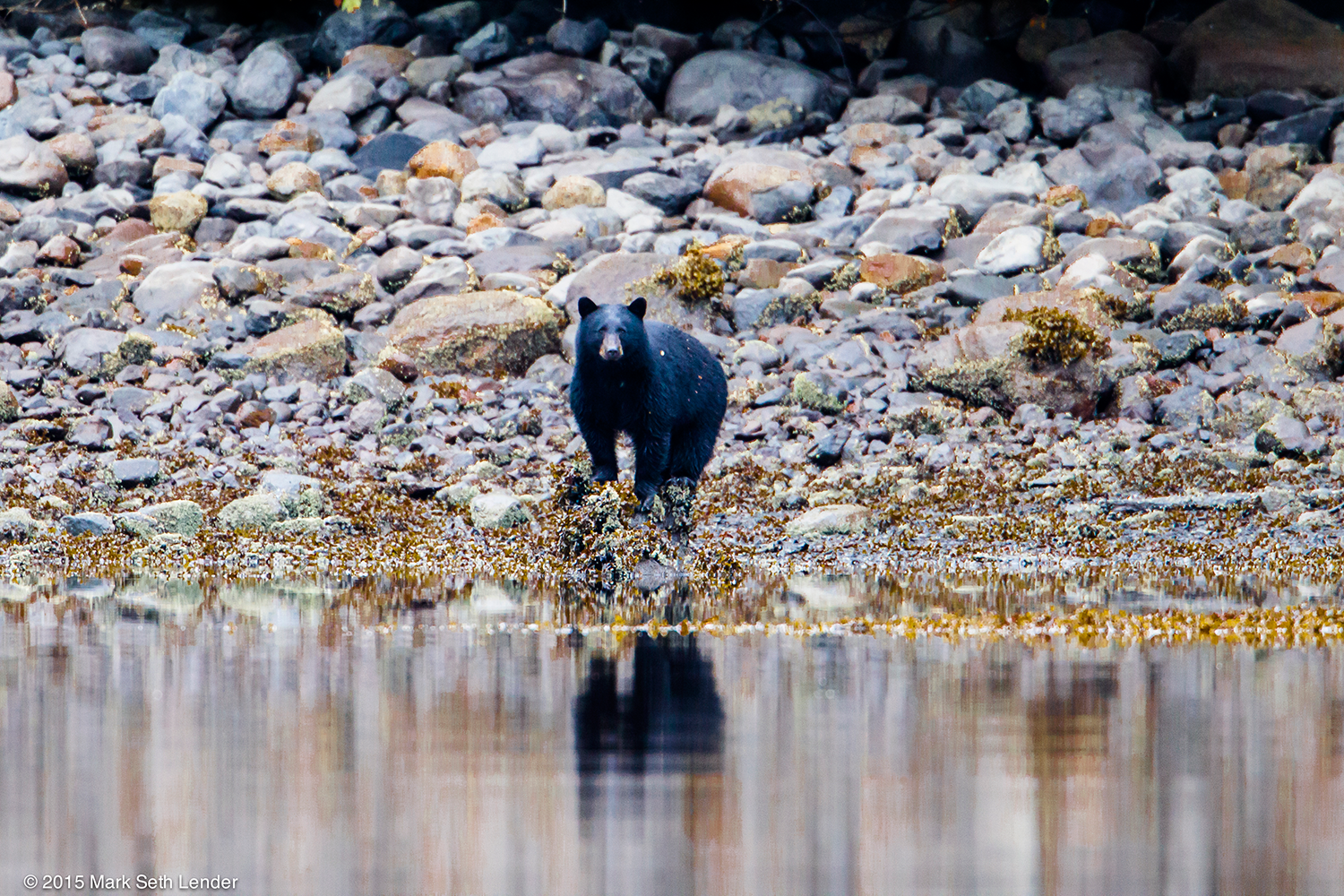 Yesterday another smaller bear black as a lump of coal, was fishing for salmon, right there; paw raised, leaning way out, all his attention on the river and the motion below – until he realized he was not alone. Hungry as he may have been, he ran. Suddenly. That’s what they do. Small Bear from Big Bear. All bears from us.

Big Bear? He missed that part in Bear School…

And I am glad of the hundred meters of glass-green water between us. He kneads his claws in the sand, and never takes his eyes off me. 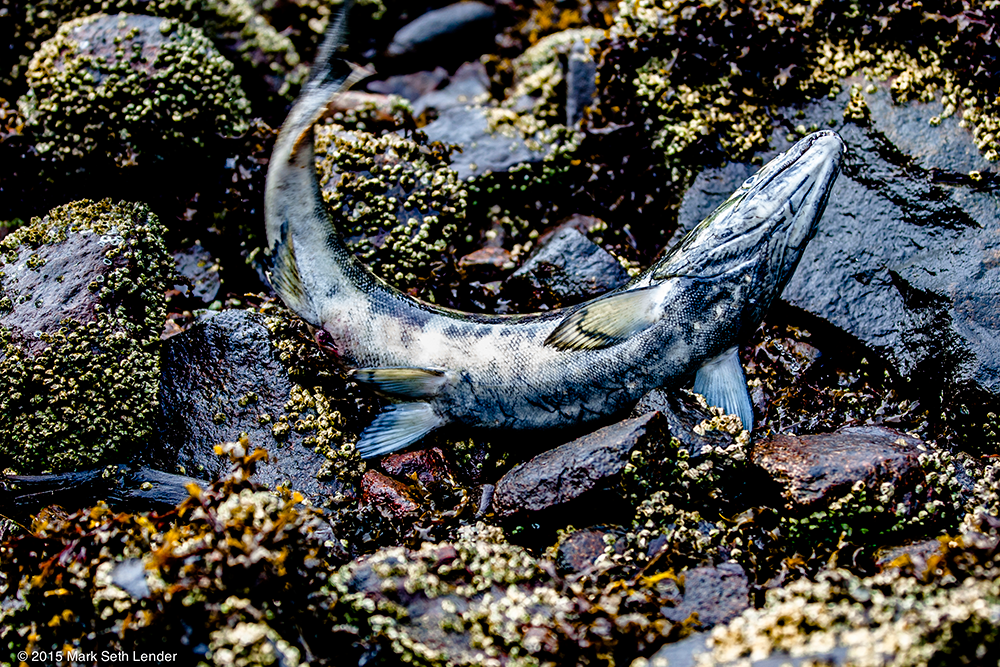 On the rocks at my right hand, a salmon writhes. We tried to launch her again, upstream to meet her Fate. She did not have it in her. When Big Bear sees her there Fate will come to her.

In the morning we kayak around the corner and along the promontory one last time. It rained last night and the river pushes against the flooding tide with a roar. There are tracks all over the flats. Momma Bear, her prints no bigger than the ones I might make walking on my hands. Baby Bear; here’s where he came to a stop feet planted side by side, and Momma Bear right behind him. And there, just ahead, that’s where Big Bear went. And Momma and Baby again, their paws bunched together in a clump which means they turned and left here at a run.

All these traces will wash out on the dark of the new moon tide. And of the stranded salmon? Not so much as a single, iridescent, scale. 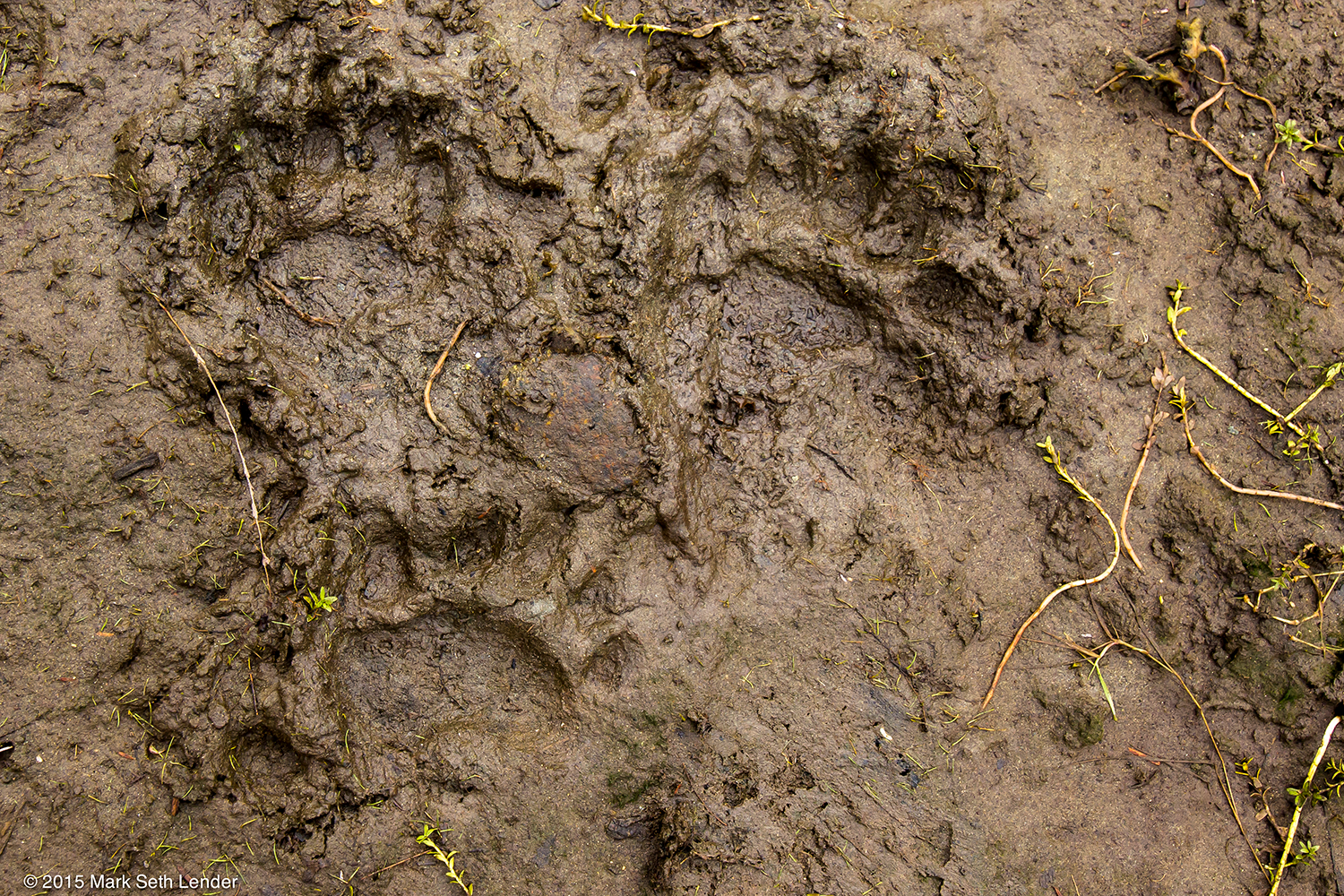