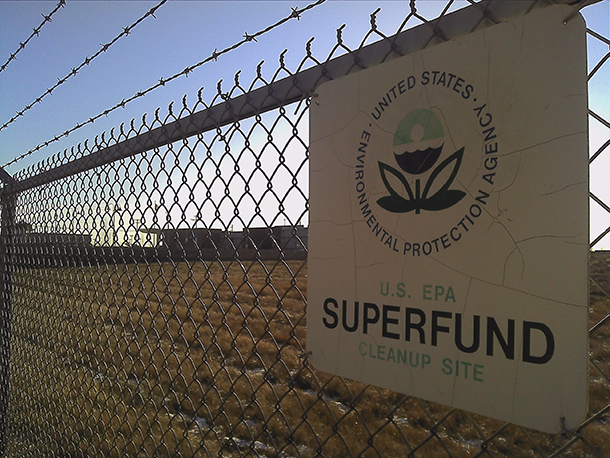 There are many ways to rank a location based on pollution. While the American Lung Association evaluates air quality for ozone and particulate matter, the EPA identifies and prioritizes superfund sites for cleanup. (Photo: markzvo, public domain)

In this week’s trip beyond the headlines, Peter Dykstra tells host Steve Curwood how California takes the top honors on the American Lung Association’s list of “Most Polluted Cities”, but cautions that there’s more than one way to define “polluted.” Also, he explains how American lawns are our biggest “crop”, but far from our greenest, and notes the anniversary of the book “Dumping in Dixie”, authored by the “father of the environmental movement.”

CURWOOD: It's Living on Earth, I'm Steve Curwood. Time to head off to the world beyond the headlines now. Peter Dykstra’s our guide. He’s one of the team at Environmental Health News, that’s EHN.org and DailyClimate.org, and he joins us on the line from Conyers, Georgia. Hi there, Peter.

CURWOOD: Well, that’s a dubious honor.  What happened to the big smokestack cities in the East?

DYKSTRA: Cincinnati, Pittsburgh, and Cleveland took the eight-through ten spots, but Philadelphia got high marks for clean air.  Now, clean, healthy air is important, and the Lung Association is a fine organization, but the two main types of air pollution alone do not a polluted city make, so I’ve got a little issue with calling this a list of “most polluted” cities. In America, pollution has a big, diverse tent:  There’s mine runoff, sewage releases, pesticides, fertilizer runoff, waste dumps, coal ash, oldies-but-goodies like lead and asbestos and uranium tailings – I could go on, but you get the point – let’s not let air pollution take all the oxygen out of the room.  But let me give you one example of why smoggy California’s not all that.

DYKSTRA: California has ninety-seven sites on EPA’s Superfund toxic waste cleanup priority list.  But California’s a big state – the third biggest of the fifty states, so that works out to one Superfund site for every seventeen hundred square miles.  But now, Pennsylvania is a much smaller place, and it has 95 Superfund sites – about one every 500 square miles – quite a few of them in that clean-air capital, Philadelphia.  And my ancestral home of New Jersey?  A Superfund site every 76 square miles.  So what’s “most polluted”? It’s not just what we breathe.

CURWOOD: Hmm, so what’s the cleanest state by Superfund standards?

DYKSTRA: Alaska...six Superfund sites spread over a vast two-thirds of a million square miles. Steve, that place is so clean you could eat a meal off the melting permafrost.

CURWOOD: Well, we don't want to linger too long on the melting permafrost, so what else have you brought us? 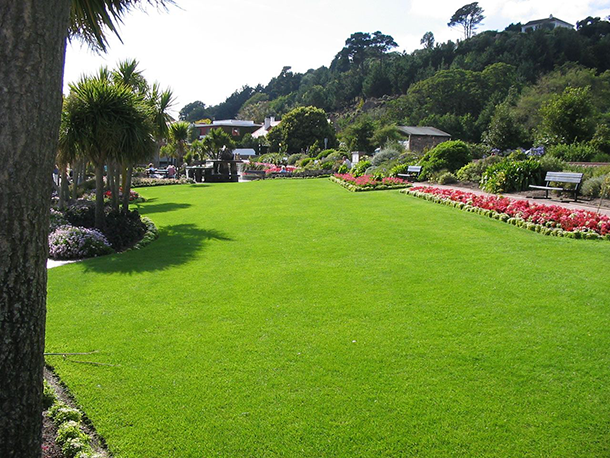 DYKSTRA: If I asked you to guess the one thing that Americans grow that takes up the most acreage, you might say it's corn. But you'd be wrong, and nor is it wheat, or soybeans, or anything else consumed by humans. It’s lawns.  And our sixty-three thousand square miles of lawns is three times the acreage we plant in corn. This according to a new NASA and NOAA study.

CURWOOD: Whoa, that’s a lot of turf, no pun intended. And the resources and money that go into lawn care?

DYKSTRA: Well there’s a noted researcher at Duke, Bill Chameides who pulled together some numbers on this a while back:  30 to 60 percent of residential water use is outside – lawns, gardens, pools, There's $30 billion a year in the lawn care economy, 30,000 tons of synthetic pesticides and three million tons of fertilizers a year used on lawns, 800 million gallons of gasoline used, seventeen million gallons spilled, by lawnmowers and weed whackers.  One final number, going back to the “states” theme:  If those 63,000 square miles of lawn were their own state, they’d be the 21st biggest in America, just smaller than Washington State, just bigger than Florida.

CURWOOD: So sometimes green is … not so green.  Let’s move on to the history calendar now.

DYKSTRA: With all the observations of Katrina’s tenth anniversary, and a renewed focus on how environmental burdens fall on poor and minority communities.  Its time to remember that August 31st is the 25th anniversary of the seminal book on environmental justice, “Dumping in Dixie.”  The author, Bob Bullard, has been called the Father of the Environmental Justice Movement.  His book made a compelling case for addressing the deep injustices in who carries the biggest environmental risks, often in poor factory towns, near waste dumps, or inner city neighborhoods. A quarter of a century later, many environmental activists still say that government, big environmental groups, and the news media are slow to act on, or even understand, the problems. My favorite quote is one from the Reverend Jesse Jackson years ago, who pointed out that you’ll never find a nuclear waste dump in Beverly Hills.

CURWOOD: I don't imagine you'll find a solid waste transfer station there, or a sewage treatment plant for that matter, huh?

CURWOOD: Peter Dykstra, the publisher of Environmental Health News, that's EHN.org, and the DailyClimate.org. Thanks so much for taking the time Peter, we’ll talk to you soon.

DYKSTRA: OK, Steve. Thanks a lot. We'll talk to you soon.

“The American Lawn Is Now The Largest Single 'Crop' In The U.S.”

“Statistically Speaking: Lawns by the Numbers”

More about Dumping in Dixie