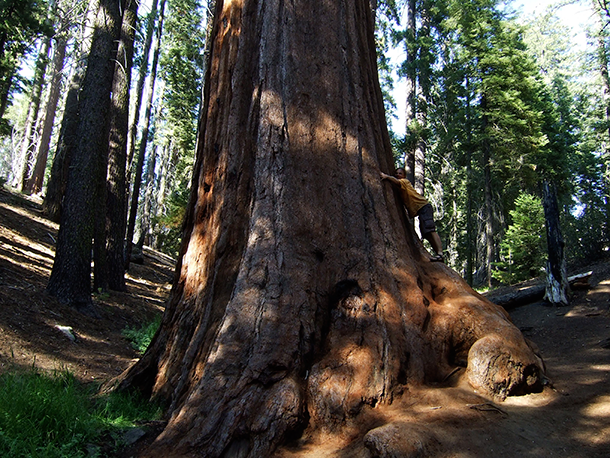 The term “treehugger” gets thrown around a lot, but its history actually dates back to 18th century India. (Photo: Sebastian Werner, Flickr CC by 2.0)

In this week’s trip beyond the headlines, Peter Dykstra tells host Steve Curwood about fossil-fueled FOIA requests, the perfect website to show a climate denier, and the history of the term “treehugger”.

CURWOOD: Time to head off to the world beyond the headlines now. Peter Dykstra is our guide. He’s with Environmental Health News, that’s EHN.org and DailyClimate.org, and joins us on the line from Conyers, Georgia. Hi, there, Peter.

DYKSTRA: Hi, Steve. Let me bring you a couple of items about climate denial: One involves a tenacious journalist, the other one, a science website. Y’know we’ve spoken a lot about how the U.S. coal industry is having the worst of financial times. Last month a coal giant, Alpha Natural Resources, filed for Chapter Eleven bankruptcy, and when you do that, there’s a lot of paperwork. An investigative reporter named Lee Fang, at the online publication The Intercept, dug through that bankruptcy filing and you’ll never guess what he found.

DYKSTRA: In a Chapter Eleven filing, you have to disclose all the people and businesses you have financial ties with, and Alpha was apparently doing business with a fella named Chris Horner. He’s a Washington political operative and attorney and a staunch climate denier who’s gained fame for himself by hounding climate scientists with massive Freedom of Information Act requests and calls for investigations of their research. Another name on Alpha’s financial list is the law firm where Horner is a Senior Attorney. Neither Horner nor Alpha are commenting, and the bankruptcy papers don’t go into detail on how much money changes hands, but many climate scientists are enjoying the revelation of something they’ve long suspected – their serial harasser is at least partially powered by coal.

CURWOOD: Hmm. Fossil-fueled FOIA’s. Let’s move on to that science website you mentioned.

DYKSTRA: So Barack Obama is the first U.S. president to set foot on the soggy permafrost and shaky ice of the Arctic while in office. And we’re at the time of year when the Arctic always gets a little extra attention for climate change anyway. September 15th is the traditional date when ice cover in the Arctic Ocean reaches its lowest levels before the winter-freeze sets in.

CURWOOD: And I guess this year continues the overall trend of declining sea ice.

DYKSTRA: It does. And while some years are not as bad as others, the trend is undeniable. Which of course does not stop some people from denying it, so if your uncle, or your neighbor, or your local member of the House Science Committee says the Arctic’s not melting, take them to the website called Cryosphere Today. It’s run by the Arctic program at the University of Illinois, and they have an image of Arctic ice coverage for every day back to 1979 and they lay them out in before-and-after mode. So if you want to compare the amount of Arctic ice in September 1979 to this September, here you go. Tell ’em how to find that website, Steve Curwood!

CURWOOD: So, you can link to those before and after ice images, or see a recent one, at LOE.org – and by the way that’s where you can find out more about these stories. And, Peter, before you go, let’s get a lesson in environmental history. What have you got? 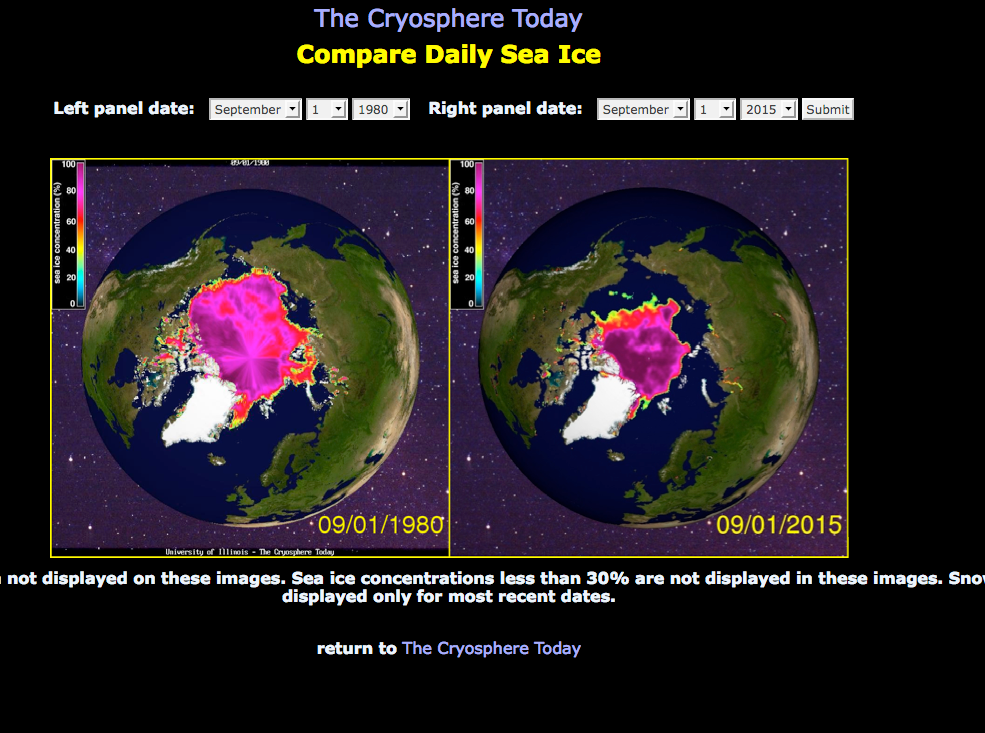 DYKSTRA: Ever wonder how we got the word “treehugger”? It’s one of those names whose meaning varies, depending on who’s using it. If you think there’s too much environmental regulation, it’s an insult. If you work to save forests, it’s high praise, and for most of the rest of the world, “treehugger” is kind of a dismissive stereotype. But September 9, 1730, is the date that historians record the first inter-species hug between humans and trees.

CURWOOD: Tell us more. And keep it clean, please.

DYKSTRA: 285 years ago, in what’s now the Indian state of Rajasthan – which literally means the “Land of Kings,” a sect called the Bishnois were nature worshippers who literally became treehuggers, and it didn’t go well. As the story goes, one of those kings – a rajah – sent soldiers to cut down Khejarli trees to help build a new palace. But the trees were sacred to the Bishnois. Amrita Devi, a Bishnoi woman, stepped forward to stop the soldiers, wrapped her arms around a tree and said they’d have to kill her to get at the tree.

CURWOOD: And they did?

DYKSTRA: I’m afraid so and they didn’t stop there. Amrita’s three daughters stepped forward to save the trees, and it didn’t stop there either. In all, 363 Bishnois gave their lives by hugging trees. So next time you toss around the word “treehugger,” remember that it has deep, noble, and very tragic roots.

CURWOOD: What a price for environmental protection. Peter Dykstra is with Environmental Health news – that’s EHN.org, and the DailyClimate.org. Talk to you next time, thanks.

DYKSTRA: All right, Steve, talk to you soon.

More about the history of “treehuggers”