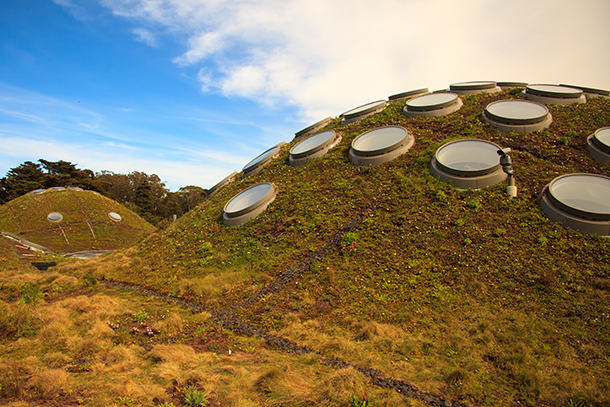 The green roof at the California Academy of Sciences in San Francisco covers 87% of the Academy’s rooftop. (Photo: opacity, Flickr CC BY-NC-ND 2.0)

In this week’s trip beyond the headlines, Peter Dykstra and host Steve Curwood discuss the redesign that includes a green roof, meant to save a dying mall, American conservatives’ domination of climate denial, and one Reverend’s conviction that he “prayed away” a hurricane.

CURWOOD: And now let’s check out what’s going on beyond the headlines. Peter Dykstra of the DailyClimate dot org and Environmental Health News, that’s ehn dot org has been scoping that out, and he’s on the line from Conyers, Georgia. Hi Peter!

DYKSTRA: Hi Steve. You know, one of my all-time favorite books from about twenty years ago is called The Geography of Nowhere by Jim Kunstler. It’s an angry, snarky assault on the suburbs, particularly how shopping malls have helped erase main streets and small businesses, and the idea of a public square in so many places. But there’s something cooking in a Silicon Valley town that could reverse that decades-old trend—a failing shopping mall could become the heart of a new town center, all topped off by the world’s largest green roof.

CURWOOD: Well we’ll hear you out on this one, but it all sounds, well, a little too good to be true, Peter.

DYKSTRA: Fair enough, and it’s not true yet, it’s just an idea as reported by the folks at Fast Company. But the Vallco Mall in Cupertino, California has an ambitious plan, and if it’s approved, the owners are committing three billion dollars to turning their half-empty food court and rows of vacant stores back into a vibrant downtown.

CURWOOD: Cupertino is the headquarters for Apple, so there’s got to be a bit of money in that town, right?

DYKSTRA: And one might assume that the folks in Apple’s hometown have a bias to online shopping rather than mall trips, so that maybe explains the failing mall. The Vallco Mall hopes to transform its space with community gardens, farmers’ markets, main street style stores, trails, bike and hiking paths, and a thirty-acre park in place of a mostly-empty parking lot. Let’s wish them luck with a groundbreaking idea. 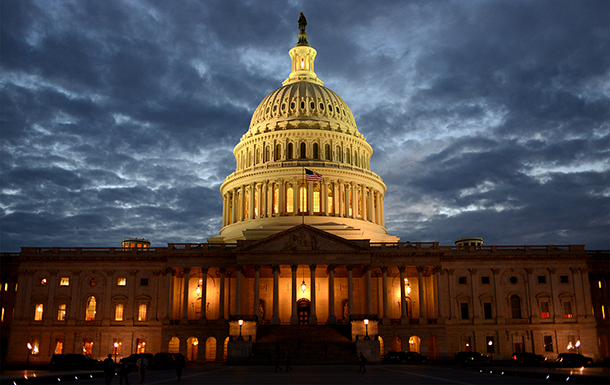 CURWOOD: Indeed we should, hey what else do you have today?

DYKSTRA: From the exciting world of social science research—you know, actually this is a little exciting; it’s a lot interesting, and absolutely relevant to the world’s climate politics. Research in the journal Politics and Policy surveyed the major conservative political parties in the U.S., Canada, Australia, New Zealand and five European nations and guess what? American Republicans don’t have an outright monopoly on climate denial, but the phenomenon is far more universal among U.S. conservatives than in their counterparts in the eight other countries surveyed.

CURWOOD: So in these other eight countries, they’ve gotten at least a little bit beyond arguing about whether climate change is a hoax, huh?

DYKSTRA: And only Australian Conservatives oppose measures to regulate carbon. Still, in those eight countries, the dominant Conservative Parties acknowledge that climate change is a problem in need of a solution. In keeping with Conservative philosophy, the solutions are generally market-based, and there’s no blanket rejection of renewable energy. But meanwhile here in the U.S., we had a pitched battle in Congress to turn back the menace of energy-efficient light bulbs. With the crucial climate talks approaching in Paris in December, I found this to be some really good insight.

CURWOOD: Time to drag another gem out of the history vault, Peter. What do you have for us this week?

DYKSTRA: Well, some of us might be feeling a little Poped-out at this point, so here’s another charismatic contemporary religious figure with strong views on human influence on the environment. On September 26th and 27th of 1985, thirty years ago, we witnessed one of the greatest miracles since Noah and the Ark. Hurricane Gloria was bearing down on the East Coast, with Virginia Beach in the bulls eye. The night before, the most famous resident of Virginia Beach took to the airwaves in the face of clear and present danger. That’s right, the Reverend Pat Robertson prayed to rebuke Gloria, and wouldn’t ya know it, Gloria made an abrupt sharp right turn and spared Virginia Beach.

CURWOOD: So at this point Pat Robertson is taking credit, and is there a happy ending?

DYKSTRA: Well, for Virginia Beach and Pat Robertson’s headquarters, maybe. But that sharp right turn took the storm into Long Island and southern New England. Cape Hatteras got a big storm surge; Virginia Beach got doused with rain. Eight people lost their lives in the Northeast after Gloria turned northward for a direct hit.

DYKSTRA: He did, and on his TV show, the 700 Club the next night – the video’s on our website at loe dot org – he actually said that the people of Long Island and New England may not have been praying hard enough. Give the Reverend credit, though, Virginia Beach has a pretty good record of being spared from direct hurricane hits. Pat Robertson says he prayed one away in 1964 and again in 1995.

DYKSTRA: All right Steve, thanks a lot, we’ll talk to you soon.

CURWOOD: And as well as the Pat Robertson video, there’s more on these stories at our website, LOE dot org.


The Geography of Nowhere: The Rise and Decline of America’s Man-Made Landscape

On Climate Change, the GOP Is an Outlier

Pat Robertson explains how he “prayed away” Hurricane Gloria

The aftermath of Hurricane Gloria