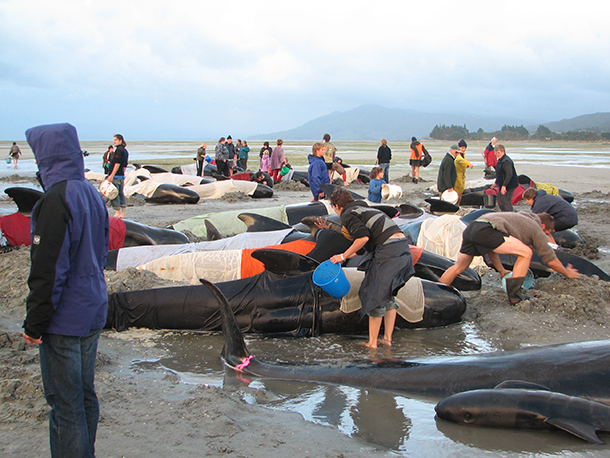 CURWOOD: The history of whales and humans has not been happy – at least for whales. We hunted some species nearly to extinction, and several countries don’t observe the current hunting ban. Plenty of whales are also maimed or killed by huge cargo ships that plough into them, fishing nets and lines that entangle them and incessant ocean noise that deafens them. Well, now there’s a modest victory for whales off southern California and Hawai’i. In response to a lawsuit brought by the Natural Resources Defense Council, the navy will restrict its use of damaging sonar in key whale habitat. Zak Smith is a senior attorney with NRDC – welcome to Living on Earth, Zak!

CURWOOD: What exactly did the Navy agree to do here?

SMITH: Well, the Navy agreed to do several things, most importantly they agreed to set aside certain areas within their range where they conduct training and testing activities and set aside those areas where they won't use particular types of technologies that are dangerous for marine mammals such as sonar and use of explosives. We identified those areas in Hawaii and Southern California that are important to marine mammals and many of those were set aside where they’ll no longer conduct those kind of activities. We also got an agreement that should help reduce the incidence of ship strikes, which are problematic for blue whales and other great whales that migrate along California's coast.

CURWOOD: How did this all come about?

SMITH: Well, it's a long story and I'll give you the short version.

SMITH: In 2000, there was a mass stranding of beaked whales and other species in the Bahamas and very quickly some scientists started to link it to the Navy's use of sonar in that area. And a report over time was conducted by the Navy and the National Marine Fisheries Service, which concluded that sonar was in fact the cause of those strandings and deaths of those marine mammals. And kind of since that time, literature has developed, scientific research has been conducted, and NRDC has had several lawsuits in which we have challenged the adequacy of the Navy and the fisheries services analysis of impacts.

So that story kind of continued until close to two years ago, year and a half ago, we sued over the Navy's five-year plan to conduct training and testing activities in Southern California and Hawaii where their own models estimated more than 9.5 million incidences of harmed mammals over five years, hundreds of deaths they asked for authorization for. So, we sued and said that they hadn't done adequate analysis, that they had not prepared adequate measures to protect marine mammals, and we won in court on all claims under the Endangered Species Act, the Marine Mammal Protection Act. And then the question was: Well, how do we then remedy their violations of law? And that's the settlement that we just reached. 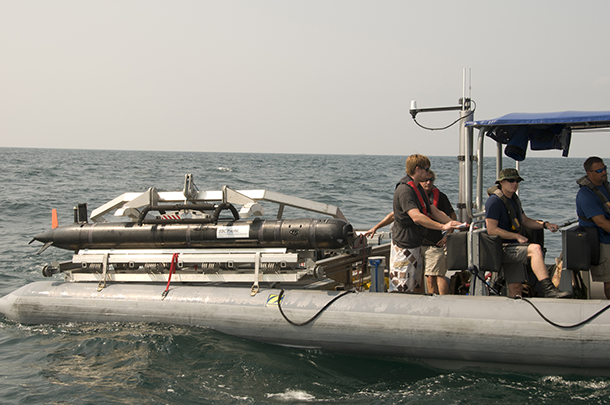 The MK18 sonar is prepared for launch off a rigid-hulled inflatable boat during during the 2011 Mine Countermeasures Science and Technology Demonstration of the Office of Naval Research. The demonstration, hosted by Naval Surface Warfare Center, Panama City Division, is a two-week, in water demonstration testing the latest mine countermeasures mission naval capability technologies. Thirteen projects are participating in the event from June 13-24 off the coast of Panama City Beach, Fla. (U.S. Navy photo by Craig McDonnell/Released)

CURWOOD: How a big deal is this from the perspective of cetacean conservation?

SMITH: This is very important. I mean, it's a huge victory for conservation for marine mammals because what it does is for the first time says, “How can we achieve those national security goals and the training goals that we have while at the same time maximizing protection for marine mammals?” And so, that's for the first time you see that the Navy and the fisheries service sitting down, looking at the biologically important areas that have been identified for different species throughout the ranges and trying to determine whether or not they could set aside those areas or take other steps to limit harm in those areas. And that's something that the Navy had been resisting doing for years and so in that sense it's incredibly significant and it’s a model that should be used for the Navy going forward and could be applicable to other agencies as they plan activities along our coasts.

CURWOOD: By the way, how does sonar impact whales and dolphins?

SMITH: Sonar has a range of impacts that it can have on marine mammals. On one end of the scale, you have outright death. If you're close enough to a sonar source with the kind of high-intensity sound that is emitted from those sources, it can lead to internal organ damage. There are indications of bleeding from the ears and the eyes, so there's those kinds of impacts at the very closest range, the most horrible ones. As you move away from the source and the less severe types of injuries would be permanent hearing loss, temporary hearing loss, which are still incredibly significant for marine mammals. They depend upon hearing for all of their interactions in the environment. The ocean is a very dark place after you get down deep enough where they spend most of their time and many scientists including the great Sylvia Earle have said that a deaf whale is a dead whale, and so even estimates of temporary hearing loss are very concerning. And then it kind of peters out, but it's still incredibly significant behavioral disruptions which are habitat abandonment, interrupting feeding opportunities and over time, those kinds of things subjected to populations day in and day out in these areas can really have an impact on the way in which populations can survive. 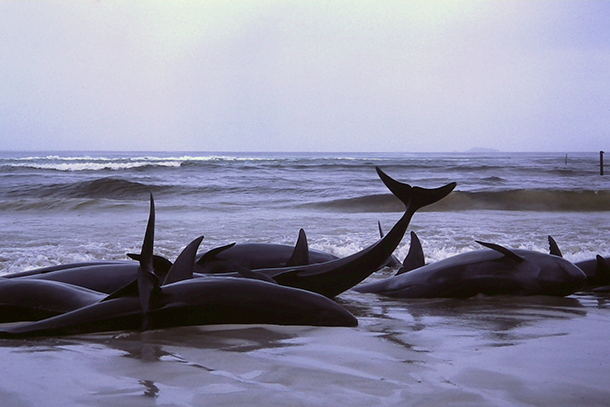 Under the Navy’s five-year plan, they were permitted to harm whales, dolphins, seal and sealions and other cetaceans. The Navy estimated that during that time, its activities would harm those animals 9.6 million times—including instances of temporary or permanent hearing loss, disruption to their behaviors, hemorrhaging, and death. (Photo: Bahnfrend, CC BY-SA 3.0)

CURWOOD: What more does the Navy need to do now?

SMITH: Well, this is a great opportunity. The kind of collaborative effort that we were able to achieve through this settlement is hopefully something we can take to the other ranges where the Navy conducts its activities along the Atlantic coast, in the Gulf of Mexico, where there are even a larger number of impacts to the marine mammals that live within those areas, Pacific Northwest, Gulf of Alaska, the Mariana Islands. There's a lot of areas where our Navy operates and where this kind of approach, which is very common sense, should be the next step.

CURWOOD: By the way, Zak, who else is operating in the ocean making a lot of noise that could be of concern to cetaceans?

SMITH: Well, there's three categories of ocean noise contributors, which are the biggest categories: Navy, some from war games that we've discussed, as well as a shipping noise which is an incredible burden that is placed on the marine environment. They've done a lot of studies about that showing this kind of background noise getting so intense that whales and another marine mammals—it's like being at a rock concert, you have to scream at each other to be heard—so shipping noise is a huge issue and then even more damaging kind of immediately, if you're there, is oil and gas development and that is mostly through the mechanism of seismic exploration. They introduce incredibly loud sounds into ocean and basins and that is a huge problem, especially when you're opening up new areas for naive populations like the Atlantic coast that have been off-limits to oil and gas development for decades as well as the Arctic. So you start to introduce those kinds of things and there have been incidences of stranding events associated with oil and gas exploration around the world. That's another concern and something that we're fighting on.

CURWOOD: Zak Smith is a staff attorney at the Natural Resources Defense Council. Thanks for taking the time today, Zak.

SMITH: Thank you it was my pleasure, and thank you for covering this issue.


Navy Agrees to Limit Underwater Assaults on Whales and Dolphins

More about the lawsuit and how naval activity harms cetaceans