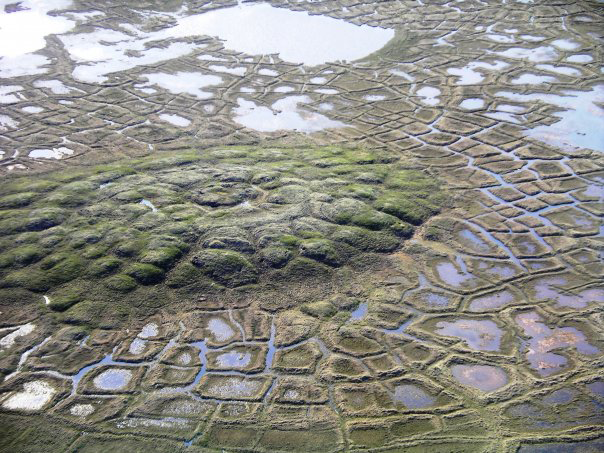 In this week’s trip beyond the headlines, Peter Dykstra tells host Steve Curwood how the withdrawal of Big Oil from the arctic has a small Canadian village torn between its traditions and income, and how language on climate change is hotly disputed just as often as the issue itself. And we mark the 45th anniversary of Nixon’s creation of the National Oceanic and Atmospheric Administration and the Environmental Protection Agency.

CURWOOD: Now let’s visit the land down yonder beyond the headlines.
Peter Dykstra is on the line from Conyers, Georgia. He’s with EHN dot org, that’s Environmental Health News, and the DailyClimate dot org and has dug out some interesting nuggets to share. Hi there, Peter!

DYKSTRA: Hi Steve. Let’s start with a couple more observations on Arctic oil drilling. First, the retreat by Big Oil, not just in the Alaskan Arctic, but also in the Beaufort Sea off Canada, has a sort of a sad historic ring to it. Over a century ago, white Europeans and North Americans brought commercial whaling to the Arctic, with all sorts of implications for native culture, most of it not so good. Today, the potential for wealth and jobs, and the potential for disruption of both native traditions and the environment have Arctic communities split.

CURWOOD: And with both commercial whaling and oil drilling, an abrupt departure when the money picture changes.

DYKSTRA: Correct, and here’s another impact: A few hundred miles east of Shell’s proposed drillsite, the Beaufort Sea village of Tuktoyaktuk – everyone calls it “Tuk” for short – is far along on a massive building project – a permanent road to replace the seasonal ice road that connects Tuk to the rest of Canada. The village has tied its hopes to becoming an Arctic seaport, servicing the oil industry and merchant ships traveling through the melting Arctic Ocean. But even before Shell made its announcement, Exxon, BP, Imperial Oil, Chevron, and Statoil all announced that their Canadian drilling plans were on hold for at least five years, if not permanently. But the setback for Tuk’s economy may be a lifeline for its native traditions.

CURWOOD: I suspect, though, it won’t heal the divisions in those native communities. What’s next?

DYKSTRA: I want to get in what I really hope is the last word on this media controversy over the use of the term “climate denier.” The Associated Press recently recommended dropping the use of the term “denier” in favor of “climate doubter,” or the mouthful of “one who rejects mainstream science on climate change.”

CURWOOD: Well, Peter, there are some people who “doubt” the evidence on climate change to be sure, but there are also people who say it’s all a hoax, right?

DYKSTRA: Yeah, and particularly for that group, here’s why I think the A.P. is wrong. Sigmund Freud and his wife Anna first brought the concept of denial into widespread use a century ago. To the Freuds, denial is a defense mechanism, and the accounts I read all describe it as a process of explaining problems away - like saying “The climate is always changing” or blaming others for problems (I’m looking at you, sunspots). Another marker of denial is not perceiving things that are obvious to others, like melting icecaps and acidifying oceans. And a third is rationalizing your own denial—saying things like “climate scientists are only in it for the money”, or that a snowstorm in one part of the world destroys decades of evidence of a warming planet. AP reporters like Seth Borenstein and Karl Ritter do world-class reporting on science and climate change, but on dropping an accurate word for squishier ones, the AP’s doing a disservice.

CURWOOD: Well, the quality and impact of AP reporting on climate change is something nobody can… Deny. Any last words on this? 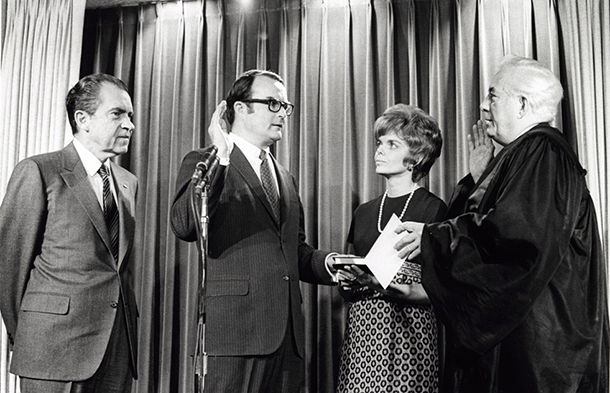 CURWOOD: OK, I probably should have seen that one coming. Alright Peter, let’s take our weekly journey into the world of environmental history. What have you got for us?

DYKSTRA: Long ago, in a faraway land, with two strokes of his pen, a President created two agencies that many members of his own party today want to abolish. Forty five years ago this week, on the second of October, 1970, Republican Richard Nixon authorized the creation of the Environmental Protection Agency, and on the third day, he created NOAA, the National Oceanic and Atmospheric Administration. The two agencies pulled together all sorts of science and environment functions that had been spread throughout the federal bureaucracy.

CURWOOD: But that hasn’t stopped a lot of people from complaining that EPA and NOAA have become bureaucracies unto themselves.

DYKSTRA: Well, sure, and with the possible exception of the IRS, there’s no government agency that makes more people mad every day than the EPA. Many in industry view EPA as an agent of tyranny, what with all this clean-air, clean-water talk. And environmentalists can get just as mad at EPA when things don’t get cleaned up – maybe like those thousand-plus Superfund sites still on the waiting list. And NOAA? If you want to see people get mad at NOAA, just go to a fishing town in the Gulf of Mexico or New England.

DYKSTRA: All too often it is. But think of where we’d be without NOAA – world-class research on oceans and climate change, and the one government product that virtually every one of us uses every day – the weather forecast. And without EPA, for all its flaws, like that little mine-waste accident this summer – we’d all just be driving around in our clean-burning Volkswagens, taking in the dubious substances dropped into our air and water. So thanks, bureaucrats, and happy 45th birthday to all of you.

DYKSTRA: Alright Steve – thanks, we’ll talk to you soon.

Denial as a defense mechanism

EPA celebrates an anniversary too