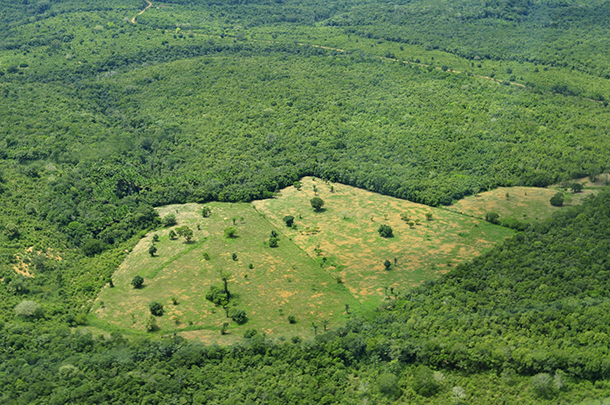 Approximately 17% of the Amazon rainforest has been lost in the last fifty years. (Photo: CIAT, Flickr CC BY-SA 2.0)

The Ka’apor tribe of Maranhao, Brazil depends on the Amazon rainforest for its livelihood, but illegal logging threatens to raze what little forest remains. Guardian correspondent Jonathan Watts tells host Steve Curwood about the situation and how the tribe is using both traditional and high-tech methods to defend its trees.

CURWOOD: A crucial part of the plan Brazil has announced to cap and reduce greenhouse gas emissions depends on halting illegal logging in the Amazon.
Illegal logging is highly lucrative, and despite steep penalties, authorities haven't been able to stop it altogether. In the Brazilian state of Maranhao, though, a local tribe is taking the protection of the forest into its own hands, and four of its leaders have been killed in the struggle. Jonathan Watts, Latin America correspondent for the Guardian, has been describing just how these indigenous people are defending their trees. Jon, welcome to Living on Earth!

WATTS: Hi Steve, good to be on the show!

CURWOOD: First of all, where is Maranhao?

WATTS: Maranhao is in the far North of Brazil. It’s the poorest state in the country, and it was, until about 40 or 50 years ago, quite a heavily forested area. But in recent decades it's been largely cleared for cropland and for grazing pastures. 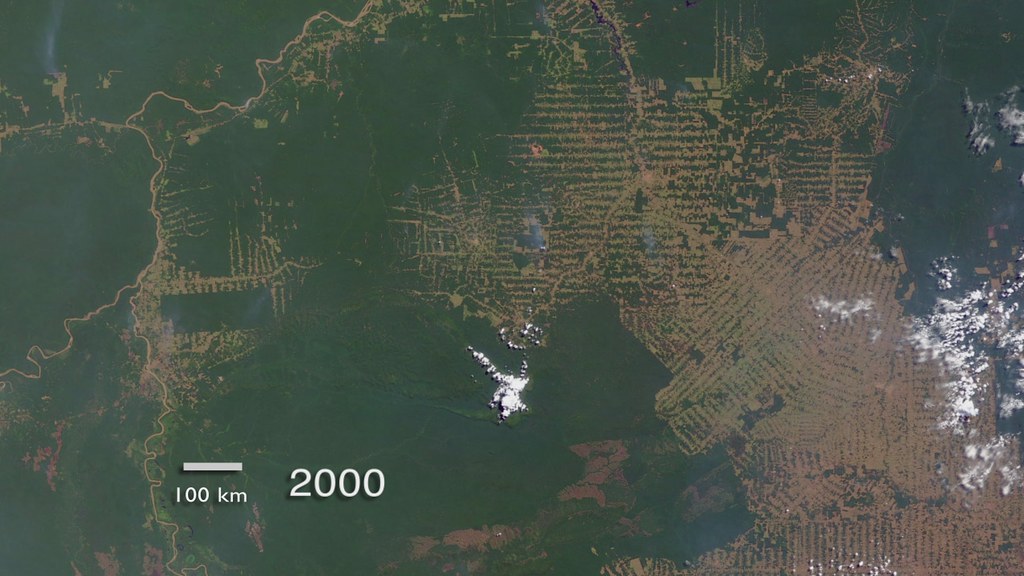 CURWOOD: How legal is that, and what does that mean for the people who live there?

WATTS: All of the logging that now takes place is being done illegally. It greatly affects the livelihoods of the people in the forests, because the last remaining areas of forest are all in indigenous territory. It's the territory of the Ka’apor people. They are a tribe that has been there for many generations, and they say that when the trees are cut down they lose their livelihoods, because the trees are the source of many of the fruits that they eat, it’s where the birds they get their head-dresses from live, and it’s part of an ecosystem that they have grown used to living in for as long as anyone can remember.

CURWOOD: Now, Jon, what happens what an illegal logging crew shows up in the forest that the Ka’apor tribe is guarding?

WATTS: What happens when the Ka’apor find illegal loggers is that they deal with them very aggressively. They round up as many of their people as they can, they head out having painted their skin in basically war paint, they arm themselves with bows and arrows and heavy clubs, and then they surround the logging trucks. They force the loggers to come out, they disarm them if they have weapons, and then they warn them not to come into their forest. And if they find people that they have caught before, and warned before, they will strip them, beat them and they will drive them away. And in every case they burn the loggers’ trucks and tractors. So you see a very aggressive response to illegal logging.

CURWOOD: How does a bow and arrow take on, you know, an automatic weapon?

WATTS: Well, essentially it can’t. What the Ka’apor depend on is the fact that they tend to outnumber the loggers; and mostly the loggers — the people who actually do the logging — it’s not worth their while getting into a dangerous confrontation, and so they give up their arms. On the other hand, the big business people behind the illegal logging operations, they don't want to be kept out of the forest. The Ka’apor, as far as we know, have never killed anybody, they have broken some bones, but the loggers do appear to have responded with lethal force. That they have been hiring assassins to kill the Ka’apor tribe’s leaders, though it has to be said we don't know that for sure, because none of these killings have been investigated to the point where anyone is being prosecuted. 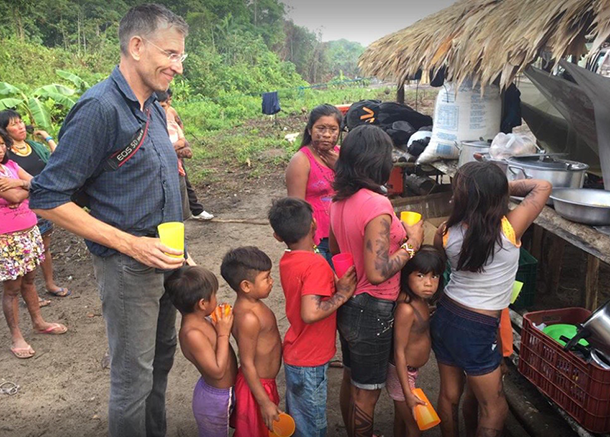 Watts queues up for breakfast with the local Ka’apor villagers. (Photo: courtesy of Jonathan Watts)

CURWOOD: So how does this tribe, the Ka’apor, in what ways do they use technology to protect their forest?

WATTS: The Ka’apor are at once a very traditional tribe, as I said; they use bows and arrows, they have face paint, they use head-dresses made from bird feathers, it looks like something out of a very old film when you are there, and yet at the same time they are very modern. They have had contact with the outside world for many generations. Many of their members can speak Portuguese, many of them can drive, some have motorbikes, and some can use computers. And they are now, with the help of Greenpeace, using even more advanced technology in their battle against the illegal loggers. As of last month, they took hold of more than 10 GPS tracking devices, and they tried to put those onto the logging trucks and trace where they’re going, so that they can get evidence to actually prosecute the people behind the loggers on the ground. They have also taken hold of a dozen camera traps -- they’re usually used for capturing images of rare wildlife, but in this case they are being set on the logging trails in and out of their forest, with the idea that they can catch one of the lorries going in empty and leaving with a full load of logs.

CURWOOD: And what about the local authorities; what are they doing to try to stop this illegal logging?

WATTS: Well, the Brazilian authorities - they have a mixed record when it comes to dealing with illegal logging. At a national level they're doing a lot of the right things. In recent years the government has allowed the establishment of wider indigenous territories, higher penalties are being imposed on illegal loggers, and a part of the environment agency called IBAMA has been working with the space agency to use sophisticated satellite imaging to find out which areas are being cleared and then to send armed rangers in helicopters or jeeps to try to catch people in the act and then prosecute them. And as a result of this, deforestation in Brazil has slowed quite dramatically in the last 10 years, but at the same time illegal logging continues and is often not seen by satellite devices. And it's also corrupt officials in government agencies that provide counterfeit documents that make it look like the illegally felled logs have actually being properly cleared and have the full authorization.

CURWOOD: What steps are being taken to stop this corruption, if any?

WATTS: The measures that are being taken against it are to increase penalties against those involved and in theory investigations by the police. This, however, has had mixed success. The problem is that the Amazon is so huge and so sparsely populated that in many cases in environment officials and federal police are trying to cover an area the size of a small country with just one of two men, and if they come up against large logging gangs or powerful businessmen they are just outnumbered and often outgunned. And so, more often than not, environmental criminals get away with this sort of thing, and it's estimated that something like 80% of the wood comes from Brazil is from illegal sources. However, two of the most promising developments of recent times are, one, that groups like the Ka’apor, indigenous groups, are being more assertive in defending their territory. And two, you’re seeing some really good action by the prosecutors in Brazil, who have a lot of independence and a lot of power, and they are swooping on local officials and exposing them in secret raids that are prepared in other places long in advance.

CURWOOD: Tell me about some of the rules that the tribe has put in place to try to prevent outside influences from affecting its membership and indeed its culture. 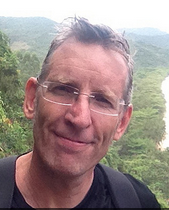 WATTS: Logging’s not the only threat that is faced by the tribe. They see their identity, their culture being threatened by the steady encroachment on their territory and way of life of the outside world. So they have tried to resist this. They have insisted on having their own representative in the local government body that looks after indigenous people. When their children are taught in schools they are only taught in the Ka’apor language until the age of 10. That means that they have a very solid base in the local language; they have introduced or rather formalized their own calendar because they said the Gregorian calendar imposes seasons on them that make no sense for the way that they do that their planting and do their hunting and do their mating. And then the last way in which they’ve tried to resist the temptations of the outside world is to prohibit all alcohol inside the tribe. And what the Ka’apor say is, “well, we know the modern world, we know what modern technology is, we can use it, but we want to choose when we use it and that's how we maintain our sense of who we are”.

CURWOOD: Jonathan Watts is the Guardian’s Latin American correspondent, thanks so much for taking the time today Jon.

WATTS: It was a great pleasure. Thanks again.


The Amazon tribe protecting the forest with bows, arrows, GPS and camera traps

Why are Brazil’s environmentalists being murdered?

photoessay: “War in the Garden of Eden”