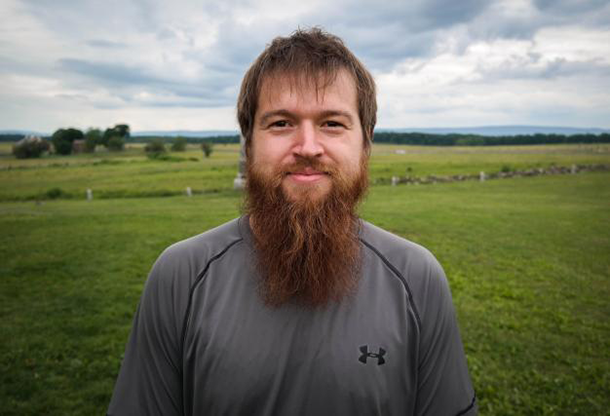 Kyle Beger, 28, of St. Joseph, Missouri, visits "The Angle" at the Gettysburg battlefield, June 17, 2015. The site marks the place where Confederate soldiers briefly broke the Union line during Pickett's Charge on the third day of the battle. (Photo: Lou Blouin)

Each year, thousands of visitors travel to Gettysburg, Pennsylvania to walk the battlefield and imagine witnessing Pickett’s charge and the bloodiest clash of the Civil War. But the landscape has changed dramatically since 1863 and picturing the fight isn’t easy. Now, as The Allegheny Front’s Lou Blouin reports, the park service is using modern conservation tactics to take Gettysburg’s landscape back in time.

CURWOOD: One of the most visited sites of the Civil War is Gettysburg, Pennsylvania, the scene of the bloodiest battle of that conflict. Visitors want to stand in the battlefield's most storied places, like Little Round Top or Devil's Den, and imagine the heroism and suffering that those landscapes witnessed. Until recently, though, it would have been hard to actually picture the scene at Gettysburg because of how dramatically the landscape has changed in the decades after the battle. But things have changed again, as the Allegheny Front's Lou Blouin reports.

BLOUIN: Even more than 150 years after the battle, there's still plenty at Gettysburg that kind of makes you feel like you're stepping back in time. You can even do a battlefield tour in a horse-drawn carriage.

BLOUIN: Katie Lawhon prefers to walk the battlefield. She’s been a park ranger here for more than 20 years. And you can still hear the excitement in her voice hikes some of the most legendary places on the battlefield.

LAWHON: So we’re at Devil’s Den, and this is important ground because we have heavy fighting on the second day of the battle. General Hood attacked nearly a mile of open ground, uphill, against this position, and they took it. 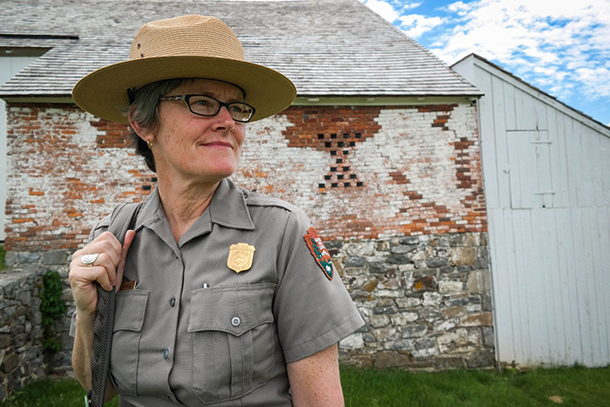 Park ranger Katie Lawhon stands near the Trostle Farm, Gettysburg National Military Park, June 17, 2015. The barn dates back to the time of the battle and is a favorite with tourists because of the cannonball hole left in the brick wall during the second day of the battle. (Photo: Lou Blouin)

BLOUIN: Devil's Den was one of the more dramatic landscapes at Gettysburg in July 1863. It was a sloped, open field, strewn with giant boulders. Soldiers would have used these rocks for temporary cover as they made their attacks. But by the 1990s, the whole area had grown up into a wall of trees. Lawhon says park rangers had to use historic photos to show tourists what it used to look like.

LAWHON: And a lot of people who studied the battlefield, they just walked down into those trees. They tried to walk in the footsteps of the soldiers. And they would do it, it was just a lot harder to understand.

BLOUIN: So in the late 1990s, the National Park Service started toying with a pretty radical idea: what if they rehabilitated the natural landscape at Gettysburg to look like it did in 1863? In places of heavy fighting like the Peach Orchard, they’d replant peach trees. And the meadows that had grown into forest since the battle?  Well, those trees would get the axe. And the Park Service did it. Over the course of about 15 years.

LAWHON: We’re very careful about what we do. And we base it on historic evidence and studies. But at the same time, I mean, our job is to preserve and maintain these battlefield features. We can’t be so in awe of the Gettysburg battlefield that we keep our hands off of it.

BLOUIN: In all, the Park Service rehabbed more than 500 acres of the battlefield's most significant spots. They also removed manmade structures, including a motel, a 9-hole golf course, and even their own visitor center, which the Park Service plopped down in the 1960s at a key point on the Union line. Most of the heavy work is done now, but maintaining the battlefield's new look might prove to be an even bigger challenge. Head landscaper Randy Hill walks up a rocky hillside called Little Round Top. For historical accuracy, he actually has to maintain a clear-cut that was done here just before the battle.

HILL: For the area of Little Round Top, if you were a single person working with a single handsaw, it would probably take you a whole entire summer to keep this area maintained and clear. And then the next spring, you’d have volunteer woody vegetation popping right back up and you’d be right back at it again. 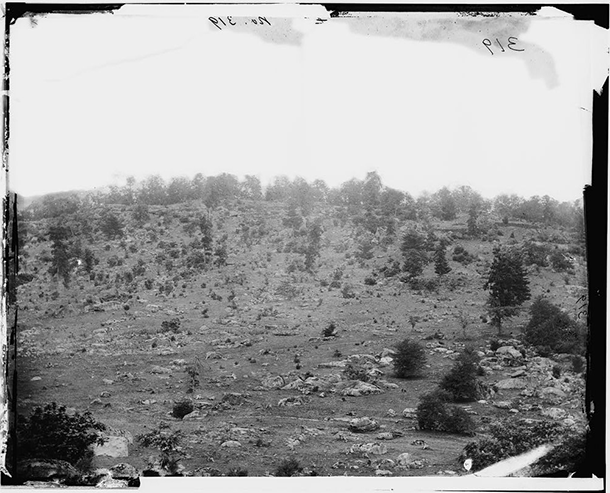 Little Round Top was the scene of intense fighting during the second day of the battle. For historical accuracy, the Park Service maintains a clear-cut that was done here just before the battle. (Photo: Library of Congress)

BLOUIN: Some natural details on the battlefield are more authentic than others. The historic cluster of trees that was the focal point for Pickett’s Charge actually doesn’t have any 1863 trees left in it. Randy Hill just trims the trees that are here now to the right shape and size. But one set of details the Park Service wants to make sure they get right, is minimizing the environmental impact of the battlefield rehab. Zack Bolitho manages natural resources at Gettysburg.

BOLITHO: We knew that we wanted to remove up to 500 acres of wooded habitat. And we said, well, we’ll never do it in any one portion of the park all at once. So the thought process is that things will have the opportunity to adapt as we change the landscape.

BLOUIN: Bolitho says in places like Devil’s Den, they decided to leave some non-historic trees when they found out they were home to a pair of nesting black vultures. And they mow fields as little as possible—and then, only after Gettysburg’s birds are finished nesting. The Park Service has even started using fire to mimic the way nature would regenerate all the open meadows that are again a part of the Gettysburg landscape.

BOLITHO: The Slyder field was our first 13-acre test burn. And it was a pretty good success—success being that it was the first time we did it. And people accepted the fact that Gettysburg could burn and not burn down a cultural resource. 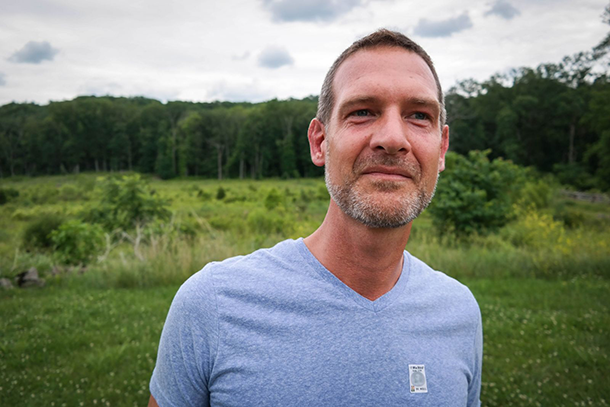 BLOUIN: All in all in, the Park Service has done a pretty good job managing the environmental impacts,  according to Randy Wilson, a professor of environmental science at Gettysburg College and an expert on public lands management. Wilson says it’s also important to remember that Gettysburg is a national military park, whose primary mission is protecting the historical values of the battlefield.

WILSON: So their efforts to try to intervene and say, look, there can also be a place where we can protect the environment, you know, I think that’s a very important step that they’ve taken.

BLOUIN: Wilson says evaluating whether the ongoing rehab at Gettysburg is a good thing for visitors, and all the species that call Gettysburg home, will take some time. He points out that visitation numbers at National Parks are down across the board, so it’s unclear whether the battlefield rehab will make Gettysburg more of a destination. But 28-year-old Kyle Beger, who’s here on a road trip from Missouri, says the fact that you can almost look back in time now at Gettysburg makes all the difference.

BEGER: The feeling you get here is just surreal. You know, we were just thinking earlier, it’s like, imagine all the cannon fire, what it was like to be here. It’s hard to explain, but it’s just incredible. I’m Lou Blouin in Gettysburg.


Gettysburg Battlefield Gets an Extreme Makeover, reports The Allegheny Front