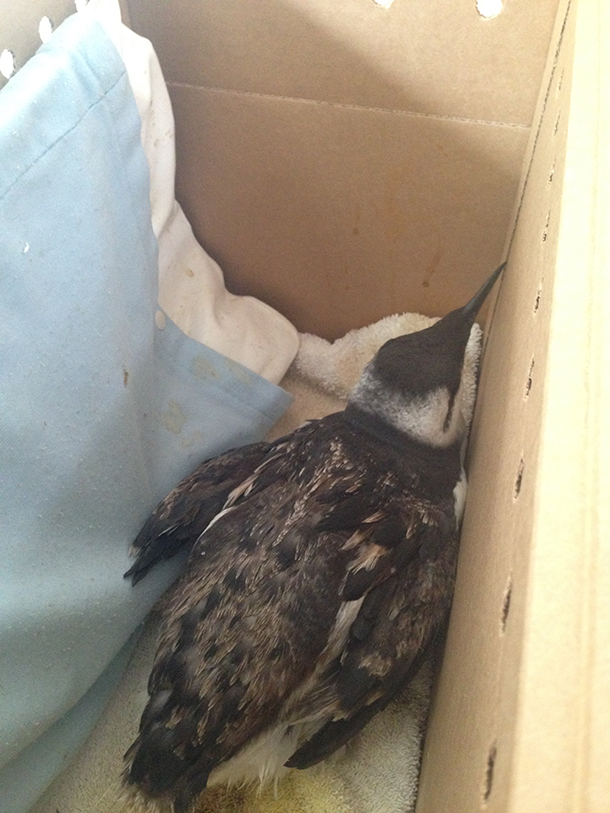 Since the beginning of August, a seabird called the common murre has been washing up in droves on beaches from Southern California to Alaska. Living on Earth’s Emmett FitzGerald reports on the efforts in California to save the birds, and the latest scientific theories about what’s going on.

CURWOOD: The worldwide bleaching of coral isn’t the only unusual ocean phenomenon that’s making waves this fall. Off the coast of California, a small sea bird is challenging wildlife rescue experts, as Living on Earth’s Emmett Fitzgerald has been finding out.

FITZGERALD: Unless you’re a sailor or you work on an oilrig, you’ve probably never seen a common murre. Usually these seabirds live nearly their entire lives at sea, but this summer starving murres been washing up on the Pacific Coast from Southern California to Alaska. Just about every day since the beginning of August, Eve Egan has gotten a call from a confused beachgoer saying:

EGAN: “I know this is going to sound crazy but I see a penguin on the beach”. And we say, “yeah it’s probably a murre”. Because they are about a small-sized penguin and they’re black and white like a penguin. And their legs are situated really far in the back of their body so when they do stand up, they kind of look like a penguin.

FITZGERALD: Eve and her family run a small wildlife rehab center called Native Animal Recue out of their home in Santa Cruz. They just got their first starving murre of the morning.

EGAN: This is our 348th murre for the year. Since August 4th we’ve been getting them every single day; we’ve gotten 278.

FITZGERALD: Typically Native Animal Rescue gets less than 40 murres a year. Eve says they had big years before, but nothing like this.

EGAN: When we started getting 5, 6, 10 a day, and every day this happening, we thought, “wow this is really different. This is much more than we’ve ever seen before”. 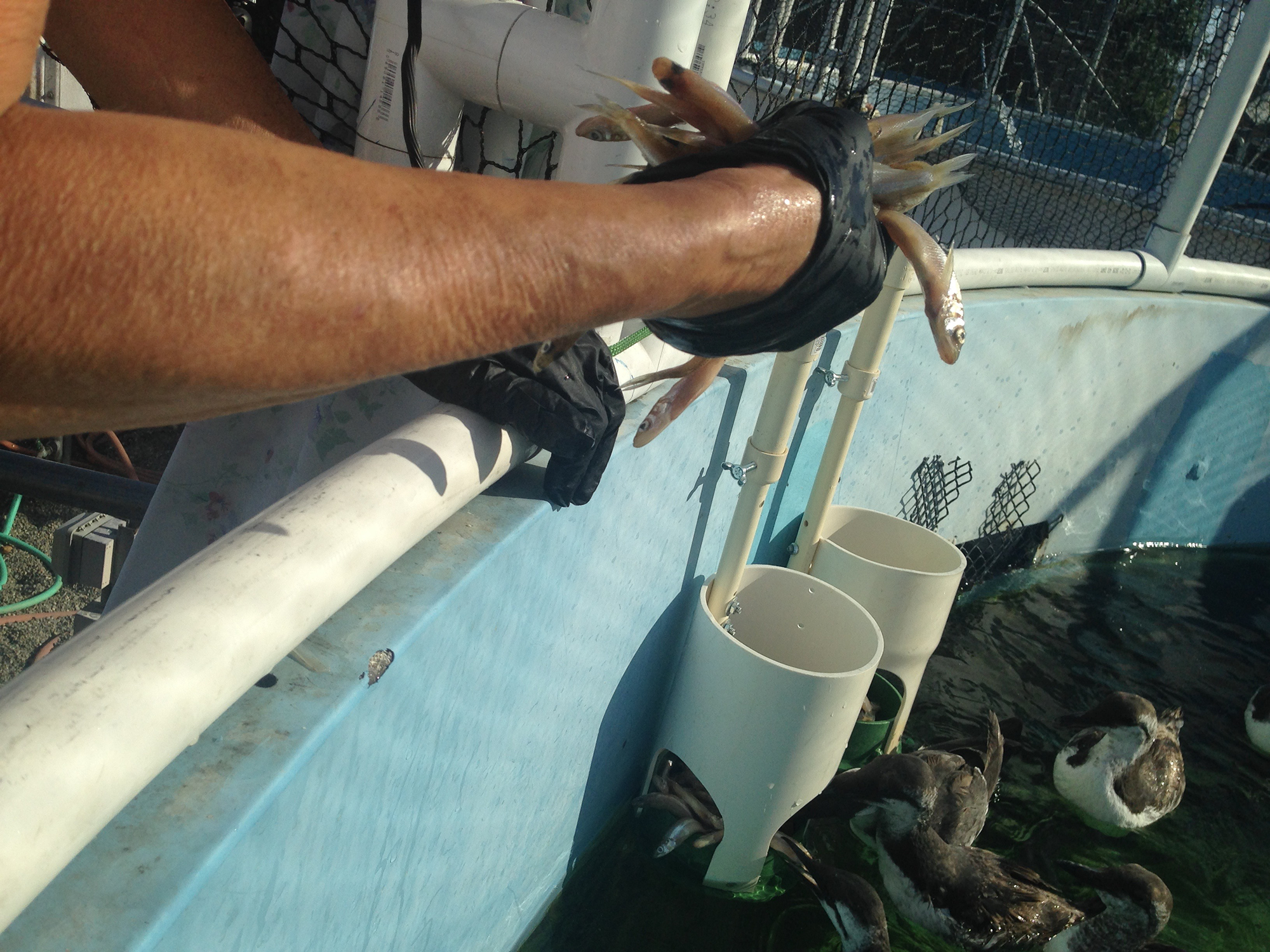 A volunteer feeds smelt to the murres. (Photo: Emmett FitzGerald)

FITZGERALD: Eve’s daughter Lupin Egan is the bird specialist in the family. She takes me back into an old laundry room they’ve converted into an intake facility. She opens up a cardboard carrying case and inside there’s a bedraggled murre.

EGAN: This one’s kind of the feathers are a little scruffy. They’re molting right now so a lot of them don’t have the wing feathers in. This is the case with this one. He’s pretty weak but he’s still got some life in him.

FITZGERALD: Lupin tube-feeds the murres until they can eat fish on their own. This bird isn’t moving much or making any noise, but it doesn’t seem to mind Lupin picking it up.

EGAN: I’ll go ahead and take him out. Use a towel to handle him and keep his head covered to keep him calmer. And then I’ll take him over here and open his mouth, and then go ahead and push the stuff down, pull the tube back out and cover him up again and put him back in his box.

FITZGERALD: If this murre survives a few more days, they’ll transfer it further north to a larger facility called International Bird Rescue up the coast in Fairfield, California.

Michelle Bellizzi is the manager of International Bird Rescue. She says that with all the murres coming in they are just about at capacity.

BELLIZZI: I know that we have 140 murres in house; I did a count today. We got in 30 yesterday, so we’ve got a full house. 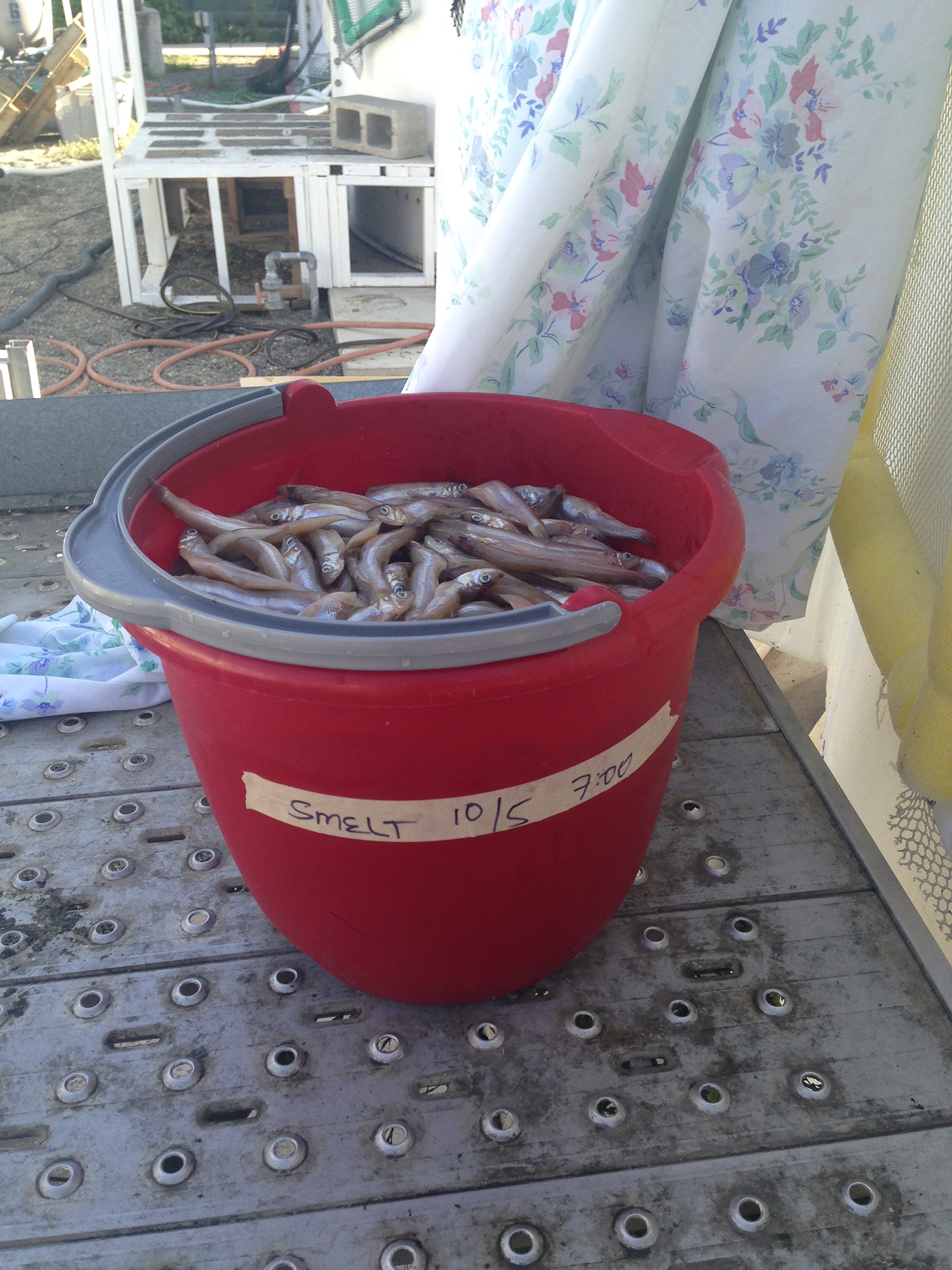 Murres can eat their body weight in fish every day. (Photo: Emmett FitzGerald)

FITZGERALD: They keep the recent arrivals inside dry crates with towels on the floor.

BELLIZZI: And what we do with these guys is, a lot of them have lost their water proofing because they’re on the beach too long and they’ve got feces or fish on them. So they come in and they can’t become waterproof. And they live entirely on water and they need to be able to live in the water full time to be able to forage. So what we do is we give them limited access to water and then we give them these nice warm pens to dry in, where they can preen their feathers and get that stuff off of them.

FITZGERALD: When they get their waterproofing back, the murres move outside into one of several circular tanks filled with water.

There are about 30 murres in this tank. For having been so close to death, they seem in pretty good spirits. Some zip around the surface, others dive beneath each other, and one is beating the water with its wings and splashing all of us. But J.D. Bergeron, the executive director of International Bird Rescue, says you can tell these birds aren’t well.

BERGERON: Their feathers are in pretty bad shape. These birds look like sleek beautiful little penguins when they’re in their best form, you might be able to see a few that are smoother looking but most of them look pretty haggard. Our vet will kill me if I fail to mention that though they look like penguins they’re more closely related to gulls. They’re very distantly related to penguins.

FITZGERALD: The murres in this tank come from several California rescue centers like the one in Santa Cruz. So far International Bird Rescue has taken in about 500 murres this year. Michelle says that with so many coming in they depend on an army of volunteers to keep up.

BELLIZZI: Our volunteers range from college students to retirees, from Joe the plumber to rocket scientists. We actually had rocket scientists who were volunteering and who really preferred playing with cormorants. Who knew?

FITZGERALD: Jennifer Linander is a rehab technician at the center. She says one of the biggest challenges has been getting enough food to go around.

LINANDER: So we actually ordered about a thousand pounds of fish for these guys and we went through it in about a week. We ordered another 1,000 pounds but it wasn’t going to last long enough so we had to order an additional four to five hundred just to keep us going to feed all these murres, we’re going about 160, 180 pounds a day of smelt for the murres that we have in house, they can eat about their body weight in a day.

FITZGERALD: That’s a lot of money for a small non-profit. International Bird Rescue got started back in 1971 after a massive oil spill near the Golden Gate Bridge. A lot of their work comes after oil spills, but the financial equation is different this time around.

JENNIFER: You know a spill that has a responsible party like an oil spill there’s a responsible party where we get reimbursed for those. Since this is just a lack of food and all these guys that are starving that are beaching themselves and being brought here, like this is all out of our expenditure, it’s all out of our pocket, so we’re having to try to find ways to pay for all these hungry birds to eat.

FITZGERALD: The murres washing up on shore don’t have oil on them, and they aren’t sick, just hungry. Cori Gibble, the Seabird Health Program Coordinator at the Marine Wildlife and Veterinary Care and Research Center in Santa Cruz, says that it likely has something to do with the mysterious blob of warm water that’s been circulating in the North Pacific since the summer of 2014. 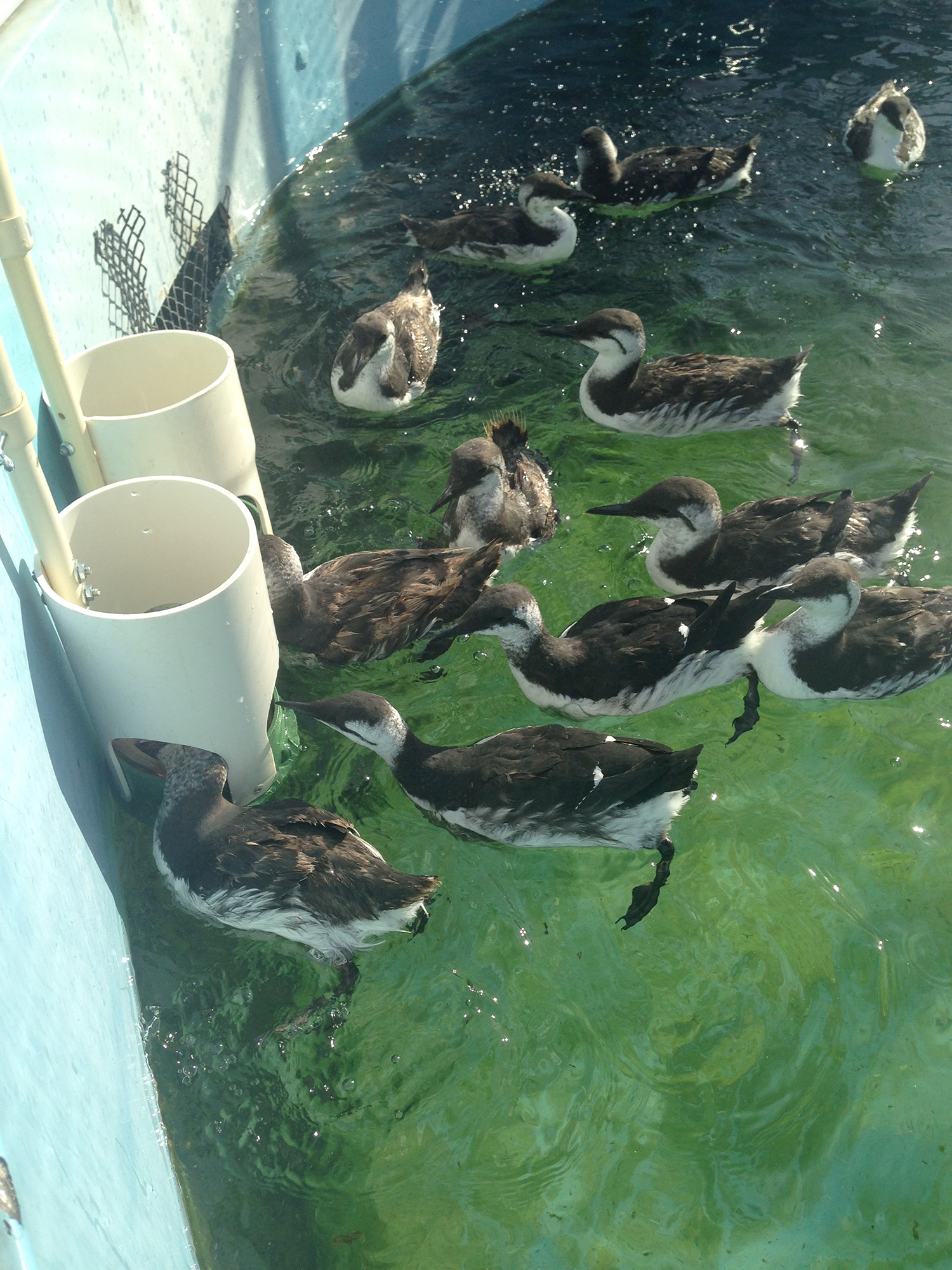 FITZGERALD: Lots of other birds feed on small fish like smelt and anchovies, but murres seem to be the only species affected. Cori and other scientists have a theory about why the murre may be particularly vulnerable, and it gets back to those shabby feathers.

GIBBLE: So when murres take care of their young, they go through this period where they’re molting and they can’t fly, it’s a flightless molt, for like 1 to 2 months after their chicks are hatched.

FITZGERALD: We’re in the middle of that molting period right now, and so Cori thinks it might be limiting the murres ability to adjust to the changing location of their prey.

FITZGERALD: Laird Henkel, director of the Marine Wildlife and Veterinary Care Research Center, is quick to stress this is only the best theory. He says that we just don’t totally understand all of the ways climate change is impacting our ocean ecosystems.

HENKEL: One phrase people are using these days is “global weirding.” And I think that that is something that we’re seeing, the “blob” of warm water offshore is something that’s really never been seen before on this scale in the North Pacific, and I think we really don’t understand the implications of that yet, or what’s causing it exactly.

FITZGERALD: Laird says that while murres are the only seabird dying off right now, they’re clearly not the only species that is suffering from strange water patterns in the North Pacific.

HENKEL: It’s hard to piece together what’s going on with different species. So right now, common murres are mostly what we’re seeing, but then an unusual mortality event was declared by NOAA for Guadalupe fur seals. And earlier this year and last year, there was a significant mortality event for California Sea lions. So, a lot of animals feeding on forage fish in the California current have had issues over the last couple of years. 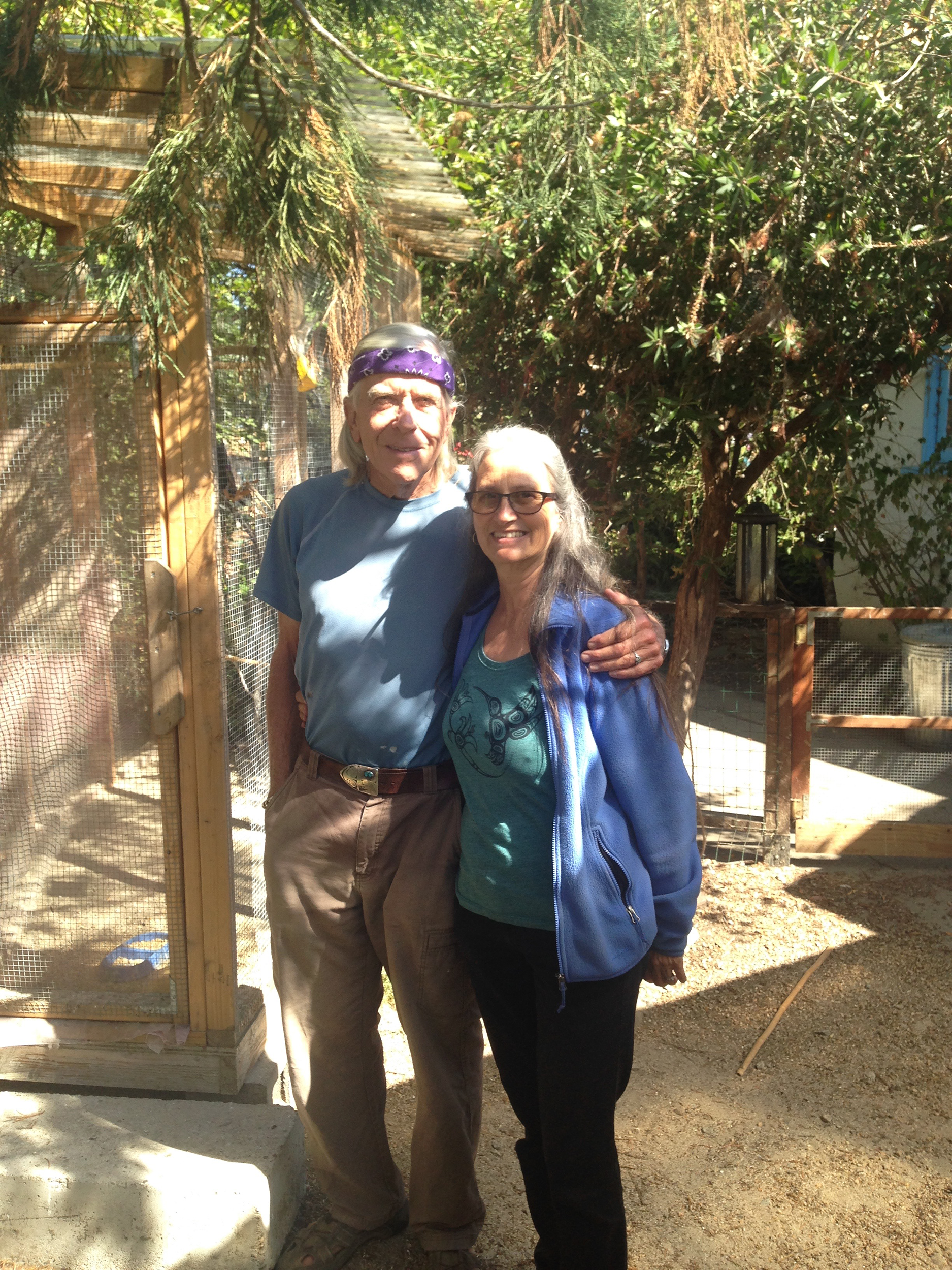 FITZGERALD: Back at International Bird Rescue, J.D. Bergeron says that changes in the climate change are giving them a lot more work to do.

BERGERON: So this is a facility made to handle large numbers of birds and every year we are seeing increasing numbers. This year already we had beaten last year as early as mid August we’d already surpassed it. So this is our biggest year ever.

FITZGERALD: In the past International Bird Rescue mostly responded to oil spills, but bizarre die-offs and starvation events like this one are becoming more common. J.D. worries about how climate change will affect his work in the future, but for now he’s focused on the challenge that’s immediately in front of him, getting all these birds back where they belong. He was on the boat when they released 19 murres near the Golden Gate Bridge.

BERGERON: It was amazing, they were immediately washing and preening and some of them diving, so doing all the stuff they should be doing as wild birds, right away, amazing to watch. We thought releasing 19 murres, we were actually going to see a decrease in the number in care, and then we got 30 in yesterday, so we’re not at the end of this. And we gotta just keep going until all these birds have been taken care of.

FITZGERALD: With a little luck, and a lot of effort, the murres splashing around in this tank will be back at sea soon enough.

For Living on Earth I’m Emmett FitzGerald in the San Francisco Bay.