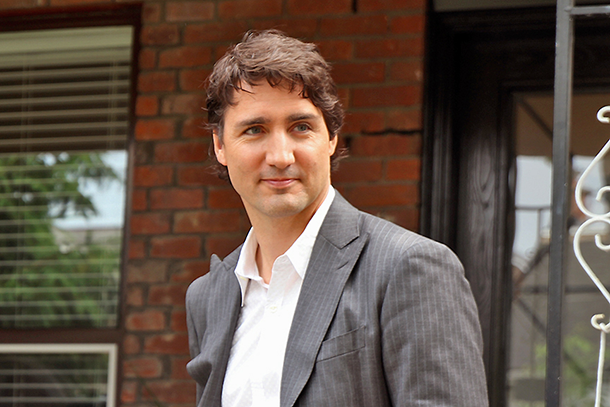 The Leader of the Liberal Party of Canada, Justin Trudeau, delivering a speech in Toronto. (Photo: Alex Guibord, CC BY-ND 2.0)

CURWOOD: It's Living on Earth, I'm Steve Curwood. The Presidential race is heating up across America, but north of the border, a new face from a fabled political dynasty just romped into power with a landslide win that signals considerable change. Gone is the oil-friendly Stephen Harper, and taking over as Prime Minister is the charismatic, handsome Justin Trudeau – son of popular leader Pierre Trudeau - of the left-leaning Liberal Party. Conservative Party leader Harper comes from Alberta, the hub of tar-sands extraction. Mr. Harper pushed hard for more pipelines, including the Keystone XL to bring Canadian oil to Texas. He also pulled out of the Kyoto Protocol climate treaty, questioned the science of climate change, and muzzled environmental scientists. Justin Trudeau has a very different set of priorities, but still, much of the nation’s earnings do come from the extractive industries. So we called up Mike De Souza, investigative resources reporter for Reuters, to find out how Canada’s energy and environment policies might change. Welcome to the program, Mike.

CURWOOD: So what has Justin Trudeau, the incoming Prime Minister put on the record in terms of how he'll deal with climate change?

DE SOUZA: So, in the most recent campaign the Liberal platform has been general. There isn't a comprehensive plan, there are no concrete targets that they're aspiring to achieve apart from a global temperature target. They say that whatever policies they introduce are designed to ensure that global warming does not exceed two degrees Celsius above pre-industrial levels. So they talked about carbon pricing across economy, but they have said that it's up to the provinces to come up with their own individual plans of how they would achieve targets based on their unique industries in each province. There have been some promises for new spending on green energy, green infrastructure that are within the liberal platform, but a lot of it is more about the language and the tone about wanting to do better. The details, well, that remains to be seen.

CURWOOD: Today what are Canada's greenhouse gas emissions and which direction are they headed in: up or down?

DE SOUZA: I would say they've plateaued. I think Canada has generally been in the top 10 to 15 emitters in the world in terms of the absolute emissions. In terms of emissions per person I think Canada is second or third in the world. So there's a lot of parts of the Canadian economy that are becoming more efficient. The Ontario government shut down the coal-fired power plants and that had a significant impact on reducing Canada's carbon footprint. The British Columbia government introduced a carbon tax. The Québec government introduced some form of a very modest carbon tax and then announced a partnership with California on a cap and trade program that they're trying to expand to other partners including Ontario. I would say that Canada's GHGs, they could be heading in the right direction probably not fast enough, but if it is, it's because of action by provincial governments right now. Now the Alberta government is the problem, that's the area where emissions are increasing. There's a government there that has increased a carbon pricing that was already in place and it looks like they'll introduce a more comprehensive plan I would say within the next year, so possibly within the next year we're going to see some movement from Alberta that could also have a significant impact on Canada's carbon footprint going forward.

CURWOOD: So what do you expect incoming Prime Minister Justin Trudeau to do about the tar sands?

DE SOUZA: So ultimately, whatever he does here it'll have to be led I think from the Alberta government. There is a new left-leaning government, a New Democratic party government in Alberta that has promised to address it more so than any previous governments have, and so within Mr. Trudeau's platform, he is going to have to sit down with the premier of Alberta. If the Alberta government decides not to do anything maybe it's at that point that we might see a test of what Mr. Trudeau and his future government is willing to do. But right now, there's still quite a bit of uncertainty about how and if he can tackle this sector.

CURWOOD: How do you think incoming Prime Minister Trudeau will address the specific question of Keystone, the transboundary pipeline?

DE SOUZA: The Liberal Party has supported the Keystone project. They've always viewed it as a proxy in a battle about climate change, and so they support this project based on the economic benefits of it, and it’s an assumption that there would be some efforts or action to crack down on the greenhouse gas emissions from the oil sands. They feel it would or could be cleaner. The Liberal Party has concerns about the environmental regulation process in Canada and changes to environmental laws that were scrapped or rewritten in the past couple of years by the Harper government. So one of the things that they promised to look or review is fixing that environmental review process.

CURWOOD: The Harper administration drew a lot of criticism for muzzling scientists who were talking about climate disruption. What do you think will be the attitude of the new Trudeau administration to having Canadian government scientists talk about findings that they're making?

DE SOUZA: They said that they'll change things. There's been long standing criticism from the Liberal Party of what is perceived to be these muzzling policies and maybe about three weeks before the election day, Justin Trudeau had released an open letter to the public service with a number of points expressing his views that he believed the government should show more respect for public servants, that he believed the previous government wasn't doing that, and he specifically mentioned the muzzling issue and said that if a Liberal government were elected, that it would put a stop to these practices. It would allow scientists to speak freely on their work, but in general I think the type of thing that we've seen in the past eight or nine years in Canada, they have made a firm commitment to put a stop to that.

CURWOOD: So the world is getting together at the climate summit in Paris, end of November, beginning of December. What will be the approach of the Trudeau government be to an international agreement on climate disruption?

DE SOUZA: So what he said so far, Steve, is that there will be a change in tone, that Canada takes this issue seriously, and I think one of the first things is he's going to be there himself. Mr. Harper, during his term in office as Prime Minister, he didn't go to any of the climate change conferences except for the Copenhagen one in 2009. So Mr. Trudeau has said that he will speak and that's the first step in signaling how important he views this issue. He has invited the premiers of each of the provinces and territories in Canada to go with them, but Mr. Trudeau has made a very open and clear and important invitation for them to all come. The problem is though he is being sworn in as Prime Minister - if I remember correctly the date is November 4 - and the Paris Summit is going to be starting a few weeks later. It doesn't give him much time to update Canada's policy and make it more comprehensive, so I believe the previous government did file submission and does have a 2030 target. My understanding is that other countries like the US, countries in Europe have told Canada they believe its submission isn't ambitious enough, so there is pressure from the other countries for Canada to do more. This is the problem that there's likely going to be more of friendly language about wanting to do something without much details. He's agreed to meet with all of the premiers again after the summit to hammer out what each of them is willing to do and what each of them can do and what each of them will do to tackle Canada's carbon footprint.

CURWOOD: Mike De Souza is an Investigative Resources correspondent for Reuters. Thank you so much for taking the time with us today.

After Canadian rout, a quick verdict on Keystone?