A Demand for a Green Transition 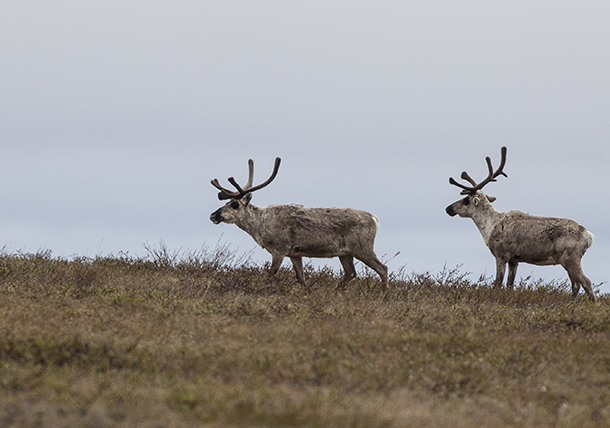 The Bureau of Land Management recently approved a drilling permit for oil and gas extraction in the National Petroleum Reserve-Alaska. NPR-A is the largest single block of public land in the U.S. and is home to caribou and other wildlife. (Photo: Bob Wick/BLM, Flickr CC BY 2.0)

Recent decisions to end fossil fuel extraction, including Shell’s drilling hiatus in the Arctic and President Obama’s veto of the Keystone XL pipeline are offset by new permits in the Arctic. Commentator Derrick Jackson argues that the US must make climate change a priority and act swiftly and responsibly to be a leading climate change activist that the world needs.

CURWOOD: Well, the President’s decision to nix the Keystone XL pipeline comes against the backdrop of somewhat contradictory moves by his Administration when it comes to fossil fuel policy. And those contradictions set commentator Derrick Jackson thinking.

JACKSON: Actions at home give hope that the United States finally intends to be a world climate leader abroad. Last month, the Obama administration canceled Arctic offshore oil leases through 2017. This was after Shell gave up operations in the Chukchi Sea having blown $7 billion to find very little oil.

Then came the decision by the president to cancel the Keystone XL pipeline because, he said, approving it would have “undercut” America’s leadership to reduce greenhouse gas emissions, and we must leave some fossil fuels in the ground.

To be sure, the administration’s decisions are mixed. Shell’s arctic cancellation actually bailed out the White House, which approved the drilling as part of its “all of the above” energy strategy; a strategy that included a recent oil and gas-drilling permit on Alaska’s national petroleum reserve. Despite the reserve’s ecological significance for caribou, migratory birds and grizzly bears, the government says the new operation will "provide additional economic security for Alaskans as well as a new source of oil for the Trans-Alaska Pipeline System.”

That came as sort of a consolation prize for Alaska Governor Bill Walker. With native coastal communities losing land to rising seas, Walker recently claimed that the best way to pay to relocate those villages is to drill for more oil. In a state with no sales or income tax that derives 90 percent of its revenues from oil, Walker knows only one way to generate cash - Drill Baby Drill.

Such thinking is now trumped by the urgency of climate change. As Obama said in canceling Keystone, it is time to put aside the old rules that America cannot promote economic growth and protect the environment at the same time. He boasted that the nation’s transition to a clean energy economy is happening faster than many anticipated. But he and his successor in the White House could accelerate that transition by going further.

Not only should the pause on offshore leases become a permanent prohibition, the government should give out no new permits in Alaska, the Atlantic or on any public lands. The nation should instead accelerate its investments in solar and bring on line more projects such as the newly proposed 100-turbine offshore wind farm south of Martha’s Vineyard.

The United States, with its massive environmental footprint, is late to the game on climate change. But it is not too late. With the decisions on Arctic oil leases and Keystone, this nation is finally becoming the big foot it needs to be in Paris.

The ecological significance of the National Petroleum Reserve in Alaska

The impact of climate change in Alaska