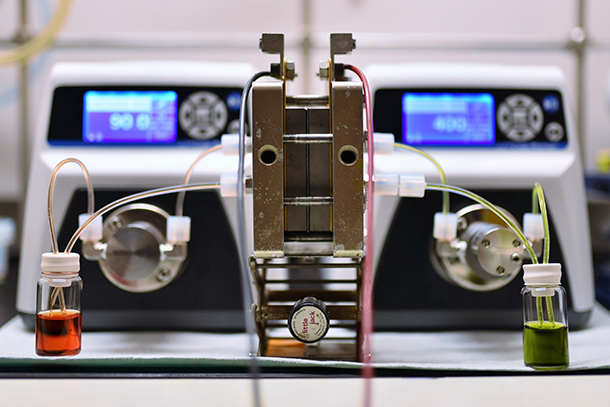 CURWOOD: The UN climate talks in Paris at the end of this month give the world a chance to craft a meaningful treaty to control global warming gas emissions. Wind and solar have huge potential, but since the sun doesn’t always shine and the wind doesn’t always blow the big hurdle in expanding the use of renewables is the lack of cheap and efficient storage of that energy. That could be about to change. Breakthroughs in the technology of what are called mega-flow batteries would seem to make them commercially viable in the near future. To find out more, I went to visit a couple of senior academics at a university near our office.

AZIZ: I’m Michael Aziz, the Gene and Tracy Sykes professor of Materials and Energy Technologies in the Harvard School of Engineering and Applied Sciences.

GORDON: I’m Roy Gordon, I’m the Cabot professor of Chemistry and Materials Science in the Harvard School of Engineering and Applied Sciences.

CURWOOD: Roy Gordon has a string of patents to his name for developing various electro-chemical and thin film technologies used for such things as semiconductors, solar cells and advanced window insulation, and he likes to be on the frontiers of science and technology.

GORDON: I’ve been working on energy technologies for decades, but now that these renewable sources are becoming more widely used, the storage issue has become front and center.

CURWOOD: But a battery that would really work needed the input of an energy-systems expert like Michael Aziz – who also has a few patents, including ones for flow batteries to solve the problems of the ones we usually use.

AZIZ: Think about running your home on the electricity from your rooftop solar panels that you get during the day. You need to be able to run that battery for hours before it’s drained. Traditional solid electrode batteries are drained within an hour. If you want more energy, you can stack up banks and banks of batteries, but you’re paying not just for the engineering to give you the energy and the materials that give you the energy, you’re paying for the engineering to give you extra power you don’t need. As a result, traditional batteries are just way too expensive to be used this way.

CURWOOD: To address this inefficiency, professors Aziz, Gordon and their colleagues set out to develop an inexpensive megaflow battery, and they think they’ve come up with a way to make them safe as well as commercially viable. Expensive flow batteries using precious metals like vanadium have been around for years. They separate the energy storage from the electrode interface that releases or charges the battery, by using separate tanks of positive and negative electrolytes—chemicals that can store and transmit electricity.

AZIZ: The advantage of the flow battery idea is: you can design the cell—the area of the electrodes—for just how much power you need and no more, and then you can get more and more energy with just bigger and bigger tanks full of chemicals. If the chemicals are cheap, then you have a winning proposition for much lower cost storage of intermittent, renewable electricity for long-duration discharge.

CURWOOD: To see how this team’s latest flow battery works, we headed off to the lab to see it in action.

[WALKING DOWN HALL AND INTO LAB]

CURWOOD: There we found one of the students working on the project.

CURWOOD: Can I ask your name?

LIN: My name is Kai Xiang. I’m a third-year graduate student from Professor Roy Gordon’s lab. I’m doing the synthesis of the electro-active molecules, but I’m also doing the electrochemical studies on those molecules as well in Professor Aziz’s lab.

LIN: So this is the flow battery setup. We have five central components here: so we have two pumps, and two reservoirs, one for the negative electrolyte, one for the positive electrolyte. And the pump basically pumps the electrolytes into the electrochemical cell where the electrochemical reaction takes place, either to charge the species or to discharge the species to get the electricity out. So, one of the benefits of the flow battery is that we can change the energy of the battery. For a laboratory test, we use as small volume as possible. I’m using like 5mL of the electrolyte, but you can change that to however you want it based on the need of the application. So the energy of the battery is really arbitrary.

[WALKING BACK TO OFFICE]

CURWOOD: Last year this Harvard team figured out one could replace the precious vanadium-based negative solution with a Quinone, a chemical compound fairly similar to one found in rhubarb. But back in the office Professor Gordon told me there was a problem with the chemicals on the positive side.

GORDON: The other side of the battery used last year in our lab is based on bromine. Bromine is a toxic and corrosive material, so that’s not something that you’d want to have in tanks in your basement. But we replaced that with a new chemical that is much safer; it’s actually a food additive: ferrocyanide. Now, cyanide sounds scary and dangerous, now, this is not poisonous. So, we think this is safe to have in your home or your basement or your neighborhood.

CURWOOD: But there was still a problem. This safer chemical for the positive side prefers an alkaline, rather than the acidic environment that was used for the earlier battery. But it didn’t take long, said Professor Aziz, for another member of the team to find answer. The post-doc that was working on the project, Mike Marshak, now an Assistant Professor of Chemistry at the University of Colorado, he noticed that the quinones could also be made to be soluble in alkaline solution and that opened up the world of alkaline electrochemistry as well. The ferrocyanide was a well-known positive electrode material that’s safe and stable in alkaline solution. So, we had to develop a quinone that was highly soluble and stable in alkaline solution to match up against that ferrocyanide to make the new battery that we just reported this year. 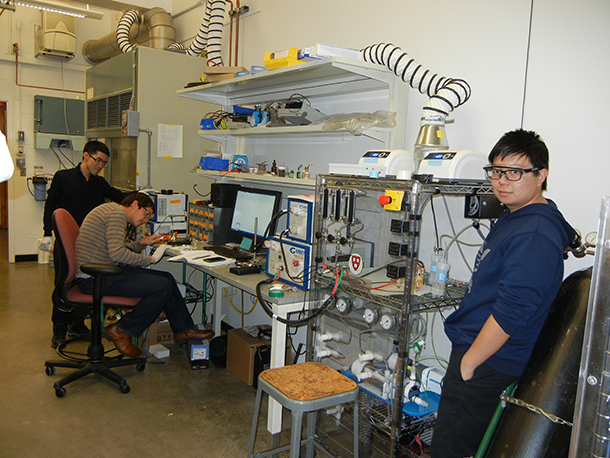 CURWOOD: So, when it comes to scaling up, how does your organic megaflow battery, professors, stand up say against the Tesla Powerwall with its lithium-ion battery?

AZIZ: Well, the lithium-ion battery has its limitations. The powerwall looks very attractive, but it’s still constrained by the energy to power ratio. It’s of course much further advanced than our flow battery at this point; our battery’s still a little baby in my lab. And so it’s a bit hard to compare, but when we project what could happen in the scale up of our battery, we see that it could come in at a third of the cost of lithium batteries once it’s in mass production.

CURWOOD: And how does the megaflow battery compare to lithium-ion in terms of safety?

AZIZ: This is where different storage solutions are going to be best for different purposes. If you want to drive a car, an electric car, you want a battery that’s very light and doesn’t take much space. That’s not our battery; that’s lithium. We dissolve our molecules in water, which takes up space and is heavy, but it makes it safe. Because if you’re going to store vast amounts of electrical energy in one place, you have to worry about sudden accidental release. So, dissolving our molecules in water gives our battery too much weight to drive, but it makes it safe.

CURWOOD: Professors Aziz and Gordon envision that this technology will be cheap, safe, and can be made small enough to power a single-family home, or big enough to power an entire community.

GORDON: The tanks that would be needed are on the scale of what you have in your basement as a hot water tank, but you need two of them because there are two different sides to the battery.

CURWOOD: And how cheap is it?

GORDON: Well, we think it meets the projected cost goals that the Department of Energy has put forward. That means that we’ll be able to use it effectively.

CURWOOD: How soon, how likely is it we’ll see this on the market?

AZIZ: It’s probably three years before there are commercial systems ready for scale because you have to design, build, test, fail, figure out what went wrong, fix it, redesign, build, succeed, and then go up to the next scale. But there’s also the possibility that with our newest chemistry—it’s non-corrosive enough—it might just serve as a drop-in replacement for much more mature flow battery systems that are using electrolytes now that are just too expensive to make it big. And so, we’re investigating that possibility now. If it works out that our chemistry can get used and licensed, that only a small amount of re-engineering is required for, then this could be present in the marketplace much sooner than that. 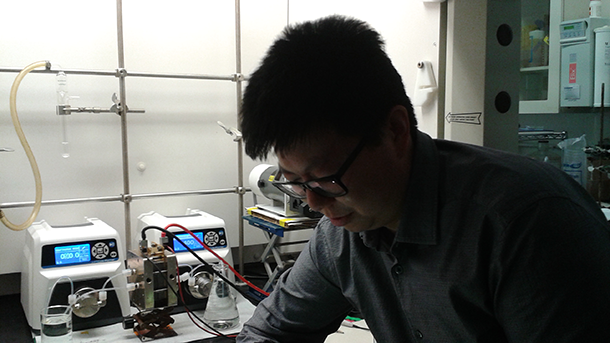 CURWOOD: How exciting is this discovery on a scale of 1 to 10 on the stuff that you’ve done in your career?

GORDON: Well, this is right up at the top because if our future is going to be sustainable, as a civilization, we need to be able to solve these problems.

AZIZ: This is certainly the most exciting thing I’ve worked on because the implications are so global. The greatest challenge facing humanity this century—I’m convinced—is finding the energy to power a civilization of 10 billion people without unacceptable consequences to the environment. Renewable energy is front and center in that challenge, and this could really be a very significant enabler of renewable energy.

CURWOOD: There’s more on the flow battery at our website, LOE.org.

The Chemistry Behind The Battery That Could Outperform Tesla’s Powerwall