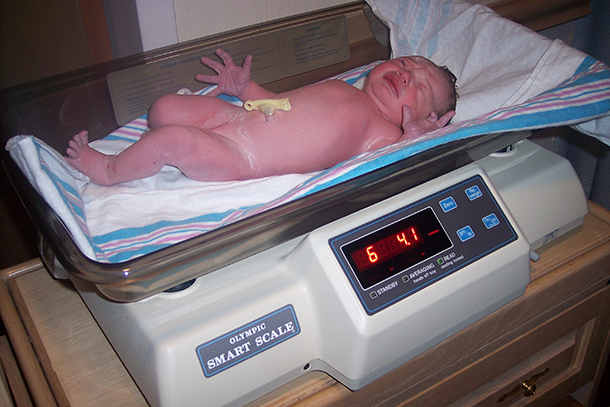 Babies exposed to certain chemicals in the womb have a higher risk of weight and health related issues later in life. (Photo: Drpoulette from Mexico City, Mexico, Wikimedia Commons CC BY 2.0)

Inadvertent chemical exposures from dumping can provide epidemiologists with unique insights into the possible effects products can have on human health. Brown University professor Joseph Braun tells host Steve Curwood about a group of pregnant women in Cincinnati with high blood levels of the industrial chemical, PFOA, whose children were fatter, possibly giving them an increased risk of health problems later.

CURWOOD: Well, many chemicals in common use have made things easier – from detergents and industrial lubricants to insecticides and flame retardants - but exposure to some of those same products might be working against our health. In particular, some common chemicals ingested during pregnancy seem capable of promoting obesity in offspring. It turns out that some children who were born in the Cincinnati area downstream from some industrial dumping in the Ohio River now have more fat if their mothers had roughly twice the level of a certain chemical in their blood during pregnancy. Dr. Joseph Braun, Assistant Professor of Epidemiology at Brown University is lead author of a study of these children in the Journal of Obesity. Dr. Braun, welcome to Living on Earth.

BRAUN: Thank you for having me.

CURWOOD: So it's not ethical to test people by exposing them to possibly toxic chemicals, so in this case I gather that upriver, up the Ohio River, there was some sort of a chemical dump containing these chemicals?

BRAUN: Yes, so what had happened in the past is there was a DuPont plant up in Parkersburg, West Virginia, that had been manufacturing fluoro polymers. So these chemicals have a variety of uses. They include being used in industrial processes as a surfactant to make fluoro polymers and to make other chemicals. They are also used to repel stains or to repel water as a coating in stain and water resistant textiles. They're also used in some food packaging, places where you have both water and oil and you don't want that water oil to soak the paper that's been used as packaging, and they're also used in firefighting foams, and in the process of manufacturing these chemicals they used one specific chemical called perfluorooctanoic acid, and up until 2000 they were releasing this chemical into the environment.

CURWOOD: So in this case it's not necessarily how these women in Cincinnati were exposed to this chemical but a possibility.

BRAUN: Exactly. We suspected the vast majority of exposure to these chemicals comes from the diet. So we speculate that the elevated levels of this particular chemical perfluorooctanoic acid or PFOA could be related to the ingestion of contaminated drinking water. However, we were not able to show that in this study and this is something we're trying to look at in our future work.

CURWOOD: Now, you suspect these chemicals are in a class that you scientists have called obesogens. What are obesogens and how do they affect people?

BRAUN: So, obesogens are chemicals that upon exposure to them may increase the risk of obesity or other diseases related to obesity, like diabetes or cardiovascular disease. And obesogens may work by affecting hormonal systems that are involved in programming fetal growth or growth in the child. They may also affect the programming of our appetite or metabolism. Or they could affect how our genes are expressed.

CURWOOD: So what did you look for in your study exactly?

BRAUN: We measure the concentration of several perfluoroalkyl substances in the blood of these women, including perfluorooctanoic acid, which we often call PFOA. So what we did is we looked at the relationship between levels of these chemicals and women's blood during pregnancy and their children's adiposity at eight years of age. 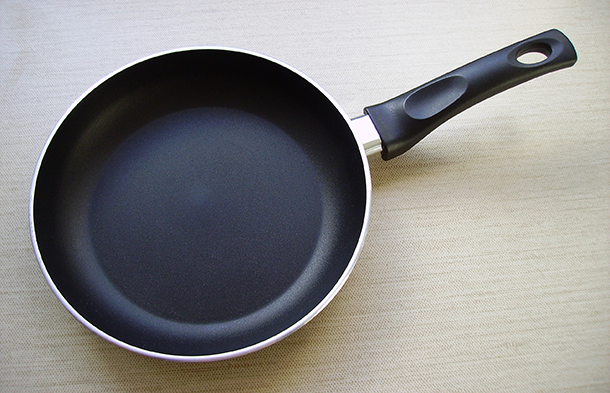 BRAUN: Yeah, we had things like body mass index, their waist circumference and then an estimate of their total body fat percent in our study.

CURWOOD: So, when you studied these pregnant women's exposure perfluorooctanoic acid, what did you find?

BRAUN: So, compared to children born to women in the lowest third of exposure to this chemical PFOA, we found that the children born to women with higher concentrations of PFOA in their blood had .9 to 2.4 pounds more body fat at eight years of age. We worry about this for a couple of reasons. One is that any amount of increase in body fat is bad because it's very difficult to lose fat once you gain it. We can get children to lose weight but it's difficult to get them to sustain that weight loss, and the decreases in weight aren't as big as we'd like. In addition, increases in body fat, any increase even these small amounts can be associated with later life risk of disease like some cancers, cardiovascular disease and diabetes.

CURWOOD: How prevalent this PFOA among Americans these days?

BRAUN: So, levels of these chemicals have been going down over the last few years because they're being phased out of commerce voluntarily by the manufacturers that use and make them, however, they are still detectable in over 90 percent of people in this country, and we're concerned though as well because these are persistent chemicals that have long half-lives in the environment and they have a long half-life in our body. They can stick around in our body for over three years at a time and so this is the concern.

CURWOOD: So we have this obesity epidemic in America. Two-thirds of us are overweight, fully a third are obese. What relationship if any do you think this is to the widespread exposure to PFOA chemicals?

BRAUN: We don't know for certain that PFOA or this class of perfluoroalkyl substances is responsible for the obesity epidemic, nor do we know if the broader class of chemical obesogens is responsible for the epidemic. However, we do know that some chemical exposures, some of which we suspect are obesogens, could increase an individual's risk for obesity or increase their body fat. So we have only I think begun unpackaging these associations between obesity and genetics, environment and other factors that we think contribute to obesity like diet or lack of exercise.

CURWOOD: Joseph Braun is Assistant Professor of Epidemiology at Brown University. His paper is published in the "Journal of Obesity. Thank you so much for taking the time today, Dr. Brown.

BRAUN: Thank you for having me.