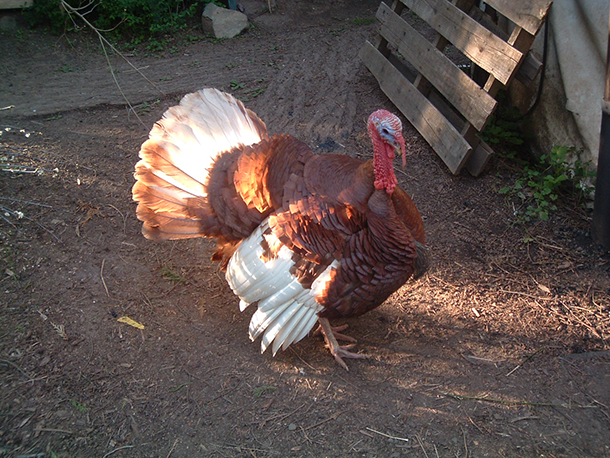 Almost all of the turkeys eaten in the United States are the same species: the Broad-Breasted White, but as Living on Earth’s Bobby Bascomb reports, heritage breeds of turkeys, like the Bourbon Red and Blue Slate, are making a comeback.

CURWOOD: Yes, at Thanksgiving, the turkey reluctantly takes pride of place on dinner tables across America. Today 99 percent of the turkeys Americans eat over the holidays are the same species—the broad-breasted white. But as people increasingly choose organic and locally grown food, interest in old-fashioned breeds of livestock, including turkeys, is rising.

Ancient varieties of turkeys are enjoying a come-back—as Living on Earth’s Bobby Bascomb discovered down on a farm in Massachusetts, the state known for the very first Thanksgiving.

BASCOMB: Kate Stillman runs a family farm. Behind her mustard-colored farmhouse small fields bordered by stonewalls are dotted with sheep and turkeys. But these are no ordinary turkeys.

Turkey and sheep are pastured together at the Stillman turkey farm. Turkeys eat insects that would otherwise bother the sheep. (Photo: Bobby Bascomb)

STILLMAN: If you look at the heritage turkeys, their heads are beautiful! These are blue slates that we're looking at and most of their head is this iridescent light sky blue color with a red neck and I mean, the colors are fantastic but they're very reptile looking.

BASCOMB: Kate and her husband Aidan raised 50 heritage turkeys this year. They also raised about 200 of the more conventional white turkeys.

STILLMAN: The heritage ones are—well, they look like they don’t have that big of breasts. They're a little leaner, slimmer birds.

BASCOMB: But a trim turkey with a small breast isn't what most people want on their Thanksgiving table.

SMITH: For whatever reason, Americans love the breast and the white meat.

BASCOMB: Andy Smith is a turkey historian. He wrote the book on turkeys—literally. His book, “Turkey: An American Tale,” traces the history of our favorite fowl. The first European explorers took wild American turkeys back to Europe where breeders started to raise them—for their feathers.

Where did its face go? Many species of heirloom turkeys have brightly colored wrinkly skin. (Photo: Marc Renaghan)

SMITH: And hence their names: black and white and Bourbon red and buff and slate, etcetera. The exception to that of course was the bronze turkey, which was the largest heritage breed and had the largest breast.

BASCOMB: That broad-breasted bronze was crossed with the Holland White to create the turkey we know today—73 million of them will be eaten over the holidays. Smith says most of them are raised on factory farms.

BASCOMB: Milton Madison, senior agricultural economist at the USDA, says most turkeys are kept in big barns. And as for removing beaks and toes, he describes it as more of a turkey pedicure.

MADISON: At times the toes and beaks will be trimmed slightly so that they're a little more blunt. Similar to trimming your finger nails so that you don't scratch yourself or others around you.

BASCOMB: Raising free-range heirloom turkeys is more expensive than mass producing them. They cost three times as much to buy as babies, and take several months longer to mature. A heritage turkey from the Stillman’s will cost $100, compared with about $60 for the traditional birds. But people are willing to pay. Don Schrider of the American Livestock Breeds Conservancy says that’s going to help save these birds from extinction.

SCHRIDER: If people eat heritage turkeys then more breeding stock is maintained and then the next season more heritage turkeys can be produced. And it actually gives them a job and the population grows.

BASCOMB: The number of heirloom birds has increased eight fold in the last ten years. Farmer Kate says people like the taste of the old-fashioned birds.

STILLMAN: The heritage birds have a higher percentage of dark meat, which for dark meat lovers—I mean, that’s usually the more flavorful part of the turkey. Almost everybody who ordered a turkey from us last year has ordered two turkeys. So I don't know if they're thinking they're going to pop one in the freezer and keep it for Christmas or something like that but people raved about the turkeys.

BASCOMB: The demand's been so great this year that the Stillmans actually ran out of heirloom birds.

STILLMAN: You know, I had somebody call me this morning and she said to me, ‘oh please Kate, can we get a turkey from you, we've been away I really wanted to call.’ And she's been a really good customer. We were supposed to be saving two turkeys for my aunt for Thanksgiving so I called my mother and I’m like, ‘well you guys are only getting one turkey because I really couldn't say no to her.’

BASCOMB: And so come Thursday the Stillmans might go without a heritage turkey at the center of their table, but they’ll have made a lot of Massachusetts families very happy. For Living on Earth, I'm Bobby Bascomb.

CURWOOD: -- By the way, Stillman’s farm has grown since Bobby visited -- this year they’ll sell some 100 heritage turkeys – and 800 conventional ones.

Stillman's at the Turkey Farm