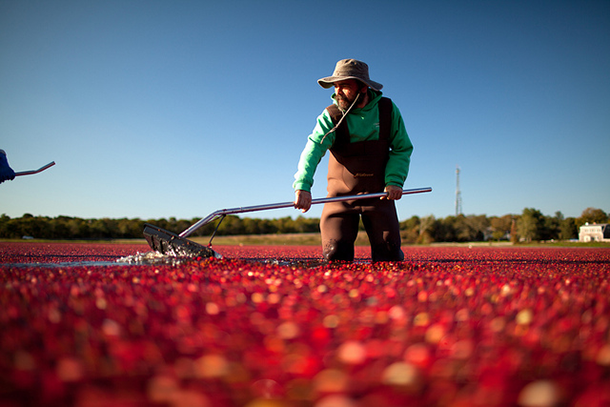 Although cranberries can be dry-harvested, most of the U.S. crop is harvested when growers flood the fields to collect the berries. (Photo: Massachusetts Office of Travel, Flickr CC BY-ND 2.0)

Living on Earth’s Emily Taylor brings us an audio postcard of an old Thanksgiving standby: the cranberry.

CURWOOD: Well, that first Thanksgiving table in Plymouth, Massachusetts featured a food more American than apple pie—the cranberry, or at least that’s how the legend goes. Cranberries are one of the most healthful foods on the holiday table. But as Living on Earth’s Emily Taylor found when she headed to the cranberry bogs, that’s not why people pile on the cranberry sauce.

CAKOUNES: My name is Leo Cakounes and I run Cape Farm Supply and Cranberry Company.

CAKOUNES: Naturally what I think of when I hear the word cranberry is my mortgage payment because basically that's what we do for a living is grow cranberries.

MAN: Thanksgiving time—so cook them up for turkey.

MAN: I suppose cranberry sauce and having Thanksgiving dinner is definitely the theme. 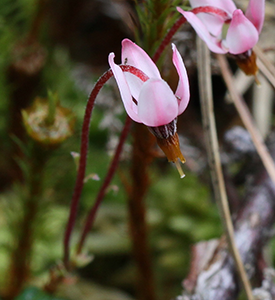 Cranberries were originally called “Craneberries” by the Pilgrims because their small, pink blossoms reminded them of the head and bill of a Sandhill crane. (Photo: naturalhistoryman, Flickr CC BY-NC-ND 2.0)

CAKOUNES: There's a lot of nostalgia with cranberries, associated with Thanksgiving and that's understandable but for us it's a crop that we grow for the purpose of making a living.

MAN: Well, I used to go wild cranberry picking on the Cape with my dad. He'd always take me up on the dunes and show me all the hotspots.

WOMAN: Umm fifth grade. I don’t know, I think I had a dream about a bog. I don't know. It was kind of weird, but fifth grade.

MAN: Since I was a child. I think I was fascinated the first time I saw a cranberry bog.

CAKOUNES: The harvesting process of cranberries is probably the most interesting process because that's the time of year most people want to come and see a cranberry bog.

WOMAN: (singing) Did you ever go to the cranberry bogs? Some of the houses are hewed out of logs. The walls are of boards that are sawed out of pine. That grow in this country called cranberry mine.

CAKOUNES: There's two basic kinds of harvesting. There's the dry harvest. The dry harvest is done first, usually mid September. It's done when the bog has to be completely dry, that means no dew or anything on it. The dry harvesting produces what's called the fresh fruit. Which is the large cranberries that you buy in the store that the consumer ends up buying, the actual cranberry itself.

WOMAN: He eats them plain, right out of the box. He and his sister both love to eat the cranberries plain.

MAN: I actually eat them plain a lot. I remember going to the museum and seeing them bounce down the little stairway for grating. We'd just pop them in our mouth.

WOMAN: I feel very puckered up and I feel like I'm going to eat something sour. I'm not interested at all (laughs). 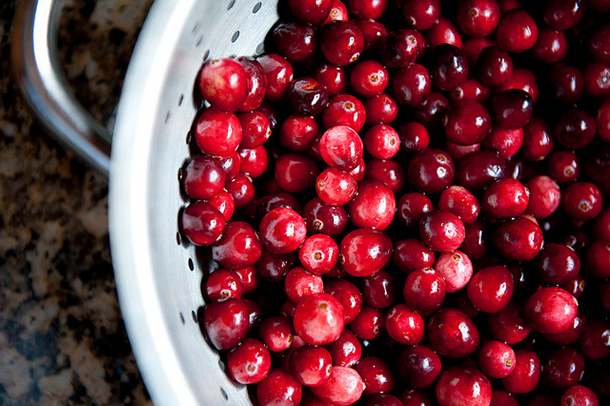 Cranberries are one of three native fruits of North American that are grown commercially. (Photo: catharticflux, Flickr CC BY-NC-ND 2.0)

MAN: The first time I had real cranberry sauce made with whole cranberries, I was blown away. It was marvelous stuff.

CAKOUNES: The second kind of harvest, which is probably most familiar to people is called the ‘wet harvest.’ And we drive a machine out on the bog which beats the berries off the vine and then coral them with either boards or a cranberry barrier. And then those berries are pumped or loaded into an open truck with a conveyor and then they're shipped to the supplier. And they're actually called processed fruit. Those berries become your concentrate for drinks. They become your cranberry sauce.

MAN: For years I thought cranberry sauce was the stuff shaped like a can.

WOMAN: When I was a kid the only cranberries we ate were out of a can. But my mom would just put it on the plate like, whole in this gelatinous mass, you know. And she'd open up one end and it would just ooze out the other end and be like slurping sounds.

WOMAN: The stuff in a can. You just sort of squish it out of the can and it sits there and jiggles on the plate.

WOMAN: That's right and you slice it, you can't even serve it with a spoon.

CAKOUNES: The market for fresh fruit hasn't really increased that much. There are still some people out there who are still dedicated to buy fresh cranberries and serve them on their Thanksgiving table and we think that's wonderful. But we are really working hard producing new products. Hoping we can get into the candy market and the cereal market which will pretty much help us year round as opposed to waiting for one Thanksgiving dinner to pay our bills.

CURWOOD: Our cranberry audio postcard was produced by Emily Taylor and Dennis Foley.