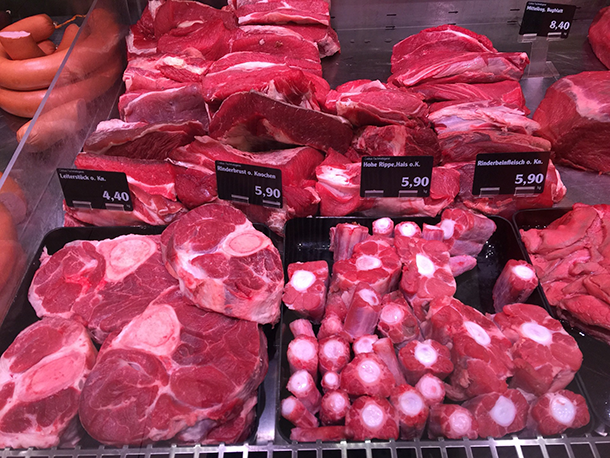 Earlier this year, the WHO said that processed meats cause cancer, but some think that this is a well-timed conspiracy before the COP21 meeting in Paris in December 2015. (Photo: intermac, CC0, public domain)

In this week’s trip beyond the headlines, Peter Dykstra tells host Steve Curwood about EPA’s enforcement of federal regulations in states, the claim of a conspiracy to brand red meat as a health hazard, early retirement of Exxon’s PR executive and how opening canals can allow more than just ships to pass between seas.

CURWOOD: It’s Living on Earth, I'm Steve Curwood. Time to catch up with what’s beyond the headlines now. Peter Dykstra’s our guide. He’s with the DailyClimate.org and EHN.org, that’s Environmental Health News, and is on the line from Conyers, Georgia. Hi there, Peter.

DYKSTRA: Hi, Steve. A not-so-veiled threat from the EPA caught my eye this week. The federal agency informed the state of North Carolina that its environmental enforcement and regulations are so weak that the Feds may swoop in and take over.

CURWOOD: Whoa, that’s a pretty serious move if it happens. How did it come to this?

DYKSTRA: The big catalyst is a state effort to block local environmental groups from doing something that’s a time-honored part of environmental politics – challenging pollution permits, in this case for a cement plant and a limestone quarry. EPA says the state should not shut out its own citizens from the process. North Carolina says it’s all a big misunderstanding. The federal EPA has tangled with states before for failing to enforce federal pollution laws. But this action comes at a time when many states are already hauling EPA into court over clean energy and water pollution rules, and it’s one to watch. This could play out over months or even years.

CURWOOD: I’m sure you’ll help us keep an eye on it. What’s next?

DYKSTRA: Remember the uproar over the World Health Organization’s report on red and processed meats and cancer risk?

CURWOOD: Of course. It was bacon’s day in the sun about a month ago.

DYKSTRA: Well, I’d recommend against eating month-old bacon that’s been left out in the sun! But that apart, some have seen a sinister motive in all this much ado about meat. Social media, Rush Limbaugh, the Wall Street Journal, and Fox News smell a climate change conspiracy, because after all, large agriculture and meat are bad for the climate, right? A journal op-ed said the WHO report was “particularly well timed” for the Paris climate talks; at least three different Fox News shows defended bacon’s honor while connecting those same dots, and Rush Limbaugh said “these jerks at the United Nations are advancing a political agenda.”

CURWOOD: Uh, so, Peter, did they offer any proof that this was a big conspiracy?

DYKSTRA: Humph, you and your “proof.” You know, that’s why people hate journalists. We’re talking about the United Nations against bacon, for goodness’ sake!

CURWOOD: Yeah, so did they offer any proof?

DYKSTRA: Steve, why do you hate bacon so much?

CURWOOD: Oh, I get it...obfuscation is the name of this game for this sizzling story, huh? Well, all right, let’s pull something out of the history vault for this week instead. What have you got?

DYKSTRA: In November of 1869, the Suez Canal opened, and it changed a lot of things: The Canal cut a few thousand miles off shipping between Europe and Asia. It hosted its first oil shipment via tanker in 1892, and the oil business certainly helped the Canal become a strategic flashpoint, notably in 1956 when Israel, France and Britain invaded Egypt, which caused the Canal to shut for six months. All of which brings us to the environmental side.

CURWOOD: Uh, which is?

DYKSTRA: Well, pretty much from its first days, Suez became a passageway for species, as well as ships. Non-native jellyfish, crabs and other sea life moved between the Red Sea at the south end of the canal, and the Mediterranean at the north end. And since cargo ships have gotten a wee bit bigger since 1869, canals have to grow too. A major expansion plan for Suez has marine scientists worried that the wider, deeper canal could multiply the invasive species problem.

CURWOOD: We’ve covered similar worries about the planned canal across Nicaragua, connecting the Atlantic and the Pacific.

DYKSTRA: Well, they first tried to build the Nicaragua Canal around the same time as Suez, but it failed, and in 1914, the Panama Canal became the shortcut through the Americas.

And one final note on the present, rather than the past: Ken Cohen, the Exxon Mobil spokesman, announced his retirement this past week. He’s been much in the news lately, including an interview with you, Mr. Curwood, a few weeks ago, responding for Exxon to news reports on how the company dealt with information from its own scientists on climate change over the years. Ken Cohen will turn 65 in January, which Exxon says is its mandatory retirement age.

CURWOOD: Well, folks who find themselves in the middle of a storm of criticism don’t always answer interview requests, so whatever you think of the Exxon story, we were grateful that Ken Cohen did agree to come on the show – and we wish him well in his retirement. Peter Dykstra is with EHN.org and the DailyClimate.org. Thanks, Peter.

DYKSTRA: All right, Steve, thanks a lot, talk to you next time.

The Climate Agenda Behind the Bacon Scare

Egypt's Expansion of the Suez Canal Could Ruin the Mediterranean Sea