What is the Carbon Footprint of a Typical Thanksgiving? 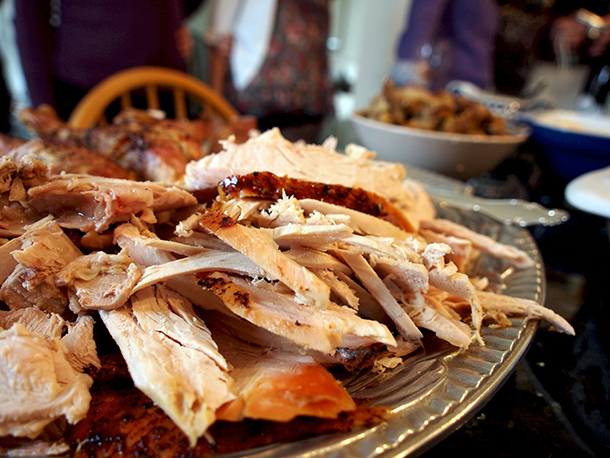 The traditional Thanksgiving Day meal might be a belt-buster, but it won't bust your carbon footprint score. (Photo: Jack Amick, Flickr CC BY-NC 2.0)

Each year, Americans travel across the country to share feasts with family and friends, and all of this consumption comes at a cost to the climate. The Allegheny Front's Lou Blouin investigates the carbon footprint of Thanksgiving.

CURWOOD: By now, many of us are contemplating that Thanksgiving turkey in the rear view mirror; maybe we’ve even finished the leftovers. And perhaps we vow we won’t indulge quite as much next year. Well, that plate piled high with turkey and trimmings doesn’t only come at the expense of our waistline; it also has somewhat of a carbon footprint, as does the trip back home by car or air. So reporter Lou Blouin of the Allegheny Front has been investigating what exactly is the carbon cost of that Thanksgiving feast.

BLOUIN: Turns out the guy who may know the most about the carbon footprint of an American Thanksgiving, hasn't ever experienced one himself.

BERNERS-LEE: I haven't actually. Although it doesn't look all that dissimilar from our Christmas dinner in the UK.

BLOUIN: This is Mike Berners-Lee, and he's considered one of the world's leading experts on carbon footprint of, well, everything. In fact, he wrote a book subtitled, the "Carbon Footprint of Everything". So earlier this week, I phoned him at his office in the UK to talk a little turkey.

BERNERS-LEE: Yeah, Sure, Ok. Well, turkey is a meat, and most of the time the thing to say about meats is that they’re quite inefficient way of having nutrition. But having said that, chickens and turkeys are very much at the efficient end of the meat spectrum.

BLOUIN: That’s because a Thanksgiving turkey can go from egg to a bird that’s 20 pounds or more in just 14 weeks. So they’re not really on the planet long enough to make that big an impact. And it turns out it doesn't even matter all that much if you go with a local bird, which only has to ship from the farmer down the road.

BERNERS-LEE: Well, it matters a bit, but it would still be fairly small compared to the actual footprint of growing the animal in the first place.

BLOUIN: In fact, Berners-Lee says transportation might only account for about 25 percent of the turkey’s total carbon footprint, assuming it’s not shipping by air. But bottom line—having a turkey on your Thanksgiving table is not all that bad. And the same goes for corn, potatoes, cranberries, pumpkins and a lot of the other foods that end up on your plate. 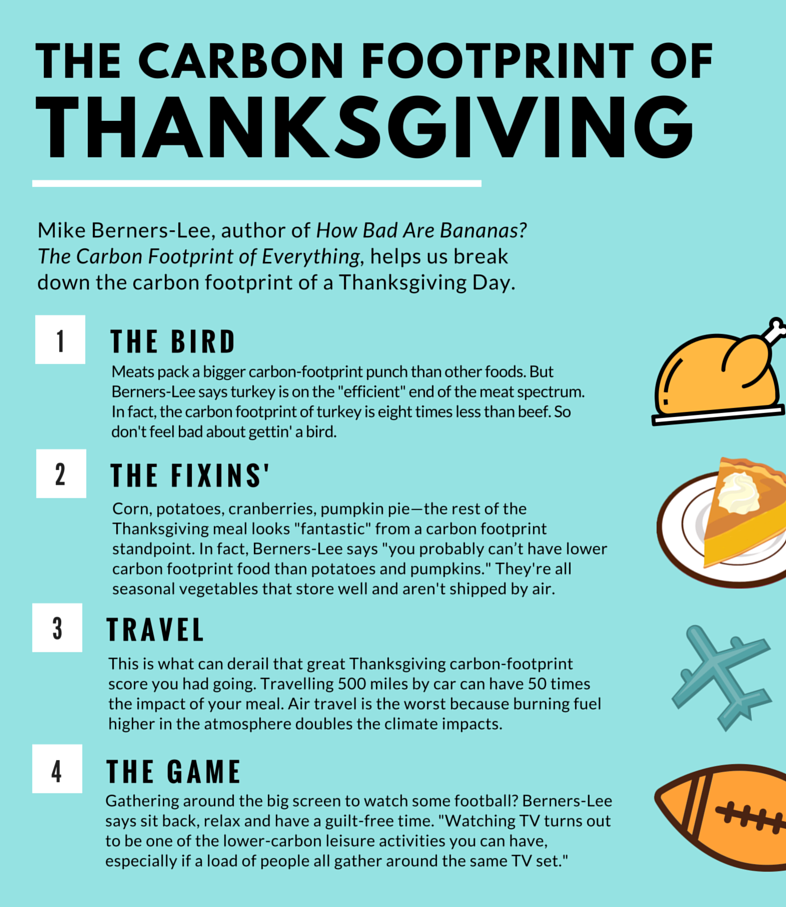 BERNERS-LEE: So, they’re seasonal vegetables, and they keep well. And you don’t have to do anything crazy like put them on an airplane. So they’re fantastic. In fact you probably can’t have lower carbon footprint food than potatoes and pumpkins.
BLOUIN: So all in all, the Thanksgiving dinner looks pretty good from a carbon footprint standpoint. That is, if you go traditional.

KRAUSS: Yeah, so, okay. This year is a little bit different. Little bit of a curveball. But there is no turkey.

BLOUIN: This WESA reporter Margaret Krauss. She agreed to let us dissect the carbon footprint of her Thanksgiving plans, which are still kind of coming together.

BLOUIN: Whatever she decides to cook, it sounds like it’s going to be a bit of a fire drill. The plan is to get on a plane, and on Wednesday night, hit the supermarket to pick up some supplies when she lands.

BLOUIN: So all in all a pretty big trip, and that—along with the alternative menu—could get Margaret into trouble according to Mike Berners-Lee.

BERNERS-LEE: Well yeah, red meats are a quite a lot less efficient. The carbon footprint of beef would be about 24 kilos of carbon dioxide equivalent per kilo of beef, whereas for turkey, it’d be nearer three.

BLOUIN: And the air travel is a real killer.

BERNERS-LEE: So a Boeing 747 will get through—I can’t remember the exact number off the top of my head—but it’s 100 and something tons of fuel per trip. So you end up with an enormous carbon footprint shared out between the passengers. And your friend has to take a few tons of it on the chin.

BLOUIN: Even worse, Berners-Lee says the fact that the fuel is burning higher up in the atmosphere doubles the climate impacts. So drive if you can, better yet, take a train. But how does the carbon footprint of Thanksgiving travel stack up against Thanksgiving meal? Well, Berners-Lee did a quick calculation on my 500-mile trip back to Michigan by car.

BERNERS-LEE: So you’re going through about 50 liters of gas, so that would be the same carbon footprint of turning up and finding your way through 50 kilos of turkey, which would be quite an achievement.

BLOUIN: Yeah; no way that’s happening, even with leftovers. And at my house, my mom has a pretty energy-efficient way for storing those. When the fridge fills up, as long as the Michigan fall weather is cooperating, she puts the turkey in her car too keep it cold. Pretty sure that method is keeping the planet safe from harm. Not sure I can say the same for us. I’m Lou Blouin.


More about food and the environment on The Allegheny Front

How Bad Are Bananas?: The Carbon Footprint of Everything

Beef environment cost 10 times that of other livestock

The tricky truth about food miles