Climate Summit Boosted By Optimism at the Start 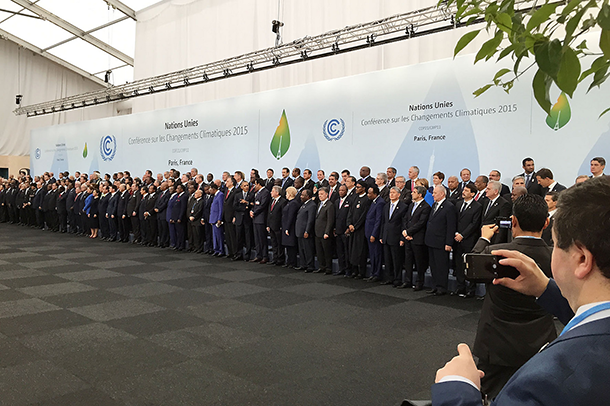 World leaders, heads of state and dignitaries gathered in Paris, France to negotiate strategies for mitigating and adapting to climate change. (Photo: UNclimatechange, Flickr CC BY 2.0)

As the UN climate talks opened in Paris, negotiators were optimistic about reaching an agreement by the end of the December 11th deadline, but questions remain about how strong and ambitious the proposed limits and measures will be. The Prince of Wales, President Obama, and President Christopher Loeak of the Marshall Islands were among the many dignitaries who stressed the urgency of acting swiftly to limit greenhouse gas emissions and adapt to climate change. Host Steve Curwood reports.

CURWOOD: From Paris, France and PRI, this is Living on Earth. I’m Steve Curwood. As the climate summit wraps up its first week of negotiations, one thing is clear. Almost everyone here says there will be a new deal to succeed the Kyoto Protocol in 2020 with new limits on greenhouse gas emissions and new measures to adapt to the coming changes from climate disruption.

But huge questions remain about how strong and ambitious those limits and measures will be as negotiators try to wrap things up by a December 11th deadline. The mood here in Paris is in sharp contrast to earlier summits that have mostly stalled since the creation of the Kyoto Protocol in 1997. And the clearest signal that this time is different came when an unprecedented number of about 150 heads of state and government arrived on November 30th, at the beginning of this 21st conference of the parties to the UN Framework Convention on Climate Change, otherwise known as COP21. Urgency was in the air as Prince Charles of Britain opened a day of speeches from all the leaders present and in many respects he spoke for all.

PRINCE CHARLES: Ladies and Gentlemen, rarely in human history have so many people around the world placed their trust in so few. Your deliberations over the next two weeks will decide the fate, not only of those alive today, but also of generations yet unborn. So I can only urge you to think of your grandchildren as I think of mine, and of those billions of people without a voice, those for whom hope is the rarest of sensations, those for whom a secure life is a distant prospect. 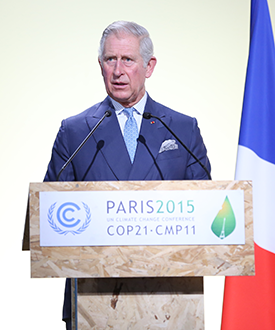 In damaging our climate we become the architects of our own destruction. While the planet can survive the scorching of the earth and the rising of the waters, the human race cannot. The absurd thing is that we know exactly what needs to be done; we know we cannot adapt sufficiently to go on as we are, nor can we build ourselves a new atmosphere. To avoid catastrophe we must restrict climate change to less than two degrees, which requires a dramatic reduction in carbon emissions.

CURWOOD: That same sense of weight and urgency was echoed as the other leaders followed Prince Charles. US President Barack Obama pointed to the burning tundra, melting glaciers and villages slipping into the seas that he observed in Alaska as reasons why he believes countries will act together now to make these negotiations a success.

OBAMA: Nearly 200 nations have assembled here this week, a declaration that for all the challenges we face, the growing threat of climate change could define the contours of this century more dramatically than any other. And what should give us hope, that this is a turning point, that this is the moment we finally determined we would save our planet, is the fact that our nations share a sense of urgency about this challenge and a growing realization that it is within our power to do something about it. 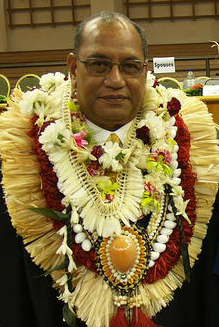 CURWOOD: Russian President Vladimir Putin called for a comprehensive, effective and equitable agreement. Chinese President Xi Jinping spoke of the need for a comprehensive, balanced, ambitious and binding agreement. The official host of COP21 is French President Francois Hollande, and as he thanked the world for support in the wake of the recent murderous attacks on the streets of Paris, he also noted that this crucial summit is about the future of life itself. The children of world need to be free from more than terrorism, Hollande said, they must also be free to live on an unspoiled planet. And then President Christopher Loeak of the Marshall Islands brought the global challenge of climate disruption down to the very personal.

LOEAK: I address you today not only as a president, but as a father, as a grandfather, as a custodian of my culture, and as a representative of a nation that lies just two meters above sea level and risks being submerged by the rising waves. Everything I know and everyone I love is in the hands of all of us gathered here today. The climate we know over many centuries has changed dramatically before our very eyes. We are already limping from climate disaster to climate disaster, and we know there is worse to come. For us, COP21 must be a turning point in history and one that give us hope.

The Marshall Islands Are Disappearing

Fanfare Over, Paris Climate Talks Shift to Back Rooms and Brackets

PM Modi's speech at the inauguration of India Pavilion at COP21 Summit'15 in Paris, France

Photos from the UNFCCC COP21