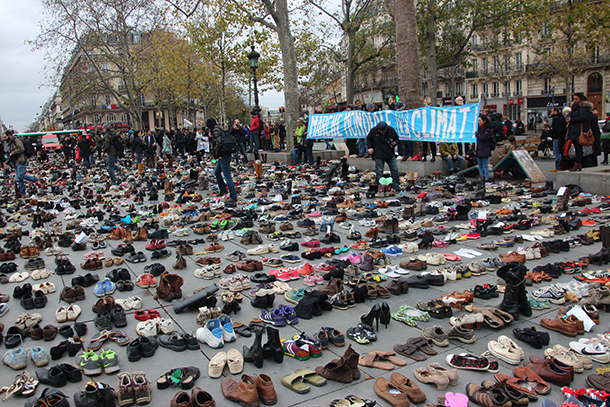 Banned from carrying out a march in Paris, climate activists placed thousands of shoes in the center of the Place de la Republique in symbolic protest. (Photo: Takver, Flickr CC BY-SA 2.0)

The French government cancelled all major protests in the wake of last months’ attacks in Paris, but that hasn’t stopped the climate justice movement from making itself heard and its presence felt. Living on Earth’s Emmett FitzGerald reports from the streets of Paris.

CURWOOD: It’s Living on Earth, I'm Steve Curwood in Paris. As the climate summit was getting underway, millions of people around the world rallied in support of action, but the crowds were much smaller here, where the deadly terrorist attacks two weeks earlier prompted a strong show of armed police on the streets and a ban on demonstrations. Many of those who took to the streets in Paris said they see climate justice as a human right, and the economic emphasis of negotiations puts profits ahead of people. Living on Earth’s Emmett Fitzgerald has our story.

FITZGERALD: Here in Paris, indigenous activists marked the day before the climate summit kicked off with a moment of healing outside the Bataclan Theater, where 89 people lost their lives last month. 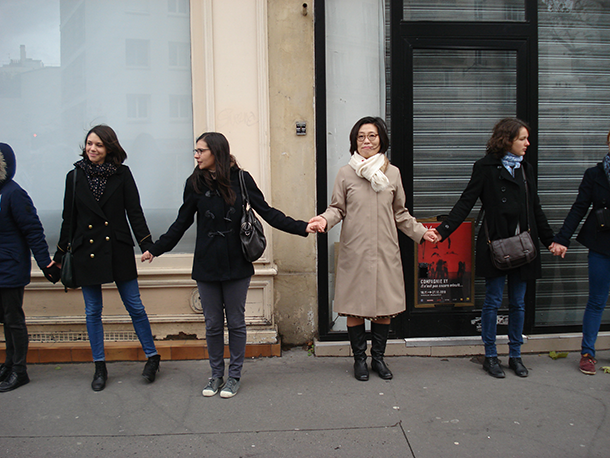 Nearly 5,000 activists formed a human chain along the route of the cancelled march. (Photo: Joshua Rifkin)

FITZGERALD: That’s Dallas Goldtooth, an environmental activist from the Indigenous Environmental Network. He says that native people have something unique to offer during tragic times like these.

GOLDTOOTH: As indigenous peoples, we are well aware of tragedy. It’s a part of our experience and so we want to acknowledge that moment in this space right here, and bring our positive energy and to bring a path forward of sorts.

FITZGERALD: The attacks prompted the French government to prohibit all major protests during the UN summit, a decision some climate activists thought was wrong. 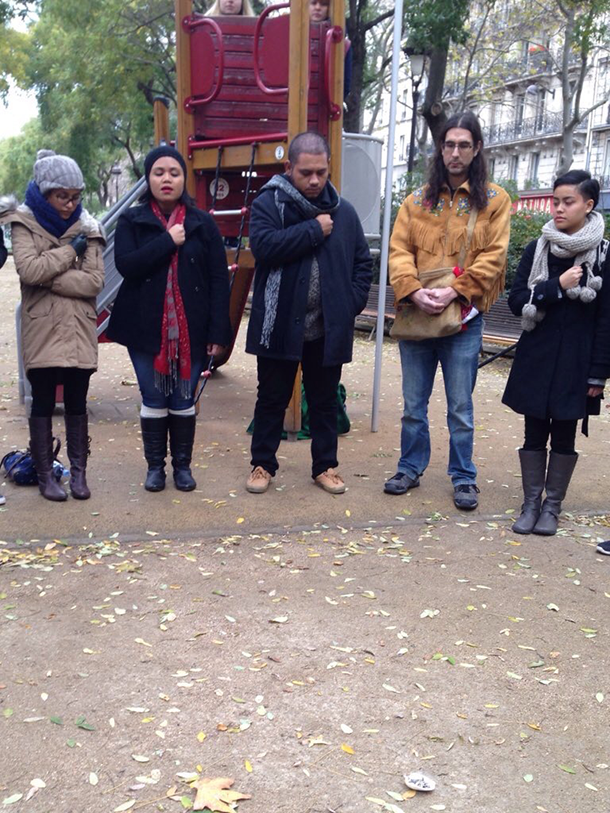 Indigenous activists, including youth from the Marshall Islands, conduct a moment of healing outside the Bataclan Theater. (Photo: Emmett FitzGerald)

WEISNER: I think that the state of France is making a huge error in terms of cancelling the marches.

FITZGERALD: Cindy Weisner is the head of the Grassroots Global Justice Alliance.

WEISNER: We see the hypocrisy of them allowing Christmas markets to continue, allowing football matches to continue. And I think that the response that would have honored the people that were killed, and the proper way to mourn folks, is to be able to say we’re not afraid, we’re here.

FITZGERALD: With the major climate justice march in Paris cancelled, activists turned to symbolic protest. They placed thousands of shoes, including a pair from Pope Francis, in the center of the Place de la Republique to show the breadth of support for strong action on climate change and a commitment to human rights. And nearly 5,000 protesters defied the ban altogether, forming a human chain that stretched through the city along the planned march route—the two mile length of Boulevard Voltaire. Activists from all over the world linked arms, including many young people.

MUDZONGO: My name is Wadzanai Mudzongo and I’m from Zimbabwe. In Zimbabwe we’re experience floods and droughts, which are affecting agriculture, which used to be our breadbasket, so it’s leading to hunger and poverty.

FITZGERALD: Wadzanai says she was disappointed that the march was cancelled, but she’s happy to see so many people in the streets today.

MUDZONGO: It’s quite a good feeling because we are out here in solidarity together. People from around the world, from Africa, from Europe. And we are all here to push one agenda. One goal.

FITZGERALD: And what is that goal?

MUDZONGO: We’re fighting to end climate change and to have climate justice.

FITZGERALD: They’re making it pretty clear what you want.

FITZGERALD: There was a lot of energy on the streets of Paris, but not much excitement about what’s going on inside the negotiating rooms at the UN Summit. Among the groups forming the chain was the Women’s Earth and Climate Action Network. Osprey Orielle Lake is Executive Director, and she says she’s glad that countries are beginning to take climate change seriously, but that the national commitments on the table in Paris don’t go nearly far enough.

FITZGERALD: And that’s a life and death concern for people on the frontlines of climate change. Allison Warden is an artist, activist, and member of the Iñupiaq tribe in the Arctic National Wildlife Refuge in Northern Alaska.

WARDEN: The effects of climate are felt most acutely in the arctic. We are the ones who are paying the price most severely. And see the changes the most.

FITZGERALD: Allison says that to protect the most vulnerable people, negotiators need to ensure that a lot of the world’s fossil fuel reserves never get burned. 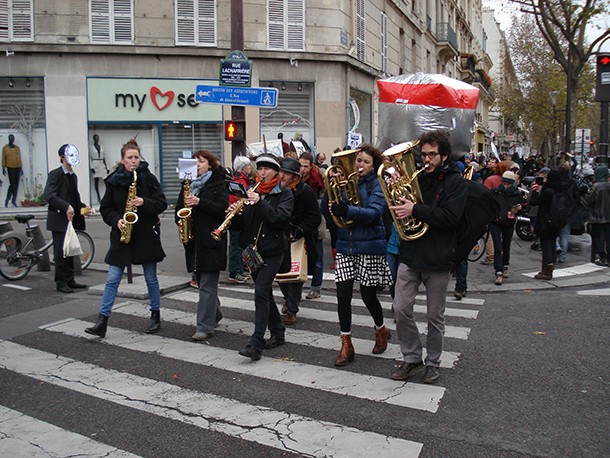 WARDEN: We are in an awkward time in the state of humanity. But also a very exciting one. The fossil fuel era is not sustainable. And I’m saying that as a person who sits on land that has supposedly millions of barrels underneath our land. But I want to keep it in the ground, because we cannot afford to burn that carbon.

FITZGERALD: Cindy Weisner of the Grassroots Global Justice Alliance has been following the climate negotiations for the past 21 years with frustration, not only with the lack of a meaningful deal, but with the type of solutions that are on the table.

WEISNER: And I think that if we’re really looking at resolving the issue of the climate crisis, it’s not going to be based on carbon markets, it has to be very radical in terms of real commitments to reducing mandatory emissions. It’s about keeping oil in the soil, it’s about a transition that’s going to prioritize the people directly impacted, and so those are the kind of things that we’re putting forward.

FITZGERALD: Many of the climate activists in the streets of Paris want to see enforceable commitments on emissions reductions, and they don’t want carbon trading schemes. But Ananda Lee Tan of the Climate Justice Alliance says that’s unlikely, because the people at the negotiating table are beholden to powerful corporate and national interests.

TAN: What I would call the pollution profiteers are at the table, and the voices that are really demanding systems change, rather than climate change, are outside in the streets. 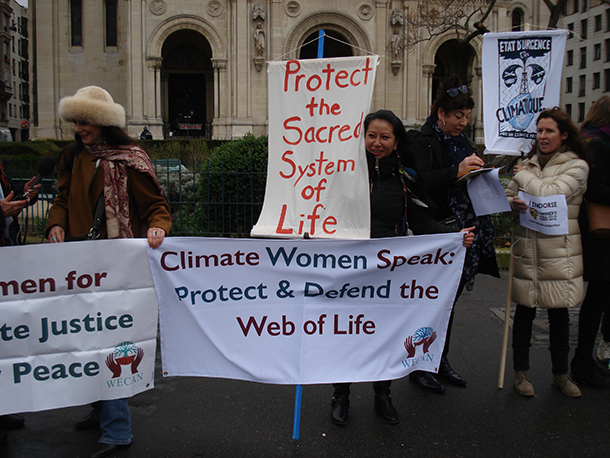 FITZGERALD: Ananda says that if we really want to solve the climate crisis, we need to make our entire economy and energy system truly local.

FITZGERALD: And Cindy Weisner agrees that if we want to solve a problem as big as the climate crisis, we need a just transition, not only from fossil fuels to renewable energy, but from corporate power to people power.

WEISNER: A just transition that really begins to build local living economies in communities, where we can begin to talk about energy democracy, zero waste, different solutions that are actually going to cool the planet.

FITZGERALD: The peaceful protest took a turn as hundreds of police in riot gear surrounded a group of more confrontational, anti-capitalist protesters in the Place de la Republique. 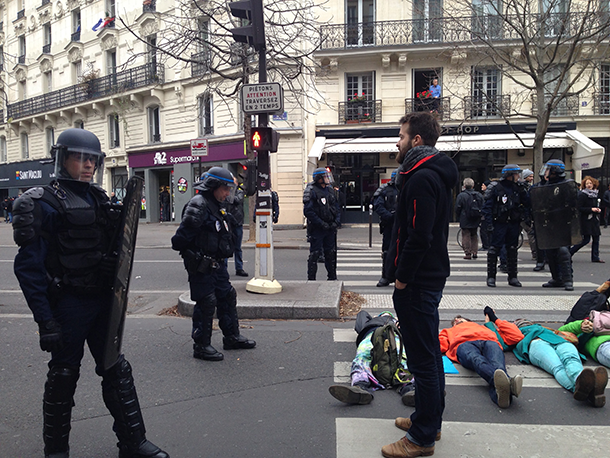 Protesters in a standoff with French police near the Place de la République in Paris (Photo: Emmett FitzGerald)

FITZGERALD: Police fired tear gas canisters into the crowd and soon the square was filled with a noxious haze. Reports have differed about what sparked the change, but a climate activist who would only give her first name, Sheila, says the police response was unwarranted.

FITZGERALD: After the attacks, French police used state of emergency laws to put several climate activists under house arrest. Sheila says it’s all part of an effort to quash opposition to the conference.

SHEILA: It’s not about safety, it’s about not allowing people to stand up for what they believe in, and to speak out against the COP21.

FITZGERALD: To keep global warming beneath two degrees Celsius, Sheila says we need to fundamentally change the economic system, but that’s not a message that authorities in Paris want to hear.

FITZGERALD: The climate justice movement has found ways to make itself heard during the opening week of COP21, and it isn’t about to stop now. For Living on Earth, this is Emmett FitzGerald in Paris.


Pictures from the international day of action

Police Clash with Protesters in Paris

The Powerful Message Behind These Shoes

More about climate change and COP21

The big climate march is off in Paris, but still on in a city near you