How Will the World Address Loss and Damage From Climate Disruption? 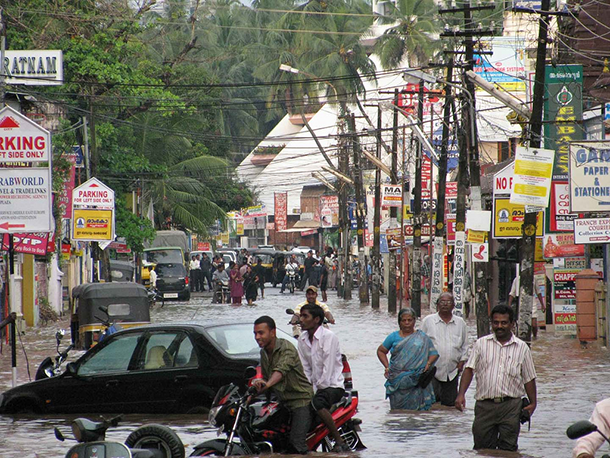 Thampanoor the transport hub of Trivandrum, capital city of Kerala in India during the monsoon season. Climate vulnerable countries like India are looking for loss and damage agreements out of the COP21 talks to help with adaptation and mitigation of climate change effects. (Photo: indiawaterportal.org; Flickr CC BY-NC-SA 2.0)

Some effects of global warming are becoming more intense, such as more intense storms, droughts, land-loss due to rising seas, and displacement of communities. Host Steve Curwood speaks with Erica Bower, lead loss and damage campaigner with the youth group SustainUs, about emerging discussions at COP21 concerning those most affected by climate change and how to address their needs.

CURWOOD: Along with mapping a path to a carbon-free future and adapting to the changing climate, a third branch of negotiations has emerged in recent COPs and come to a head here in Paris. It is the question of loss and damage, or what should be done when people are permanently displaced by rising seas or other effects of climate disruption.

Right now those driven out by climate change are not recognized as refugees, and no agency helps sort out what happens when neighborhoods or regions or even whole nations disappear. Erica Bower is the lead loss and damage campaigner with the American youth group SustainUS.

BOWER: Climate displacement is a reality that is here and now. It's not over there in the future. It is something that is on the present, even in countries like United States. The internal displacement monitoring center cites that 26 million people are displaced annually by disasters, and this is the status since 2008, but it's only likely to become increased every single year with climate change impacts. Even in our own backyards in New Jersey, over 39,000 people who were displaced by Hurricane Sandy are without homes over three years after the disaster, and in particular these are portions of the population that are marginalized already — lowest socioeconomic status as well as communities of color — and climate change and climate displacement serves to exacerbate those pre-existing qualities.

CURWOOD: Who should pay for climate displacement?

CURWOOD: In New Jersey, almost 40,000 people homeless as a result of what happened with superstorm Sandy, who should pay for them to get them homes?

CURWOOD: So, there are a number of small island states, places from Kiribati, Mauritius, all these places close to sea level soon to be under the sea. Who should pay?

BOWER: I believe that the international community including the states present at the UNFCCC should provide compensation and what they're calling now "innovative finance". The word “compensation” is a huge no-no at the moment in terms of its polarizing effect on negotiations. Innovative finance and insurance mechanisms to ensure that these countries are able to return to homes is one option. Loss and damage mechanism also includes the need for technical support, for instance, early warning systems, disaster risk reduction measures. This kind of climate displacement coordination facility that I mentioned earlier, which could serve as a storing house for best practices and enable countries to learn how to respond to these challenges.

CURWOOD: So, just to be clear, you're not talking about loss and damage totaling up what some rich country like the United States has done in terms of carbon pollution and saying they have to pay compensation for this pollution to these people.

BOWER: No, I believe loss and damage is about more than just that. I believe that it has evolved over the course of these negotiations and has take on a character of its own, and now loss and damage includes the need for technical support.

CURWOOD: It sounds like it does include this notion that certain nations did some polluting which caused damage to others.

BOWER: So the polluter pays principle, which I believe you're referencing, is certainly an intrinsic part of what loss and damage is in the UNFCCC context. Nations like United States have a responsibility because of historic commissions to compensate the countries that are most vulnerable to climate change. I don't believe it's politically palatable at the moment.

CURWOOD: What are your hopes for what can actually come out of these negotiations?

BOWER: At the very minimum, I hope that there is a loss and damage mechanism that is an article of the UNFCCC final decision text. It is particularly crucial for this climate displacement to be recognized in this text, because this text sets the agenda for the next 50 years. And if this issue has a hook in the text now, that means that funding as well as program support and technical support will come in the years ahead.

CURWOOD: If not now.

BOWER: If not now. Also, as a young person — and SustainUS is a youth organization — I believe that loss and damage is an issue that we are inheriting, it is our future and it is vital that this text recognize generational inequity and the needs of future generations, and in order to do that they need to have a strong mechanism of loss and damage, that begins today.

CURWOOD: Erica Bower with SustainUS. Thanks so much for taking this time with me today.

BOWER: Thank you so much.

At COP21, a Frantic Debate Over Climate Aid, and Some Hopeful News About Climate Insurance

UNHCR: the UN Refugee Agency on climate change and refugees

Podcast: Why is loss and damage a hot issue at COP21?

How Climate Change is Behind the Surge of Migrants to Europe

What Happens When Your Country Drowns?

What is the 'polluter pays' principle?