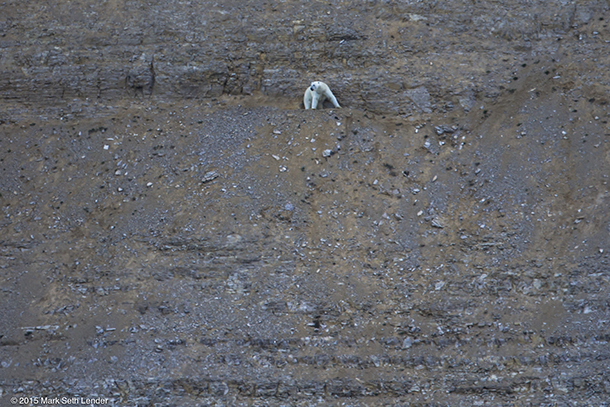 Murre nest high up on rocky cliffs in the lower arctic region. Polar bears often climb in search of them for food. (Photo: Mark Seth Lender)

Up in the arctic north of Canada’s Akpatok Island, a large, male polar bear climbs crags in search of murre fledglings, but instead finds a plane full of sightseers rounding the bluff, surprising each other. Writer Mark Seth Lender reports from the Qikiqtaaluk Region of Nunavut, Canada.

CURWOOD: And we stay with bears for this next story. This time, it’s a different bear, of a color as different as night and day. We’re up in the north of Canada, in Hudson Strait on the island of Akpatok, noted for its polar bears, as well as its precipitous 700 foot high limestone cliffs where the thick-billed murre nest. They’re a species of auk with stubby penguin-like wings whose nests lure the great white bears who also live there. But as writer Mark Seth Lender observed, sometimes the bears seem to contemplate other potential sources of nourishment.

LENDER: He is big and white and perfect. That kind of polar bear a certain kind of hunter wants to see, mounted on a wall. All things being equal, you can be certain, Bear’s the one bringing all the trophies home.

Two weeks and the fledgling thick-billed murre will begin to fall from their hard rock nests on Akpatok, in the sheer limestone wall. Unable to fly, they will tumble five, six, seven hundred feet straight down, aiming for water. Lucky for the ones who make it. The others? Manna in Feathers (that’s what Bear is waiting for).

Hudson Strait and Akpatok Island is one of the uninhabited Canadian Arctic islands in the Qikiqtaaluk Region of Nunavut, Canada. (Photo: Mark Seth Lender)

And Bear no doubt is tired of waiting.

Up he goes walking the loose detritus of the talus mound, the slope steep as an avalanche though to Bear with his wide gripping feet the incline might as well be level ground. A hundred yards high, Bear sits down.

He looks about as if he’s enjoying the view. Though there is no view. Only the blank face of an ocean just as well admired from below. And with nothing to eat there is nothing for Bear to do. No reason for the climb, the calories burned, this particular place. No apparent cause for Bear’s demeanor, and that lolling lazy look on his face.

The Plane curls around the corner in close, wing high not more than thirty meters between the vertical of the cliff and the fuselage. Looking for polar bear but entering the space from the wrong side: They had no way of knowing Bear, was there.

Yet there he is. Right altitude right attitude to look, straight, into the little windows like seal holes in the ice, and the funny chewy little faces pressed against the Plexiglass. Nice. Very nice. 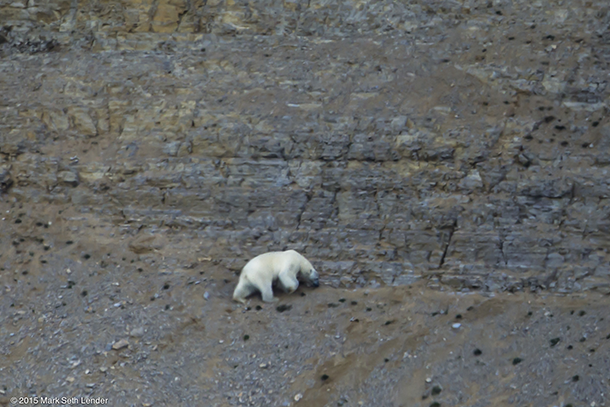 The murre are not there, but bear climbs anyway. (Photo: Mark Seth Lender)

And the Rolls Royce engines hit the red line with a growl that even a polar bear cannot match and the airplane levels out again and vanishes at a couple of three hundred knots.

Bear does not run, though I’ve seen bigger ones than him take off like a shot with far less provocation. Instead, Bear lies down, his chin resting on those huge white paws like some guy stretched out on the couch.

Late in the afternoon the same plane makes another pass. Same approach. Same altitude. Same distance off the cliff.

Bear is not there.

There are no polar bears at all.

And I wonder, as they disappear into the clouds, all those paying customers and all the money they just spent, really: Who’s the entertainment?

CURWOOD: Writer Mark Seth Lender – and there are photos of both these close encounters of the ursine kind at our website LOE.org.


More about the common murre

Akpatok Island is one of the uninhabited Canadian Arctic islands