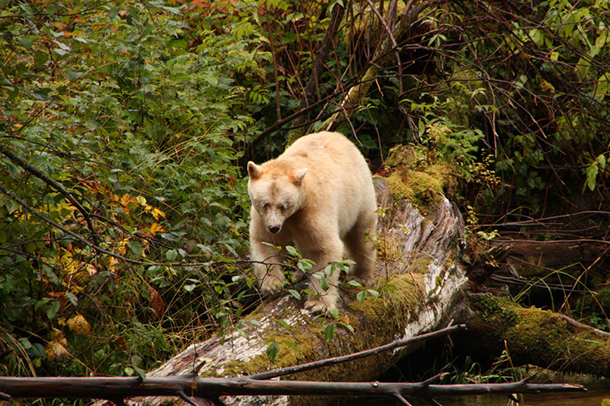 Eighty-five percent of the Great Bear Rainforest in British Columbia is now protected from logging, after decades of negotiations among environmental activists, the timber industry, First Nations, and the BC government. Temperate rainforests are one of the most rare ecosystems on Earth.Host Steve Curwood discusses how these groups came together with reporter Andrew MacLeod of the magazine The Tyee, who explains what’s been protected and what’s open for logging.

CURWOOD: From the Jennifer and Ted Stanley studios at the University of Massachusetts Boston and PRI, this is Living on Earth. I’m Steve Curwood. Today’s program is full of good news and visions and dreams of the future, and we start with a deal to preserve a huge swath of rare coastal rainforest. Temperate rainforests make up less than one percent of the world’s forests, and the biggest stretch is along the North Pacific coast from Southern Alaska to northern California. And now after years of negotiations, 85 percent of the Great Bear Rainforest along the coast of British Columbia will be protected, with just 15 percent open for logging. It’s wild and wet there, with giant trees, grizzly bears, gray wolves, salmon, and even the rare and revered white Spirit bear. Industry, First Nations, government and conservationists came together to forge this agreement, and to understand how, we called up Andrew MacLeod, a reporter with the Vancouver-based magazine the Tyee. Andrew, welcome to Living on Earth.

MACLEOD: Thank you for having me on.

CURWOOD: I have to ask you about your magazine name, the Tyee.

MACLEOD: Yeah, so it's kind of salmon. We were set up as an alternative to the mainstream media more than 10 years ago, and the idea is sort of a swimming against the current kind of image.

CURWOOD: But not endangered as so many salmon are.

MACLEOD: No, perhaps under threat but no.

CURWOOD: [LAUGHS] So tell me about the Great Bear Rainforest in British Columbia. What's it like to be among the trees and wildlife? 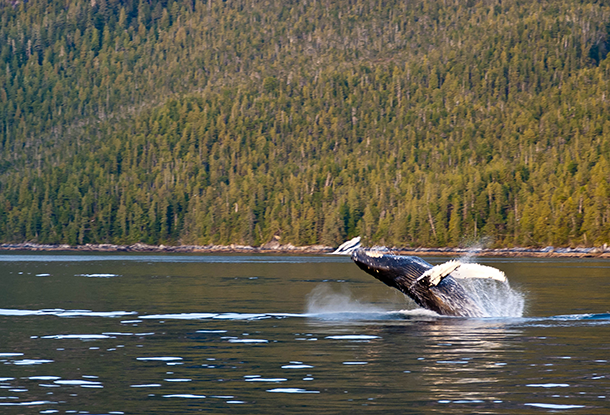 MACLEOD: The Great Bear Rainforest, it used be known as the mid-coast timber supply and environmentalists renamed it around 1997 the Great Bear Rainforest and it was the start a campaign to save it. It's an area of 6.5 million hectares between the top end of Vancouver Island and the Alaska Panhandle. So it's an area, about the size of Ireland, and it's quite remote. There are only about 1,400 people who live there. So much of it has never been logged. This is usually described as the largest intact temperate rainforest in the world, very lush, mossy, moist year-round ecosystem. They get something like a meter and a half of rain a year on the coast so big, big trees, Cedars and Firs and Spruce and such.

CURWOOD: And when you say big, big trees, how big are these big trees?

MACLEOD: Yeah, we're talking trees that five or six people put their arms around. Some of these Cedars can be in 20 feet in diameter, that kind of thing. They are big, big trees.

CURWOOD: Andrew tell me what is the Spirit bear?

MCLEOD: They are a subspecies of Black bear. They are a genetic variant that comes out white, so it's a white black bear. There are also Grizzly bears there, there are whales, wolves, and just relatively pristine ecosystem up there.

CURWOOD: And who calls them Spirit bears? Is this a First Nations thing? Is this something that environmental activists had cooked up? What is it? 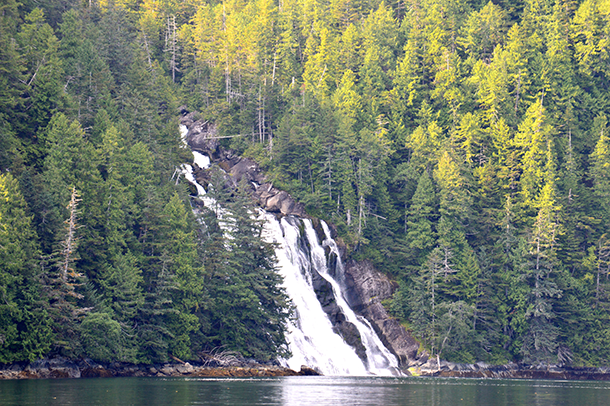 MACLEOD: My understanding is that it goes back through the First Nations, there have always been these genetic variant bears there and they're seen as special for sure.

CURWOOD: So what does protecting 85 percent of this forest really mean? What's permitted in the 15 percent that's going to be logged?

MACLEOD: I mean, the way they describe that is working forests, so it's sort of open for logging, same kinds of standards as the rest of the province. The forest industry will tell you that that means protecting viewscapes, it means protecting old-growth, it means protecting habitat for species at risk. In this case, it will mean protecting bear dens. Critics will tell you that the logging industry always says that kind of thing and you know, it will be destructive, damaging to the ecosystem, but on the other hand, the trade-off is that something like 85 percent of the remaining forest is being protected there, so it's a balance. 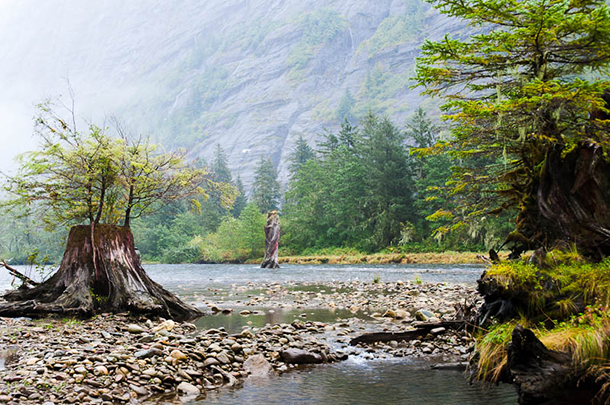 CURWOOD: Andrew, what role did the science of ecosystem-based management have in making this plan do you think?

MACLEOD: I mean, that's been part of the talking points from the start was that they were going to apply ecosystem-based management across entire the land-base. Often in BC we're something like 14 percent covered by parks, but a lot of times the parks that they make are the tops of the mountains, it's the rock, it's the ice, it's the places where there isn't a lot of commercial activity, so the idea is that what's protected will be representative of the different ecosystems that are present in the rainforest. Things right down on the coast, the valley bottoms, which is where the big trees grow.

CURWOOD: So how did this agreement come together? Talk to me about the different roadblocks involved in making this work? What, you have industry, you have environmental activists, you have First Nations, the Native American population we would say in the United States, and the government. When we did earlier work on Clayoquet Sound, we understood that the BC government was part of the logging industry and it has an interest in it.

MACLEOD: In the Great Bear as well, BC timber sales is a government company and they are one of the license holders up there. BC is very politically divided. There are a lot of people who working in resource industries who you are all for logging and paving it, and the government for the most part over the history of the province has been involved in encouraging that. And there a lot of people who are here because it's beautiful, right, people who don't directly depend on resource jobs, but are here because they like the place, and there's a very strong and very healthy and environmental movement. I mean, this is the birthplace of Greenpeace, David Suzuki and the Suzuki Foundation are here, Sierra Club is strong, a group called Forest Ethics are involved as well.

There've been fights in BC over land use going back 30 or 40 years. A lot of those fights were sort of valley by valley. Environmentalists sat down and said, well, what's the next big battle and how do we fight in a way that makes sense? And they started a markets campaign, so there are the five main forest companies that hold licenses up there, and they went to their customers and said well, basically, we'll make it uncomfortable for you if you want to take trees from here and then turn them into the toilet paper and books and such. We'll make it clear where they're coming from and what the destruction is like on the land, and so the forest companies had to sit down with them, and there was an initial agreement that was heavily towards protection. First Nations were involved in that as well. They went back to their communities and a lot of the reaction they got was wait a second, we need jobs here as well. They weren't necessarily all for protecting everything, so yeah, we've been looking at 20 years of discussion, 10 years of serious negotiation and involving all kinds parties - 26 First Nations, five logging companies, three environmental groups, provincial government, some local governments. The idea is that they have come to some kind of a balance that everyone can live with.

CURWOOD: Before you go, Andrew, tell me what do you think was the secret sauce that got everybody together at this time? Long-standing conflict, a lot of discussion, finally, a deal. 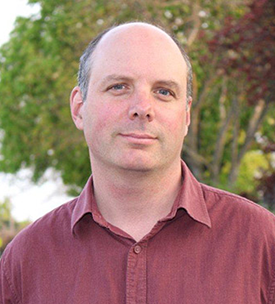 MACLEOD: Going back to when it started, I think it was that threat of the markets campaign. Clayoquet Sound, there were something like 700 people arrested there, there were trials, and it gave forest products from British Columbia a bad name. We were the Brazil of the north. I think the logging companies didn't want to go through that again, and then adding to that, First Nations here have seen their rights, we have a history where the powers in Europe sat down and divided up North America, and BC was property of the queen and all that, but there were lots and lots of people already living here. Lots of First Nations people will tell you they've been on the land for thousands and thousands and thousands of years and it's been sustainable, it's been healthy, that it's really only last 150 years of colonialism where you've seen clear-cuts and destruction and species driven to extinction. On the other hand, there are lots of people from First Nations who are working in the logging industry today as well. Over time, First Nations have sort of reestablished their rights. There have been some precedent-setting cases just in the last few years that have recognized aboriginal title does exist. The first sort of iteration of those court rulings was that First Nations people had to be consulted. The government can't just circle parts on a map and say, yeah, that's open for logging any more.

CURWOOD: Andrew MacLeod writes for The Tyee and lives in Victoria, British Columbia. Thanks so much for taking the time today, Andrew.

MACLEOD: Thank you for having me on and thanks for your interest.

Ecosystem based management in the Great Bear Rainforest

About the Spirit or Kermode Bear

VIDEO: Last Stand of the Great Bear from National Geographic