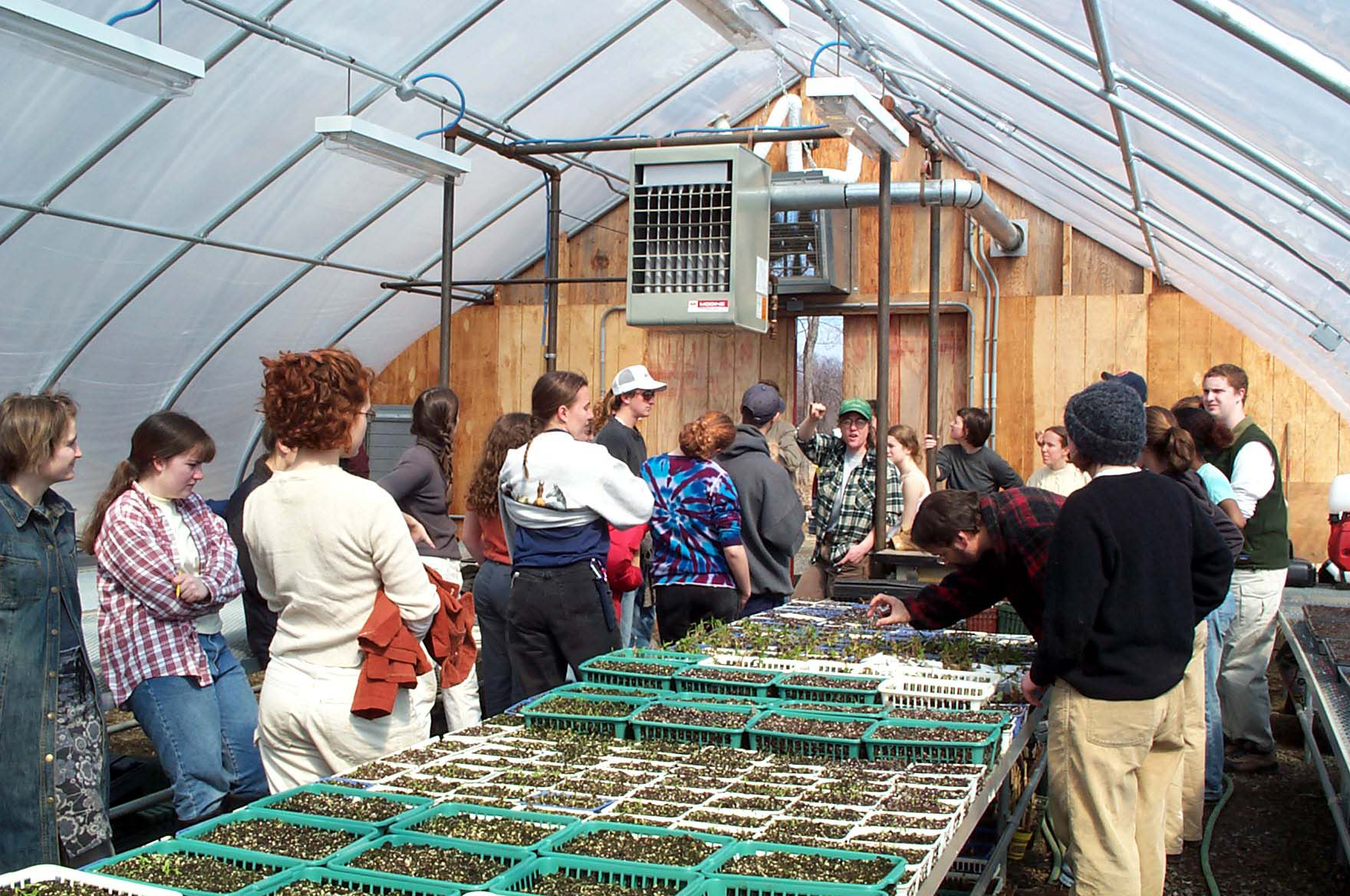 Hampshire already had a reputation for being “green.” Now, the small liberal arts college is working to get 100% of its power from solar energy. (Photo: Jared and Corin, Flickr CC BY-SA 2.0)

In this week’s trip beyond the headlines, Peter Dykstra and host Steve Curwood talk about a college committing to 100 percent solar power and an effort to open up buried streams in Detroit, Michigan. Also, they remember a 1950s television personality who vividly predicted the impacts of climate change and sea-level rise.

CURWOOD: We’ll head beyond the headlines now with Peter Dykstra. Peter’s with the DailyClimate.org, and Environmental Health News – that’s EHN.org and joins us on the line from Conyers, Georgia. Hey, Peter, what’s on deck this week?

DYKSTRA: Hi, Steve. Some news from a small liberal arts school. Hampshire College in Massachusetts has pledged to become the first residential college to power itself with 100 percent solar energy.

CURWOOD: Yeah, it’s a non-traditional school, and as I understand it their football team has never lost a game since Hampshire College opened in 1970.

DYKSTRA: Yeah, that’s cause they don’t have a football team! You know down here in the south, that almost makes you not a college.

DYKSTRA: They have a campus-wide sustainability initiative where they’ve cut water use, they’ve let the grass grow—they have meadows instead of mowed lawns, LED lighting and they’re planning to install thousands of solar panels. 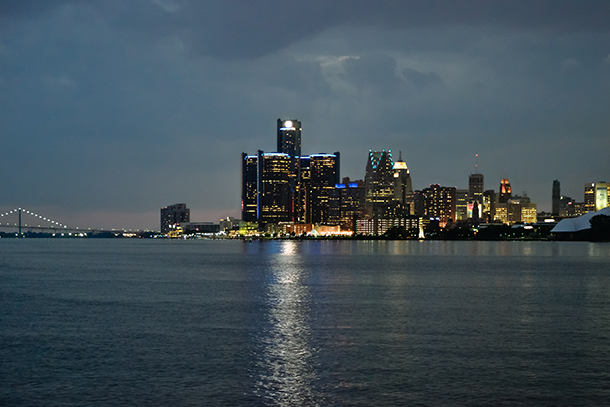 The City of Detroit is hoping to open up streams that had been covered over by concrete years ago. (Photo: Mike Fritcher, Flickr CC BY-NC 2.0)

CURWOOD: How soon is this going to happen? What do they reckon it will cost and or save them?

DYKSTRA: It’ll take several years and one report put the price tag for all this at $11 million. They also have a lot of contributions from sustainability-minded businesses. There’s no really firm figure on what the system will ultimately save the school and its tuition paying students and parents.

CURWOOD: And how much is that tuition?

DYKSTRA: Well, the school’s website lists tuition, room and board at just over $60,000 a year.

CURWOOD: It’ll take a lot of solar cells to offset that.

(CLARIFICATION: After this segment was recorded Hampshire College contacted us to say they thought we had misrepresented their environmental initiatives by not mentioning their new campus center, constructed to the greenest building standards in the world, and that using 100% solar energy to power the school would save $340,000 each year.)

DYKSTRA: A different water story from a different city in Michigan than the one we’ve been hearing about. It’s from my EHN colleague Brian Bienkowski.

There are 310 miles of streams in the city of Detroit have been buried – nearly every natural waterway in the city over the last century. It’s a system that never worked right, and engineers are trying to figure out ways to bring those streams back.

CURWOOD: But there’s no illusion that you’re actually going back to nature here?

DYKSTRA: No, it’s not back to nature for an inner city, but part of the way back is a big improvement. 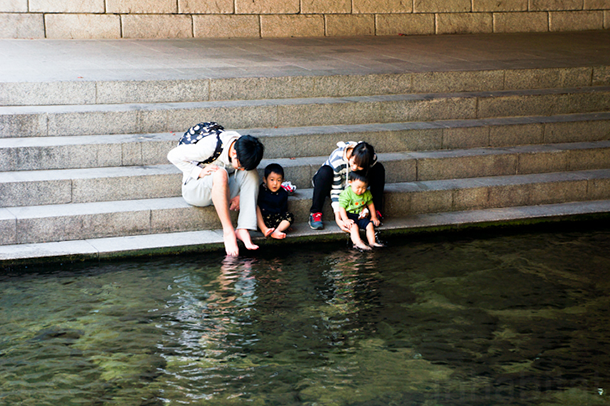 A stream that has been “daylit” in Seoul, South Korea (Photo: Inhabitat, Flickr CC BY-NC-ND 2.0)

CURWOOD: Hmmm. Hey what do you have for us from the history calendar this week?

DYKSTRA: I have Dr. Frank Baxter. He’s a really fascinating guy from the 1950s, and like some politicians today who are fond of saying when they’re trying to duck a climate change question, Frank Baxter was Not A Scientist. But there’s a book, called Sonnets and Sunspots by Eric Niderost, recounting how this English Lit professor became “Doctor Research” in a series of 8 highly-produced 1950’s science documentaries on things like genetics, the human senses, the blood system, and more.
Four of the documentaries were directed by Hollywood legend Frank Capra. They lost money, but they drew millions of network TV viewers and played for a generation of school kids in classrooms.

DYKSTRA: Right, like Bill Nye but to a bigger, wider audience. The most remarkable thing: about Dr. Frank Baxter, he foretold climate change concerns nearly 59 years ago this week:

Here’s what he said, ”Man may be unwittingly changing…"

BAXTER: Man may be unwittingly changing the world's climate through the waste products of his civilization. Due to our release through factories and automobiles every year of more than 6 billion tons of carbon dioxide, which helps air absorb heat from the sun, our atmosphere seems to be getting warmer.

MAN: This is bad?

BAXTER: Well it’s been calculated a few degrees rise in the Earth’s temperature would melt the polar icecaps.

[DRAMATIC MUSIC ON THE FILM, SOUNDS OF CRASHING ICE] 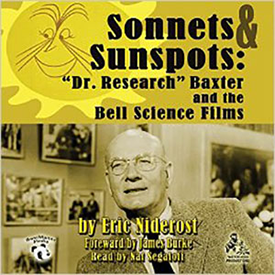 In many ways, “Dr. Research” was a 1950s version of Bill Nye, helping to educate the general public about science. (Photo: Bear Manor Media)

BAXTER: And if this happens, an inland sea would fill a good portion of the Mississippi valley, tourists in glass-bottomed boats would be viewing the drowned towers of Miami through 150 feet of tropical water.

CURWOOD: Wow, Frank Baxter was really prescient. I mean if the ice sheet over Antarctica melts it would raise the oceans almost 200 feet!

DYKSTRA: That’s right and to me the moral of the story is this: we need more Frank Baxters if we want more science literacy in our country today.

CURWOOD: Indeed. Peter Dykstra is with Environmental Health News, that’s EHN.org and the DailyClimate.org. Thanks Peter, talk to you again soon.

DYKSTRA: OK, Steve, thanks a lot, we’ll talk to you soon.

Detroit to Open Up its Streams

More on “Daylighting” Streams in Cities