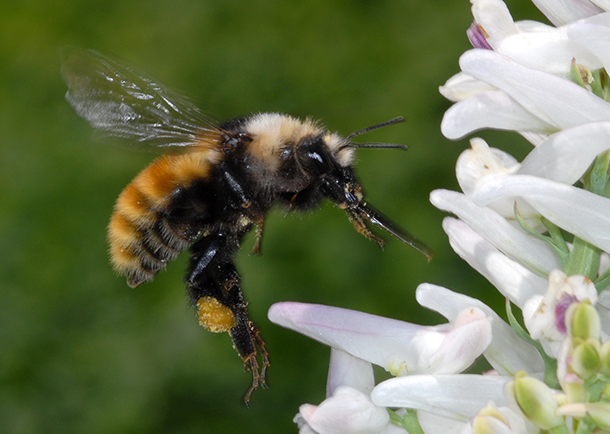 One out of every three bites of our food comes to us thanks to pollinators like bees, butterflies, and birds. But a new UN-sponsored report details the threats that pollinators are facing around the world, from pesticides to habitat destruction. One of the authors David Inouye, a biology professor from the University of Maryland, discusses the findings with host Steve Curwood.

CURWOOD: Though so many of us now live urban lives, without farmers and gardeners we would all go hungry and without the multitude of butterflies, bees and other insects and birds that pollinate our crops, much of our food wouldn’t grow. But pesticides, habitat loss, chaotic weather and climate disruption are all putting pressure on pollinators, and that prompted a group of scientists from around the world to make an assessment. University of Maryland Biology Professor David Inouye is one of the authors of the new UN-sponsored global survey on pollinator health, and joins us now from his research station in Colorado.

INOUYE: About one out of every three bites of food that we eat is brought to us courtesy of that process of pollination by pollinators, and so your diet would be much plainer if you didn't have access to all those fruits, berries, nuts and vegetables that are the product of pollination. 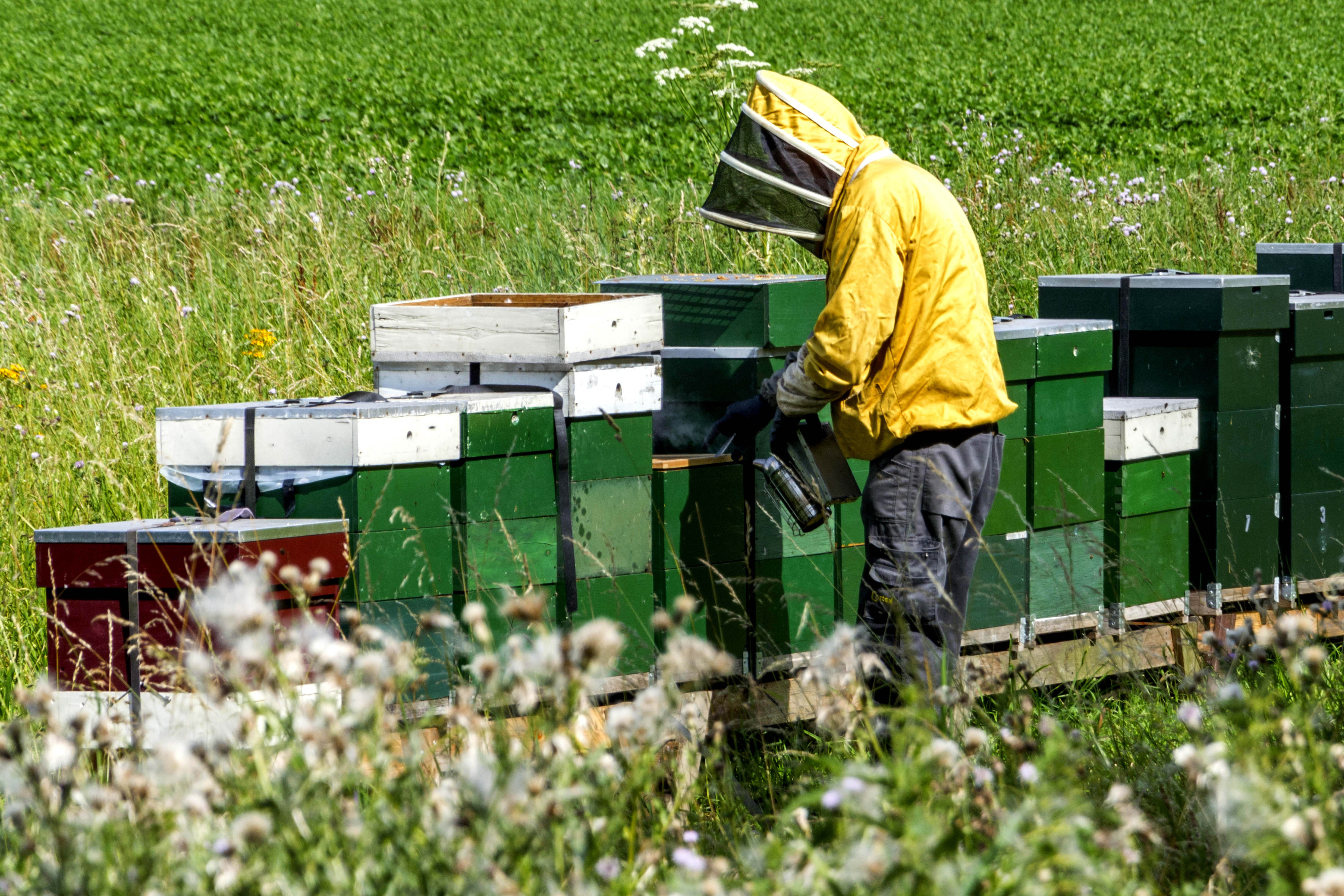 Beekeepers around the world and their hives are affected by colony collapse disorder; a mysterious phenomenon that David Inouye says could be the result of a variety of causes. Among the suspects: pesticides, including neonicotinoids, parasitic mites, and climate disruption. (Photo: Paul van de Velde, Flickr CC BY 2.0)

INOUYE: Well, one of the things that we learned was that we've got a lot left to learn. Although there've been a lot of good studies of pollinators and the process of pollination here in the United States, also in Canada and to some degree in Mexico, there's also a lot known about Europe and pollinators there but in Asia and South America and Africa there's very little known about A: who the pollinators are and B: what they're pollinating and C: how they're doing. So one of the things that we've done is to issue a call for trying to broaden the areas where pollinators are being studied so that we do have a better idea of the global status. It's surprising how little we know about some of the pollinators of what are important crops for humans around the world.

CURWOOD: Now, where you do have information, where are pollinators in trouble?

INOUYE: Well I guess one the stories that many of the general public have heard is about what's been called Colony Collapse Disorder of honey bees. Now, honeybees are not native here in North America. They were introduced starting in about the 1600s and in large part they're managed, so beekeepers have apiaries whether they've got these bees in hives and they're managing these bees trying to make sure that they're healthy, moving them around - for instance, out to California where they were pollinating almonds last two weeks - but honeybees are in trouble because of some of the diseases that have been brought in unintentionally by some parasitic mites have been brought in unintentionally and are causing real problems for them and some of those diseases and parasites are apparently starting to spread onto some of the native pollinators, some of the native bees. Native pollinators also face problems such as the use of pesticides either misuse or even just their use as directed can cause some problems for native pollinators and then loss of habitat. So, there are a number of issues and then perhaps superimposing all of those is climate change, which is turning out to have issues or cause problems for pollinators. 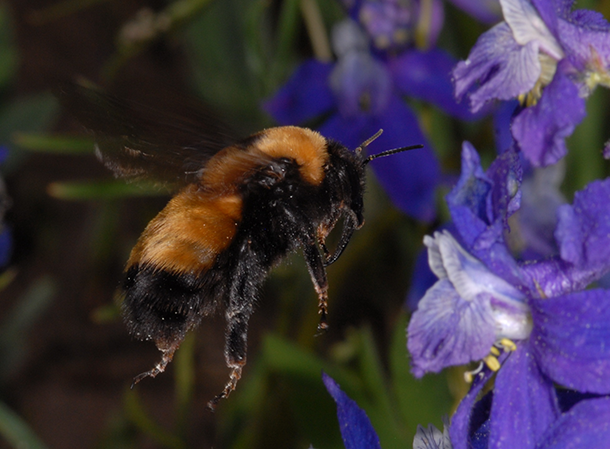 CURWOOD: Honeybees are in trouble. What other major pollinators around the world are doing badly at this point? 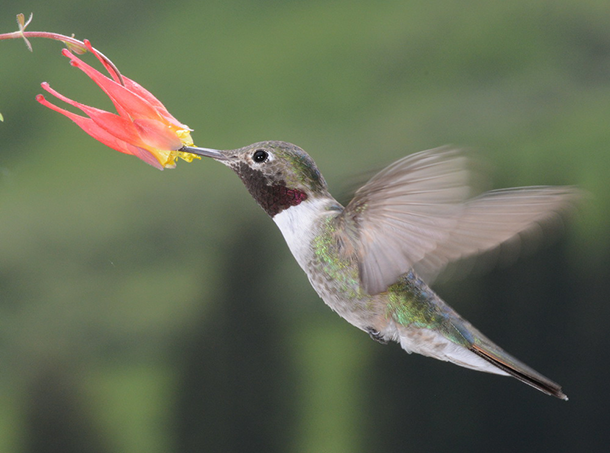 A male Broadtailed Hummingbird in Colorado visits a flower of the red columbine (Photo: David Inouye)

CURWOOD: Professor Inouye, how much of a pollinator crisis are we facing around the world? How worried should we be about this in terms of not only our food supply but also the ecosystems throughout nature?

INOUYE: Well, we do know that we seem to be entering a sixth mass extinction event on the planet and that this one seems to be largely the result of human activities, and pollinators are not immune from that. We do know that some pollinators have gone locally extinct and in some cases they're very specialized relationships between pollinators and the plants they visit. For instance, each species of fig, and there are a number of different species of fig trees, has its own specialist wasp pollinator and so if that wasp pollinator becomes extinct that fig species may go extinct. And there are other wildflower species that also have quite specialized relationships with pollinators. Those are the cases that we're going to have to worry most about.

CURWOOD: So what can we do to better promote pollinator health around the world? 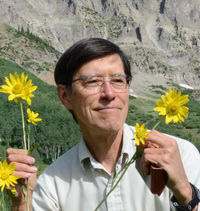 David Inouye is a biology professor from the University of Maryland and a co-author of the recent report on global pollinator health. (Photo: courtesy of David Inouye)

INOUYE: Well the good news is that we are recognizing that there are these problems and that in many cases these problems can be solved without a tremendous expense or tremendous effort. So, for instance, regulating the international trade of bumblebees or even within North America, restricting the trade so that bumblebees that were originally native to the eastern United States are not being shipped to the western US and and vice versa. Another thing that we can do is recognize that whether it's in our own yards or in agriculture that some of these pesticides are causing problems for bees and try to be more careful about their application or try to minimize their application or find alternatives to them. Another thing that we've learned is that even in urban areas there can be surprising numbers of pollinators, a surprising diversity of bees will do quite well in urban areas as long as they have access to flowers, and so if you're willing to take a little time and plant some appropriate wildflowers in your gardens or even in your yards in urban areas that can be a big boost to pollinator populations.

CURWOOD: David Inouye is a Biology Professor at the University of Maryland and one of the authors of the new UN-sponsored global survey on the help pollinators. Thank you so much, professor.

INOUYE: Thank you very much.

David Inouye is a Professor at the University of Maryland