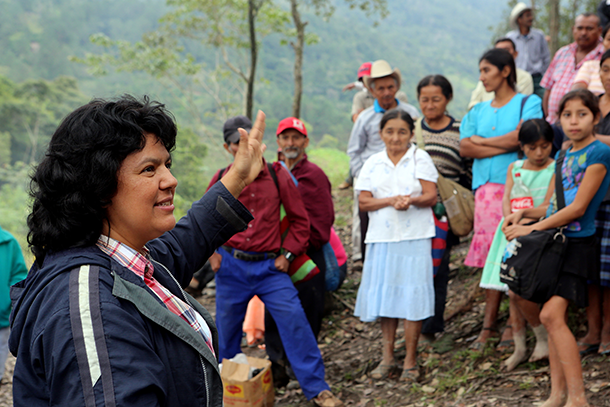 Berta Cáceres, an indigenous activist who opposed huge dam projects in her native Honduras, was recently murdered in her home. This draws attention to dangers that environmental activists in her country face. Billy Kyte of the British NGO global witness tells host Steve Curwood that she was one of the bravest people he’d ever met and that Honduras is among the most dangerous countries in the world for environmental campaigners.

CURWOOD: From the Jennifer and Ted Stanley studios at the University of Massachusetts Boston and PRI, this is Living on Earth. I’m Steve Curwood. On March 3rd, Honduran environmental activist Berta Cáceres was shot dead in her home by gunmen. Local police claimed at one point it was a robbery gone wrong, but many human rights and environmental campaigners are calling it an assassination. Berta won the prestigious Goldman Environmental Prize in 2015 for her work as part of a movement that opposed the Agua Zarca Dam projects on the Gualcarque River, which would have cut off her Lenca people from water and food. In her acceptance speech for the Goldman Award she spoke of the importance of indigenous peoples to environmental protection.

TRANSLATION: In our worldview we are beings who come from the Earth, from the water, and the corn. The Lenca people are ancestral guardians of the rivers, in turn protected by the spirits of young girls, who teach us that giving our lives in various ways for the protection of the rivers is giving our lives for the well being of humanity and of this planet.

The Gualcarque River has called upon us, as have other gravely threatened rivers. We must answer their call. Our mother Earth, has been militarized, fenced-in, and poisoned — it’s a place where basic rights are systematically violated—demands that we take action. Let us build societies that co-exist in a just and dignified way that protects life.

CURWOOD: She concluded her speech with a call to action.

CÁCERES(IN SPANISH) I dedicate this award to all the rebels out there, to my mother, to the Lenca people, to the Rio Blanco, and to the martyrs who gave their lives in the struggle to defend our natural resources. Thank you very much. 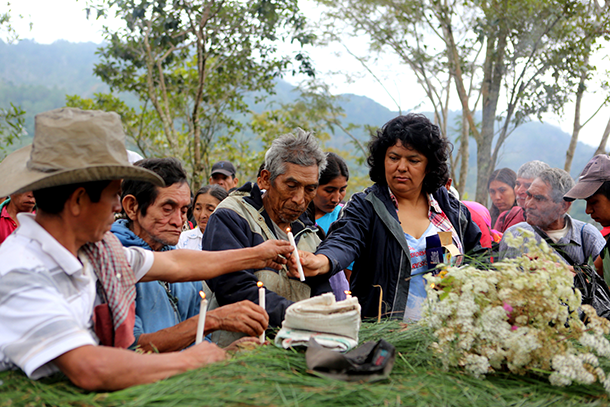 CURWOOD: Berta Cáceres’ murder has been met with protests worldwide at the Honduran government’s failure to protect her. But sadly, the killing of environmental activists like Berta is rampant. The UK environmental organization Global Witness reported that Honduras is the most dangerous place in the world to fight for the environment. We’re joined now by Billy Kyte from Global Witness, who knew Berta Cáceres.

KYTE: She was incredibly brave, probably the most fearless person that I've ever met. I first met in incongruous surroundings of a disused petrol station in central Tegucigalpa, the capital of Honduras eating a burger. And despite all the threats against her life, the fact that some of her family were living in exile in Argentina, despite seeing colleagues of hers being killed, she still never strayed from her struggle and her cause which is a simple exercise of rights for her community.

CURWOOD: Tell us a bit about what Berta Cáceres was fighting for?

KYTE: So, Berta represented the Lenca people, the indigenous group living in Honduras. The main cause that she was fighting for was against a huge dam project on her land, the way it was a water source for her community, the way of life for the Lenca people in the area. And over the years of campaigning against this dam project where all they were asking for was to be consulted on what would happen on their land, she received numerous threats, which ultimately ended her life.

CURWOOD: What kind of threats did she receive?

KYTE: She was constantly threatened by police in the local area, also by private security guards who were defending the dam project who were employed by Desa, the Honduran dam company. She also received threats via the Honduran state. They put spurious legal charges against her and her organization as well as not doing what they are required to by law, which is to give emergency protection. She had emergency protection from the Inter-American Human Rights Commission, but the numerous occasions that I spoke to her she said that this was not being properly implemented by the Honduran government.

CURWOOD: What relationship if any do you know there was between the Honduran government and the people who wanted to put up this dam?

KYTE: So we know that the Honduran government let it happen, even though under international law Honduras has signed an agreement, which supposedly guarantees the rights to indigenous people to make a decision on what happen on their lands - and this never happened.

CURWOOD: And how has the government responded to her death now? 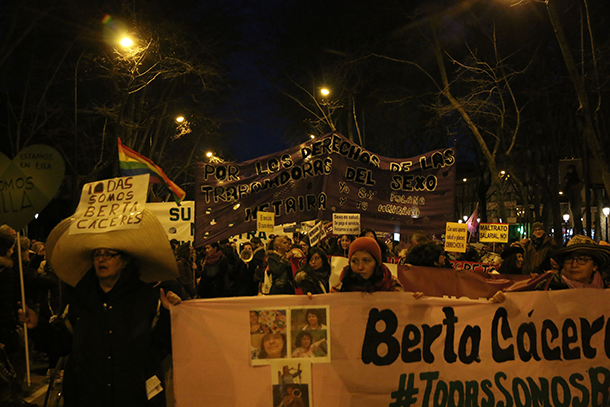 KYTE: At first, they tried to claim that it was a botched robbery. They've since come out and tried to also frame it as a crime of passion, but because of the huge international pressure on this case, they have relented and they've recently asked for the United Nations to support and accompany the investigation. I also understand that the US law enforcement agency’s closely supporting the investigation, and it's not an exaggeration to say that the world's eyes are watching Honduras right at this moment.

CURWOOD: Berta wasn't the first activist killed in Honduras. How dangerous is Honduras for environmental campaigners these days?

KYTE: So, from our research at Global Witness, Honduras is the most dangerous place per capita to be an environmentalist, 101 people were killed between 2010 and the end of 2014 just for defending their rights to the environment or their rights to land. One of the biggest conflicts of being over a palm oil plantation in northeastern Honduras which has led to 80 deaths of small scale farmers protesting, trying to get their land back from a large palm oil corporation. So we know that it's a mix between state’s and corporate interests behind a lot of these killings.

CURWOOD: How did Honduras get so dangerous for environmental activists?

KYTE: One of the main reasons is that in recent years the right wing government led by President Hernandez has sought investment in hydropower, mining, agribusiness and logging projects. Many of these projects go about without proper consultation of communities, of indigenous peoples, people are not being allowed to decide what happens on their land. Corruption is also a big driver behind a lot of these projects going ahead. There is another huge issue around impunity, the fact that people can get away with murder in Honduras.

CURWOOD: Billy, where else in the world are environmental activists seeing threats on their lives? 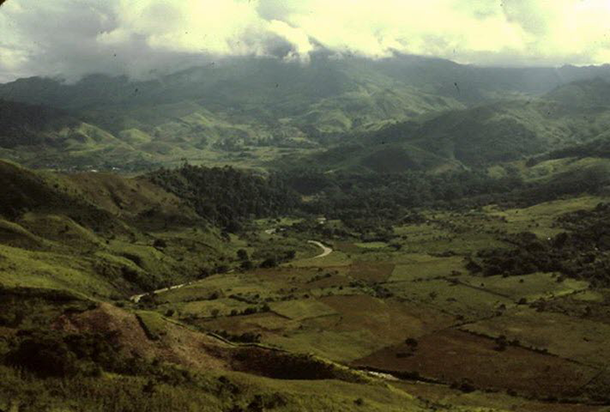 KYTE: So, from our data from Global Witness, in 2014, three quarters of all killings of environmental activists took place in Latin America. Now, this could be because civil society movements in that area are relatively strong, so there's more monitoring of the problem and the issue and they're more likely to protest or campaign against what's happening there, but it's also because of the area being very resource rich with high levels of corruption and an unequal distribution of land. So, many marginalized communities such as indigenous people are being impacted. Apart from Latin America, Southeast Asia, particularly the Philippines, has always been hard hit by and crimes against environmental activists.

CURWOOD: What other countries in Latin America are especially dangerous for environmental campaigners?

KYTE: So Honduras is per capita the most dangerous place to be an environmentalist, but Brazil in absolute terms has the most victims, with 400 people killed over the last ten years or so in Brazil. Colombia is also an area where the mining sector has being a focal point for many protests and campaigning and has led to killings. And most recently in Peru last year, there have been big mining protests, which have caused killings of environmental activists in Peru.

CURWOOD: What needs to happen to protect environmental campaigners around the world?

KYTE: So firstly, people need to be held to account for these crimes. People are getting away with it and this must stop. Secondly, activists need to be protected. They need their governments to stop stigmatizing them, branding them as anti-development. Thirdly, we need to tackle the root causes. This means giving indigenous people the rights that are theirs under international law, ensuring that there is less corruption and more transparency in how a lot of these projects are given, and lastly we need to be monitoring the issue a lot better and raising it an international fora.

CURWOOD: Billy, there is a long list of people who have died protecting their environment: Chico Mendez in the Amazon, Ken Saro-Wiwa in Nigeria. Any hope that Berta's death could be a turning point here?

KYTE: Well, I think we've seen from the international outcry, this has really struck a chord within the international community. I just hope that something good comes from the tragic events. This needs to be a rallying call to really ensure that these activists who are at the front line of battle to save the environment should not be attacked and killed, but should be seen as heroes.

CURWOOD: Billy Kyte is a campaigner with the British NGO Global Witness. Thanks for taking the time with me today.


How Many More? Report from Global Witness on threats to environmental activists around the world

Open letter to the President of Honduras demanding an international investigation