Penguin Colony Uprooted by Ice in a Warming World 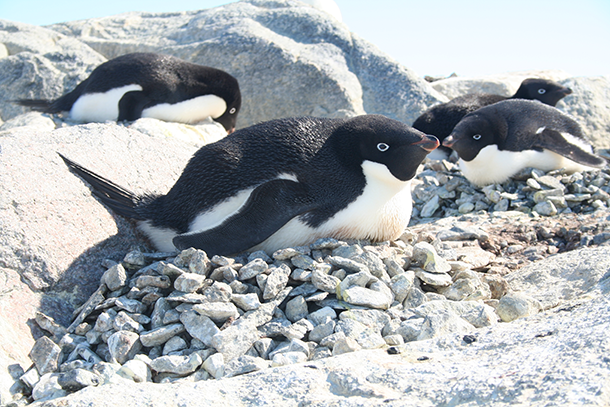 Researchers who study Adelie penguins in Antarctica returned to their study site to find most of the birds gone. This follows a massive iceberg blocking the colony from their feeding grounds. Penguin researcher Kerry-Jayne Wilson tells host Steve Curwood what she believes happened to the missing penguins and how climate change could be spawning more icebergs in the southern ocean.

CURWOOD: Well, an iceberg is key to our next story – about penguins. One long-established research team studies how Adelie penguins are affected by climate change in Antarctica. But when the scientists returned to the Cape Denison colony during the 2013-2014 Antarctic summer, they found just a tiny fraction of its former population. Kerry-Jayne Wilson is one of those researchers from Lincoln University at Canterbury in New Zealand and she explains what happened.

WILSON: In 2010, this giant iceberg, B09B, stranded about 60, 70 kilometers offshore from Cape Denison and over the next couple of years, fast ice formed, so it’s attached fast to the land, so that now the colony is isolated from the sea by 60 or more kilometers of fast ice.

CURWOOD: That meant that the penguins were cut off from their food supply and couldn't feed their chicks. I asked Kerry-Jayne to describe the Adelie penguin. 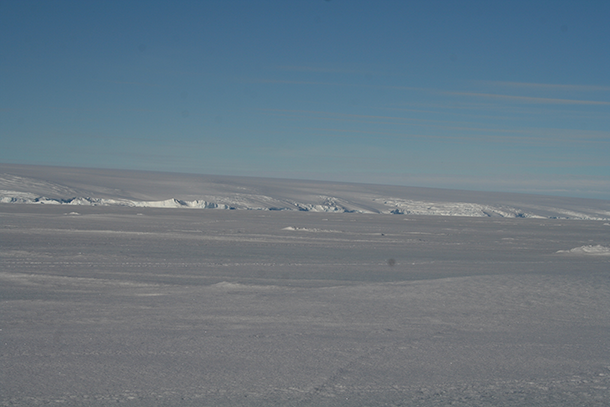 The Antarctic continent coastline. The sea ice in the foreground would usually be open water. (Photo: Kerry-Jayne Wilson)

WILSON: Well, it's your characteristic black and white Antarctic penguin, white on the front, black on the upper surface, black face and a very pronounced white ring around the eye.

CURWOOD: And how tall are they?

WILSON: They're about 60 centimeters tall and that's just above your knee.

CURWOOD: So what did you find when you went to the nesting area that the colony uses?

WILSON: Well, it was quite a shock. Adelies are very aggressive normally, and very active penguins. Normally when you're working with Adelies they will come at you if you get too close to the colony, hit you with their flippers, try biting you, and these are usually very noisy, and the colony was silent. They were very subdued, sitting quietly and hardly acknowledged our intrusion. There were far fewer penguins than we would have expected to be there, so a reduction of the numbers coming ashore to breed and the breeding success. 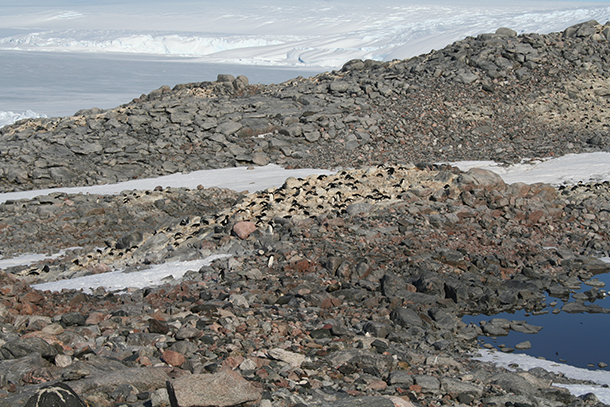 Adelie penguin colonies at Cape Denison. The fast (sea) ice in the background should be open water. Note the guano stained areas used in recent years but no longer used by nesting penguins. (Photo: Kerry-Jayne Wilson)

CURWOOD: What about the chicks that you saw? How old were they?

WILSON: We were there on virtually the day that hatching started. We saw a couple of just newly hatched chicks, but the chicks from last year were freeze dried - that's what happens in the Antarctic, anything dead will get freeze dried - and there were literally thousands, just almost a carpet of dead chicks around the colonies.

CURWOOD: Oh my. So, what do you think happened to the penguins that had been there? You say you saw just a few. Where did the others go?

WILSON: Well, that we don't know. It's highly unlikely that they’ve died. It's most likely that they didn't bother to come back and attempt to breed. The really clever ones assessed the situation, assessed it as a year in which they will fail, so why bother starting. The ones that aren't quite so clever have made the long trip to the colony and have attempted to breed and have failed, either at the egg stage or the chick stage. 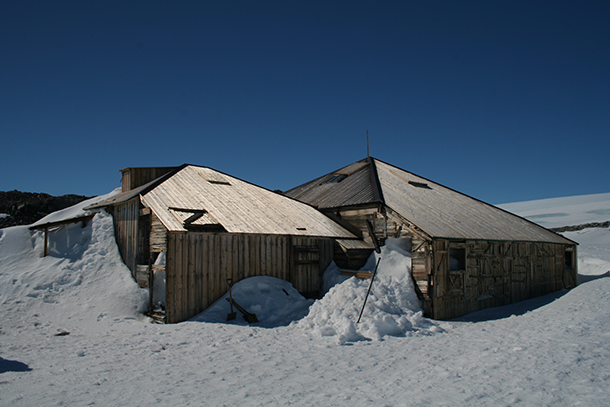 CURWOOD: So, if they didn't come back, where do you think they went?

CURWOOD: Really, how long can they live at sea?

WILSON: Oh, years. The only reason penguins come back to the colony is to breed. So, if it's not suitable to breed, then just remain at sea out on the pack ice. So ice floes, that are moving at the whim of the currents in the wind. Some may have gone to other colonies closer to open water, but my guess is that most just didn't bother and cut their losses.

CURWOOD: Kerry-Jane, there's been a lot of conflicting media coverage of this story, especially about whether the penguins died or moved on. How accurate do you think the coverage in general has been? 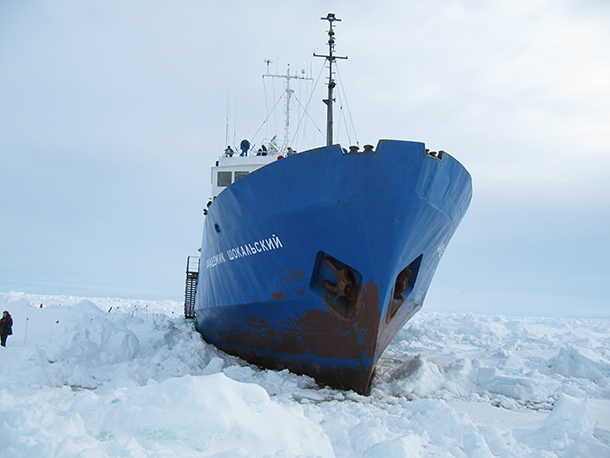 The Akademik Shokalskiy beset in pack-ice within sight of the Hodgeman Islands a few days after the researchers completed their penguin counts. The ship was stuck motionless in the ice for 10 days over Christmas and the 2014 New Year. (Photo: Kerry-Jayne Wilson)

WILSON: It's been really disappointing. I don't know where the 150,000 dead penguins came from, it didn't come from our paper. We did not suggest that adult penguins were being killed by this event. So some media outlet came up with 150,000 dead penguins and it's been repeated over and over and over again. And we have recently put a statement online correcting the misreporting of our work.

CURWOOD: Tell me, how well off are the Adelie penguins in general? How are they doing?

WILSON: Adelie penguins occur right around the Antarctic continent. In the northern most parts of continent on the Antarctic Peninsula south of South America. Adelie penguins are in decline due to climate warming. The water temperature is going up, there's less ice available. In the southern part of Antarctica around the Ross Sea region, Adelie numbers have been going up. Around the area that we were working, around east Antarctica, Adelie numbers tend to be stable, but the prediction is they will decline somewhat with changing pack ice conditions.

CURWOOD: To what extent do you think climate change played a role in this massive iceberg that blocked their ready access to food there at Cape Denison? 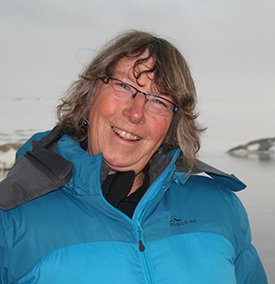 WILSON: Well, the Antarctic is warming. It's still very cold, but it has warmed by a degree or so, and that causes the ice on the continent to move off the continent faster. So around Antarctica there are some huge ice shelves, these are floating shelves of glacier ice. And from time to time, icebergs break off the ends of these. What we believe at this stage is that the breakoff of mega-icebergs is becoming more frequent. So what we believe is going to happen in the next century or so with climate warming is an increase in the frequency of these dire events.

CURWOOD: Kerry-Jane Wilson is a retired lecturer of ecology at Lincoln University in New Zealand. Thank you so much for taking the time with us today.


Journal article, “The impact of the giant iceberg B09B on population size and breeding success of Adélie penguins in Commonwealth Bay, Antarctica”

“Death of a Colony”: the research team’s statement on media coverage

About the Adelie penguin