Does Climate Change Cause Extreme Weather? 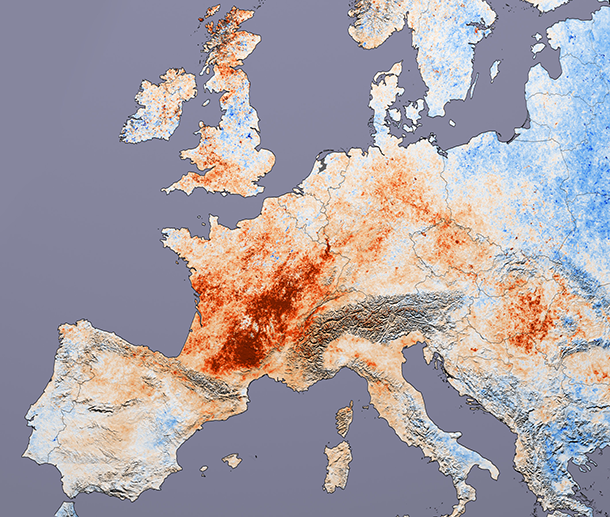 Europe’s devastating heat wave in 2003, shown with data gathered from July 1st to 31st. Dark red indicates areas where temperatures were 10 degrees Celsius above normal. Heat waves are among the easiest weather events to attribute to climate change. (Photo: Reto Stockli and Robert Simmon / NASA, based upon data provided by the MODIS Land Science Team)

Scientists have long avoided attributing specific extreme weather events to climate change, but a recent report from the National Academies of Sciences, Engineering and Medicine suggests that some extreme weather events can be attributed to climate change with a high degree of confidence. Host Steve Curwood talks with Penn State professor and former Navy Admiral David Titley, chair of the report’s committee.

CURWOOD: It’s Living on Earth, I’m Steve Curwood. Even as the weather becomes increasingly unpredictable, and extreme events become increasingly frequent, it’s considered scientifically incorrect to pin the blame for any one flood or drought or freakish snowstorm on global warming. But a new report from the National Academies of Science finds that it is now possible to estimate the influence of climate change on some types of extreme events, such as heat waves, drought, and heavy precipitation. We called up Retired Admiral David Titley, the former chief meteorologist for the Navy and now a professor at Penn State University, who chaired the committee that conducted the study. David, welcome to Living on Earth.

CURWOOD: So, just to be clear you not saying that we can now 100 percent link climate change to specific weather events, but what exactly does your report tell us? 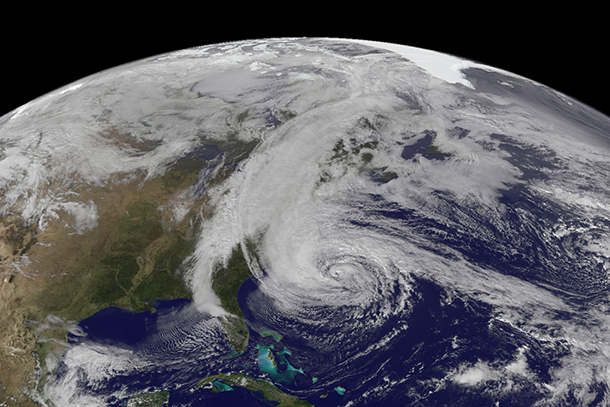 Hurricane Sandy bears down on the Eastern seaboard, October 28th, 2012. Hurricanes are among the most difficult weather events to attribute to climate change. (Photo: Robert Simmon / NASA Earth Observatory, with data courtesy of the NASA/NOAA GOES Project Science team)

TITLEY: So, we were asked to look at the science of attribution of these extreme weather events to any climate change and our report found that for some specific extreme events especially those that have to do with temperature such as heat waves and cold, or really lack of cold, we really have quite high confidence that for many of these specific events, we can state a link. For some heavy rains and flooding events, we can make that assertion with medium confidence. Hurricanes and typhoons, less confidence, and then by the time we get down to things like tornados and hailstorms, really almost no confidence in that.

CURWOOD: So, when you’re talking about an “extreme event,” it’s extreme because, what, it happens more often? It’s bigger?

TITLEY: So, extreme, could be, like, this is a one-in-a-hundred event. Extreme could be, in a 30 year record, maybe you’ve never seen this or only rarely seen this kind of event. There can be different definitions of exactly what is the criteria for “extreme,” but one thing they all contain in common is that, by definition, these are very, very unusual events. 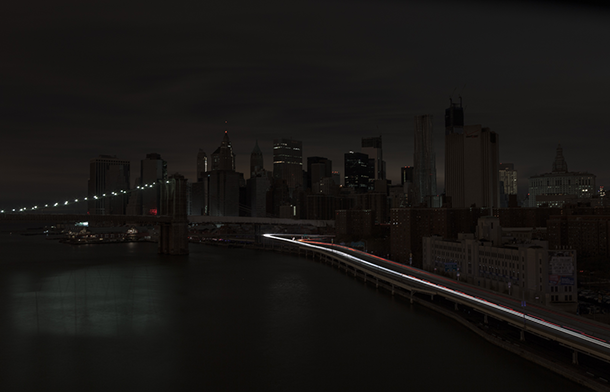 CURWOOD: So why is it relatively easy to link, say, an extreme cold event, or extreme heat event, to climate change when it's just too hard to link something like a tornado or, say, a wildfire?

TITLEY: There are really three components that go into determining, you know, how confident scientists can feel when attributing these specific events, and I sort of think of it as a three legged stool, and the first leg is the physical understanding. Do we really understand how climate impacts that particular type of event? For heat, that's pretty easy. The fundamental physics of greenhouse gases are very, very well understood. On the other extreme, on the physical understanding, there's very little understanding of how climate may or may not affect a specific tornado or hailstorm. I mean, we just simply, we don't know. The second leg is, do we have long-term observations? Do we see these extreme events occurring more or less? And that is, you know, pretty good evidence if things are changing, if I have a good observational record. And the third and final leg of the stool is, can climate models accurately replicate or reproduce these extreme events? So, do we have the resolution, do we have the physics, all that kind of stuff that goes into these big climate computer models, and if the answer is “yes” for all three, like it is for the temperature related, the cold and the heat, we really feel quite confident.

CURWOOD: Let's go back to 2012 when Hurricane Sandy devastated so many communities along the eastern seaboard. How would event attribution change the response to an extreme weather event such as a Sandy?

TITLEY: Yes, so one of the things that I think our report makes clear is we're talking about the attribution of the hurricane itself. Now, if you start looking at the impacts of that storm, one of the, I think, almost indisputable climate related impacts is that the storm surge from Sandy came in on a higher baseline of sea level thanks to global sea level rise and it would've, let’s say, if Sandy had come in a century ago, and I think that answer is almost eight inches or so around the New York City area. As you get these very big surges they cross thresholds. It’s not just a little increment in the amount of damage they do, and of course a classic case for that is once you get to a certain level of water, you flood the New York City subway system. So when we talk about Sandy, I think it's important to realize that even if we cannot attribute the storm itself to climate, we sure know some of the impacts especially with surge on top of higher sea levels. It is a climate impact, and it is getting worse. 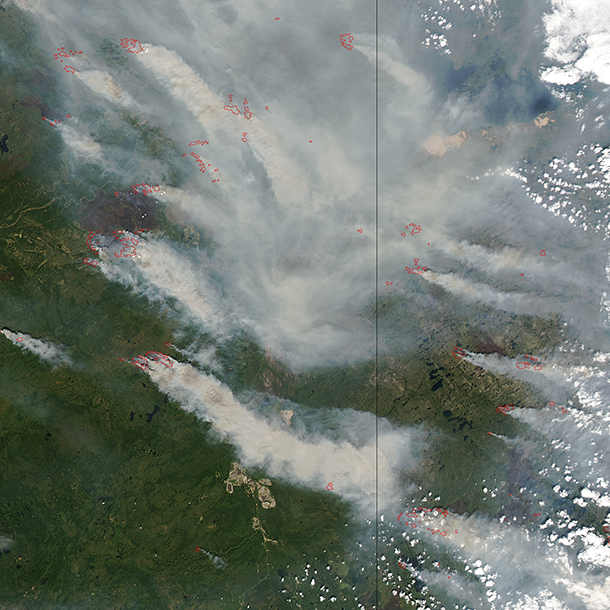 CURWOOD: Now, I know that some scientists who looked at your report said that this is great, but can you disentangle all this data? I mean, it's mishmash.

TITLEY: Well, it is quite complex, and any listener who is interested, if they actually go through our Chapter Four, we really talk in quite a lot of detail about each one of these specific types of events, whether they’re heat or cold or floods droughts, hurricanes, all the way down to tornadoes and regular everyday low-pressure systems. Each section really says, what do we know, what are the challenges and what are some opportunities for the way ahead? This is the first time that anybody has really tried to integrate this, and we are not saying that we can attribute every specific event to climate change - far from it - but we are also now not saying what many scientists, myself included, have said in years past of, while the climate is changing, we really can't say anything about any one event. So we're removing off that. If you, you almost think of, like this as is a baseball diamond, maybe we're down to first base now. You know, maybe we've, we've got off home plate, we're not just swinging at the pitches anymore, and maybe for heat we're even taken a look at second base there.

CURWOOD: Now, you're rounding first, huh? You're not just running over the bag.

TITLEY: For some events. Now, for the severe storms like the big thunderstorms and tornadoes, uh, we’re, we're still in the batter’s box.

CURWOOD: This improvement in understanding how climate change affects extreme weather events is clearly going to be very useful, but it is kind of depressing, if you think about it. We're getting better at estimating how bad, how devastating future weather events might be. What's the message of hope here? 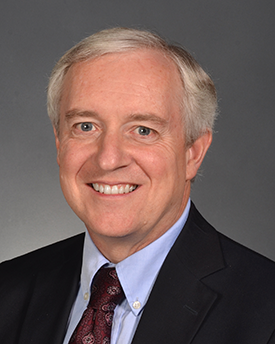 Adm. David W. Titley is a Professor of Meteorology and Founding Director of the Center for Solutions to Weather and Climate Risk at Pennsylvania State University. Now retired from the Navy, he initiated and led the US Navy Task Force on Climate Change. (Photo: courtesy of David Titley)

TITLEY: One of the things I get hopeful about is that we're seeing more and more different segments of society saying, “Guys, we need to pay attention,” all the way from people like Hank Paulson. I mean nobody's accusing Hank Paulson of being a bleeding-heart, tree-hugging liberal. He was, you know, Secretary of Treasury for Bush 43. He's a Goldman Sachs businessman, but he sees that this climate as a real danger. We have the medical community, increasingly the health community; we have the religious community, evangelicals who see that this is an affront on God's Earth. The insurance companies are increasingly seeing this as an issue, so I see, like, our report as just another piece of evidence. Some people may say, well, climate was kind of abstract, it was out in the future, but now I start to understand when I see a specific event that that really is in fact that early face of climate change. There is a momentum building, maybe not in all places in our political system, but in many other places that we're going to have to come to grips with this problem and the other part that really makes me optimistic is that, when Americans put their mind to it, we do incredible things. We've done that for World War II. We did that, like, say, for Apollo. Americans do amazing things when we are focused, and I truly do believe, and this is a belief system for me, but I believe that we will get focused in overcoming this challenge and providing a world that, you know, future generations will be happy to inherit.

CURWOOD: Admiral David Titley is the Founding Director of the Center for Solutions to Weather and Climate Risk at Pennsylvania State University. David, thanks so much for taking the time with us today.

TITLEY: Thank you, Steve. It was a pleasure being here.


Download a PDF of the report, “Attribution of Extreme Weather Events in the Context of Climage Change”

Commentary from one of the report authors: “Links between climate change and extreme weather are increasingly clear and present”

Center for Solutions to Weather and Climate Risk