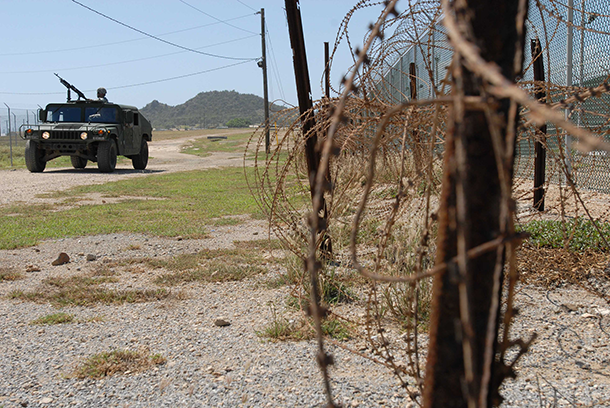 A novel idea proposes that if the detention facility at Guantanamo Bay is shuttered, the area should be made into a marine reserve. (Photo: The U.S. Army, Flickr CC BY 2.0)

This week features a proposal to turn Guantanamo Bay into a marine reserve, and reports of a low point for the number of U.S. oil and gas rigs in operation. Then Peter Dykstra and host Steve Curwood look back on the real-world Flat Earth Society.

CURWOOD: Time to travel beyond the headlines now. Peter Dykstra of DailyClimate.org and Environmental Health News, EHN.org, is our guide from Conyers, Georgia, and he’s on the line. Hi there, Peter.

DYKSTRA: Hi, Steve. You know what? Let’s not talk politics this week.

CURWOOD: Really, well, that’s fine with me. What’cha got?

CURWOOD: Wait a sec. I thought we weren’t going to talk about politics.

DYKSTRA: Well, how about talking about Guantanamo and butterflies, iguanas, and manatees. You know, like a lot of high security areas, the U.S. naval base in Cuba is designed to keep people out of much of its 45 square miles of land and the adjoining Guantanamo Bay, and this little corner of Cuba has become a wildlife haven. As relations thaw between the U.S. and Cuba, there’s talk about converting the base from a reserve for Marines into a marine reserve, where presumably the manatees at least would receive due process.

CURWOOD: Uh-uh, sounds like politics again to me. Let’s focus on the nature here. You know, we did a story about the pristine state of coral reefs in Cuba.

DYKSTRA: Yeah, there are other remarkable examples of wildlife thriving in off-limits places, including the Demilitarized Zone between North and South Korea and, amazingly, some nuclear weapons installations in the U.S. like Savannah River, South Carolina, and Hanford in Washington State.

CURWOOD: Those places are kind of hot with radioactivity. This is good for wildlife?

DYKSTRA: Portions of both sites are recognized as dangerously contaminated, but the sites are huge, and the bulk of the Hanford and Savannah River sites aren’t toxic. They’ve been off-limits for human activity for nearly half a century, allowing the wildlife to flourish. And the Savannah River site is home to a world-class ecological lab to study the undisturbed environment.

CURWOOD: Hmm, so out beyond those million-dollar cleanup sites there’s a Garden of Eden. What do you have for us next?

DYKSTRA: Steve, Baker Hughes is an oil field services company that’s also the go-to place for information on how many oil and gas rigs are in operation at any given time. It’s an indicator of what’s up and what’s down in the industry. Their numbers for February are out, and the U.S. oil and gas rigs in operation were at their lowest number in seven decades. The last time there were as few as 489 rigs in the U.S. was when Harry Truman was president, and we were just ramping down from World War II. 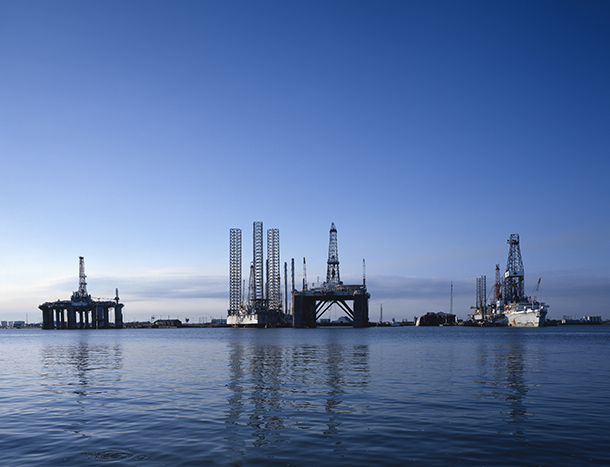 CURWOOD: So, I guess you could do the math here. This is the industry response to low prices and oversupply, huh?

DYKSTRA: Yeah, that would be a safe bet. Nobody’s really saying prices will skyrocket as production slows down, but this is a pretty good sign that the so-called “domestic boom” in oil and gas is either slowing dramatically or ending outright. It also makes the case to open up new oil and gas rigs, whether they’re offshore or on public lands in the Artic or on tar sands deposits in Utah, even more difficult. If oil stays relatively cheap, the oil that’s more expensive to extract is gonna stay in the ground. Just this past week President Obama reversed an earlier decision to offer oil and gas leases in the Atlantic, off the southeast U.S. coast. Governors of several states and, of course, the oil industry were pushing for it. Many coastal residents and, of course, environmental groups were pushing back, and they won.

CURWOOD: But, of course, the next president could change his or her mind. Hey, Peter, before you go, what have do you have for us from the history volume?

DYKSTRA: 15 years ago this week Charles K. Johnson passed away. Mr. Johnson is best known for reviving the fortunes of the International Flat Earth Society, by battling four centuries of heliocentric heresy. 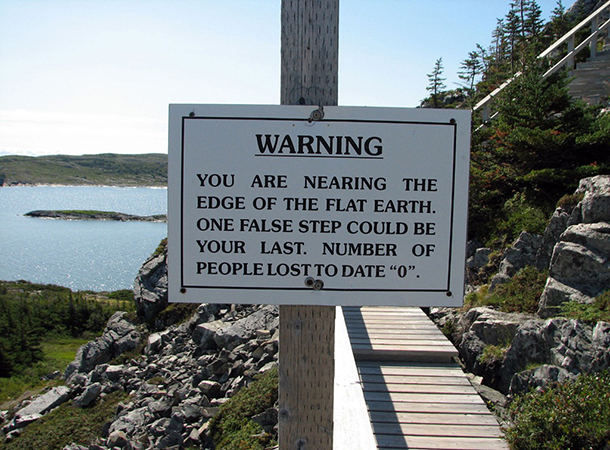 A sign on Fogo Island, off the coast of Newfoundland, pokes some good-natured fun at the now-defunct Flat Earth Society. (Photo: Douglas Sprott, Flickr CC BY-NC 2.0)

DYKSTRA: There was, and there still is, Steve. They had a dormant period after Mr. Johnson’s death in 2001, but roared back to life a few years later, pressing their case with a wide array of Biblical interpretations that I’m not gonna try to explain because I don’t understand them myself.

CURWOOD: But, wait, uh, there are centuries of findings from Copernicus and Galileo to NASA. I mean, doesn’t that research do the trick for those folks?

DYKSTRA: I’m sure Copernicus and Galileo and NASA all meant well, but sometimes faith is a hard thing to fight. Back in the 1890s a professor Orland Ferguson from Hot Springs, South Dakota, did a brisk business by selling maps of the flat earth by mail order and traveling the U.S., delivering lectures from town to town. I have a modern-day copy of Professor Ferguson’s map right here in my office.

CURWOOD: Hmmm, and I wonder if that crowd thinks that climate change is a hoax, too.

DYKSTRA: I would imagine if you don’t think the Earth is a globe, you can’t really believe that global warming is real.

CURWOOD: [Chuckles.] Peter Dykstra is with Environmental Health News, that’s EHN.org and the Dailyclimate.org. Hey, thanks, Peter. We'll talk to you again soon.

DYKSTRA: OK, Steve. Thank you. Talk to you soon.