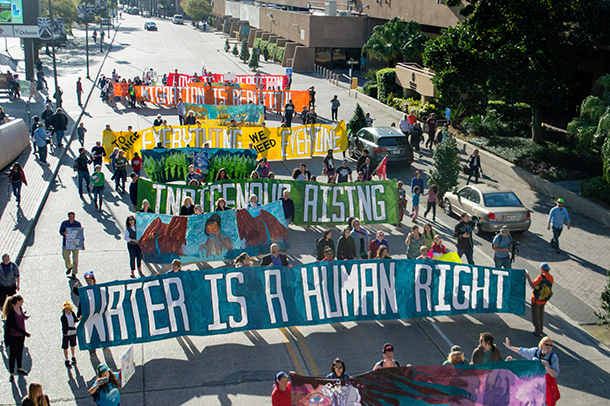 Louisiana has long been a friendly state to the oil and gas industry, but after the 2010 BP oil spill and Hurricane Katrina, Louisiana residents are more aware of the risks associated with the fossil fuel industry. Hundreds of people recently rallied at the Super Dome in New Orleans to protest the sale of new federal leases in the Gulf of Mexico for oil and gas extraction. Anne Rolfes of the Louisiana Bucket Brigade tells host Steve Curwood that the oil industry is losing its sheen in the Bayou State.

CURWOOD: Concerns about climate change have sparked a campaign to halt the leasing of public lands in the US for the extraction of fossil fuels, and recently protesters marched in New Orleans to demonstrate against a government auction of gas and oil leases in the Gulf of Mexico. Their rally at the Superdome also underscored local worries about oil spills, in light BP’s Deepwater Horizon well blowout six years ago, which spewed millions of gallons of oil into the sea. Joining us now is Anne Rolfes of the Environmental Justice Organization the Louisiana Bucket Brigade, who told us what happened at the protest.

ROLFES: We marched down the streets to the Dome. It was as if we were going to the Saints game, right? You walk into that Superdome, you're happy, you're hopeful...and even that process of marching in downtown New Orleans was an amazing experience in large part because that doesn't really happen in this part of the world. I mean, I've been working on the subject for 16 years and we certainly have not had many moments where we've had hundreds of people in the streets standing up to big oil. We did not anticipate that we would be able to get into the Superdome but we did, and so we went into that room and I think it is fair to say that we took it over. We went into the front, we stood on the podium. Yes, the Bureau of Ocean Energy Management was still at the microphone but they could not be heard over our din and we had a pretty basic message which was “the gulf is not for sale”. 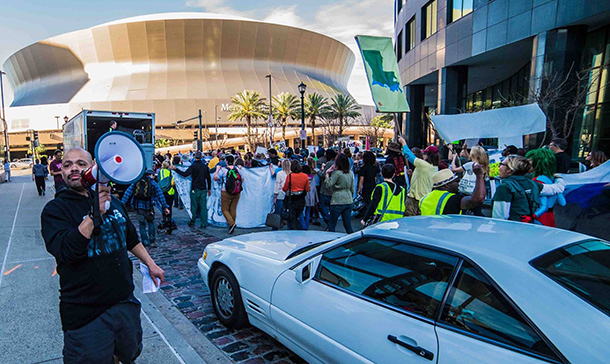 CURWOOD: So what kind of impact did your protest have on the sale?

ROLFES: Well, they were able to auction off all the plots that they wanted to auction, and so their spin was, you know, “what protest?” They honestly acted as if it didn't happen and I imagine that that's strategic to try and deter us from such actions in the future, but by any measure, this is a different day and those of us who participated in this understand that and understand that this is only the beginning.

CURWOOD: Now, you'd think that certain times and places if a crowd of people marching into a federal auction that police would show up, there would be a bunch of arrests and people would be hauled off. What happened to you?

ROLFES: New Orleans has Mardi Gras and so the police do know how to handle a crowd and I think they just used that approach. They asked me at one point, "Do you want to be arrested?" and I said: “No we don't want to be arrested, we want the drilling to stop.” I think that's often a dynamic in these situations with the police and with direct action. They say, "Do you want to be arrested?" Of course that's not our goal. Our goal is to stop drilling, stop Wall Street investment and fossil fuels. And so I think it was very much the laissez-faire attitude of this part of the world.

CURWOOD: You've had firsthand experience what happens when offshore drilling goes wrong. I imagine the police officers who were there also remember what happened in the gulf. To what extent do you think the BP oil spill cast a shadow over the sale and encouraged folks who might have been less patient with you to be perhaps more patient. 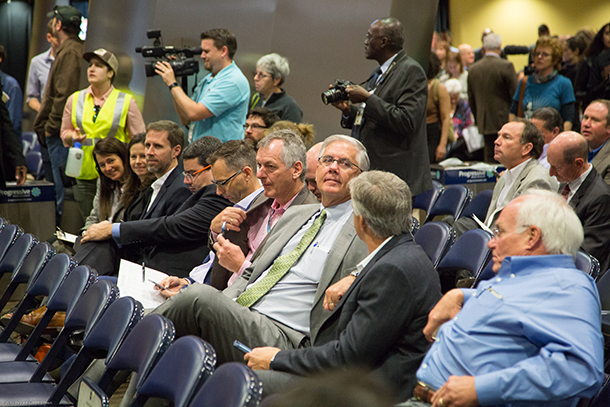 ROLFES: Well, I think that's a great point. To me there is a line before BP and after BP and I can tell you that absolutely changed attitudes. People who were willing to live with the oil industry before that aren't willing to live with it anymore, and so ordinary people, police officers, artists, students, teachers, yes, that's why we were out in force at the Superdome because it doesn't take a brain surgeon to see that we got a serious problem here.

CURWOOD: And by the way, oil and gas extraction has had a huge impact on the wetlands of Louisiana. Can you talk us a bit about that?

ROLFES: Yes, I mean one of most remarkable things about the oil industry's operations here in this state is that they're acting like it's the 1980s. They're saying the same things that they were saying then, pretending like they don't have a problem with accidents, pretending like their spills don't cause harm, and one of the greatest harms that they done to this state is they're digging of canals both for navigation but also to lay pipeline and even by their own studies, they're responsible for at least a third of the wetland loss and some accounts put it as high as 75 or 80 percent of our wetland loss. And so a result of that has been that they have physically dug out our land, which was our protection from storms and so one of the reasons that Katrina was so devastating is because of that wetland loss. The oil industries destruction of our coast makes us more vulnerable to every single hurricane that comes and one of the ironies is that the oil industry has a study that acknowledges this and yet in their own reports of Louisiana they show our state as it would have looked circa 1970, right, as if we have all of our wetlands, as if our state is really a boot like it used to be when really that boot has eroded.

CURWOOD: So then what has happened to the public mood in Louisiana about the oil industry in the face of Katrina, linked to the cause of wetlands I think in the public mind to a certain extent, to the Gulf oil spill, the Macondo well blowout there off of the Gulf of Mexico that was so devastating, BP's oils spill there, and now the threat of climate disruption, of climate change. How have these concerns and events combined to affect the public mood when you have a demonstration against more drilling in the Gulf?

ROLFES: I think that the public mood has been shifted for some time. Just in my conversations around the state, people who might have been on the side of the oil industry have shifted. I think what has though been the problem is that people think, “oh what can you do...they're huge, it's big oil...there's no way we can stand up to that”. And so, our work now is to have that opinion and those feelings manifested into action, and certainly the action at the Superdome was the first step to that.

CURWOOD: Now, of course, this isn't the first protest we seen of these kind of auctions. Tim DeChristopher famously was arrested and went to jail for buying at a lease, recently Terry Tempest Williams the author, bought land at the auction. Seems like this is all part of growing trend, huh? 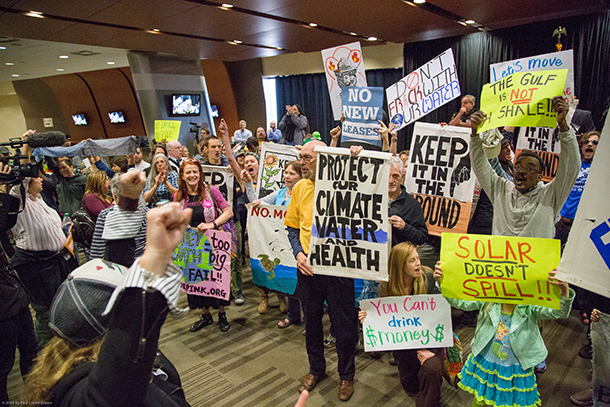 ROLFES: Absolutely. That's what's so exciting about it, is that we are part of the movement and certainly gives us a lot of power. I mean, we had a wonderful local and regional network of groups and of individuals who worked on this and we partnered with national groups and I think this is one of the rare times in which our interests are perfectly aligned. I mean, we have the same agenda, we're part of a movement, and that's why I always have faith, right, I always have faith, and my faith comes from the people that I work with who are from neighborhoods that have been decimated by oil pollution, and yet they have remarkable faith that they can beat the Exxons and the Shells of the world, and with that example, you know, I follow their faith that we can absolutely beat this and being part of the national movement makes me even more confident.

CURWOOD: Now Obama administration recently said that it will no longer pursue offshore drilling in the Atlantic coast. What you make of that decision?

ROLFES: Well, every news report I read about that decision chalked it up to activism, chalked it up to local resistance and what is instructive for our situation is that along the Atlantic coast you had a very similar situation. You had governors and senators and congressmen and elected officials at the national level and the state level who were buying big oil's story about job creation and being able to drill safely and encouraging drilling, but on the local level you had both local elected officials and regular people and business owners and people who enjoy the beaches saying, “no”. And local people and regular people prevailed despite their elected officials, and it's a very similar situation here.

CURWOOD: Why do you think the Obama administration is going to continue to permit drilling in the Gulf but not off the East Coast? What's different? 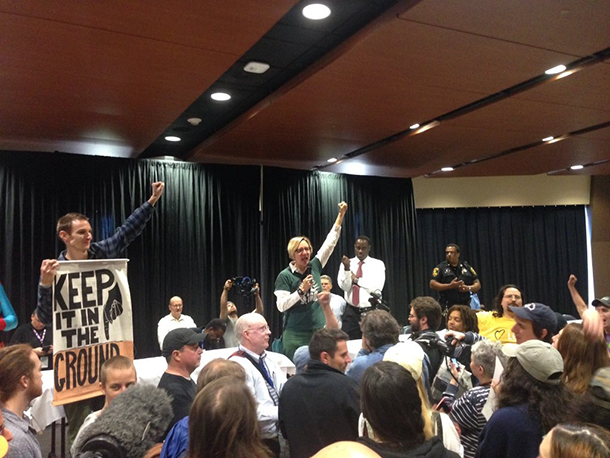 Anne Rolfes and others make their views heard on oil leases in the Gulf (Photo: LA Bucket Brigade)

CURWOOD: Well, so maybe there's been this push back on the west and east coast, but you seem to be leading a pushback right there in the gulf. It may be changing, huh?

CURWOOD: Anne Rolfe is Director of the Louisiana Bucket Brigade. Thanks for joining us.


About The Louisiana Bucket Brigade

Watch a video of Anne Rolfes' reactions right after the protest