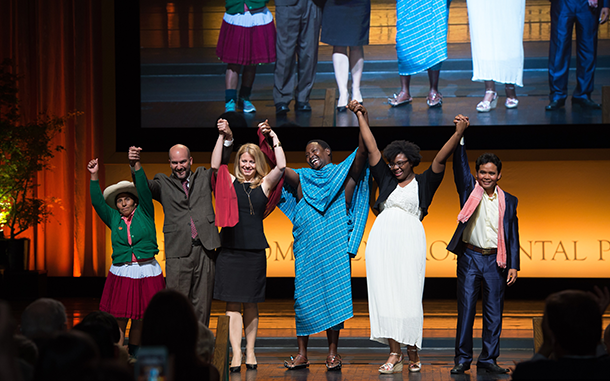 The 2016 Goldman Prize-winners on the stage in San Francisco (Photo: Goldman Environmental Prize)

The Goldman Foundation annually honors six activists from around the world who have fought for the protection of the environment. The murder of one of last year’s winners, Berta Cáceres from Honduras, has put this year’s awards in an even brighter spotlight. Host Steve Curwood profiles this year’s winner from Latin America, Máxima Acuña of Peru, who fought a proposed gold mine on her farm, at the expense of being sent to jail and having her house knocked down and her potato crop destroyed.

CURWOOD: It's Living on Earth, I'm Steve Curwood. The Goldman awards are perhaps the most prestigious environmental prizes on the planet – presented annually to 6 environmental activists from around the world who “demonstrate exceptional courage and commitment, often working at great risk to protect our environment.” This year’s ceremony took place on April 18th at the Opera House in San Francisco.

CURWOOD: Douglas Goldman started by honoring one of last year’s winners, Berta Cáceres of Honduras, murdered by gunmen just weeks ago. Berta won the Goldman Prize for her work resisting a series of dam developments that could have cut off her indigenous Lenca people from traditional access to safe water, food, and medicine. Douglas Goldman says that her death should be viewed as an assassination, and her life an inspiration to all those fighting for justice. 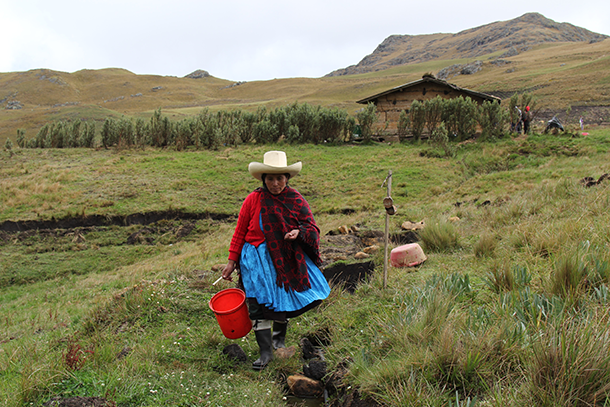 Máxima Acuña in her home in the highlands of Peru (Photo: Goldman Environmental Prize)

GOLDMAN: Berta was a gentle soul, however when confronted with the wrongs being threatened upon her indigenous Lenca people of Honduras, she was a fiercely determined fighter for that which is right. For her outspoken stance in defense of her people she was subjected to numerous and constant death threats. On March 3, those threats became a reality. As we continue with this evening’s ceremony we dedicate this occasion to Berta, and we retain the hope that such outrageous inhuman actions to unjustly stifle the defense of native peoples and their environments will once and for all cease. 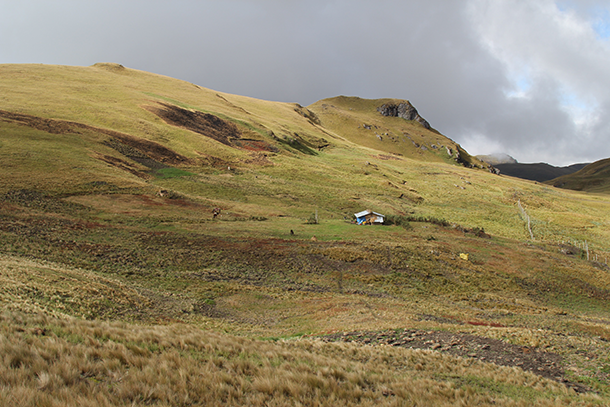 The Conga mine, if built, would drain four lakes in the region where Máxima lives. These lakes are the headwaters for important watersheds (Photo: Goldman Environmental Prize)

POETS: We will look for you in the villages of stars every night. We will listen for your voice like a whispering wind and hear your laughter in every crashing wave. WE WILL STAND FOR JUSTICE and feel our feet planted in every ounce of soil that we have always belonged to, knowing that we are safe, knowing that when you return to us we will become millions. Berta we will always carry you with us. Your resistance, your vision will continue to be passed on in every sacred drop of water that surrounds us.

CURWOOD: That was Erika Céspedes, Terisa Serigatonu, and Leslie Valencia performing part of their poem for Berta Cáceres. Berta’s presence was felt throughout the evening, but never more than when Máxima Acuña accepted the Goldman prize for her work resisting mining development in Peru.

In lieu of an acceptance speech, the tiny Peruvian woman sang a song. 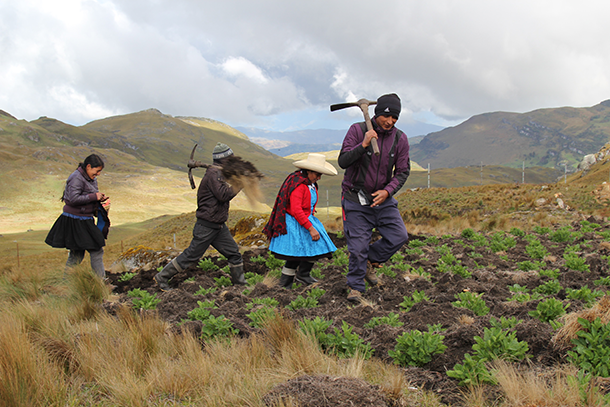 CURWOOD: “I am a woman from the highlands who lives in the mountain ranges.” she sang. Máxima Acuña is an indigenous farmer from the Cajamarca highlands of Peru near one of the largest open-pit copper and gold mines in the world, run by Peru’s Buenaventura and Colorado-based Newmont mining companies. In 2010 the companies tried to build a new mine 10 miles away, right in Maxima’s backyard. The project would have destroyed four mountain lakes, but Maxima stood in the way, refusing to leave her land. In 2011, armed men arrived, destroyed her house, and beat her brutally, then the mining company pressed charges against her, for allegedly squatting on the 60 acres she bought legally in 1994. She was sentenced to three years in prison. But she fought the conviction, and eventually won her freedom and the right to return to her land, where she grows potatoes and raises guinea pigs, sheep and cows. The mine is now on hold, but Maxima continues to face threats of violence and harassment, including the destruction of her potato crop.

MAXIMA (translation): That is why I defend the land, I defend the water, because that is what life is for. I am not afraid of the power of these corporations. I will continue fighting. This is for those who have died in Celedin and Bambamarca, and those who continue to fight in Cajamarca.

CURWOOD: That was Maxima Acuña, winner of 2016 Goldman Environmental Prize from South and Central America. 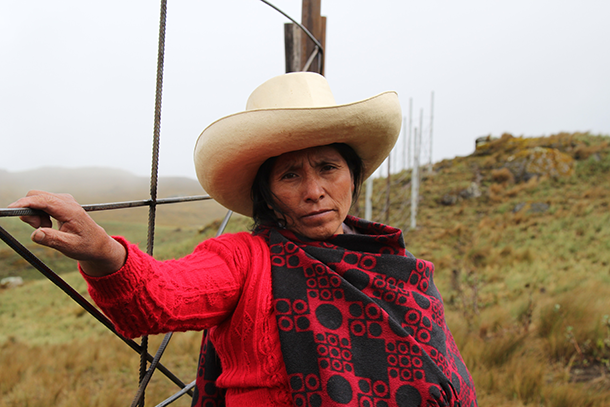 The mine is on hold, but Máxima continues to face threats and intimidation (Photo: Goldman Environmental Prize)


Read more about the Goldman Prize

Learn more about Máxima Acuña on the Goldman Prize website

Watch Máxima Acuña's song in lieu of an acceptance speech