The boom in natural gas released through fracking has bought new business and jobs to many communities, including some in Western Pennsylvania. But now oversupply linked to a mild winter means some of those businesses are going bust, as the Allegheny Front’s Reid Frazier reports.

CURWOOD: The catastrophic wildfires raging in the tar sands region of Canada have helped push up the price of oil in recent days, as companies there have been forced to stop operations. But natural gas prices in the US have slumped as the mild winter created an oversupply. Some companies drilling in Pennsylvania have laid off workers and shut down operations. That means big changes for some local economies. The Allegheny Front’s Reid Frazier has the story.

FRAZIER: At Jerry Lee’s Emporium in Waynesburg, Pennsylvania, there’s a handwritten sign on the front door.

EDWARDS: But this is mainly the heart of the business, fire resistant coveralls, pants, jeans and workpants.

FRAZIER: Before coming to Waynesburg, Edwards had sold his wares to coal miners in West Virginia, but that industry was suffering, so he moved north to Pennsylvania. Business was good for a few months. 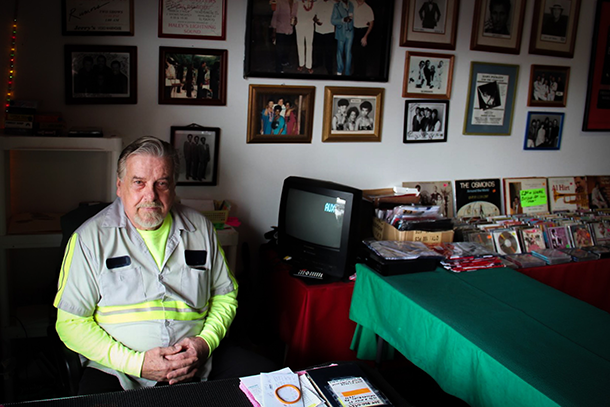 Jerry Lee Edwards, 73, sits in his Waynesburg, Pennsylvania store, where he sold work clothes to natural gas workers. His business, which is closing this spring, is one of the casualties of the slowdown in Pennsylvania's once booming natural gas industry. (Photo: Reid Frazier)

FRAZIER: Business got so bad, Edwards decided to close his shop this spring. A lot of others who have tied their fortunes to the fracking industry are having to make similar recalibrations. Low natural gas prices have led fracking companies to slash budgets and lay off workers; state records show Pennsylvania lost ten thousand jobs in the industry.

And it’s having an impact. Robbie Matesic is head of economic development for Greene County, one of the biggest drilling areas in the Marcellus Shale. Sitting in her office in downtown Waynesburg, she said the difference between now and a few years ago is audible.

MATESIC: My goodness in 2010, and in 2011, we wouldn't been able to have this conversation here so close to the street ’cause it just was constant traffic.

FRAZIER: Matesic said when the boom started about five years ago, there was an influx of workers into the county.

MATESIC: All of a sudden we saw most of the traffic that went thru this town was from Oklahoma, Texas, Arkansas, Colorado, Utah.

FRAZIER: The county benefitted from that activity. It’s gotten millions of dollars in drilling fees that have gone toward roads and bridges, sewers, and social services.

Matesic said locals also got jobs, with businesses that supplied the drilling rigs and pipeline crews. Restaurants and hotels were also full. And savvy local businesses began catering to oil and gas workers as they passed through.

KOVACH: We have six spots down here at the bottom… 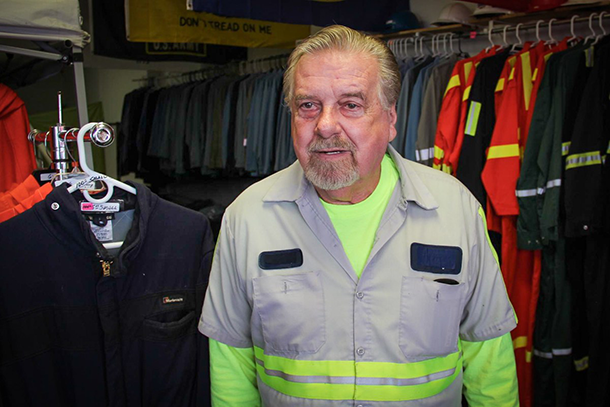 Jerry Lee Edwards stands in his once-thriving clothing store in Waynesburg, Pennsylvania. He plans on closing the store this spring after the slowdown in the natural gas industry. (Photo: Reid Frazier)

FRAZIER: Joel Kovach manages Rohanna’s Golf Course just outside Waynesburg. About five years ago, Rohanna’s added an RV park. The company cleared a patch of roadside and put in hookups for 30 RVs to cater to oil and gas workers. The spaces filled up. And for a while, they had a waiting list.

KOVACH: I’d say it was at least 10 to 15 spots deep. Those people needed place to stay.

FRAZIER: Today, only 8 of the 30 RV spots are filled. The rest of the lots stand empty.

KOVACH: It's been like this for probably 6 to 9 months now, to where there's not too many people.

FRAZIER: Kovach thinks business will pick up again in the future. As for Edwards, the shop owner who is closing up, he doesn’t think he can wait that long.

FRAZIER: He’s actually heading to the U.S. Virgin Islands, where he’ll work as a music promoter. It’s not a bad fallback. But for those sticking around in Greene County, most are getting used to what looks like the end of the boom times. I'm Reid Frazier.


Listen to the original story here