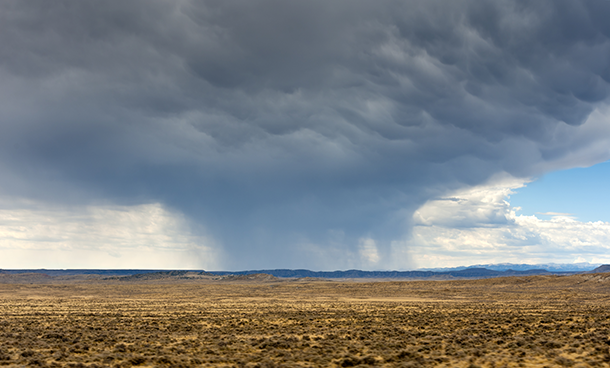 The overwhelming majority of coal reserves in the extensive Powder River Basin, located in Wyoming and Montana, are owned by the federal government. (Photo: Jeremy Buckingham, Flickr CC BY 2.0)

Climate activists are calling on the government to stop leasing federal lands and waters to fossil fuel companies, and new analysis from the Stockholm Environment Institute quantifies the impact that would have on reducing emissions. Senior Scientist Michael Lazarus tells host Steve Curwood that limiting the supply of fossil fuels can reduce the impacts of global warming.

CURWOOD: Thousands of climate activists across the globe this month have been protesting the continuing use of fossil fuels. In the US, they have blocked rail lines, protested at refineries and at a federal government auction of oil and gas leases. They point to the rise in US fossil fuel production, much of it for export, even as domestic consumption of oil, gas, and coal has been falling. Activists call for fossil fuels to be “kept it in the ground”, especially on public lands where the industry already leases over 67 million acres. To explain what it might mean for climate protection if the US were to stop leasing federal lands and waters for mining and drilling, we turn to Michael Lazarus, US director of the Stockholm Environment Institute.

I stopped by his office in Seattle the other day, and asked him to discuss a study his group recently completed that shows how much reducing the US supply of fossil fuel would lower world greenhouse gas emissions.

CURWOOD: So, what prompted you to look into this question of what it would mean to deny new leases of fossil fuels on public lands here in the US? 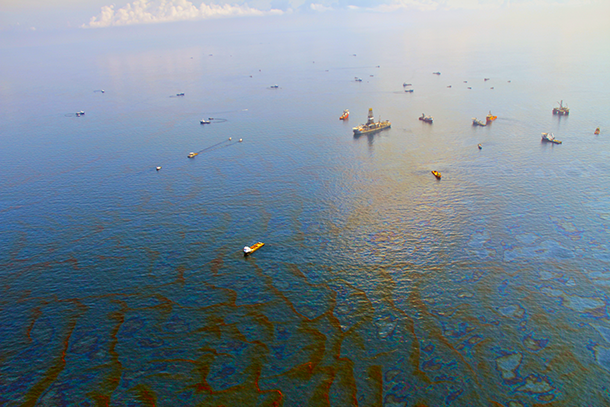 Environmental campaigners are calling for an end to oil leasing in the Gulf of Mexico, not just because of climate change, but the risks of oil spills like Deepwater Horizon. (Photo: Green Fire Productions, Flickr CC BY 2.0)

LAZARUS: Well we looked at that question as part of a broader question. What does it mean to continue to invest in fossil fuel production around the world? Because we think there's been a blind spot. For many years now we've been focused on how much fossil fuels we consume which is the major contributor to climate change, the combustion of fossil fuels, and we've done a lot to think about how we can reduce our consumption and develop alternative sources of energy like renewable energy that are low carbon. At the same time we kind of left the back door open over the past few years and fossil fuels, we thought, you know, they were going to run out. We had heard lots of talk about, you know, peak oil which perhaps was overdone but the idea was that we were running out of these resources about the same time as we were developing new ones. Well it turned out quite differently over the past 10 years. We've seen here in the US the boom in shale oil and shale gas production that was unanticipated 10 or 15 years ago. The problem is that, while that may be good for things like reducing oil imports, it also undermines our efforts to develop these other technologies. It undermines our ability to get people off of their addiction to fossil fuels.

CURWOOD: So set in context for me how important is fossil fuel production in the US compared to the rest of the world.

LAZARUS: Well, interestingly enough, now the US is the number one producer of fossil fuels globally. We're now number one in oil; we’re number one in natural gas, and we're number two in coal. And so in a sense we both have the opportunity to reverse direction a little bit here or make ourselves a little bit more consistent with our climate commitments which we've yet to do. We also have an opportunity to signal to the rest the world that we're serious about addressing both the consumption and production of fossil fuels.

CURWOOD: So when you looked at what it would mean for coal, oil and gas production, if the US stopped granting new leases and stopped renewing them, what did you find?

LAZARUS: We found two things. We found first of all that it would make a contribution towards getting us on a production, fossil fuel production, pathway, closer to the types of targets that we agreed to when Senator Kerry signed onto the Paris agreement just a few weeks ago, that is getting towards keeping global temperature increase to well below two degrees, ideally 1.5 degrees. That requires a reduction in US production, most likely of about 50-percent by 2040 and aiming towards zero in the second half of this century. Meanwhile, US fossil production has been growing and is projected to continue to grow even with the Clean Power Plan and so forth. So we found that you can begin to contribute to turning the corner on US fossil fuel production by ceasing these new leases, and we also found that doing so would lead to tangible emission reductions globally and in the US. 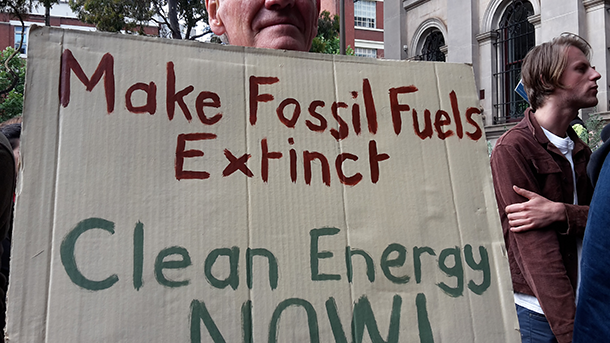 CURWOOD: What kinds of reductions are we talking about here?

LAZARUS: We're talking about for the year 2030, about 100 million metric tons of CO2 per year in reductions and increasing over time, as these new leases would have otherwise begin to produce more and more fossil fuels.

CURWOOD: A hundred million metric tons. Tell me what that means in lay terms.

LAZARUS: OK, a hundred million metric tons. The US every year today produces between six and seven billion metric tons of CO2. So we're talking about one or two percent of our emissions. So it's not the whole thing, but it's quite a significant contribution when you compare what you can do with other policies that have been enacted or may soon be enacted like the Clean Power Plan that would reduce emissions from the electricity sector, increased fuel economy standards for vehicles. Those policies range anywhere from 50 to 600 million metric tons per year of reductions on that same timescale.

CURWOOD: So why do you think that the question of looking at the supply of fossil fuel has been relatively ignored compared to looking at the demand-side? 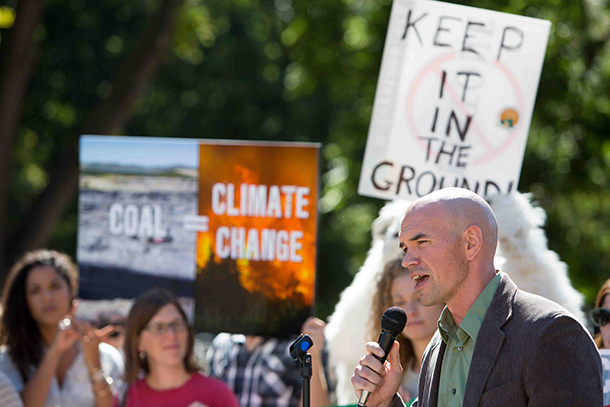 LAZARUS: It's politically challenging. You know the head of the OECD, an international economic organization that’s well-known, Angel Gurria, had this great speech of three years ago where he talked about this phenomenon of “carbon entanglement”. Carbon entitlement is sort of the dependency that the communities and countries have on the profits, the rents, the revenues, the royalties that are collected from fossil fuel production. And that dependency makes it very hard for countries to just engage in this question. You always want other countries to go first. It's another manifestation of this collective action problem that we have with climate change. We always wait for the other person to go first. Instead we need to turn that around, show leadership, and, because the world is getting increasingly serious about addressing climate, as we saw in the 170 countries signing on to the Paris agreement with its greater ambition, I think the tide is beginning to turn.

CURWOOD: And then to quote President Bush, the 43rd President of the United States, “we're addicted to oil,” and perhaps the prospect of having the supply reduced is scary to addicts.

LAZARUS: Indeed. Indeed, and so that's why it's all the more important to understand that there is something else out there that is a better life, as it were, without as much fossil fuels and we've seen that develop with the radical reduction in the cost of solar power. We're seeing it in communities that are showing that they can move away from fossil fuel use. We are affiliated with this Swedish Bay Stockholm Environment Institute, we are, and when I go there there's talk about a fossil free Sweden, and zero emissions there, and they've gotten a long way towards it. And so there are examples across the world of communities that are thriving, and that's in a sense how you break the addiction.

CURWOOD: So overall, Michael Lazarus, how optimistic are you that this approach looking at winding down the leasing of public lands for energy extraction will produce the desired results?

LAZARUS: Well, let's step it back to what are the desired results here, and I think the desired result in my mind is to develop a suite of policies that get us on a path closer to what we agreed to in the Paris Agreement, which is basically a phase-out of fossil feel use in the second half of the century. And if we are serious about that, then we need to begin phasing down fossil fuel production across the US. Federal lands and waters is an ideal place to begin thinking about that because the federal government has the authority, can set the signal. We’ve seen that further investment in fossil fuel production has led to great expansions in recent years of production. If we continue to do that, it makes it much harder to transition to renewable energy, to implement energy efficiency policies, so am I optimistic that, if enacted, measures like this? They, yes, they would get us far closer and they would close this sort of gaping gap between what we're doing to reduce the demand for fossil fuels and what we have yet to do and begin to think about in terms of reducing the supply.

CURWOOD: Michael Lazarus is the US director of the Stockholm Environment Institute. Thank you so much, Michael.

LAZARUS: Thank you, Steve. Great talking to you.